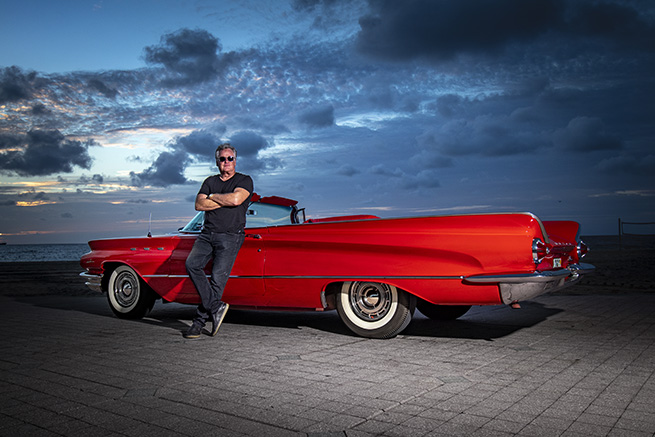 Jon Bon Jovi with his famous flowing mane gnawing at chicken wings and Mariah Carey trying to stay undercover while ordering off the menu were never moments Buddy Sherman thought he’d experience when he bought a one-way ticket to Fort Lauderdale and boarded a tired Greyhound bus. He had no plan. He just knew he wanted to get away from the frigid Toronto weather. The high school dropout, who says he was a “severe poster child for attention deficit disorder,” is now an embodiment of the American dream—an 18-year-old newcomer to Fort Lauderdale turned community legend running one of the oldest and most iconic raw bars in town.

It was 1979 when Sherman stepped off the bus and found a job making beds at the Lauderdale Beach Hotel. In a serendipitous series of events, he was on his way to mail a postcard home to his mom when a typical South Florida afternoon storm descended and Sherman sought refuge inside the Ocean Mist beach bar. With his postcard in one hand and a Miller High Life in the other, he took in his surroundings and listened to a fellow patron talk about Southport Raw Bar.

A few days later, intrigued to check out a new spot in this new town, Sherman walked from the beach, over the bridge and through the bar’s porthole doors for the first time. His eyes adjusted to the dim light as Van Morrison’s “Moondance” wailed on the jukebox. Pulling out a chair to sit at the bar, he ordered a Miller High Life and clam chowder with the few dollars he had in his pocket. The soup arrived in a petite plastic bowl but with a hefty side of crackers that he quickly mixed in to create a sort of porridge he hoped would fill him up. Savoring this seafood gruel for the first time, he spotted the tipsy talker from the beach bar—he was the bar’s cook, and he opened the door for Sherman to start as a busser.

Six years before Sherman stepped off that bus, two New Yorkers—Carmine Ferrante and Mickey Kirtman—who had also landed in Fort Lauderdale took over a small, dark raw bar with dreams of hospitality greatness. Over the years the friends expanded it to what it is today: a 250-seat waterfront quintessential old Florida watering hole where politicians, celebrities and socialites dine alongside fishermen, locals and tourists. 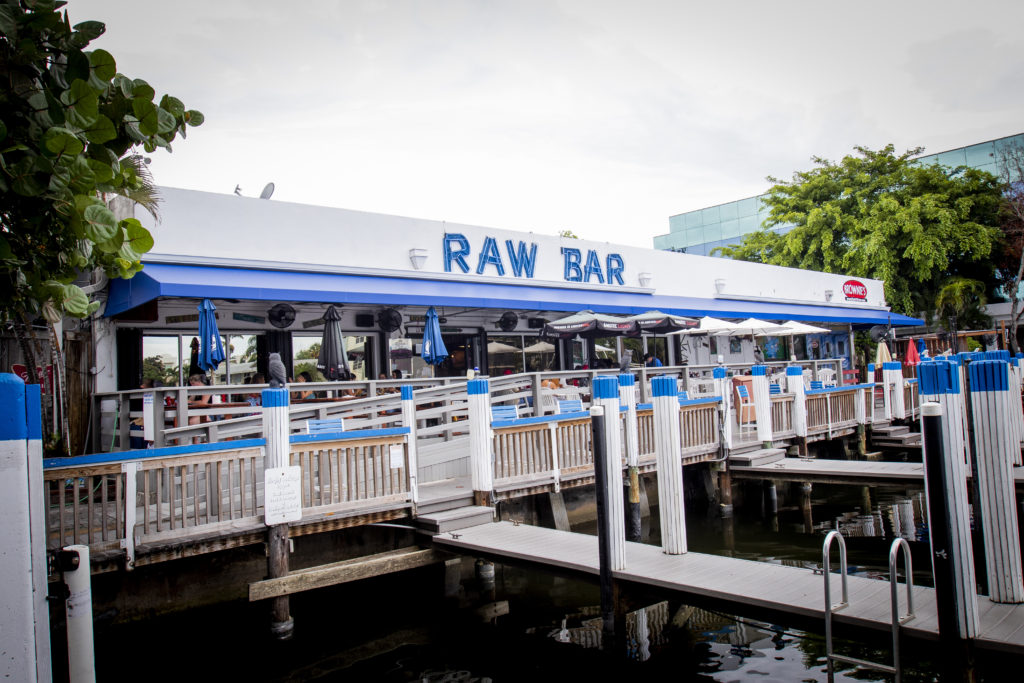 Southport Raw Bar has been a Fort Lauderdale institution for over 40 years. In that time, Buddy Sherman has gone from busser to bartender to boss.

In 1998 at 36, Sherman, now a manager, had worked his entire adult life at the restaurant and was ready to close his Southport chapter. Instead, Ferrante made him an offer, a percentage of the bar, ownership. A few years later, Sherman and Ferrante’s son Patrick bought the old regime out entirely. 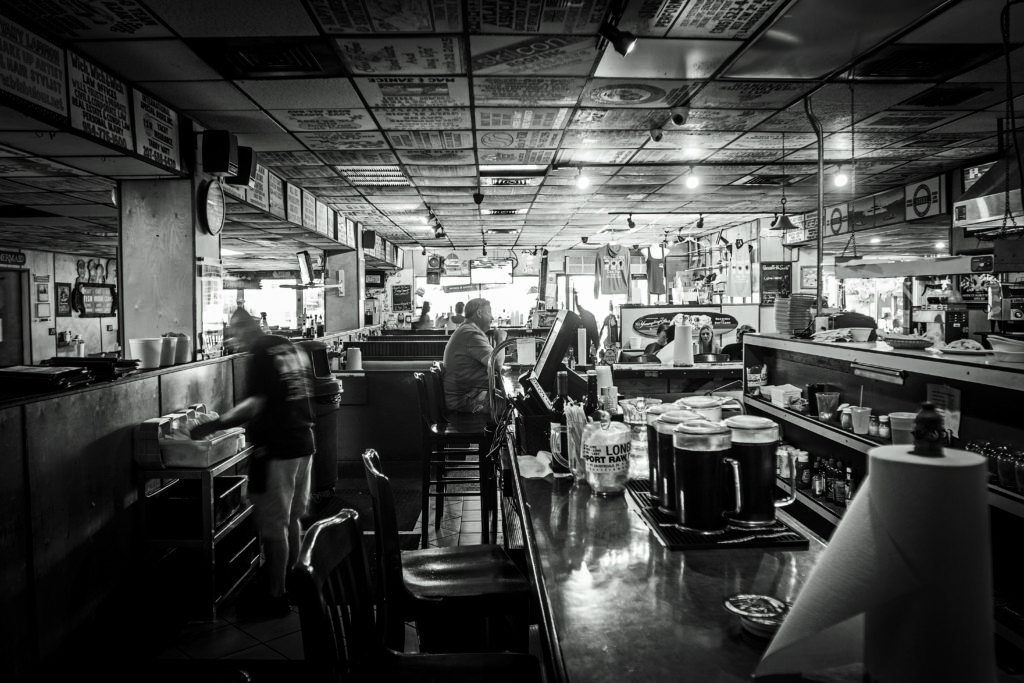 Southport Raw Bar hasn’t changed much in the past 40 years.

Sherman never had dreams to redesign the restaurant. “You don’t want to change an iconic place too much,” he says. As a young busser, he helped unload the booths that still line the wood-paneled walls. The ceiling tiles, which are still popular after more than 30 years, act almost like a diary of loyal patrons—a circle of life canopy of birth, business and bereavement announcements. The updates Sherman has made are inconspicuous, like obtaining a liquor license two years ago so he can serve piña coladas with dark rum floaters and replacing the old, dingy carpet with a similar shade. His aim is to keep Southport Raw Bar’s time capsule as intact as possible.

But there is one improvement that makes Sherman giddy: the creation of a new main bar. During a trip to Thailand, his wife’s homeland, he was swimming in Phuket’s turquoise waters encompassed by plastic garbage and was stunned. Inspired by this experience, he replaced single-use serving ware and straws with biodegradable options at Southport Raw Bar and began designing a new bar with a save the sea theme. Its façade, made from bamboo he imported from Thailand nearly 10 years ago, supports the large mahogany planks painted by artist Colette Pisut.

“I know this bar is going to be a part of my legacy,” he says. “It tells a story about saving our ocean without the preachiness of it all. The ocean has taken care of us for so many years; surely we can do a little something for it.”

While the 60-year-old has tirelessly worked at Southport Raw Bar, his journey has also been sprinkled with good fortune and good timing. Just like Sherman attributes an afternoon storm on the way to mail a postcard as the stroke of luck that introduced him to Southport Raw Bar, he similarly credits a fortuitous haircut at Big Bob’s Barber Shop as the reason he became the owner of the actual building that houses the restaurant. Sitting in the barber’s chair, he overheard a rumor that entrepreneur Wayne Huizenga had his eye on the building. Sherman approached Ferrante, who was no longer involved in the business but still owned the building, and offered to buy the building himself.

That business strategy saved the restaurant when the pandemic forced Sherman to close Southport Raw Bar’s doors last year. As his own landlord, Sherman was able to keep the business afloat and support his staff with daily grab-and-go meals that the managers prepared. The bar’s reopening was burdened with a strict evening curfew, so instead of cutting his staff’s hours, Sherman decided to open for breakfast, serving dishes named after the managers, like Mike’s French Toast and Herb’s Jumbo Breakfast. Even Sherman got in on the fun with Buddy’s Asian Fried Oyster Omelet, complete with spicy Sriracha mayo.

While Southport Raw Bar, like other businesses, struggled to get staff back to work, Sherman was sanguine and says most of them did eventually return. He has waitstaff who have been working with him for more than 30 years and cooks who have been shucking oysters in the kitchen for 20 years. He attributes this loyalty to the respect and care he offers them.

“I tell them, ‘I own the boat, but without you rowing the boat I’m just bobbing around in the ocean,’” he says. “I can’t build anything, I don’t play golf, but I’m a good listener.”

Née Robert, Sherman was nicknamed Buddy early in his life by his older sister Claudia. Growing up with a single mom, he learned to listen and be compassionate while being constantly surrounded by his mom and her friends who would vent and sip coffee after their waitressing shifts.

He listens to his employees alongside his patrons and says, “Our job is really to give people what they want.” And according to sales, diners are craving oysters and Old Bay peel-and-eat shrimp. On any given week Sherman buys 70 60-pound cases of oysters. When asked for more details, he pulls up the point of sale system on his phone and reports that on a typical Saturday in March, he sold about 3,000 oysters from raw to grilled, hawked about 300 pounds of peel-and-eat shrimp and hosted nearly 1,000 guests at tables, not including the two bars.

“I could sell it and go live in my house in Thailand and just be done,” he says. “The problem is all the memories and all the souls who have worked for me all these years.” Sherman proudly reminisces about children growing up sitting with their parents in the booths then bringing in their own babies, who he now helps into high chairs. 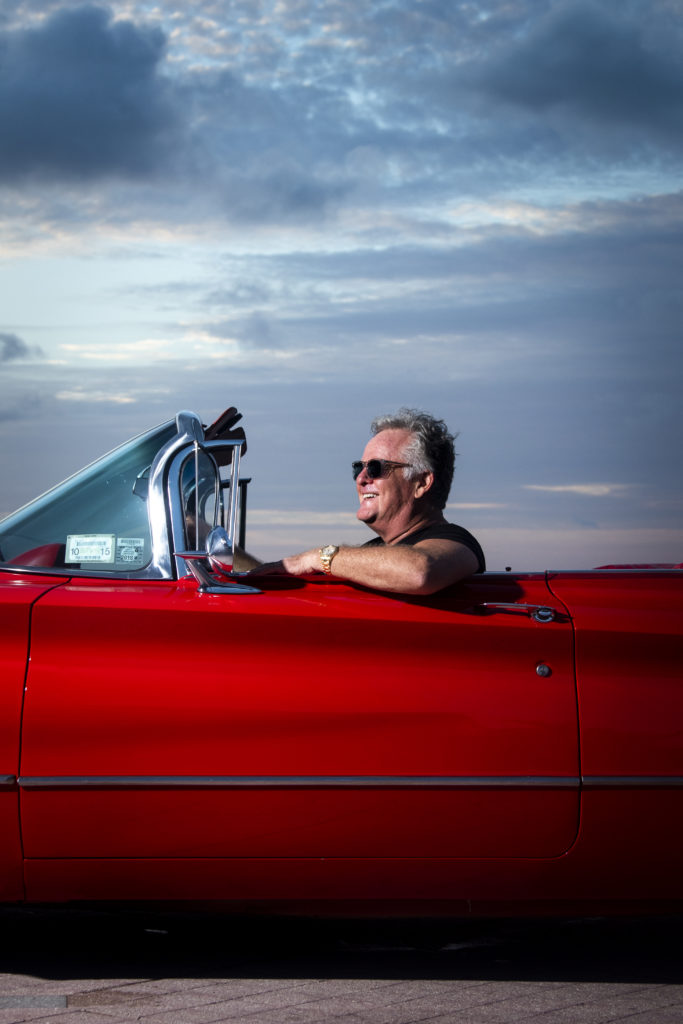 Buddy Sherman, the owner of Southport Raw Bar, hopped on a Greyhound bus in 1979 and moved to Fort Lauderdale from Toronto.

It seems Sherman will never be able to completely detach from Southport Raw Bar, admitting he feels more comfortable there than in his own living room. But while he’s still a staple at the restaurant, he’s also trying to spend more time with his two daughters, 13-year-old Benjy and 8-year-old Bobbi, and his wife of 27 years, Noi.

Another one of Sherman’s pastimes is tinkering with his car collection that includes a 1960 Buick LeSabre convertible and 1976 Cadillac Eldorado convertible. Confessing he doesn’t necessarily like to drive, he says he picked up his enthusiasm for cars from Ferrante, who was like a father to him. “What I love about them is they have beautiful lines,” he says. “The old cars had character.”

As Fort Lauderdale grows, he hopes he can maintain Southport Raw Bar’s foothold while the giants grow around it. “People laugh at me, but I don’t do it for the money,” he says. “I do a good job and the money follows. Carmine never gave me anything. He sold me everything. But what he did give me was the opportunity, which was the best that he could have given me. I didn’t make Southport; I made it a little bit better, that’s all.”

The Beat Goes On