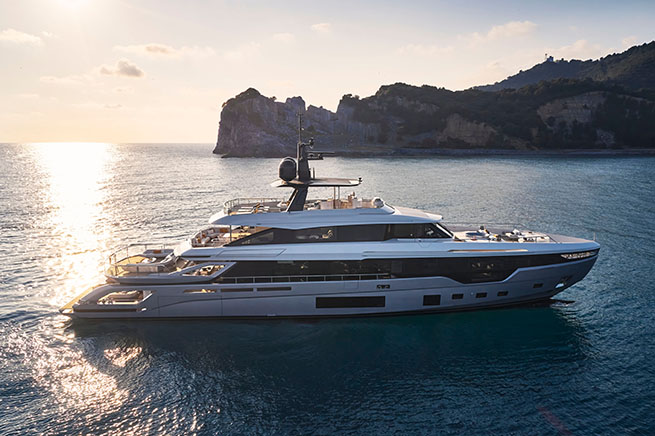 By Rebecca Taranto and Angela Caraway-Carlton

With a burgeoning art scene and a thriving boating culture, Fort Lauderdale is a breeding ground for the collision of great minds on land and sea. Just look to the annual Fort Lauderdale International Boat Show, or FLIBS, where the world’s biggest yacht builders and experts from boating-adjacent industries descend upon South Florida. Meet some of the movers and shakers who are propelling Fort Lauderdale’s boating culture forward. 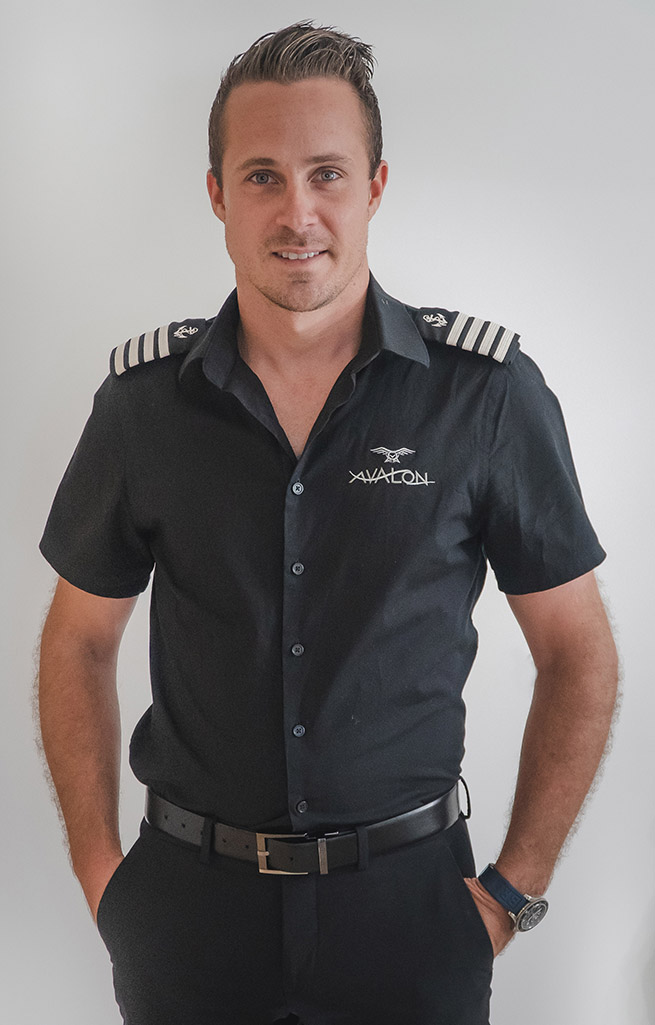 Jesse Clinton, Captain of the Avalon, a 151-foot Delta Marine. On location at Martha’s Vineyard. @Yacht_Avalon

Capt. Jesse Clinton may still be waiting to be officially recognized as the yachting industry’s youngest superyacht captain by Guinness World Records. Still, in the meantime, he’s changing yacht ownership and crew relationships from the ground up. Having grown up sailing off the coast of Savannah, Georgia, Clinton found his way into yachting and eventually to the helm of a 141-foot Broward Marine yacht at age 21. By 25, he was at the helm of the 151-foot Delta Marine Avalon.

So, what does he attribute to his fast track to becoming one of the world’s youngest superyacht captains? “Hard work and loyalty are key,” he says. “I met an owner who was so unhappy with his ‘owner experience’ that he was considering selling, but we worked together to create a positive culture and incentivize the crew to reach their goals, too.”

When the Fort Lauderdale-based captain isn’t sailing, he’s building a mini real estate empire. “It’s my goal to use the industry as a place to meet, learn from and build upon relationships with titans of every industry,” he says. “That wouldn’t have happened if it weren’t for yachting.”

Clinton attributes his repeat clientele to Avalon’s one-of-a-kind build and to his crew, who constantly seek ways to make each charter experience more enjoyable than the last. 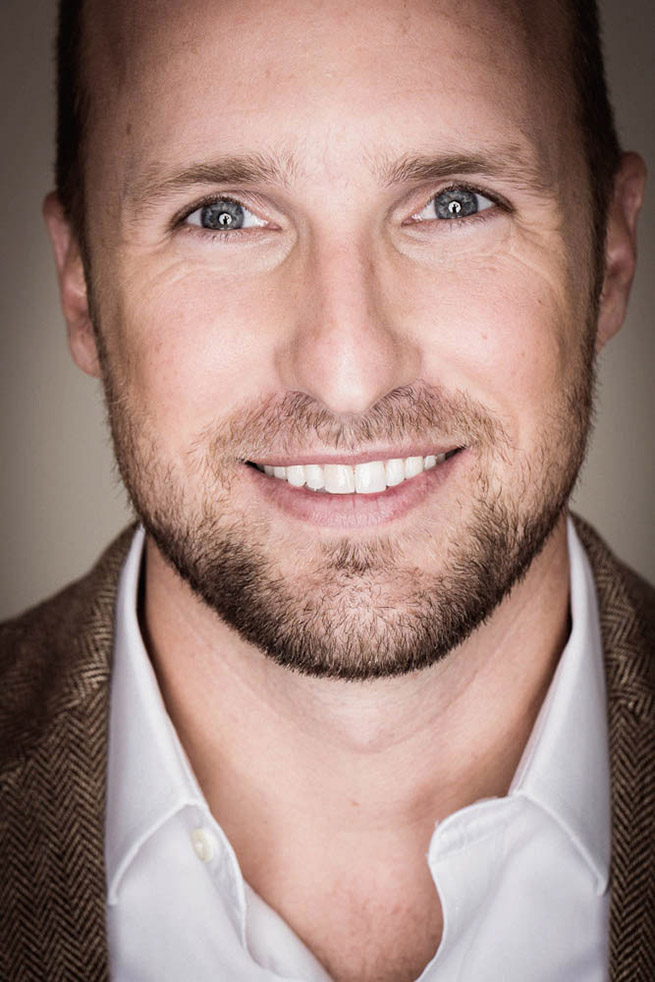 Family-owned German yacht builder Lürssen is the name behind some of the world’s largest yachts—its 2013 build, Azzam, tops the list of the longest private luxury superyachts at 592 feet. The Lürssen name stamps many other notable achievements, including the world’s first motorboat built in 1886, the first hybrid propulsion yacht and the first superyacht propelled by Azipods.

As the director of Lürssen Americas in Fort Lauderdale, Tim Hamilton says representing the world’s most innovative superyacht builds when working with American clients is nothing short of exciting. “I love boats; they are a passion of mine,” he says. “But working with fascinating people is the best part of the job.”

The latest innovation being installed on a Lürssen new build comes in the form of fuel cell technology, where hydrogen produced from methanol is used by the fuel cell to generate electrical power, making it possible to anchor for 15 days or cruise at slow speed for 1,000 miles with zero-emission. The yacht is expected to launch in 2025. 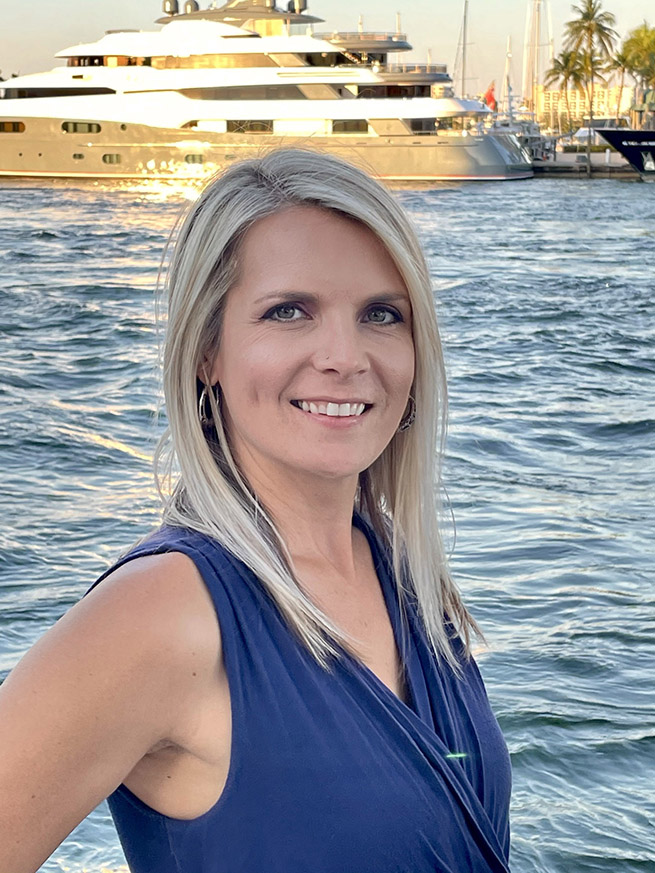 Katy Carter took Venice’s call from her hotel room in Costa Rica, where she was on a charter reconnaissance mission-meets-family vacation. A self-described “escape artist,” Carter is a charter broker with Fraser Yachts, one of the world’s leading yacht brokerage and charter houses.

Carter translates the knowledge gained from her early yachting experience as a crew member into creating exceptional yacht charter vacations for her guests and has booked hundreds of term charters throughout her career. While she books charters on superyachts asking as much as $1 million per week, she says she prefers the 130- to 180-foot range, as these yachts have “serious toy collections, six cabins and the right amount of crew to deliver the high-end experience people really want.” Her five-star customer service and attention to the smallest details—such as partnering with a seaplane operation to fly her clients directly to their charter yacht in the Exumas—brings her repeat clientele.

“You can’t get a more private, safe, isolated and custom experience than on board a yacht,” Carter says.

Dean Silva, Chef and founder of Today’s World Kitchen. On location in the Hamptons @TodaysWorldKitchen

A random position aboard a prawn trawler led Australian-born chef Dean Silva to the yachting industry, where he has served as head chef aboard some of the world’s most prestigious yachts over the last 20 years. Silva launched his passion project, Today’s World Kitchen, 12 years ago—a website and YouTube channel dedicated to promoting a community of talented chefs from around the world. “This is a community created by chefs, for chefs,” he says.

This year, Silva added Instagram Live interviews and cooking demos to the portfolio, with guests ranging from Michelin-starred chefs in Ho Chi Minh City and the Netherlands to a Japanese chef with a food truck.

Based in Fort Lauderdale but always on the move—Venice found him on a land-based gig in the Hamptons—Silva continues to dabble in the yachting world as a freelance chef. Look for him at FLIBS, where he’ll be seeking out more talented chefs to interview for his Meet and Eat Instagram series. 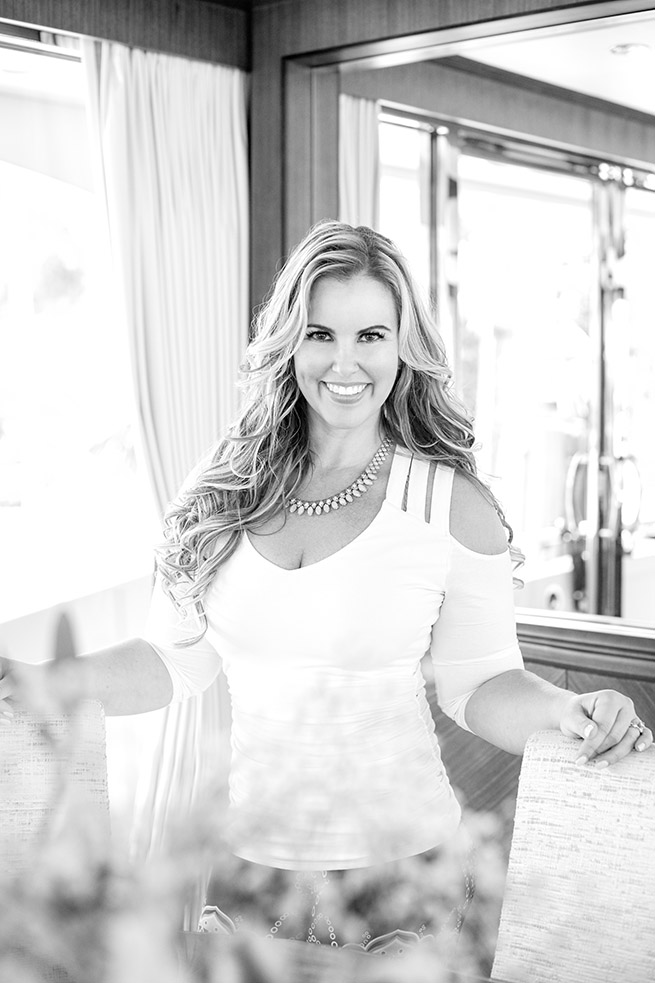 Award-winning yacht interior designer Destry Darr has overseen close to 300 design projects in her 20-plus years in the industry—and she’s busier than ever, with the surge in boat and yacht sales spurred by the pandemic bringing everything from staging and outfitting requests to comprehensive refit projects.

Working with a professional yacht designer on any yacht project is critical, she stresses, as yacht designers understand the inner workings of a yacht’s layout, especially its mechanical, plumbing and electrical systems, each of which are often integrated with or complemented by furniture and decor. “The key to good design is the ability to solve problems creatively,” she says.

An expert in space planning and refits, Darr is highly sought-after for her knowledgeable and calm approach to each project. One of her recent projects—a multimillion-dollar refit of a 2003 Westport 112, Hannah—earned her and the boat global recognition as a finalist in the 2021 World Superyacht Awards. 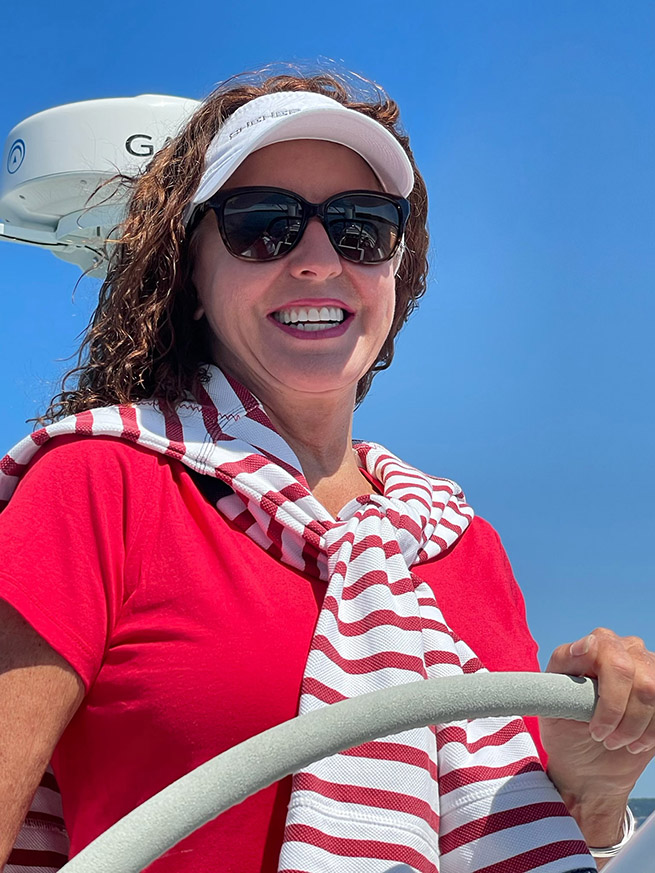 When Michelle Howland thinks about her work, she takes a “show, don’t tell” approach. Her active lifestyle is an aspirational selling point for the luxury real estate agent. A boating enthusiast, she often also whisks clients away to see homes by water. “It’s easy for me to sell Fort Lauderdale,” she says. “I live what I sell.” Aside from showcasing Fort Lauderdale’s pristine beaches and swaying palm trees by boat, she carves out time to drive prospective homebuyers through downtown, pointing out cultural gems like NSU Art Museum Fort Lauderdale.

A self-proclaimed “Army brat” who’s lived worldwide, she immerses herself in the local art and culture scene. Now the Compass Florida agent is rallying behind the museum’s “Find Your Place in the Sun” initiative, which helps real estate agents and developers welcome newcomers with customized museum memberships and exclusive access to the region’s art scene. “We’re known for our beautiful beaches and warm weather,” Howland says, “but I want to show them Fort Lauderdale also has so much to offer when it comes to culture.”

To the average onlooker, the number and size of vessels and visitors at FLIBS is staggering. From the East Las Olas Boulevard bridge to the 17th Street Causeway bridge, the Intracoastal Waterway is packed with gleaming boats and yachts, the most jaw-dropping of which punctuate the end of the in-water portion of the show, which runs from October 27-31 this year.

Now in its 62nd year, the boat show began in 1959 as a gathering of local brokers looking to offload excess inventory and has evolved into an annual event that has defined the city of Fort Lauderdale and solidified its position as the yachting capital of the world. Take a peek at some of the luxury vessels slated to be on deck at FLIBS.

Unveiled in May, the 125-foot Azimut Grande Trideck is a spectacular showcase of layout innovation. Characterized by four terraces, including an aft raised “mezzanine” deck dubbed the Sea View Terrace, the Azimut Grande Trideck is intended to maximize the enjoyment of life at sea. Offering a five- or six-stateroom layout including an on-deck owner’s suite, along with a beach club and tender garage, the new flagship for the Italian yacht builder Azimut Yachts will undoubtedly be a fan favorite.
What the average onlooker may not realize is this sea-inspired showcase is not to be waived off as just an ostentatious display of wealth; the result of creative collaborations between forward-thinkers, it pulls in a significant amount of revenue for the city of Fort Lauderdale and the yachting industry worldwide. Making its FLIBS debut this year is the head-turning Motopanfilo 37M, a 121-foot yacht built by Italian titan Benetti. With an exterior profile that harks back to the classic 1960s “navettes” (Benetti’s retro Italian ferry boats) and a stylish bronze metallic ribbon in its bulwark, the Motopanfilo combines the indoor/outdoor living aesthetic of today with the timeless Italian charm that can’t help but make waves. With a name that alludes to the Italian word for the jet-set lifestyle and movie star glamour, the Motopanfilo 37M offers superyacht living with its five-stateroom layout that includes an on-deck owner’s suite and beach club. 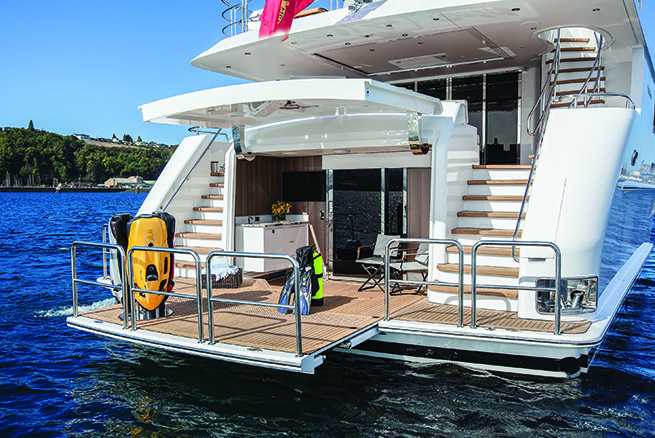 Awarded “Best of Show” by NBC Sports during the 2019 Fort Lauderdale show, the triple-deck Majesty 140 offers a six-stateroom layout, a beach club, fold-down balconies and plentiful indoor/outdoor deck areas. Large windows invite natural light inside while offering stunning panoramic views, whether from the main salon or from the 180-sqare-foot sky lounge. Headquartered in Dubai with sales offices in Fort Lauderdale and Stuart, Florida, Majesty Yachts builds motor yachts from 49 to 175 feet in length. The company has seen great demand for its 140-foot model, selling two to American owners since the first hull debuted in 2019, with the fourth hull on display at the show.

Perched in the middle of a production yacht range that spans from 112 to 172 feet in length, the 125 model from Westport Yachts ticks all of the boxes for modern yacht owners. The model was first introduced by the Washington-based builder in 2017, with seven built to date. Designed to accommodate a variety of interior styles, the 125 raised pilothouse features a five-stateroom layout with an on-deck owner’s suite, a country kitchen-style galley and a spacious beach club. A shallow 6-foot, 1-inch draft and 20-knot cruise speed makes it an ideal platform for cruising from the East Coast to the Caribbean. Editor’s note: Due to the pandemic, plans are subject to change. As of press time, these superyachts were confirmed to be on display at the show.