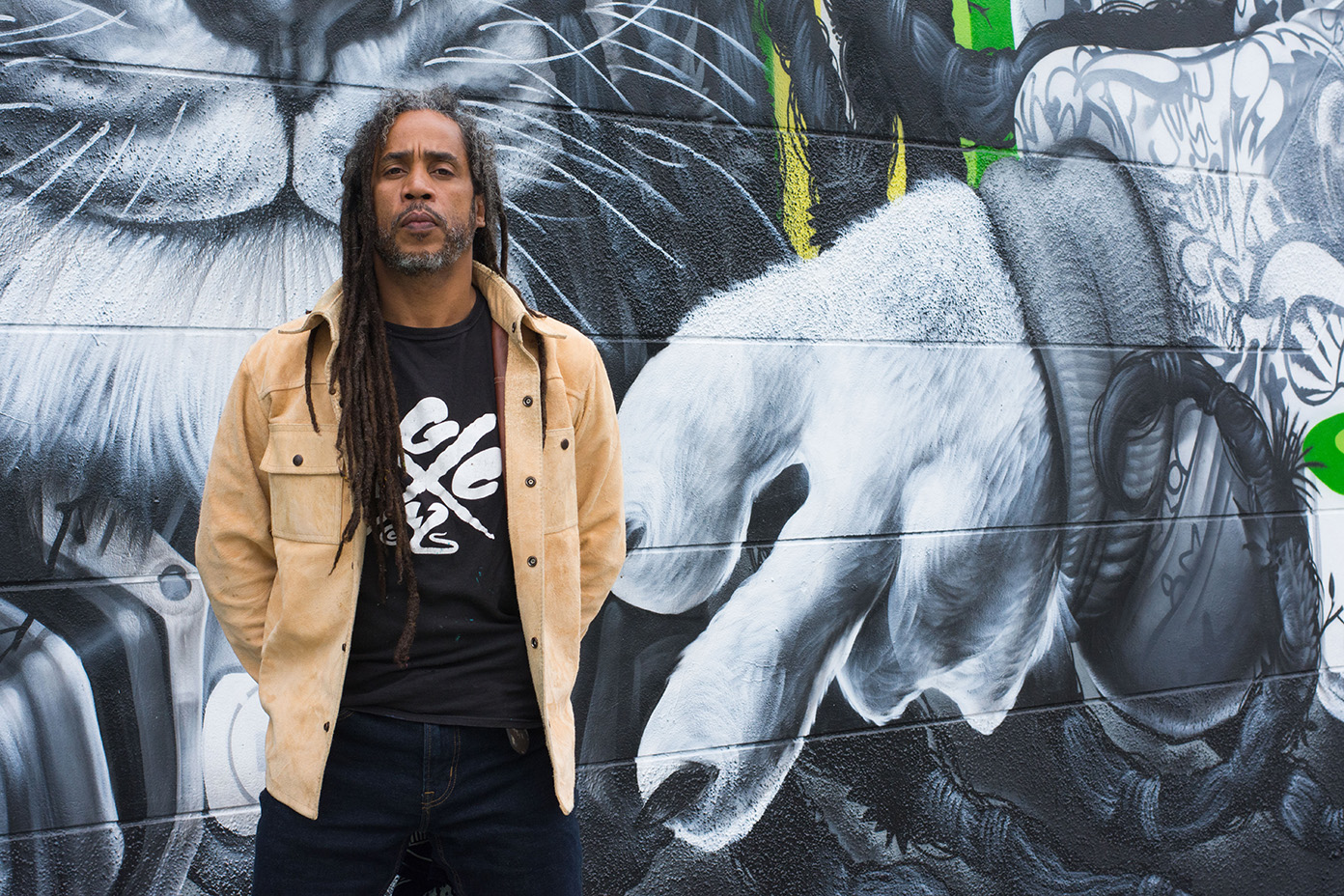 From superheroes to hip-hop icons, nothing beats a legendary origin story—that pivotal moment when the hero dons their cape or drops their first bars, snatching at destiny. South Florida-based muralist and mixed media artist Ruben Ubiera has one tale for the books about how his artistic fate was sealed with a dead rat and some spray paint.

He was just a comic book-loving teenager from the Dominican Republic on a summer trip to the Bronx, New York (where his family would eventually move when he turned 15). It was the 1980s, and the city was percolating with the birth of hip-hop and graffiti culture. The serendipitous day came when he stumbled on a guy throwing tags on a building. “He went over the AC, the doors, the windows, and there was a dead rat on the windowsill,” says Ubiera, 45. “I wanted to call out, ‘Watch the rat!’ But before I could say a word, that guy just went right over it, over everything. And I thought, ‘Here I am in my little class, trying to stay within the lines, while this guy is painting over everything? Even dead rats?’ My head exploded.”

The lesson was clear for Ubiera: Art can be carved out anywhere (dead rats and all). Since then, Ubiera has not stopped coloring outside the boundaries, injecting that street rebel spirit into his work. This energy is writ large in his mixed media pieces and installations, where he uses reclaimed materials like discarded cardboard and old skateboards as his canvas. His technicolor murals also imbue the same vigor, filled with towering gorillas, swashbuckling skeletons and his signature Diablo Cojuelos (limping devils), the Dominican Carnival folk figures that the artist says got kicked out of heaven “for playing merengue and making too much noise with the drums.”

Calling his style “post-graffism,” Ubiera blends graffiti’s aesthetics with other perspectives, from the storytelling expressiveness of comic books to the fine-tuned harmony of neoclassicism. Yet his approach remains deeply committed to the unique dynamism of the spray can. “It’s fast and explosive,” he says. “And when you learn to control the can, it allows you to go with the flick of a wrist from graphic to three-dimensional.” The result is compositions that are always in motion, animated faces and figures leaping off the surface in hues that “stand out and shock you, even if the subject matter is soft and tender,” says Ubiera about his work, which has electrified walls across the country.

Forging his own style, however, proved far from straightforward. After moving to Florida to study at the Art Institute of Fort Lauderdale, Ubiera went the corporate route for over a decade. The urge to commit fully to his practice washed over him in 2004 with the loss of his mother, who had constantly implored him to pursue art. “I realized I’d never painted something with all my ability for her; I’d never crossed that line,” he says. “I had been doing all sorts of things, but when my mum passed away, that’s when I owned it.” Being laid off from his job as a creative director in 2007 only provided him with a final push.

When Ubiera was ready to stake his claim creatively, it didn’t hurt that he found himself in the middle of South Florida’s mural boom. He remembers the early days of Miami’s Wynwood, when locals jostled for walls with global street art stars—never waiting for the paint to dry. “I called that era the Wynwood school of arts,” he says. “It was fierce in the best way possible. You would come and paint a mural, and as you were finishing, there was somebody waiting with a roller right behind you.” 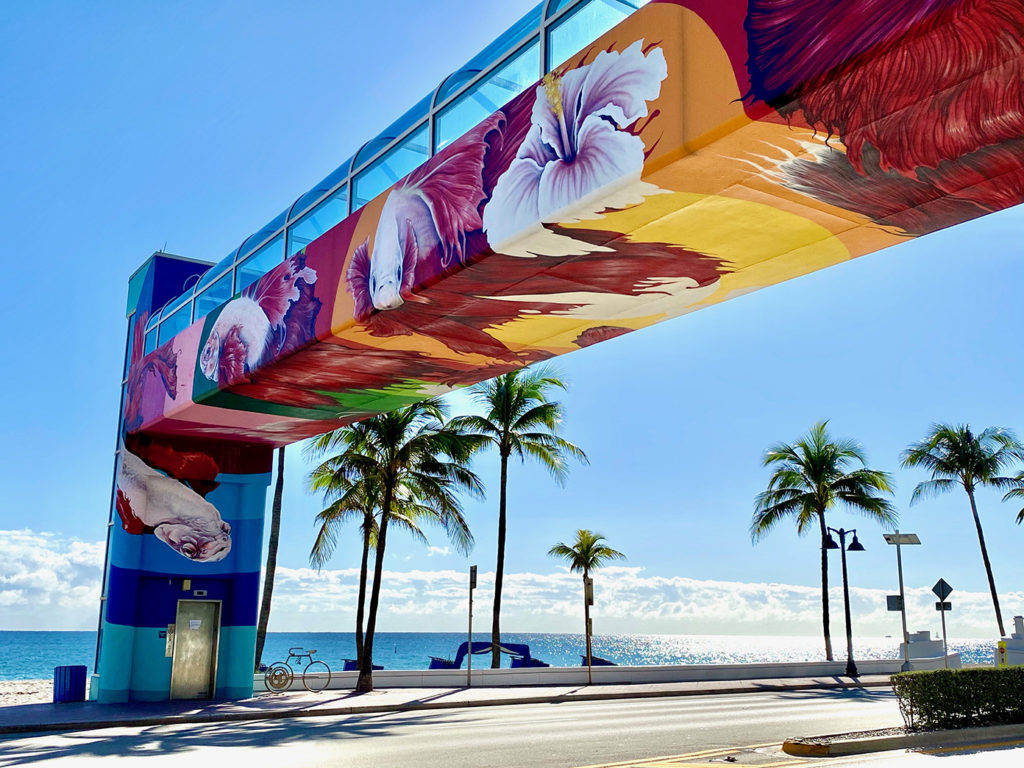 Seeing firsthand how art can shape communities provided him with valuable insight, a perspective he brings to all his public projects. Some of his works take a socially critical slant, like the fractured Statue of Liberty mural, titled Red, White, Black & Blue, completed in Wynwood in June—a clear commentary on the nation’s division. Other commissions aim to deconstruct the heritage and craftsmanship behind local spots, like the tipsy calaveras (Day of the Dead-style skulls) he illuminated with fluorescent paint and ultraviolet light for the new Mexican eatery Agave Bandido in Pembroke Pines.

And some projects are all about celebrating the unadulterated beauty of local street life. “I often feed off the environment,” Ubiera says. Perhaps no other piece speaks to this more than the beachside skywalk mural, Aqua Vida, he wrapped up in March for The Westin Fort Lauderdale Beach Resort. Floating over AIA, the pedestrian bridge stands out like a ribbon of colors against blue skies, with betta fish wading through giant hibiscuses. “You’re in front of the water, with all that color and light,” says Ubiera about his inspiration for the project. “I had to create a piece with that same vibrancy.”

In a short time, the spot has become an irresistible selfie backdrop for locals and tourists alike. Such reactions often attract criticism to street art as a whole, with the idea that the popularity of these prismatic works are based on vanity fodder. Ubiera, however, sees this as the creative democratization that lies at the heart of graffiti—rooted in the human instinct to claim a sense of belonging. “People should feel like they own this,” the artist says. “This piece is not just for the hotel but for Fort Lauderdale and its people.”