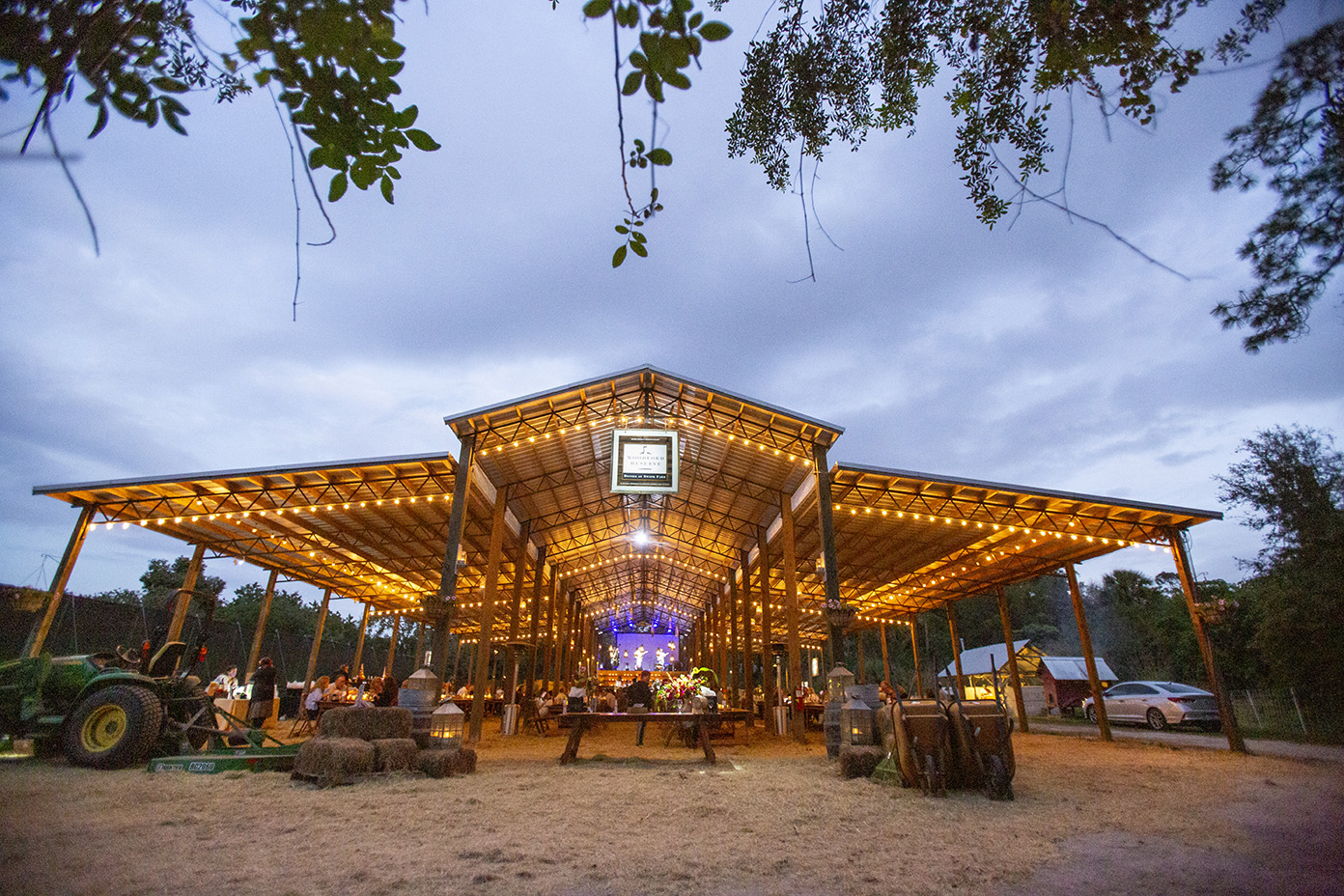 Farming, said Canadian poet and farmer Brian Brett, is a profession of hope. Soil is nurtured. Seeds are planted. Hope for enough sun, enough rain—but not too much—leads the effort to coax food from the earth. It is cyclical, eternal. That is the enduring hope of the farmer, even in the best of times.

For Jodi and Darrin Swank of Swank Specialty Produce in Loxahatchee, 2020 should have been spent celebrating an anniversary: 20 years of cultivating their business, growing hydroponic greens and boutique vegetables for top South Florida chefs. Instead, it became a year all about hope, not just for the harvest but for something universal: an end to the coronavirus pandemic and a chance to rebuild.

“You have to reinvent yourself,” Jodi says, reflecting on 2020. “It was a tough year. There were many times when I was like, ‘Darrin, let’s throw it in.’ But he said, ‘No, let’s keep going.’ I’m more tired than I’ve ever been, but I’m not giving up.”

The Swanks met at the nightclub Club Boca in 1992. Jodi, the daughter of a kosher butcher and textile industry worker, was a successful travel agent, and Darrin, the descendent of six generations of Pennsylvania farmers, was an electrician. They bonded as they shared experiences together, including a number of trips abroad. For Darrin, who dabbled in gardening as a kid, tasting international food was a revelation.

“On our travels, I was exposed to so many different fruits and vegetables that we didn’t have here,” he says. Those flavors, coupled with a favorite memory of visiting the Living with the Land gardening exhibit at Disney’s Epcot when he was a teen, intensified Darrin’s interest in farming, specifically hydroponics. At that time, Living with the Land was called Listen to the Land and was touted as the world’s only large display of food and fiber crops from all the planet’s climate zones housed under one roof. Tons of food from the exhibit was—and still is—used in the theme park’s restaurants. That large output in a relatively small space, paired with the appeal of the science behind hydroponic farming, made an impression on Darrin. He and Jodi married in 1999 and paid $293,000 for a 20-acre parcel of former cattle land that would become their farm. They moved into a 450-square-foot home on the land and poured every penny into the business. 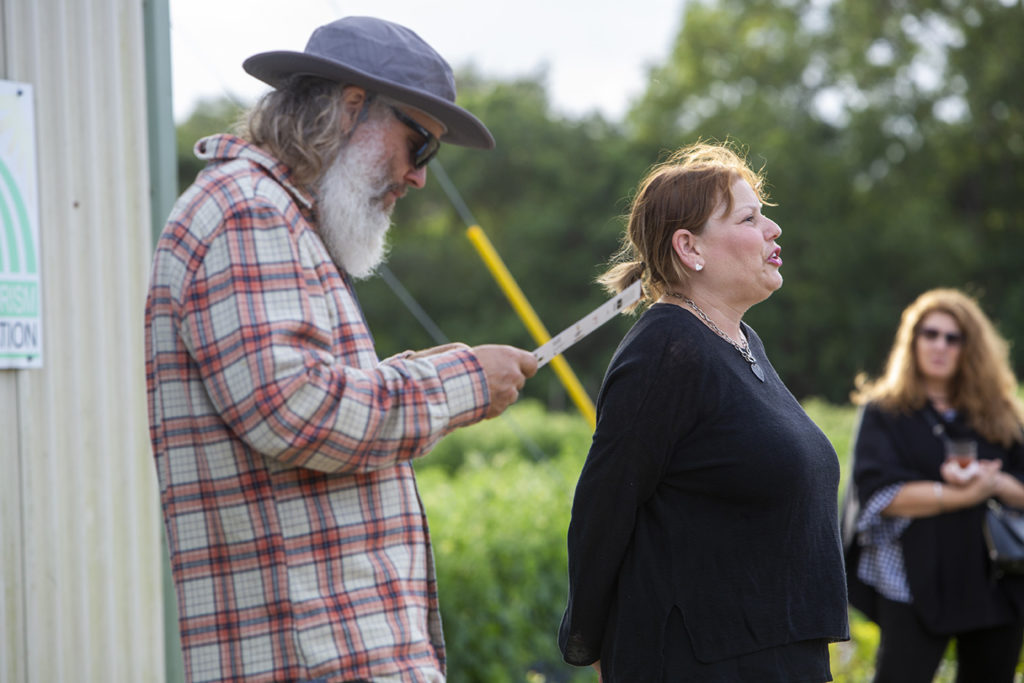 Using a hydroponic farming system, where soil is essentially eliminated and crops are grown directly in a nutrient-rich water solution, the Swanks have introduced South Floridians to a unique way to grow greens and boutique vegetables, and enjoy during their Swank Table feasts.

Darrin taught himself how to create a hydroponic system by voraciously reading. He credits one now-defunct magazine that was the go-to guide for hydroponics, The Growing Edge, with providing detailed information. By 2001, the Swanks were harvesting a small crop grown in a secret-recipe, nutrient-rich water solution that continuously circulated through their shade house’s growing trays.

“In 2002, I started taking produce to all the chefs,” says Jodi, 56. “Here I came with my 2-year-old daughter and my newborn son in a car seat knocking on restaurant doors. We started the farm with basil and baby arugula, and then we began this mix of baby lettuces in a half-bushel lined box, and it was colorful, tender, living on the root. It was something they’d never seen.”

The Swanks sought perfection in the quality of their products, something Darrin realized early on was fundamental for small farmers looking to serve both home cooks and restaurant executive chefs. He implemented practices such as nutrient film technique and reverse osmosis to clean the water and add nutrients while recycling as much water as possible. They used natural methods to reduce pest damage instead of spraying crops with pesticides.

“What surprised me the most over the years is how personal food consumption is,” Darrin says. “I thought I had the cleanest, best-tasting stuff, but people are putting it inside their body, so they have to trust you.” With consistent quality, their reputation grew. Over the years they’ve added dozens of new varieties, now selling more than 350 kinds of greens, vegetables and edible flowers. 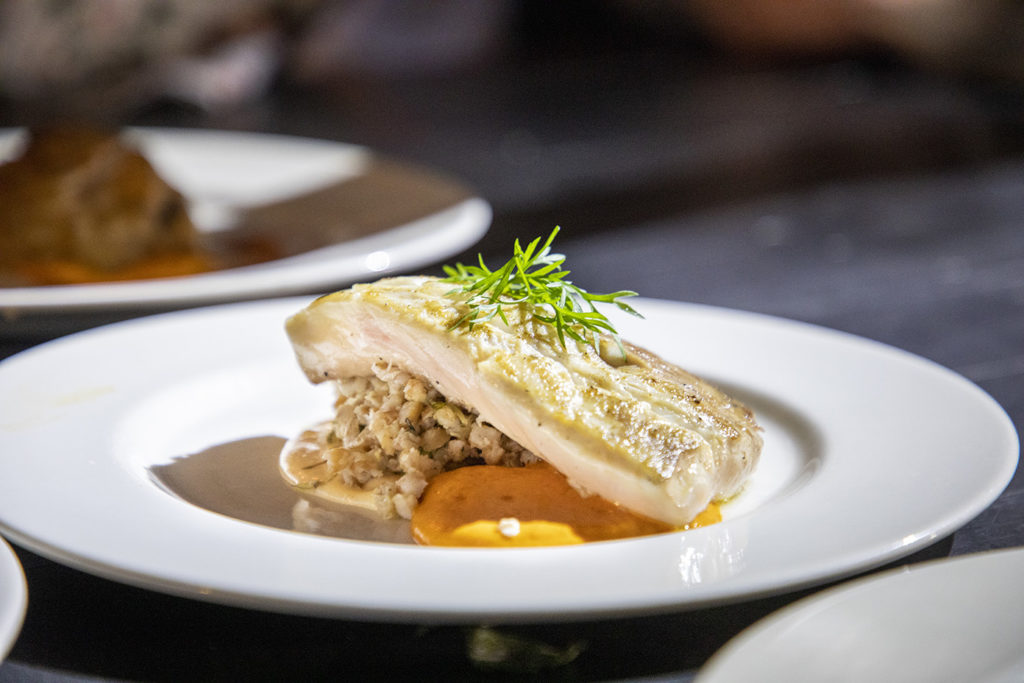 Their success inspired other small farmers in South Florida to grow boutique crops; likewise, they saw opportunities in what others were doing. Farm-to-table Dinner in Paradise events hosted by Paradise Farms in Homestead would inspire their consistently sold-out, $160 per person Swank Table dinners that began in 2011.

It was all going wonderfully, until it wasn’t. The Swanks were halfway through the height of the season in 2020, selling out Swank Table dinners under their 8,500-square-foot pole barn, delivering a bounty of delicate microgreens and unique vegetables to top restaurants like Ariete in Coconut Grove and Cut 432 in Delray Beach, and filling Swank Sacks with produce for locals through the community-supported agriculture program. Days after their March 15 dinner, everything shut down.

To keep afloat, the Swanks focused on hosting Saturday farmers markets under the open-air pole barn to sell produce alongside 28 vendors offering everything from honey to homemade hot sauce. In early January, they brought back the dinner series, albeit a scaled-down version with eight planned events capped at about 130 people (almost 100 fewer than during pre-pandemic times), with socially distanced tables and plated meals instead of the previous long rows of communal dining, plus mask-wearing requirements and hand-washing stations. And when it came time to launch the 2020-2021 growing season, they planted 50% fewer crops and hired back only half their farmhands. Darrin, who had stopped delivering to restaurants to focus on the farm, resumed his travels. At each location, he heard stories of economic and emotional pain, tales echoing the U.S. Department of Agriculture’s October report from its chief economist that stated, “the immediate and drastic decline in food demand by restaurants and hotel customers isolated farmers and food processors from some of their biggest buyers, especially for meat, dairy and specialty crops.”

“Everybody is going through their own challenges,” says Paula DaSilva, executive chef for the Ritz-Carlton, Fort Lauderdale, who leads the culinary team at the hotel’s Burlock Coast restaurant and is a longtime collaborator of the Swank family. “But the human interaction between restaurants and farms helps a lot. It’s an honor to be part of Jodi and Darrin’s lives and watch their farm grow. They’ve helped me be successful as a chef. Chefs need to think outside the box and be creative when purchasing ingredients and consider what they can do to support farmers and their livelihood.” 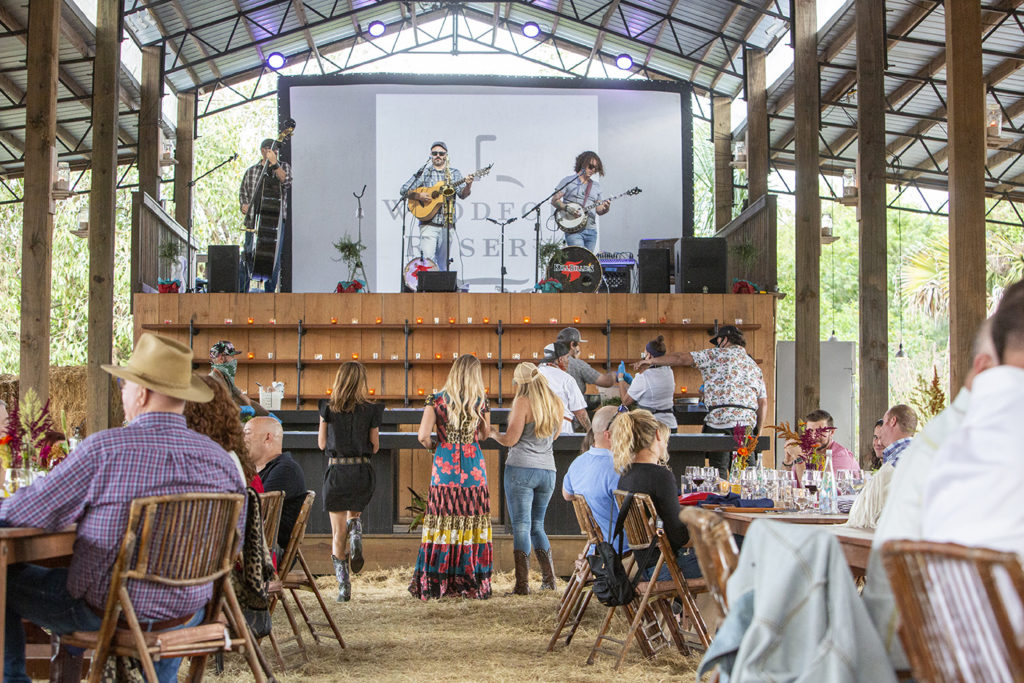 DaSilva was one of the featured chefs at the Swanks’ SHE Feasts dinner, an event with an all-female culinary team held earlier this year. Like all Swank Table events, a portion of the proceeds was donated to a local nonprofit. The charity of choice for the dinner featuring DaSilva was Women of the Western Communities, an organization that provides academic scholarships and support for the YWCA’s Mary Rubloff Harmony House women’s shelter.

“We try to work with very small charities because we know our donation will be used for one child, one animal,” Jodi says. “This community has been good to our family, so it’s our way of giving back.”

Through the pandemic, the Swanks have absorbed lessons in diversity and resiliency that might inform their future. Darrin, 54, recently received a permit to grow hemp, a versatile crop that fuels the exploding market for CBD and CBG products and seems to favor South Florida’s weather extremes. And he sees potential in those extremes, which may only increase with climate change.

“If you can come up with vegetable varieties that can grow in most climates, I think being able to breed subtropical plants is something that needs to be done because no one’s doing it from a business perspective,” he says. “That’s something I’d like to explore.”

For Jodi, the brutal months of the pandemic have left her yearning for some downtime to walk on the beach or just take a Pilates class. With two of her children in college and the third graduating from high school next year, she imagines a future when one or more of them might take over the farm, a time when she and Darrin can be less hands-on with daily operations and perhaps travel again.

Yet despite the hardships they’ve faced, the land clearly lives in Jodi’s heart. She and Darrin recently completed construction on a 4,500-square-foot Victorian farmhouse—Jodi’s “dream home”—with cheerful blue paint and a wraparound porch.

On this winter day, the sun is setting behind the tree line west of their vegetable rows, just a short stroll from the new house. Jodi’s bright orange rain boots tread a well-worn path among the tomatoes, peppers and cabbage. Memories of the pandemic and the challenges it’s presented her, Darrin and all the other farmers out there are still fresh in her mind. But now, it’s time for dinner. She plucks a handful of little peppers from the vine to share with visitors, smiles and says, “Aren’t they sweet, like candy?”

A Moment with Mom