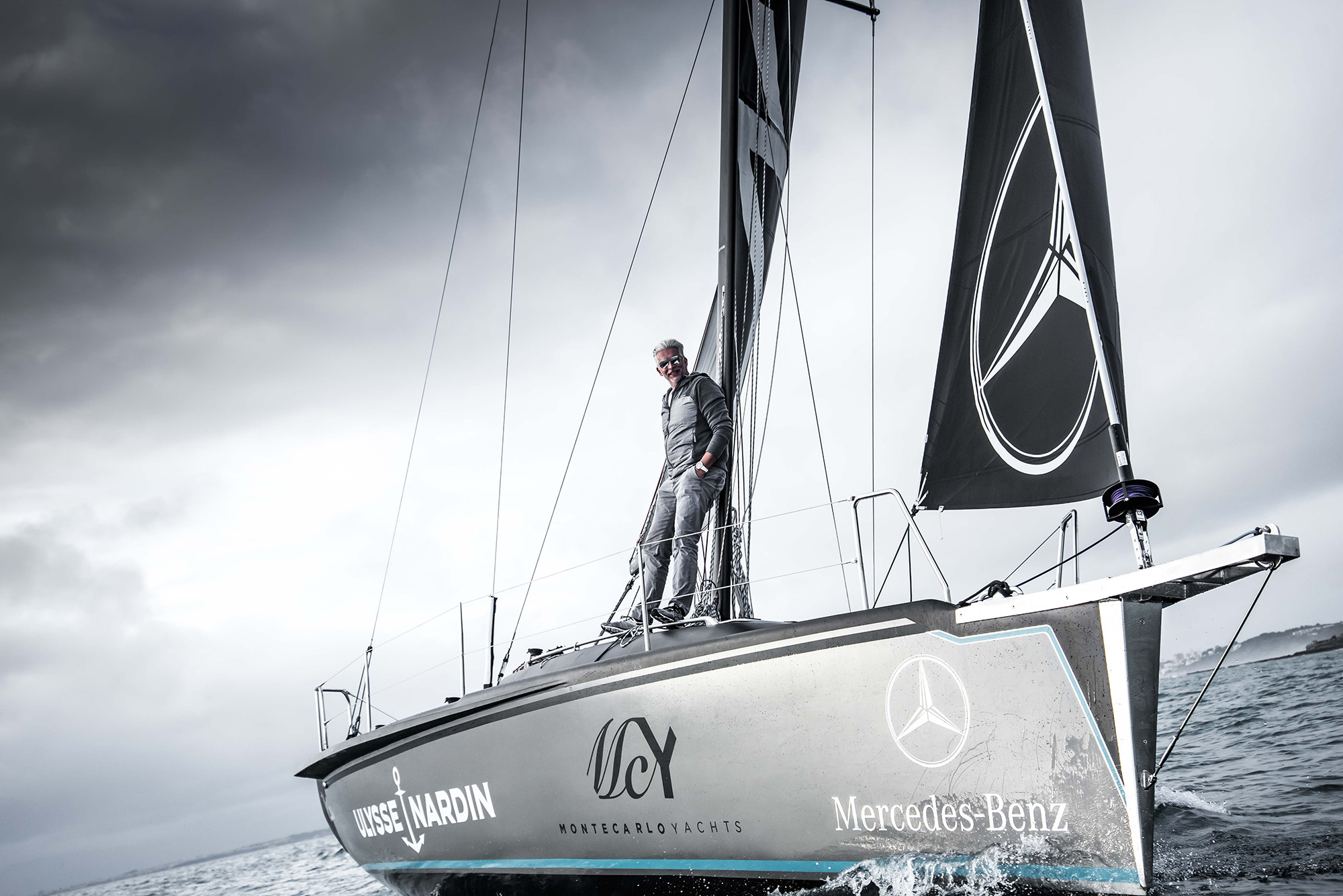 On January 20, Dan Lenard hoisted the sail on his 33-foot carbon fiber sloop, Scia, and glided from Cádiz, Spain, into the North Atlantic Ocean, heading west. It would be his first trans-Atlantic crossing, and he was doing it solo—and without an engine, compass, radio, GPS, autopilot, navigation or electronics equipment. The few items he brought included a watch, a GoPro, clothes and enough carefully packaged provisions to last the duration of the monthlong-plus trip.

This was not a midlife crisis journey inspired by reaching his 50th birthday; instead, it was something Lenard says he had dreamed of doing for many years. A dedicated sailor, Lenard knows a thing or two about boats and the ocean. As the co-founder of the Venice, Italy-based design and naval architecture firm Nuvolari-Lenard, he is one of the world’s most respected motor and sailing yacht designers. The Nuvolari-Lenard duo has designed and built some of the most standout and innovative private yachts in the world, including the 209-foot Perini Navi ketch Spirit of the C’s (formerly Felicita West) and the 350-foot Oceanco megayacht Black Pearl.

The purpose of his 4,800-nautical-mile journey, he says, was twofold: It was meant to serve as a demonstration of “pure sailing” or the beauty of sailing the seas without modern technology. It was also a call to action to combat plastics pollution in the ocean. It’s all part of something he calls the Vela Code, a code of conduct that enforces respect for the environment and unifies the responsibility of all who enjoy the sea and its coastlines.

The word “vela,” which has Latin origins, translates roughly to “sail” or “sailing.” According to Lenard, the sport “needs a little bit of a kick.” Kitted out with the latest in navigation equipment, electronics, guidance, autopilot and other gadgetry, today’s yachts—both power and sail—depend so much on their equipment that owners can simply push a few buttons and then sit back and watch Netflix while they cruise, he says jokingly.

Immersed in an industry that designs and builds the most technological, high-performance and artistic masterpieces on the water, Lenard understands the market for the sailing and motor yachts that he and his business partner, Carlo Nuvolari, design. The demand, he surmises, is largely driven by the needs of the charter (or yacht rental) market and geared toward the mass production of satisfying larger groups of people who desire the on-the-water experience paired with the comfort and amenities of a hotel. With that, Lenard says, an ancient art is lost.

“Pure sailing is beautiful,” he says. “What we wanted to do with the crossing was to show that you basically need nothing for a good sail.” Repurposing the carbon fiber hull of an incomplete racing boat, building a deckhouse and fitting it with a never-before-used mast, rudder and keel, Lenard and his friends at the Prelog reuse center in Croatia cobbled together a simple sloop from the parts of five boats and christened it Scia. “It was very cheap but high performance,” he says. “I didn’t want to just sit there and float but rather have fun with sailing.”

Without so much as a compass or even a sextant, a navigation tool used by early explorers, Lenard set out aboard the untested Scia, navigating purely by the sun and the stars, along with what he calls the “feeling of the sea.” He calculated his parallel by the rise and fall of the sun, and planned his days in advance to take into account the challenge of navigation without autopilot or a crew. 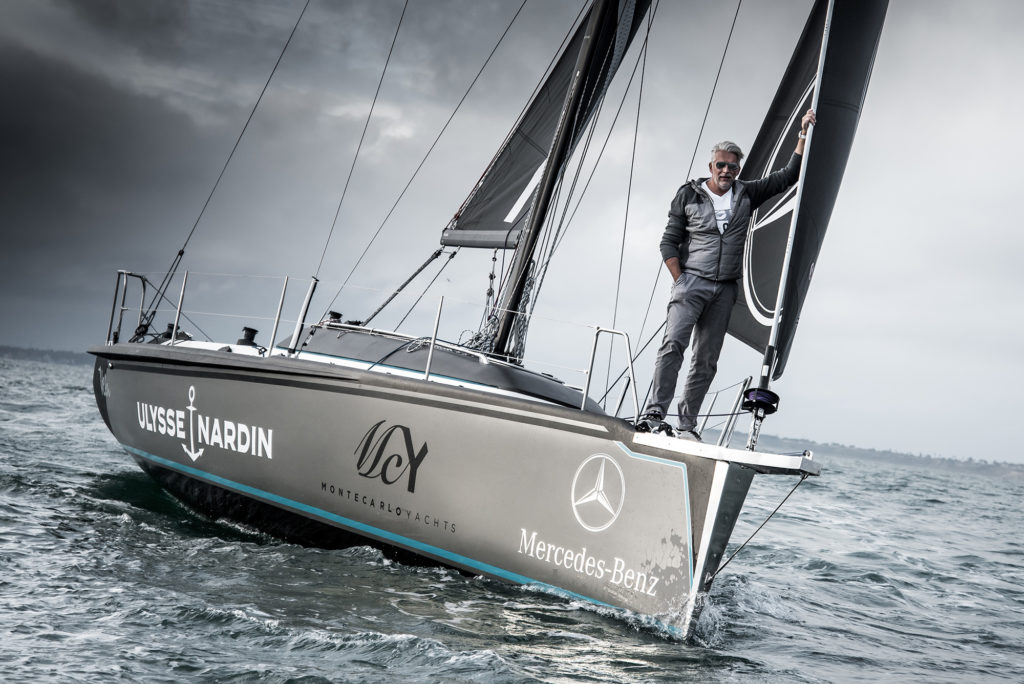 In an effort to highlight the concept of pure sailing, which Lenard calls the Vela Code, he used only the sun, stars and his own sailing acumen to reach Fort Lauderdale’s shores.

Planning ahead was critical and any tasks that necessitated leaving his steering post or taking his hand off the rudder while the wind was blowing and the sails were up required forethought. “Once the sails were up, I needed to have everything for the day at hand.” Lenard says. “In 20 knots of wind, there’s nobody to hold the rudder for you in the event you need to go below deck to get a drink or change your shirt. With autopilot, a solo sailor has about five to 10 minutes to leave the rudder. Without that, you can’t let the rudder go for more than 10 seconds.”

After 43 days at sea, which included Lenard making a pit stop in Antigua for dinner and a few beers before facing treacherous conditions around the Bahamas, he sailed into Fort Lauderdale on March 3. There, in what he calls the “yachting center of the world,” he was greeted at the Pier Sixty-Six Hotel & Marina by an intimate welcoming committee and later congratulated by Fort Lauderdale Mayor Dean Trantalis.

Lenard’s journey brought him face-to-face with harsh realities beyond just weather conditions: our global waste problem. Encountering staggering amounts of plastic and trash on his voyage was a sobering experience for Lenard, who planned ahead so as not to produce a single bag of trash during the trip.

“We are not aware of how much ends up in the water; the beaches are swept clean each day, so we don’t see how much trash would build up if we let it go for a week,” he says. “The sea is the final trash collector. Everything eventually ends up in it.”

Lenard feels that the yachting industry has the means to promote the Vela Code philosophy and can take the first step by eliminating single-use plastic bottles from its boats. “Owners can afford the glass bottles, the watermaker, the filters, everything else to make their own drinkable water on the boats,” he says. “Even glass and aluminum bottles break down better in the ocean than plastic.

“I’m trying to send the message that drinking from plastic is not cool—and yachtsmen are cool people,” Lenard continues. “If people don’t get on board with the idea of protecting the ocean with ethics, perhaps they will get on board through fashion. Yacht owners can be the influencers in this space.”

Lenard plans to display his 33-foot carbon fiber sloop Scia at the 60th annual Fort Lauderdale International Boat Show from October 30 to November 3, after which the boat will be used by offshore racing teams training for the 2024 Summer Olympics.