Steve Hudson grew up biking and surfing and spearfishing and now he wants to make sure Fort Lauderdale remains a place where all that is still possible.

As told to Eric Barton   Photography by Jason Nuttle

If you’ve lived in Fort Lauderdale for a while, chances are you know Steve Hudson, perhaps from one of your circles, perhaps from many. It could be you went to Pine Crest with him, or have seen him out on the water, or rented an office from him on Las Olas, or served on a board beside him. Perhaps you also worked with Hudson’s uncle, H. Wayne Huizenga. The thing is, Hudson wears lots of hats: developer, venture capitalist, restauranteur, husband, dad and board member, serving on a whole lot of projects around town and now the state. He spoke to contributor Eric Barton about his goal to keep Fort Lauderdale moving forward while also the same as he remembers it.

I was born and raised here in Fort Lauderdale. I went to Pine Crest School, all 13 years, so a whole lifetime. After school, I would take my bike to the beach and go surfing. Everything was about the water, so diving, surfing, fishing, spearfishing. It was fun. It was fun growing up down here.

That upbringing, it shaped how I think about Fort Lauderdale. The town I grew up in has grown up, but all those things I had as a kid, the things that I did, they’re still here. My son went surfing when the last hurricane came through. Which is exactly what we used to do. 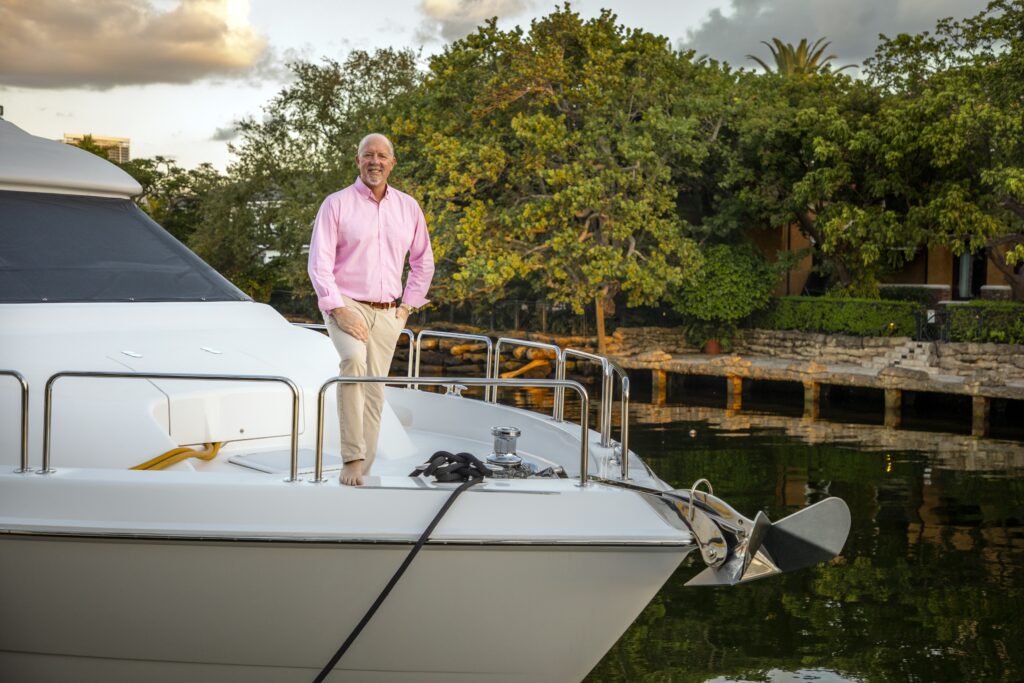 I ended up going to SMU, Southern Methodist University in Dallas. It was not too far away, but far enough. At the time, Dallas was really just a cool city and downtown was really booming. After graduating in ’91, I took a few months off, went down to Australia and New Zealand with a buddy. Then I came back and was told it was time to go to work.

My parents were in the garbage business. It was Waste Management at first, and then my father had his own garbage companies throughout South Florida. He had a Blockbuster Video franchise in Brevard County. I worked in the stores and then did some real estate site selections, because we built that out to six stores before selling them.

After a few months I came back home and got deep in my father’s trash business. We had a company doing construction and demolition. When Hurricane Andrew hit in ’92, we worked 30 hours a day, eight days a week cleaning the devastation down in Homestead. Nonstop for months. I drove all sorts of machinery—skid steers and tractor trailers and all that. After several years, I started working with my father at the corporate level. My company, Hudson Capital Group, was an offshoot in ’97 of my father’s company. I guess you would consider it venture capital before venture capital was even a buzzword. My company now, it has become a very diversified holding company. It’s really a family office more than anything. We have real estate holdings, restaurant holdings, we have a lot going on. We will find the right partners, evaluate the deals and come in as equity partners.

My father, Whit, passed in 2018. It was difficult. He was from Tennessee, and he really enjoyed the outdoors. Hunting and fishing were his passions. He traveled all over the world in pursuit of that. I joined him on some of it. That was a tough time losing him.

When I was 35, I had a hunting accident. I almost lost my left leg below the knee. I was in the hospital for almost three weeks and in physical therapy for years. They didn’t know if I was going to walk. Going from a wheelchair, to a walker, to a cane, to crutches, it helped define what I was capable of. You push yourself to the limit. It was a tough time but it also created opportunity and focus. It led to a motto I live by: “To find your limits, you have to push yourself to the edge.”

Everybody who knows me knows I have another saying I also live by: “It is what it is, but it will become what you make it.” What that says to me is there are some things you just have to accept. But just because it’s that way doesn’t mean that you can’t have some influence or make change in a positive way.

In business, I’ve had some luck but there have also been things I built up over time with the idea that they’d become something down the line. I bought a yacht brokerage business in ’99 and then grew that company over the next eight years.  I got out in ’07 just before the crash. Looking back on it, I realize I was more lucky than smart. It was just really good timing that I sold when I did. I would have done a lot better if I had sold everything right then and bought back in a few years later. You live and you learn. 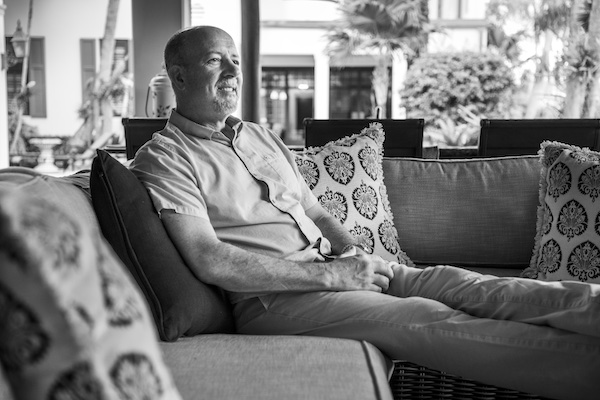 We bought Bimini Boatyard in 2008, and we were in the restaurant business. We did a deal with The Restaurant People to take it over, and repositioned it in 2015 as Boatyard after a big renovation. That was such a huge project. Thirteen thousand square feet. Took four months.

We own about 2,000 acres in Central Florida called Whitfield Ranch that is really pristine old Florida. There’s some turkey hunting on there and, we don’t hunt them, but there’s a bunch of deer. Come November, December, it’s absolutely beautiful and away from everything. Sit by the fire and have a cigar and cocktail with the guys. It’s a ton of fun. We have sporting clays and a gun range and four-wheelers to run around.

Since ’95, we’ve owned property on Las Olas. The last five years, my partner Charlie Ladd and I have gotten really active in revitalizing Las Olas for the better. We’re working with the City and other stakeholders to redo the streetscape. Now it’s really taking off.

We’ve gotten a lot of interest in some big players in the restaurant space and big players in retail who want to be part of what’s coming. We’re working on a project putting a five-star hotel right there across from Louie Bossi’s. If you told someone five years ago, they’d say, “You’re going to put a hotel where?” Now we have such a good, vibrant downtown.

Las Olas is a real passion for me, but there are lots of things I’ve been active in over the years. Community Foundation of Broward, I’m the past chair. Then Downtown Development Authority, I’m vice-chair, and I’ll be chairman next year. Florida Fish and Wildlife Conservation Commission, I was appointed by Governor DeSantis two years ago, and that’s, first off, a whole lot of fun. But it’s also important work throughout the entire state. I’ve learned a ton about imperiled birds, the bear population, the plight of the Florida panther, coral disease, everything. We try to balance the sportsman end of it with the conservation. There are very difficult choices to make. You have some people who say you should never have a bear hunt, and then you have people who have bears in their backyard on a daily basis saying something has to be done. I haven’t made up my mind on that one.

We have to make a lot of big decisions on the Federal Wildlife Commission. Some of the things affect the entire state and even the region. It takes a lot of research to determine what’s right. Whether to allow fishing of the goliath grouper, that’s an issue that’s coming back. Now there’s talk of possibly a very regulated tag system. My personal feeling is something that big is not going to be good to eat. Take pictures, measure it, then release it.

Me and Jeannie, we were introduced at a charity function at Las Olas Riverfront. Friends of ours said we had similar interests, and we got married a couple years later. She moved down here when she was 2, so she’s been around South Florida since she was real small. It’s going to be 18 years we’ve been married. How has it lasted that long? With a lot of “yes, dear.” No, first, you marry your best friend, but then it’s work. A lot of people don’t want to put the work in.

Jeannie is home with the kids. She’s the homemaker. We have a 16-year-old boy and a 15-year-old girl. Do I think about what I’m leaving for my kids? Somewhat. There’s a lot of planning that goes into it, but they need to forge their own path. You know, I’d like to work with them at some point, but I’m not gonna dictate that. One wants to be an artist? Baker? Whatever they want. Just be the best you can be.

Now, where I am, I’m taking a very active role in Las Olas and Flagler Village. I’m trying to shape what Fort Lauderdale looks like in the next decades. It’s a great place, and we don’t quite get our due, if you will. What I’m trying to do is to see that we get recognized as the center of the South Florida region. I’m biased to Broward, because I was born and raised here. I look at the way of life here. What am I trying to do? To create a place my kids want to come back to. If I’m part of that renaissance, I call that success.