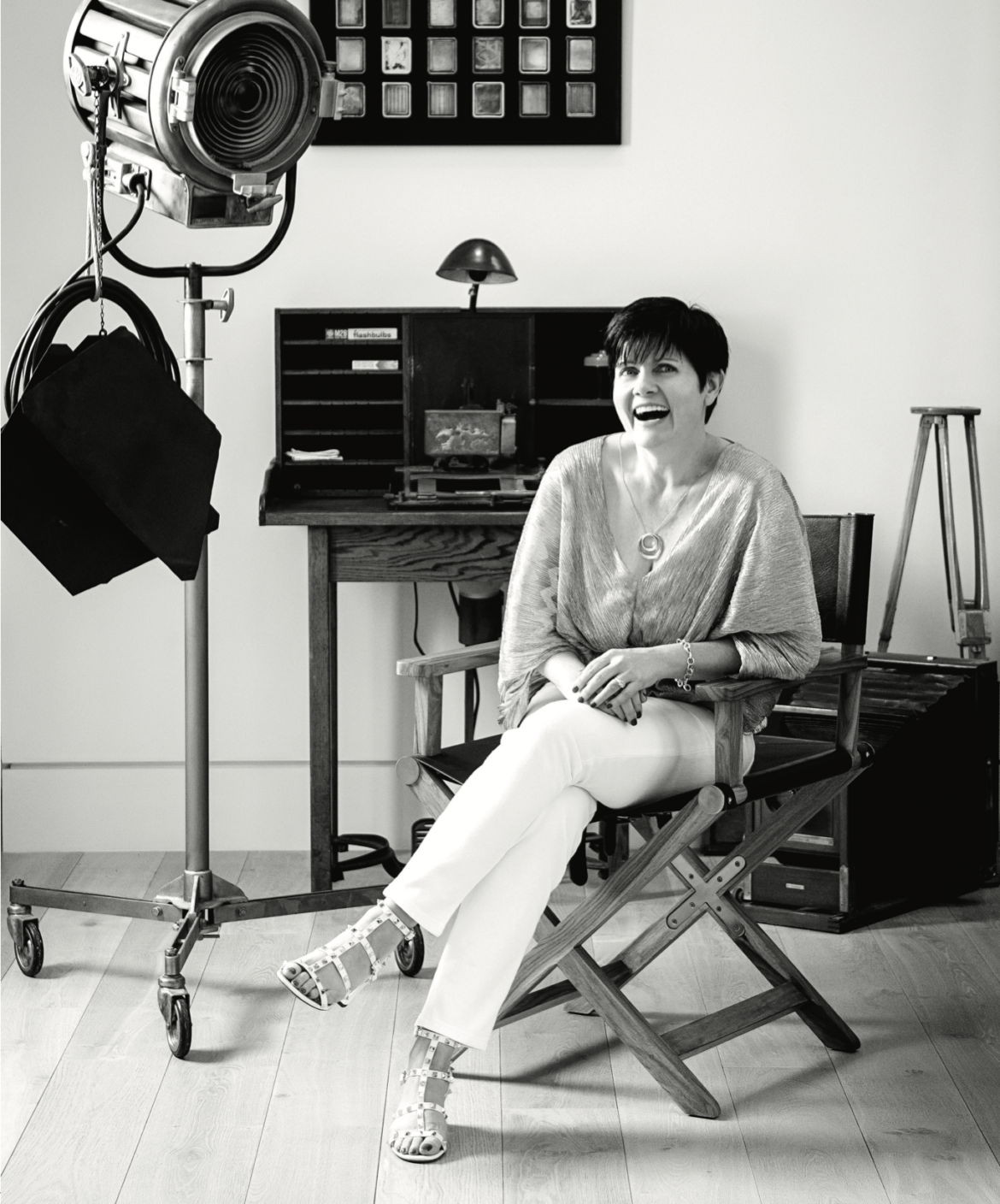 From inside her sprawling, waterfront home overlooking the New River, Shona Tuckman often overhears the water-taxi guides entertaining passengers with stories about her family and their home. Some are about how the land was formerly owned by Wayne Huizenga (fact), or how the house was built to resemble an airplane hangar (myth), but whatever the story, it’s different every time. For Tuckman, she’d prefer that they say, “Go and watch Dr. Bird’s Advice for Sad Poets; the producer lives in that house, and then change it when the next film comes out.” With a laugh, she adds, “I don’t really care what they say, but if they’re going to say anything I would prefer they get it right.”  Tuckman, who shares the architectural stunner with her husband and their two kids, 12 and 15, is a self-professed perfectionist with a go-get-‘em attitude, a trait she shares with many of her films’ characters, some of whom she created at the now-shuttered Starbucks in downtown Fort Lauderdale.  “I used to go there every day,” Tuckman says. “I just knew that if I didn’t try it, I would regret it. I thought, ‘I might fail miserably, but at least I’ll have tried.’ If you don’t try, then there’s nothing to succeed at.” It was there, while her newly adopted baby girl slept soundly in her stroller, that Tuckman wrote her first film, Finding Joy. She wrote about a self-absorbed writer who, after losing everything, moves back home and meets a spirited young woman named Joy, who then informs him that she’s dying.  In 2013 Finding Joy premiered to mostly good reviews, and Tuckman has since written and produced more films—she’s now working on her directorial debut in the film Maggie, which will be set and filmed in South Florida.

As for Tuckman’s life story, a large part of it can be told through her accents—a mix of Scottish, English and American. Born in Scotland, she moved to England at 6 and grew up influenced by her artist mother and architect father. “The kitchen table was pretty much always covered in newspaper, where you could paint and draw on the back of the blueprints that my dad would bring home from his office,” Tuckman remembers. She found her passion for film as a young girl after seeing Star Wars. She then wrote her first novel at 7, coerced her friends to be a part of a play she wrote at 12 and dabbled in photography and theater. In college, she made her way to the Rochester Institute of Technology in New York for a study abroad program. It was there she met her future husband, Brad. Tuckman traveled between the United States and England for three years until Brad proposed on Fort Lauderdale Beach, where the couple was living. When Brad started his own studio business, One Kreate Studio, she founded a branch called Kreate Films in 2011 to reach her screenwriting goals. 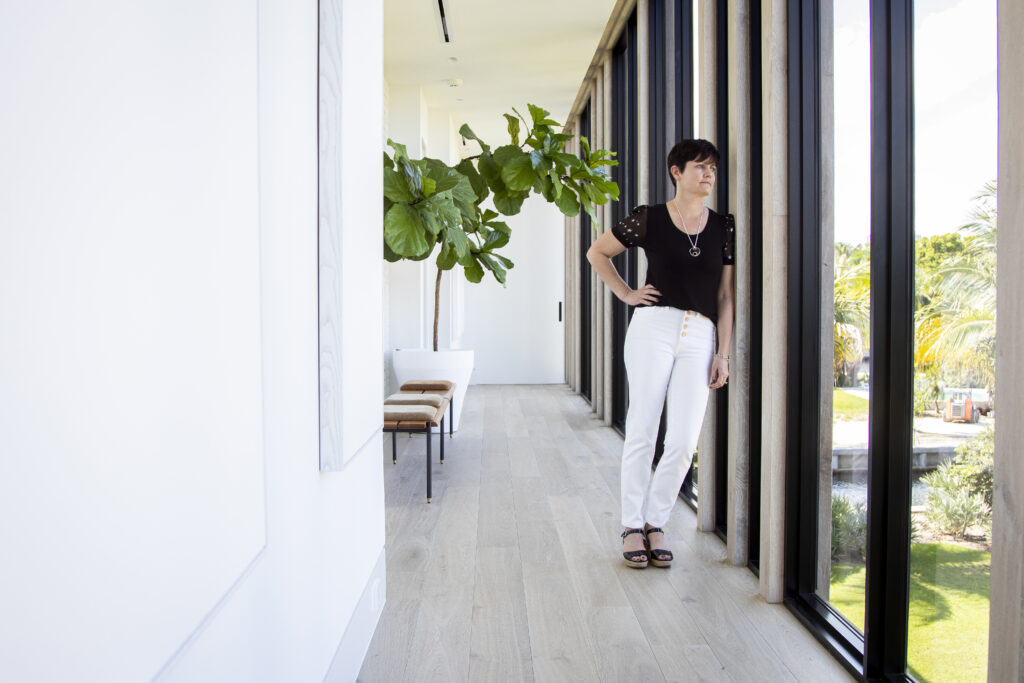 Shona enjoys her
birds-eye view of the New River.

“We have collaborated on everything we have done, as solid support for one another while building our companies. Brad’s not a writer—or even a reader—but I defer to him for his input on contracts, taxes and the serious—aka boring—stuff. I couldn’t do this without him and he feels the same way about my input into his business, Creative Drive, which he sold last year to Accenture.” But don’t expect the couple to co-produce a film any time soon. “As far as working on a movie as a team … I don’t think that’s going to happen. We are both so focused on what we are doing, and I think our marriage is better off in ‘support mode.’”

The early years required traveling to New York City and Los Angeles for meetings and garnering contacts, leading to Finding Joy and her next film, Fat, which tells the story of a man dealing with food addiction. Next came War Story, starring Sir Ben Kingsley, which was shot in Sicily and premiered at the Sundance Film Festival. In 2020, Tuckman adapted the young adult novel Dr. Bird’s Advice for Sad Poets, and she’s now working on her directorial debut, Maggie, and the ultra-personal Adoption Story.  “It’s a universal story about parenthood, but it’s also about hope in a crazy world that we’re living in right now,” Tuckman says of Adoption Story. “The journey that the couple takes, a lot of the things that happened in the script happened to us, and it’s hilarious looking back, but it’s also heartbreaking.”

The inspiration behind the film was the Tuckmans own experience adopting their daughter from China. What was supposed to be a six-month process took three years, but finally they were able to fly to China to meet their 13-month-old daughter, Maya. She had never had solid foods and had been sequestered to a crib her whole life; later, they discovered she shared a crib with another baby girl and they were able to track her down in Australia. The girls Facetime weekly.

For Tuckman, taking her new baby out and about was a way to deal with the anxieties of new parenthood and gave her time to write. “I needed to continue to be creative and keep that piece of myself, so I started to write Finding Joy during her naps or whenever I could,” she says. A few years later, they would go to South Korea to pick up their adopted son, Noah. Today, the family lives in their dream home on the New River, just off Las Olas Boulevard. Shona and Brad purchased the waterfront property that was previously owned by business magnate Wayne Huizenga. The couple worked alongside architect Max Strang and the design team at DKOR Interiors to bring to life their artsy abode; they have lived in the home for three years now. “We wanted to make it a home and not just a museum to live in,” Tuckman explains. “We wanted it to feel cozy and warm and comfortable, but also designed in an artistic way.” Being in the film industry, the home also includes something she never thought she could have: a home theater. Here, she screens movies to vote for the Oscars as well as views her own movies in post-production.

Although on paper it appears her rise in the industry took less than a decade, Tuckman reminds those around her that there are those failed and unfinished scripts that came before her first film and to be patient.  “Nothing will go the way you expect. Be ready for anything, especially South Florida weather.” While an Academy Award with her name on it would certainly be a welcome addition, Tuckman admits her greatest satisfaction comes from knowing that what she’s doing resonates with her audience. “In Dr. Bird’s Advice for Sad Poets, the main character is a teenager dealing with anxiety, depression and general mental health issues. I have been touched by many people around the world saying that it really spoke to them, that they realized they weren’t alone and that it was okay to acknowledge their mental health and ask for help. That makes it all worth it.”