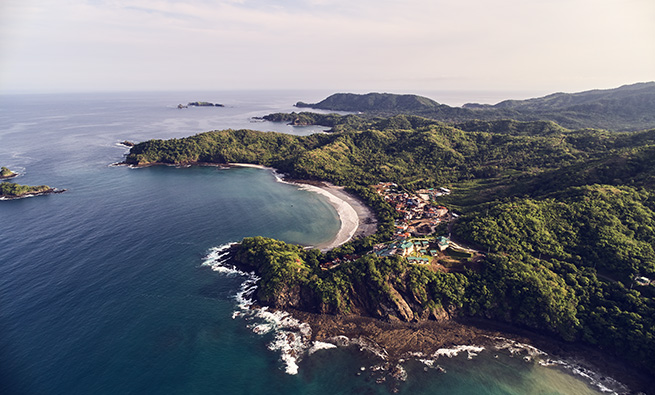 When Atlanta-based entrepreneur Charles Brewer started envisioning his car-free resort town, he first looked to the Caribbean. He wanted to build somewhere in the tropics, and his search soon led him to Costa Rica. He had spent some time in Guanacaste, on the northern Pacific coast, and when someone he met during one of his trips called to say that “the best property in Costa Rica” had just been sold, Brewer immediately asked, “Who bought it?” The answer was a person he had recently met in Colorado. The property, Las Catalinas, was still under contract, but the buyers weren’t able to complete the purchase. “It was by far the most perfect place for my vision I had found, and eventually I was able to put together a group and take over the contract and buy the land,” Brewer says.

Las Catalinas is encased by 1,000 acres of tropical dry forest that are crisscrossed by 26 miles of single-track trails showing off sweeping views of the coastline and valleys, which has helped the town garner a reputation as one of the premier mountain biking destinations in the American tropics. Two breathtaking beaches flank the opposite side of the town, and reefs and islands like the Islotes Pitahayas take just minutes to reach by boat. From Miami, the direct flight to Liberia International Airport is less than three hours, then it’s an hour and 20 minutes by car on the paved road or an hourlong journey along the shortcut trail with a four-wheel drive vehicle. Once you arrive in Las Catalinas, however, the main mode of transport is by foot, since the town is practically car-free. Of course, if you’d like to explore the surrounding area, there’s a car-sharing service that uses a hydrogen-powered vehicle, keeping with the ethos of sustainable living. 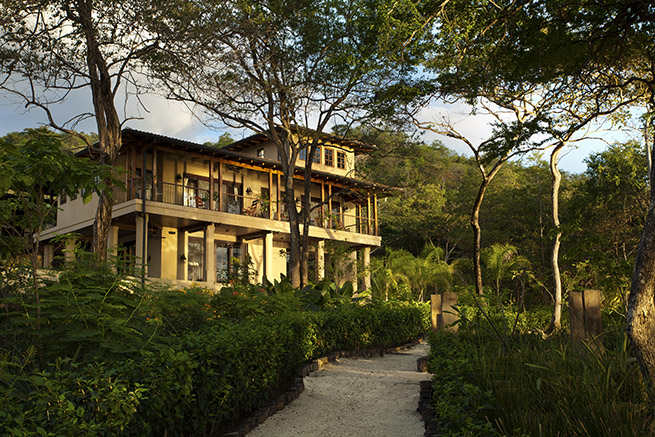 Once you arrive in Las Catalinas, however, the main mode of transport is by foot, since the town is practically car-free.

The environmentally conscious design nods to the new urbanism movement, which first bloomed in the late 1970s and revolves around the concept of walkable neighborhoods that weave together public and private spaces. Developers and architects like Douglas Duany, an early leader of new urbanism, looked to the pedestrian Old World hilltop towns of Ronda in Spain, Cinque Terre in Italy, and Èze and Gordes in France when dreaming up the resort town’s blueprint, which ensures occupants in the sea-facing buildings that hug the coast can capitalize on the view. But unlike these perched villages in Europe, Las Catalinas isn’t built to serve as a defense.

Brewer didn’t have a particular connection to Guanacaste when he and a group of investors purchased the land in 2006, but he felt Las Catalinas could act as a positive influence for the country and showcase a development pattern based on compact walkable neighborhoods. “This is far more environmentally and socially positive than the previously prevailing pattern of car-dependent sprawl,” he says, adding that this is the type of place he personally wanted to spend time in. “I was interested in working on a town with a resort component because resort towns can potentially be much more influential than their size would imply, and also because I felt like there would be more degrees of freedom to do things like being car-free.” 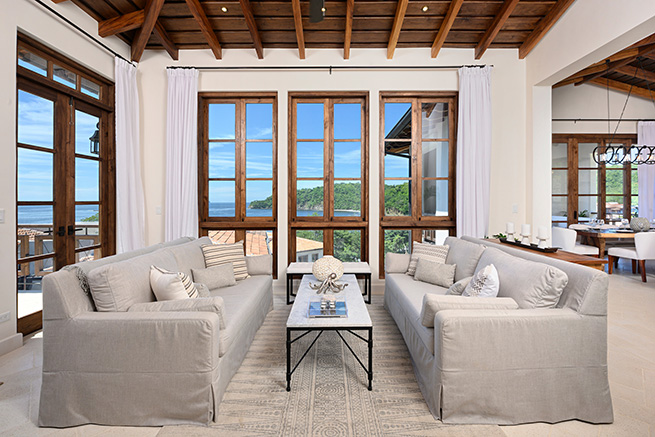 By 2011, the first seven homes—none of which are higher than four stories—a restaurant and an outfitter shop were built, and the town has since expanded from the 21-acre first phase, Beach Town, to include an additional 60 acres on the east side of the main road entering town, which will be called El Prado. While Las Catalinas won’t be anchored by a defining hotel or club, it will be similar in style to resort towns like Aspen or islands like St. Barts in the sense that it will offer amenities like restaurants, shops, gourmet grocers and hotels all within an easy-to-reach, walkable range. Two hotels—downtown’s Santarena and the hilltop Casa Chameleon, a 21-villa, adults-only resort that features personal saltwater plunge pools—currently offer 66 rooms, and there will soon be more than a dozen other retailers and about 10 dining options when the Beach Town neighborhood is completed. 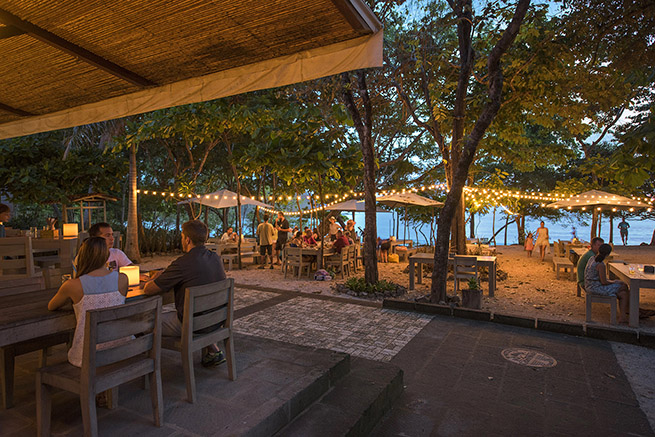 At Casa Chameleon’s Sentido Norte, where the cocktail bar is one of the best places in the resort to catch the sunset, chef José Lopez weaves together a menu inspired by the country’s melting pot of European, African and Mesoamerican-influenced cuisine.

Longtime Miami trainer Chakiris Menafacio leads the new outdoor gym on the beach, Core by ChakFitness, where weights and machines are constructed mostly out of wood, and the Wake Day Spa offers traditional spa treatments and a boutique featuring a curated selection of items from Costa Rican designers. As for the dining, chef Bryan Torres crafts Costa Rican cuisine from ingredients found in the surrounding sea, mountains and farms at Santarena Hotel’s signature restaurant, Ponciana. At Casa Chameleon’s Sentido Norte, where the cocktail bar is one of the best places in the resort to catch the sunset, chef José Lopez weaves together a menu inspired by the country’s melting pot of European, African and Mesoamerican-influenced cuisine.

Beach Town is home to about 180 residences, and while the pandemic initially paused the hospitality component of Las Catalinas, vacation home owners who were unable to visit started offering long-term rentals. The resident population rose from 50 to 200, and visitors are starting to spend longer periods of time in the resort town—part of Brewer’s plan to appeal to more full-time residents. For travelers looking for a private home stay, options include the four-bedroom Casa Plumeria, a modern version of a beach house perched on a hill that looks straight out at the sunset. The master suite’s patio is generously outfitted with an outdoor shower and soaking tub, while the rooftop pool overlooks the sea below. When you’re ready to hit the water, there’s direct access to the Beach Club’s multiple pools, restaurant and cocktail bar, which, despite being the centerpiece of a resort town, feels much more like you’re in your own private villa. 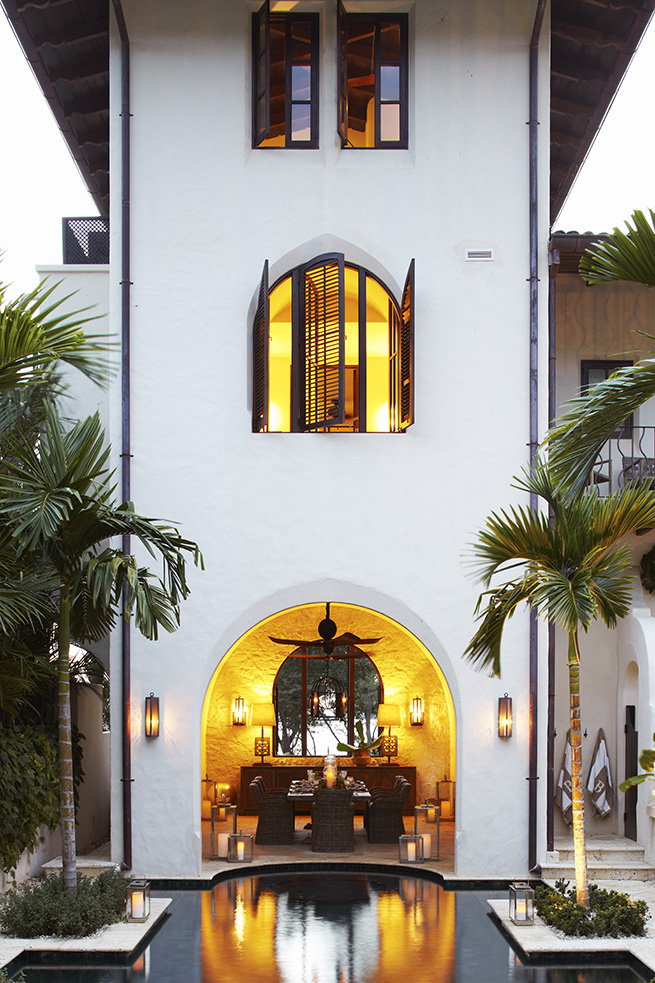 This scenic coastal town will continue to take shape over the years, and its compact master plan includes an abundance of plazas, parks, residences, restaurants, shops, boutique hotels, offices and more.

The season in this part of Costa Rica coincides with South Florida (December through March), but the best part of staying somewhere like Las Catalinas is that if you don’t feel like leaving, there are plenty of options for year-round living in this tropical, expertly designed piece of paradise.

Book now through Beach Town Travel at beachtowntravel.com/contact and get your 7th night free when you mention Venice. For more information or inspiration visit lascatalinascr.com.

Shake It Up: Aperol Spritz