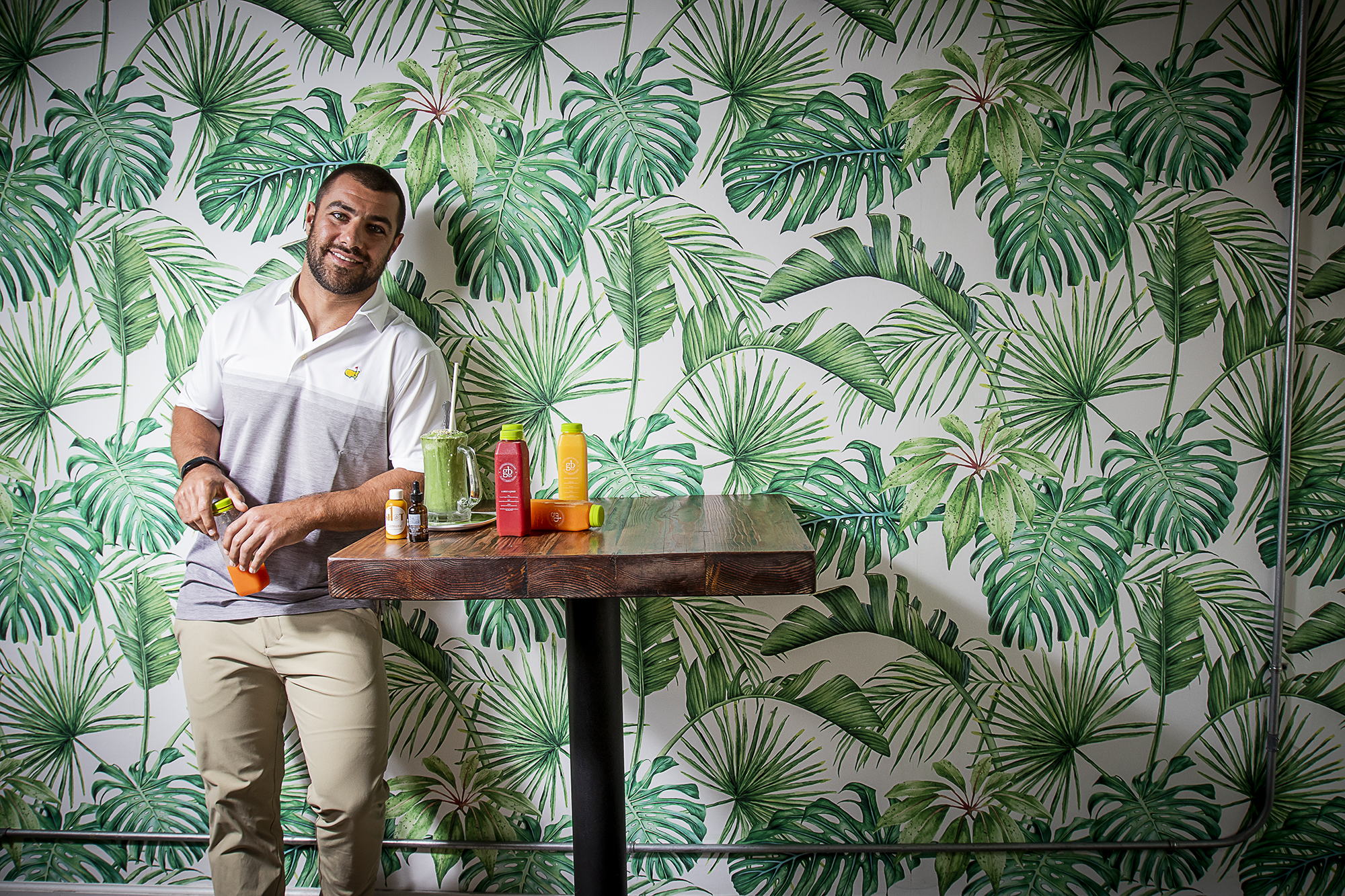 Hemp is happening. It’s talked about constantly, it’s making headline news, and CBD-infused drinks and treats are gaining ground. Long gone are the days when it was taboo to talk about CBD, when hemp was considered an illegal substance. Instead, our society now craves it—and not for the reason one might think.

“People are becoming open to the health benefits,” says Jarred John, co-owner of Green Bar & Kitchen. “This awareness is letting people understand it and adopt it.”

Although hemp and marijuana could be confused as one and the same because they are both part of the cannabis genus of plants, hemp is actually marijuana’s nonpsychoactive counterpart. With less than 0.3% of the compound THC, hemp doesn’t produce the euphoric feeling associated with weed. It does, however, have another compound: CBD, which is thought to provide benefits such as decreased inflammation and anxiety.

These potential health benefits are what the team behind Green Bar & Kitchen wants people to know about. After acquiring the plant-based eatery in October, John and his partners at Damn Good Hospitality wanted to take the brand to a new level while maintaining its foundation in healthy eats. Enter hemp-infused beverages. Customers now have the option to add spectrum hemp oil (which contains CBD) to any tea, coffee, smoothie or juice, starting at $3 for half a dropper of the herbal elixir.

The restaurant has partnered with local company Physicians Preferred to offer its customers a non-GMO, vegan, pesticide-free CBD-infused tincture made from organic hemp grown in Colorado. Coffee is the most popular drink being infused, and perhaps hemp oil can increase awareness with an extra boost of energy while decreasing coffee’s jittery side effects.

However, coffee’s reign may soon be challenged. With the help of members of the Green Bar & Kitchen team, who has more than a decade of experience in the health and juicing industries, the 17th Street Causeway restaurant recently overhauled the juice and smoothie menu and added a juice cleanse program. With playful names like “Spice Up Your Life,” “One in a Melon” and “Sweet Greens Are Made of This,” Green Bar & Kitchen’s juices, which are pressed in-house daily from locally sourced produce like carrots, apples and celery, are packed with nearly 4 pounds of fruits and vegetables in each bottle. Plus, adding a dropper of hemp oil to the juices won’t change their natural taste.

If knowledge is power, Green Bar & Kitchen wants to educate its customers on the power plants have to heal. It’s doing this by hosting a Hemp Happy Hour Monday through Saturday from 2 p.m. to 5 p.m., doling out complimentary hemp oil infusions for any purchased drink. This gives everyone a chance to come into the shop and explore how hemp can help. Well-versed in hemp oil and its CBD benefits, Green Bar & Kitchen’s management has trained staff accordingly so they can educate clients.

According to John, the restaurant has seen a trend of repeat customers returning for the infusions, and an estimation of nearly 50 full droppers and about 40 half droppers of the oil are sold on average each month.

“We want to get education about hemp oil out there,” John says.  “Now that there are plenty of testaments to the health benefits, people are curious. And we have options for everyone’s taste.”

He attributes society’s newfound love for hemp and CBD to the new laws for medical marijuana, which have caused vocabulary surrounding CBD and hemp to inundate headlines and conversations, thus making them more common and acceptable. But it also could be thanks to the 2018 Farm Bill, which removed hemp from the list of controlled substances and legalized the production of it as an agricultural commodity.

Regardless of the reason, hemp oil and CBD infusions seem to have staying power. According to a 2018 Bloomberg report, analysts at investment banking and financial services firm Canaccord Genuity say demand for beverages featuring CBD could reach $260 million by 2022 compared to the negligible revenue they amass now. Another report, released by Forbes in 2016, says The Hemp Business Journal estimates the CBD market will grow to a $2.1 billion market in consumer sales by 2020.

The future seems bright for hemp oil and Green Bar & Kitchen. Next, John will renovate the outside patio during the summer to host live local musicians and a new bar featuring wine-based spirits and fresh mocktails, like the Coco-Cu Cooler with coconut water, cucumbers and mint, and even a splash of hemp oil—if you choose.