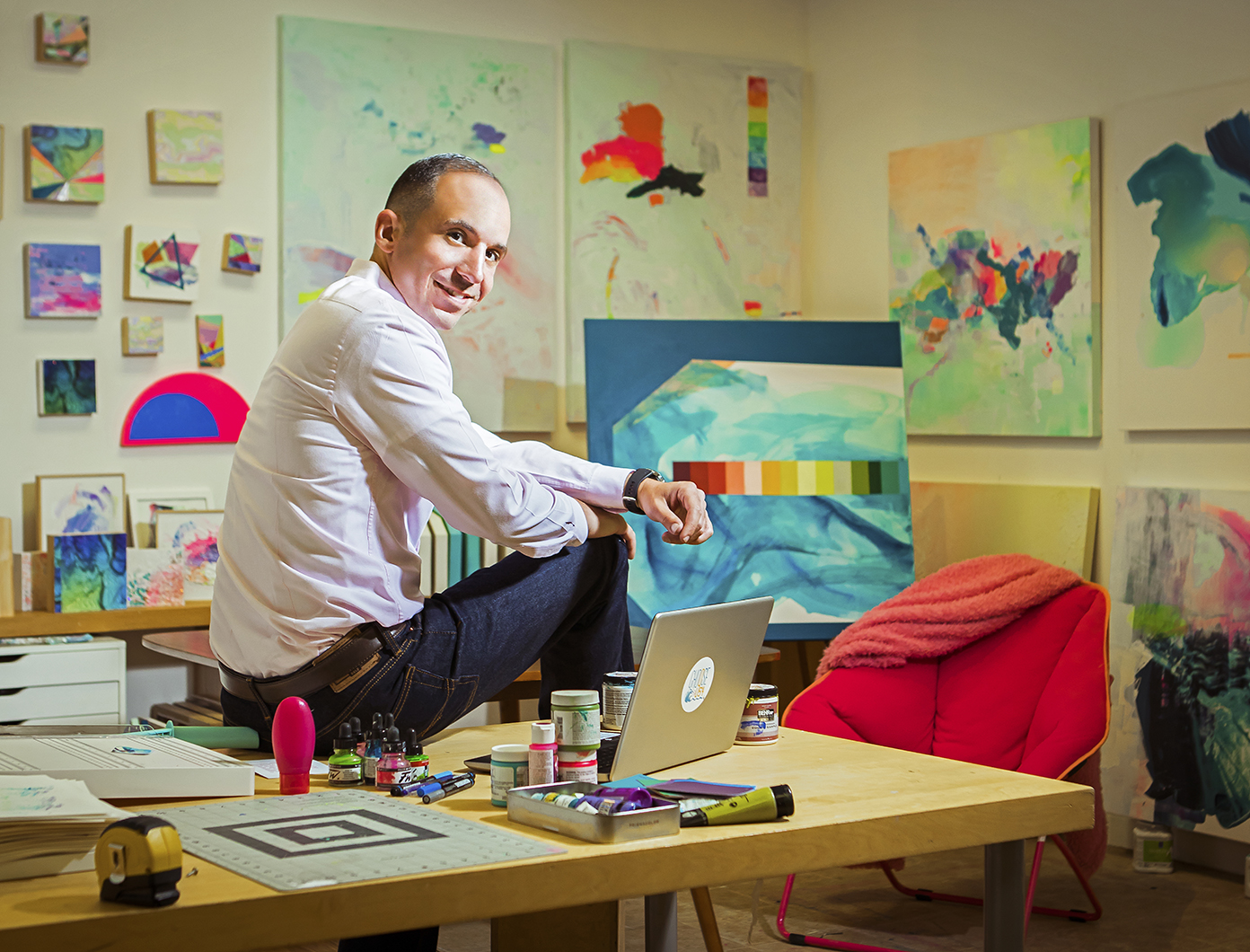 By Nila Do Simon
Portraits by Sonya Revell

The lights have turned on again inside once-shuttered storefronts. And if the proprietors behind Zero Empty Spaces can help it, the lights will never be shut off again.

Vacant retail spaces from Las Olas Boulevard in Fort Lauderdale to Legacy Place Shops in Palm Beach Gardens have been given a new lease on life through Zero Empty Spaces, a year-old initiative that transforms empty stores into working studios for artists. Paint is stroked onto canvases, media such as acrylics and found objects meld harmoniously, and energy fills the room.

It’s an odd time to discuss the retail industry as traditional brick-and-mortar retail spaces grapple with combating the surge of online sales and unexpected economic setbacks related to the COVID-19 pandemic. Nationally, between 20,000 and 25,000 stores are predicted to close this year, according to retail research and advisory firm Coresight Research. Compare that to last year’s 9,302 closures—then a record—and that signals uncertain times are ahead for the field.

Created by arts advocates Evan Snow and Andrew Martineau, Zero Empty Spaces is writing an alternative narrative in the recent saga that is retail space leasing. Together with city officials, redevelopment agencies and building owners, Snow and Martineau search for and identify open spaces to temporarily house artists of various backgrounds. Professional artists to hobbyists can apply for a spot with Zero Empty Spaces, where the specially negotiated rent is as low as $2 per square foot. The program takes care of the rest, assuming all liability, including utilities. As an added bonus, Zero Empty Spaces also hosts a podcast for artists to discuss their work.

“The value we provide owners and property managers and everyone else, between the actual activation and the door being open instead of closed, and between the press and social media marketing opportunities, is huge,” Snow says. 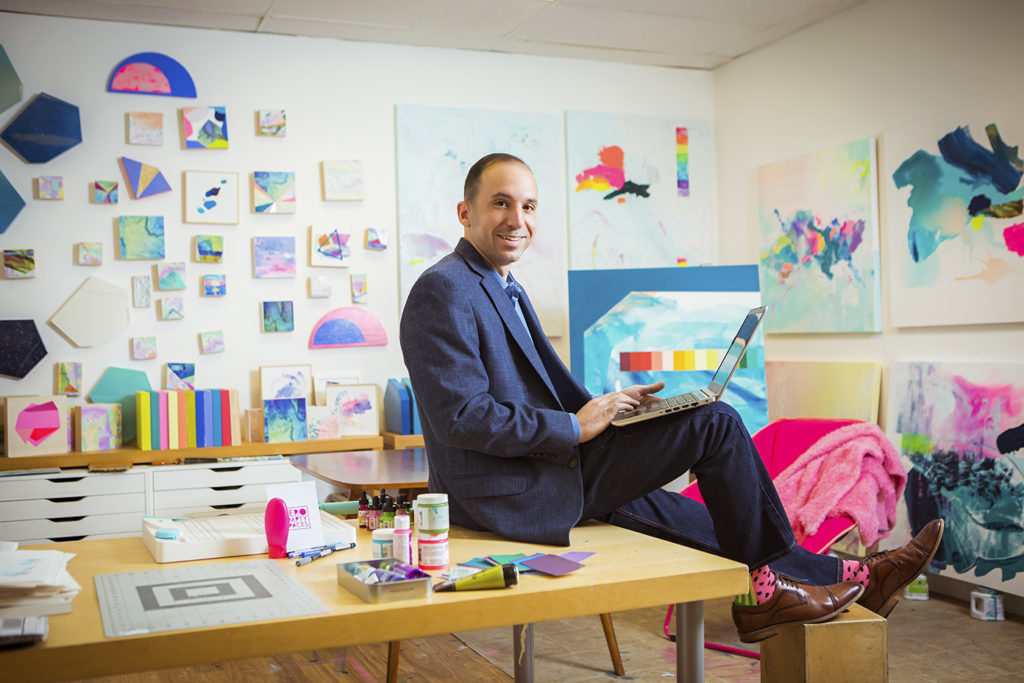 Currently operating in 11 locations, Zero Empty Spaces gives once-empty retail spaces a new lease on life by allowing local artists to use the vacant spots as their studio.

The marketability of an activated space, even during the pandemic, is immeasurable, he says. He uses the example of Las Olas Boulevard, the downtown street known for its ritzy stores, dining experiences and walkability. “If you go out to eat on Las Olas Boulevard and you need to park your car a block down the road, you might pass by an artist’s studio in a Zero Empty Spaces place on the way to and from your car,” he says. “Most people will never go into an artist’s studio, but this one is public and discoverable. From a walkability perspective, when you have the lights on and people can see the activity in a space, it’s an opportunity to continue to engage shoppers in the plaza before they walk back to their car or go into a restaurant. Now they’ve spent an additional 30 minutes in the plaza in a Zero Empty Spaces location, which is half an hour they might not have spent in the retail area had the space not been activated.”

From the artists’ perspective, it’s also a win, Snow says. The pandemic put a halt to the various arts shows and fairs that often introduce an artist to a collector or present new pieces to a consumer. Here, Snow says, is an opportunity for artists to still showcase their work to a live audience for a fraction of the price it costs to rent a traditional studio.

All sides of the partnership operate with the knowledge that the space could be leased to traditional retail tenants after their month-to-month agreement is completed. That happened within 90 days of opening the program’s first space at 914 E. Las Olas Blvd., and then after 90 days at a different Las Olas Boulevard location. Seeing the buzz and activation within the Las Olas spaces, the prospective tenant said, “I like the energy in this space,” and signed a long-term lease.

Bringing local artists to the community’s forefront is nothing new to Snow and Martineau. Since 2016, Snow, a former tech recruiter, and Martineau, who previously was the marketing director at Westfield Broward mall, have partnered to support an arts community that Snow calls “worth advocating for.” Under the self-adopted title “creative altruists,” the pair created Art Fort Lauderdale, a multiday art fair that takes place inside homes and establishments along the Intracoastal Waterway, and Choose954, a marketing vehicle that highlights and cultivates the cultural arts in Broward County.

So far, Zero Empty Spaces has 11 locations throughout Florida, and Snow says he’s fielding calls from additional commercial property owners and managers around the globe. If done successfully, programs like Zero Empty Spaces can leave an imprint not only on business leaders and artists but also on the community. The ability to see art in public places, walk into a studio and converse directly with the artist gives the general public rare access to the creation process.

“The arts have changed my life,” Snow says. “Although I’m not an artist, the arts have given me experiences and connections. Hopefully they can do the same for others.”