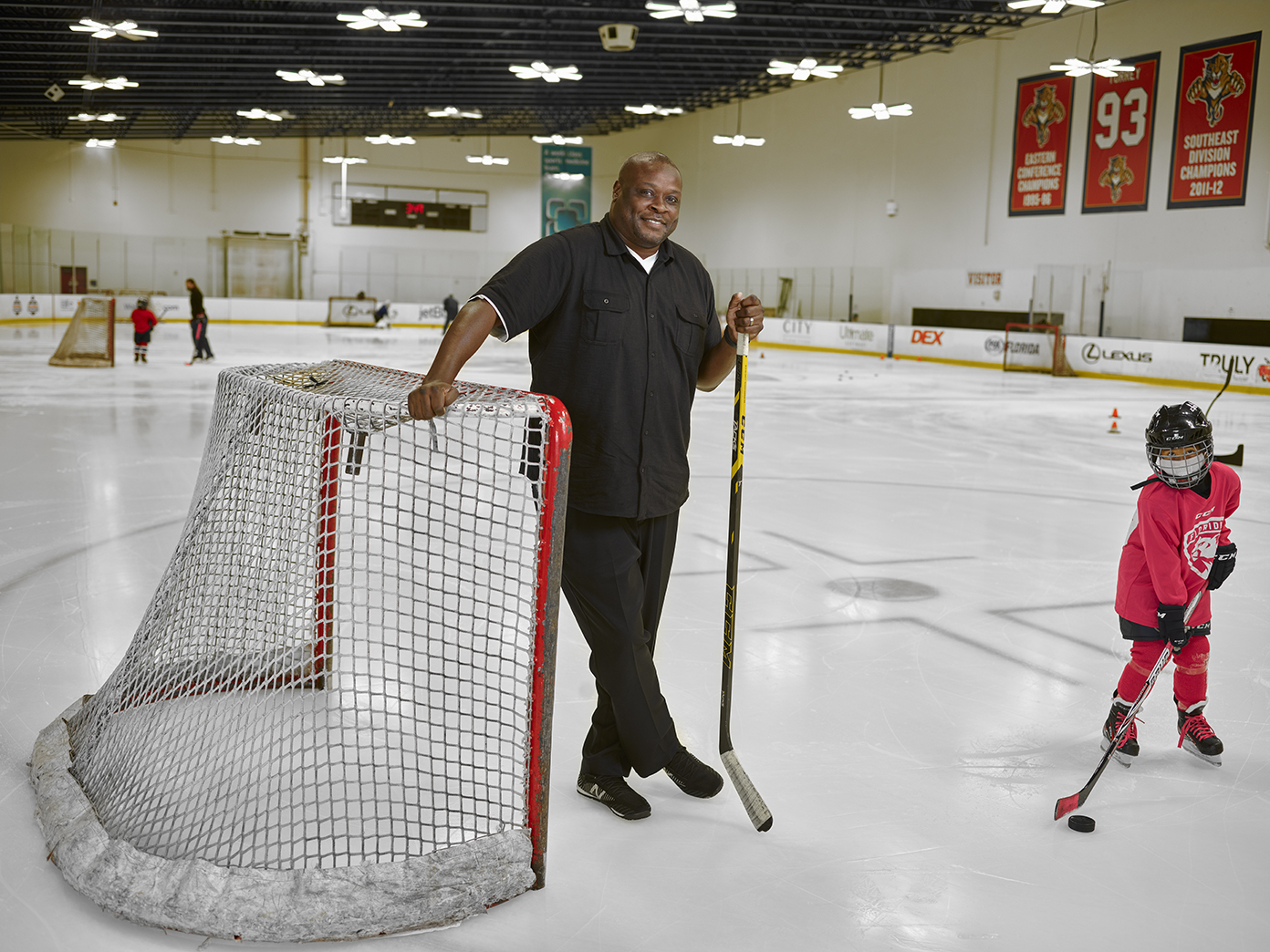 Peter Worrell knows a thing or two about fighting. At a towering 6 feet, 7 inches tall, Worrell rained intimidation and more than a few blows down on his opponents as a star enforcer for the Florida Panthers at the turn of the new millennium. But now he’s faced with a new fight, one for which there’s no precedent, at least not in his lifetime: how to get players back on the ice safely in the middle of a pandemic.

“Hockey is a physical sport played in close quarters that requires a lot of practice, but obviously, new safety protocols require that we make some changes,” says Worrell as he drives to the Florida Panthers IceDen, the 125,000-square-foot training facility where he’s just completed his first year as hockey director. “We’re changing how we run practices and minimizing exposure. That means there’s less batting around, more movement and more distance between individuals. It’s a challenge, but I have an amazing team and we’re getting it done.”

In this new position, the 43-year-old Worrell oversees all operations at the IceDen: administration, management, supervision, marketing and overall direction of hockey programming. More importantly, the role allows him to work at something that’s been of great meaning to him since he first went pro in the 1995 NHL draft: diversifying the sport he loves. It’s a mission that’s taken on more significance in light of the racial turmoil that has swept across the country following the May 2020 death of George Floyd at the hands of the Minneapolis police, and one that draws on the prejudice he faced as a Black player in a predominantly white sport.

“The NHL’s initiative right now is that hockey is for everyone,” Worrell says. “And that’s something I’ve believed for 40 years.”

There are still far too many who aren’t in agreement, making his work that much more important. Whereas scores of Black players can be found in professional sports such as basketball and football, major league hockey remains almost as white as the ice it’s played on, with a 2018 Associated Press article estimating 97% of the league is white.

This troubling history in hockey has come to a head following the 2019 firing of popular sportscaster Don Cherry over xenophobic remarks, accusations of blackface leveled against one of the Colorado Eagles equipment managers, and an independent group of Black players banding together to confront the sport’s severe lack of diversity. Even at the height of the pandemic, racist fans stormed online in April to denigrate New York Rangers prospect K’Andre Miller during a video chat.

In the face of all this, one might wonder how Black players find their way into the sport at all. Worrell’s obsession with the game began as a child growing up in Quebec. His parents had immigrated to Canada from Barbados and pushed their two sons to play sports as a way to fit in. As such, Worrell and his brother were enrolled in every sport imaginable: soccer, basketball, football and even water polo. Once he held an ice hockey stick in his hands, however, something changed.

“I’ve just always loved the game, whether it was ice hockey, street hockey, pond hockey, knee hockey, video game hockey,” Worrell says with a chuckle. “From the minute I first played the sport, it quickly became something that occupied my mind at all times.” 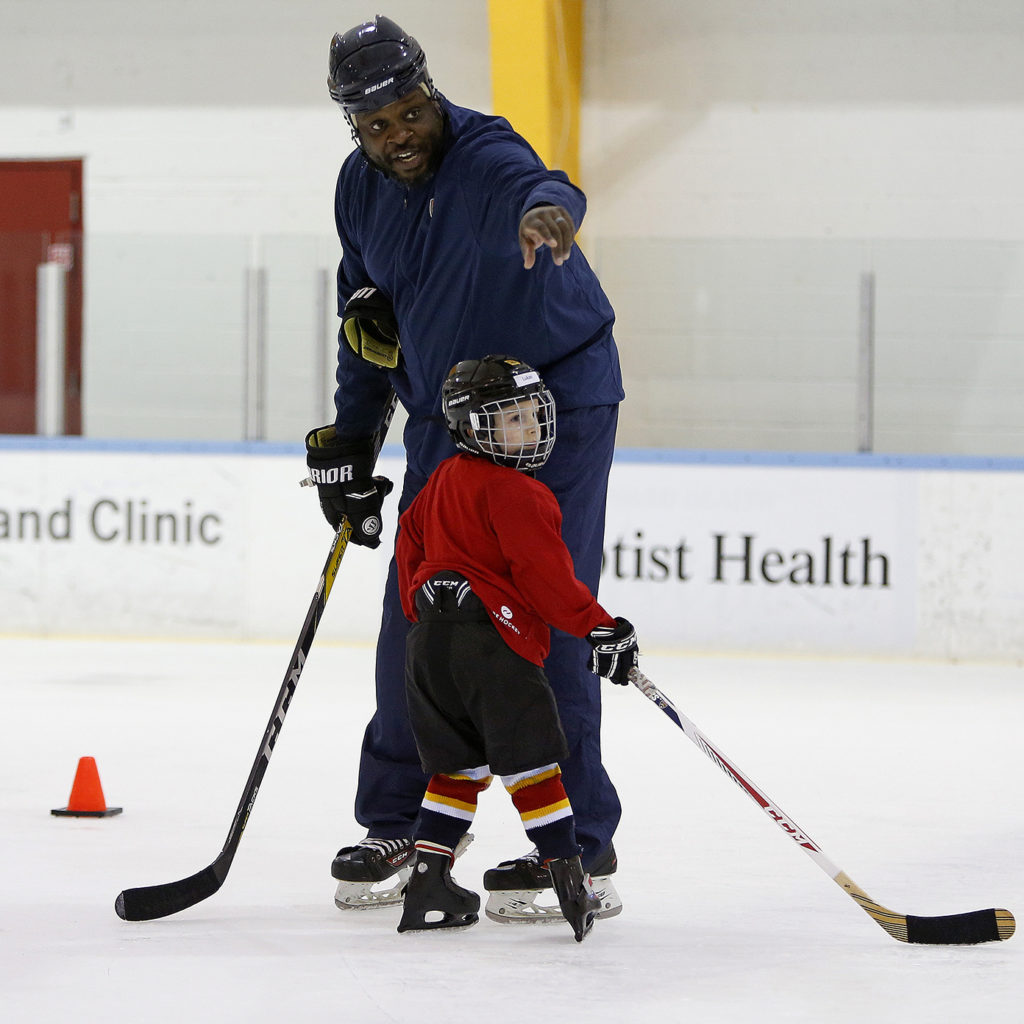 Photo by Eliot J Schechter/courtesy of the Florida Panthers

Although he excelled at hockey and played throughout his time at school, Worrell soon discovered that the color of his skin was a problem for a few people on the ice.

“When I was growing up in Quebec in the ’80s, some parts were very progressive, but some were very…” He pauses to find the right word. “Repressed. There was no such thing as politically correct. The onus was on us to get over what we faced.”

That would only become more difficult as he advanced toward the pros, with perhaps the worst instance of racism he’s ever faced occurring when he was 17 years old in the Quebec Major Junior Hockey League. As he rode out one particularly tough game on the bench, someone in the stands took a bullhorn and spewed waves of vitriol at the young player.

“He spent the whole game telling me to go back to Africa and calling me a monkey,” Worrell says. “Nobody stepped up to say anything.”

Two games into his career with the NHL, Worrell was again called “monkey,” this time by Washington Capitals forward Craig Berube—now coach of the 2019 Stanley Cup champions St. Louis Blues—although Worrell points out Berube apologized immediately following the game. The taunts, the slurs, the racially fueled aggression in an already aggressive sport—it would all continue.

Worrell, however, never wilted, leaning on his community.

“I have a very strong Bajan family,” he says. “We are very proud of ourselves and of our accomplishments, and my father and mother never let anything get in the way of that.”

He also found strength in community with fellow Black players, including his childhood friend Jason Doig—a Jamaican Canadian formerly of the New York Rangers and the Washington Capitals—and onetime fellow Panthers player Kevin Weekes, who became the first Black on-camera analyst for the sport in 2009.

“No matter how much people would try to tear you down or tell you that you don’t belong, we refused to believe that,” Worrell says. “I just wanted to set an example that you can endure, because the game is the game. It doesn’t look at you.”

This solidarity led Worrell to join the NHL’s diversity task force in his early days in the league and continues to inform his work at the IceDen, where he has given himself the mission of diversifying the sport, especially for its youngest players. And it’s been paying off, as participation in the sport in South Florida among marginalized players has grown, according to figures from USA Hockey. The number of Black players has increased 18.6% year to year, in addition to the number of Hispanic players growing 16.1%, the number of female players ages 18 and under rising 34.8% and the number of adult female players increasing 16.9% in the sport. It’s a marked difference from when Worrell was in the league and is likely due in part to the Panthers’ youth and amateur programs that encourage participation and offer low-cost equipment.

“It’s important to me to see more Asians, more Latinos, more African Americans and more women playing the sport and knowing there’s a path they can follow to improve themselves,” Worrell says. “If a child—boy or girl—is able to get a college opportunity out of this, that’s a powerful thing. It can change not only their lives but also their family’s lives for generations to come.”

Returning to the Panthers is nothing less than a homecoming for him—one that keeps him in sunny South Florida, a place he’s come to know as home since he became a nationally known name at 19.

“Coming from Canada, the idea of wearing flip-flops and shorts every day was pretty nice,” Worrell says. “Not only that, but it’s also so much closer to my Caribbean roots. I’ve now spent the majority of my adult life here. I feel blessed to be part of this community.”

It remains to be seen where else Worrell’s path might take him. There’s still one more major goal he has his eyes on: becoming the coach of a major league team. Before returning to the Panthers as hockey director of the IceDen, he spent a few years coaching college and minor league hockey. It only makes sense, considering his strong sense of community and desire to instill the lessons he learned from his parents.

“It’s always in the chalice that I’m chasing,” Worrell says.

It’s an aim he’s certainly being prepared for now, with the dueling trials of COVID-19 and a national reckoning on race providing more than enough of a challenge in his daily affairs. But he sees opportunity in the fight. Maybe one day he’ll coach a professional team far more diverse than any he ever played for or against.

“It only improves the game and its market,” Worrell says. “We spent so many years just trying to be a homogenized sport, but that doesn’t make people feel welcomed into it. It’s changing, and that’s exciting. I think it’s the most beautiful game in the world, and everybody should be able to experience it.”

On the Sunny Side