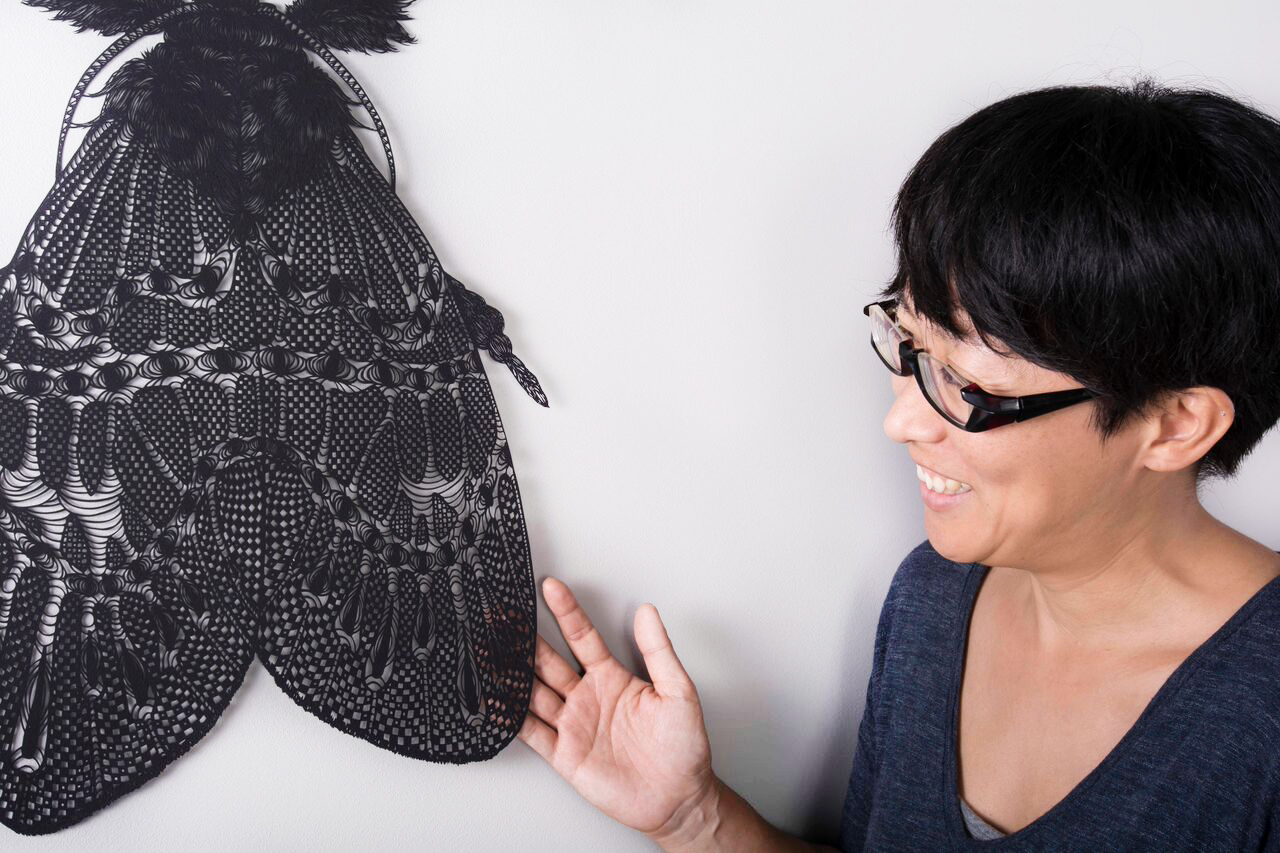 When people see Japanese artist Hiromi Moneyhun’s work for the first time, they go through the process of “Wow!” to “How do you do that?” What they first believe to be a line drawing—an amazing one at that—is, upon closer look, actually a three-dimensional piece that has been painstakingly cut and designed from paper.

Originally from Kyoto, Moneyhun has been turning heads, gluing eyes and dropping jaws with her profoundly detailed, beautifully mysterious paper-cut art since she first put an X-Acto knife to paper in 2010. “In Japan, there is a tradition of paper-cut art that I grew up with,” Moneyhun says of the kirie art form. “I saw it in children’s books. The images have been stuck in my mind since I was a child.”

Self-taught and drawing from a young age, Moneyhun, now 39, moved to Jacksonville, Florida, in 2004. Her American-born husband, Roy (the couple met when he was teaching English in Japan), decided to relocate with their daughter, Nia, to Roy’s hometown to spend time with his aging parents.

It was through difficult circumstances that Moneyhun found her way to the art of paper-cutting. After her husband’s mother suffered a massive stroke, Moneyhun took on the task of being her primary caretaker. When the 24/7 commitment eventually took an emotional toll, Moneyhun knew she needed to do something for herself. “I decided to do paper-cutting,” she says. “I had the paper. I had the X-Acto knife.”

Incredibly, that is all she needs to create her intricate pieces that juxtapose delicacy with powerful images. The multistep process starts with Moneyhun drawing an image by hand on paper. She then makes a photocopy of the original drawing, tapes it on top of a solid black piece of paper, and then cuts the negative space through the two layers. “All of my pieces, both small and large, are one sheet of paper,” she says.

A chance meeting with local artist Nadine Terk led to Moneyhun’s first exhibition at the Grune Family Gallery at Players by the Sea in Jacksonville in 2012. She has since exhibited her work in numerous galleries and museums in Florida and outside the state, including at the Crystal Bridges Museum of American Art in Bentonville, Arkansas.

Moneyhun’s “Shadows of the Floating Worlds” opened recently at Delray Beach’s Morikami Museum and Japanese Gardens, where 2,500 square feet was set aside for her paper-cuts. “Visitors can expect to be surprised and astonished,” says Tamara Joy, chief curator at Morikami, which celebrates Japanese culture and South Florida’s historic connection to Japan. “It is mind-boggling that she does this freehand using an X-Acto knife—her technique and level of skill with this art form.”

Including 22 of her pieces, the show takes its name from Moneyhun’s Ukiyo-e (translated to “floating world”) series, which unites the artist’s exploration of oiran, high-fashion courtesans of 18th- and 19th-century Japan, with her stunning contemporary vision. “My work is still a type of meditation for me, but it’s also painful,” Moneyhun says with a chuckle. “I am in the same position for long periods of time. I can’t stop.”

Beyond the Borders of Architecture