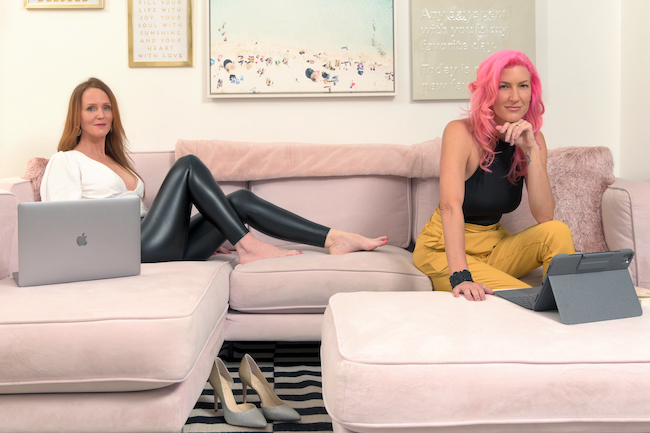 Huddled together in a Fort Lauderdale coffee shop, Beth Arnold and Stephanie LaVigne-Villeneuve easily blend in with the other nomadic workers hovering over laptops and conducting casual business meetings over sips of coffee. But it’s their free-flowing, wild conversations that always clutch the attention of nearby eavesdroppers. “We’re plotting and asking each other questions like, ’Does a shifter have to take off his clothes in order to transform from a hot surgeon to a werewolf?’ Or ‘How would you poison a lover? Would you do it with chocolate?’” Stephanie says. “It never fails that someone asks what we do for a living.”

Until recently, the longtime friends’ profession was a secret guarded so tightly that Stephanie didn’t initially reveal to her husand what she was working on in her free time. In 2016, Stephanie, a mother of three, and Beth, a homeschooling mother of one, attended a writers’ retreat in the Florida Keys that sparked their interest in the world of self-publishing. At first, Beth, who was a marketing maven for startups at a Fortune 500 company before having a baby, wanted to write children’s books, but Stephanie soon turned her on to another sought-after genre in independent publishing: quick-read romance books that are often referred to as “kissing books.” They soon discovered a hush-hush literary world fueled by voracious readers, mostly women, who devour the steamy books at lightning speed. 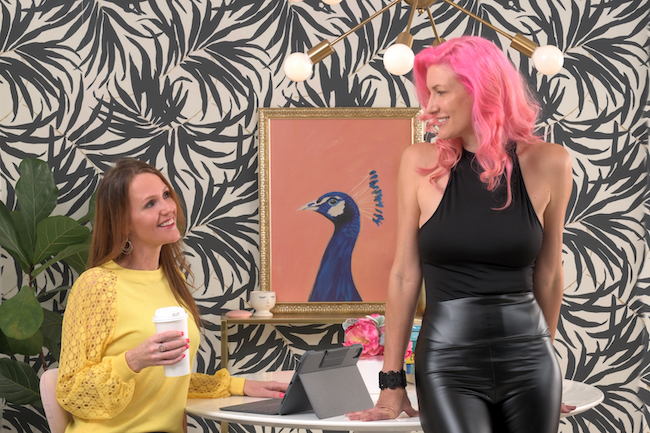 “If you look at Amazon’s ‘Top 100,’ more than half are romance. Some of these women read three to five books a week,” Beth says of the popular e-books that sell for an average of around $2.99 each. “Initially, I wrote a few and made a little money. A couple of years later, I was making more than I did in the marketing world.” Writing under various pen names, Beth found her niche in the sub-genres of “sweet contemporary romance” —which, as its name implies, favors a sweeter side of romance in lieu of blush-inducing sex scenes­­—along with racier “paranormal romance.” “When people hear ‘paranormal,’ they think ghosts. Actually, it’s more like fantasy starring witches, wolf shifters, dragons and fairies.  It transports you from the daily life of doing dishes, laundry and driving kids around to a world of magical cats and hot warriors with nice bodies. It is action-packed,” Beth says, adding. “But I like the cheese of the sweet stories too, because it makes you feel warm and cozy.”

In-between homeschooling her young son, Beth first started writing 100-to-150-page books that would take her a few weeks to develop and write. She can now hammer out much lengthier versions in the same amount of time and publishes around 1-2 books per month. Beth admits her first books were “terrible,” but she and Stephanie quickly garnered knowledge from the indie publishing community, which they describe as welcoming. Making a career out of writing these sexy books that readers swoon over isn’t easy; it means devising plots and strong characters, writing the book, outsourcing covers with designers and then promoting the books through newsletters, Facebook ads and more. “We both employ a team of people who work with and for us to help produce and publish our books,” Beth says. “In addition to having one another, we rely on writer-community support, our Mastermind groups, editors, personal assistants and more. Even though we’re independent publishers, the work is not independent. It takes a village.” Beth divulges that the pandemic year of 2020 delivered her best sales yet, with many desiring the escapism these books bring. “The past two years have been so hard on everyone,” she says. For the first time ever, the author is putting a face to her pen name, Beth Jace—the surname is a reference to Jason, her supportive husband, which will appear on three new books coming out this March. “They’re very Hallmark-esque, full-length novels.” 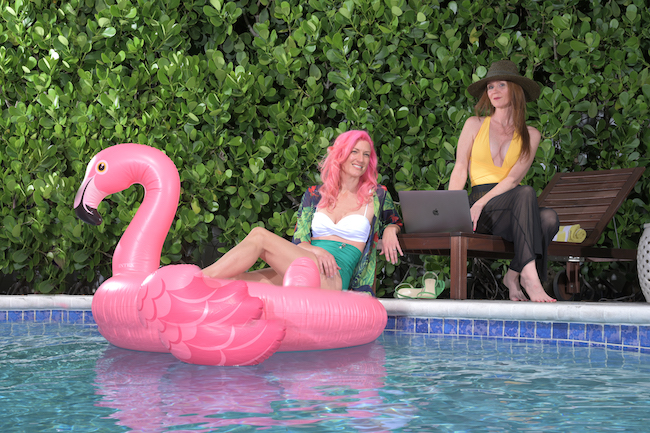 Stephanie, a native of Fort Lauderdale who previously worked as a thriving underwater photographer and architectural interiors photographer, also recently lifted the veil on her under-wraps career to friends and family. On her birthday in 2021, the Victoria Park mom made a formal announcement on social media about her underground writing life. “The reaction was so unexpectedly positive. Random people commented and reached out, and were incredibly supportive,” Stephanie says. “Most people are fascinated that we can make a living from this. It’s even motivated some of our friends to start writing.”

While she was never personally a romance reader, Stephanie gained instant success—and stellar reviews from readers—with her small-town romance books often inspired by home-renovation shows. Think characters fashioned after sappy-sweet HGTV stars like fixer-uppers Chip and Joanna Gaines. “I would often create fictional towns, and play in that world,” says Stephanie, who would have her mother-in-law covertly test-read the books. In the beginning of her writing career, she would be typing as she nursed, and now the mom of three takes advantage of free time in the car to craft stories. “I’m always auto-dictating in my car and can write an entire chapter while I’m waiting to pick up the kids.”

Though Stephanie’s office is still littered with book covers splashed with images of shirtless men, the writer is shifting her focus to mystery novels, a genre that she’s always favored. Her books showcase quirky female detectives and amateur sleuths who accidentally get pulled into the mystery-solving game. With art somewhat imitating life, Stephanie is even working on getting her private investigator’s license and devising two fictional series that take place in Fort Lauderdale. She’s constantly garnering plots from real-life places such as the always-wild Everglades and the Florida Keys, along with head-scratching, only-in-Florida headlines that can include anything from botched plastic surgery to treasure hunters and drug smugglers, and even alligator wrestling or the yachting industry. “I love the hodge-podge of interesting personalities, locations and recreation that creates the wonderfully bizarre place that we live,” Stephanie says. “South Florida has so much fodder.”

Which means everyone around the two women should consider themselves fair game. “If you see us out and about, be careful what you do or say,” Beth says. “You never know when you’ll end up as the romantic protagonist or the evil villain who is magically hexed for life in one of our books.”

The Museum of “Wow!”