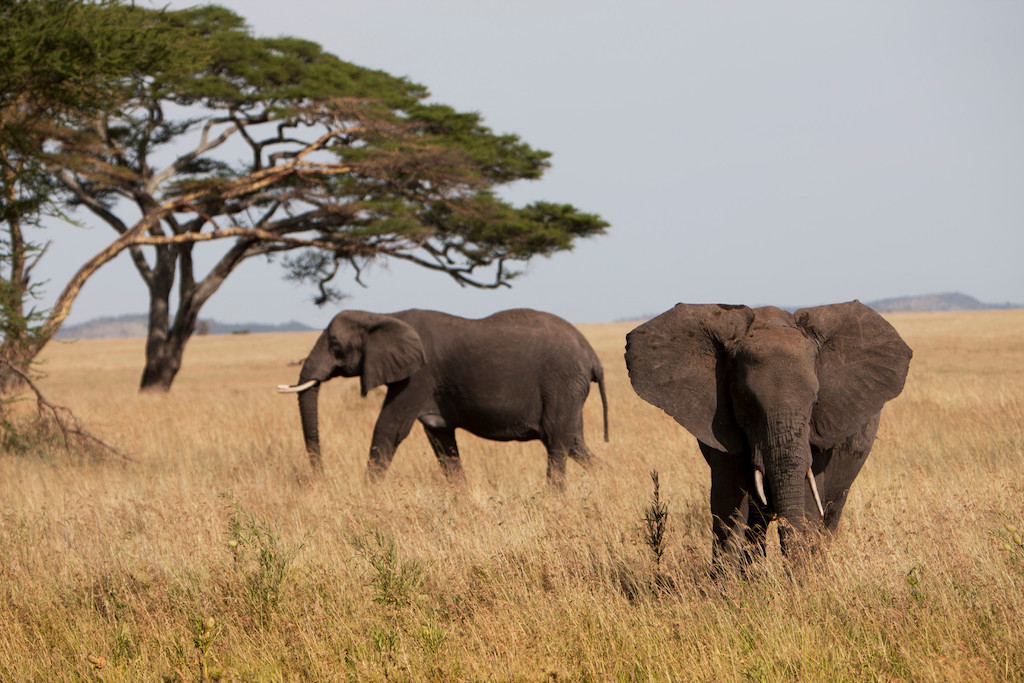 Even if you’re not a morning person, that warm thermos of coffee waiting in the safari Jeep is enough to lure you out of bed, pull on a warm fleece and boots, and cruise off at dawn through the savannah in search of the main attraction—the Big Five. Serengeti National Park stretches across northern Tanzania and is home to local Maasai tribes and the sought-after African animals everyone hopes to cross off their safari checklist: lions, leopards, buffalo, elephants and rhinoceroses. This is the reason you make the day-long journey on multiple airlines, connecting through Nairobi and Kilimanjaro before taking an early-morning flight to Central Serengeti. The journey alone seems like you’ve trekked to the edge of the earth, and when you arrive at the lodge and see elephants gathering for a drink at the nearby watering hole, it certainly feels that way. 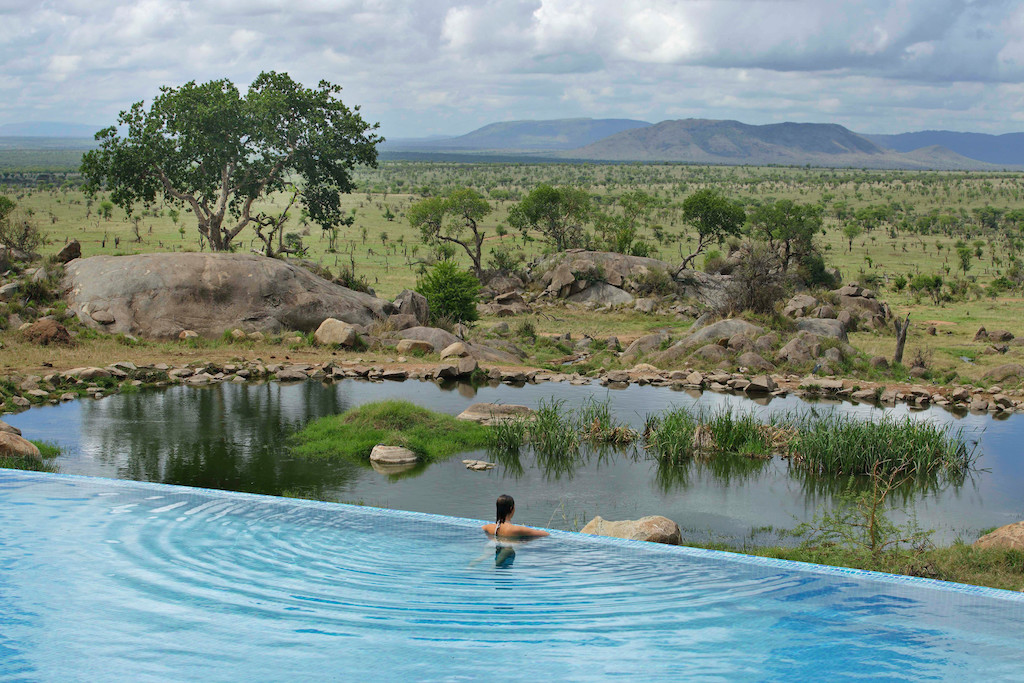 “Journey” is the best way to describe the experience, which is fitting considering that’s the translation of “safari” in Swahili, the national language of Tanzania. The first game drive starts as you make the hour-long trip from the airstrip to the Four Seasons Safari Lodge Serengeti, where you can easily visit all of the region’s best game drives over the course of a day (but trust us, you’ll want to stay much longer than that). The lodge, which sits on a series of elevated platforms and raised walkways (so as not to disturb the surrounding ecosystem), next to an animal watering hole, is also designed to be a wildlife viewing point. And you don’t have to go far to glimpse an elephant—just step outside on your private terrace.

Four-poster beds frame views of the seemingly endless savannah, while sun decks serve as prime perches for stargazing as the sky darkens and shifts to an inky black. If you’re staying in a waterhole view room, you can watch local wildlife like baboons and impalas pausing for a sip as you peer out the window from your deep-soaking tub. Or, for those in one of the five villas, you can watch the show from the infinity-edge private pool. Infrared cameras are constantly live streaming from the centerpiece infinity pool as well (a great place for a midday snooze), so you can switch on the TV and never feel like you’re missing a moment of the action. 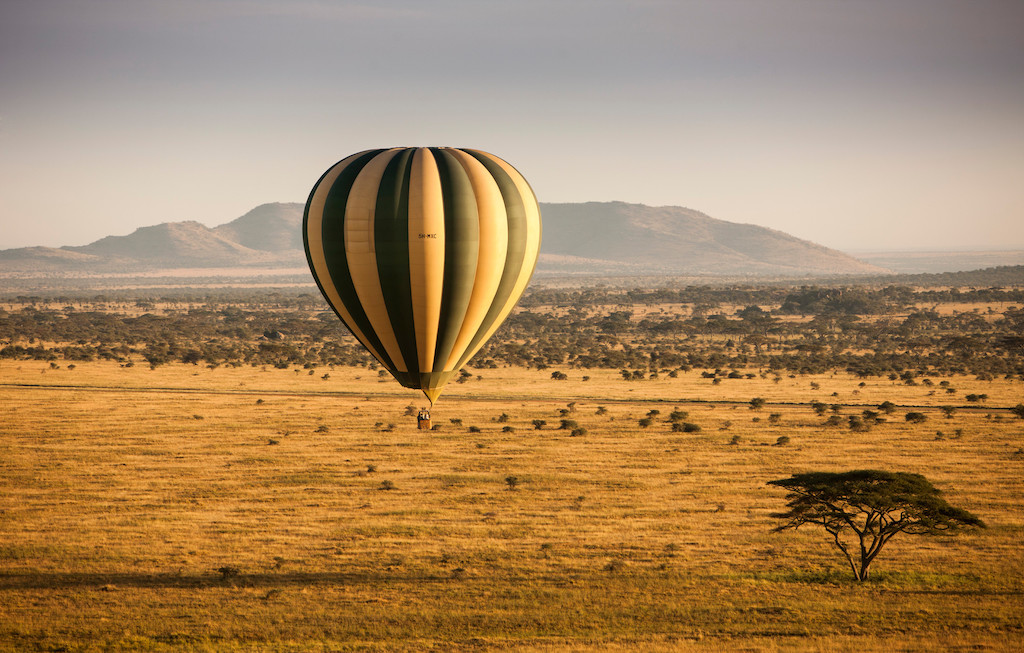 The vast grasslands serve as a year-round stage for the Great Migration, when more than 2 million animals (half of which are wildebeests) make their annual movement across the Serengeti-Mara. Similar to wine harvest, there’s no way to predict the continual cycle and timing of the migration—no two years are alike. The beauty in this is that the Serengeti has seasons, but it’s not a seasonal destination. From January to March, the lush southern plains are feeding grounds, and the wildebeests start calving, but once the grass is gone, herds take flight toward the northwest and central Serengeti.

Even from dawn to dusk, you’ll notice the difference in the animals hunting, grazing or lazily lounging in the bush. At night, the Ngorongoro Crater, the world’s largest inactive volcanic caldera, is one of the best places on the continent to spot the hook-lipped black rhino, while the sausage trees lining the banks of the Seronera River are often where you’ll eye elusive leopards hiding out.

And depending on how you choose to safari—by vehicle, foot or air—you’ll see an entirely different side of the Serengeti. On an hour-long sunrise hot air balloon ride, you’re likely to find herds of lions lying below as you float over the savannah to a champagne breakfast in the bush. During a naturalist-led walking safari trekking with Maasai guides at sunset, you’ll learn more about animal tracks and plants you’d typically miss if you were in a vehicle. 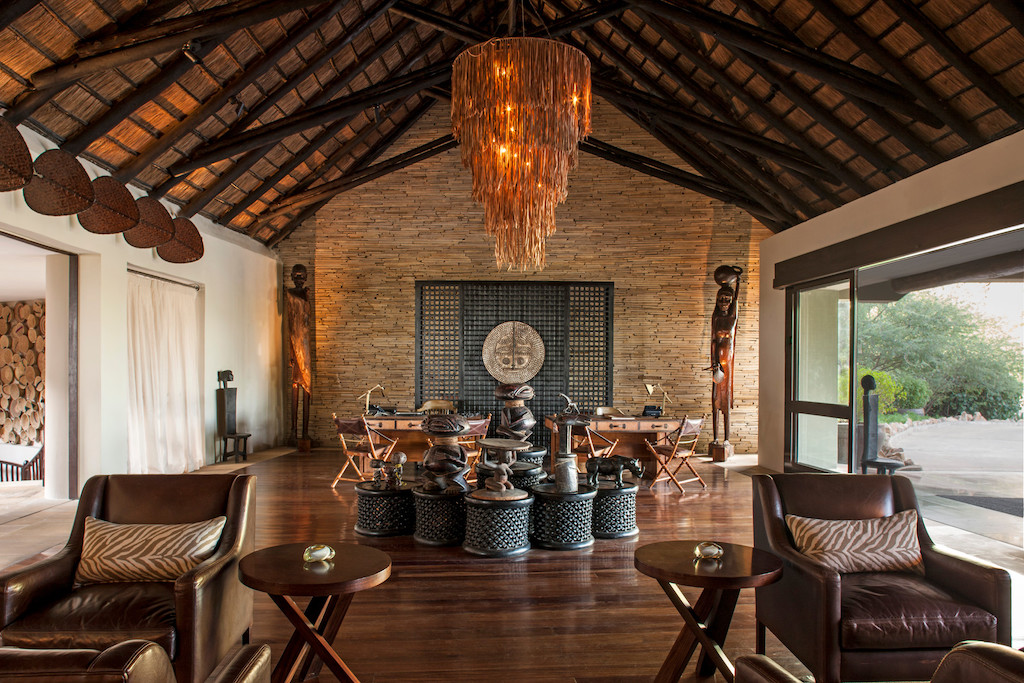 After sundowner drinks, head back to the lodge for an authentic African feast around the open-air firepit at Boma Grill, where the Maasai perform over a dinner crafted from locally sourced ingredients forming dishes like herb-stuffed roasted chicken breast with carrot purée and Tanzanian cocoa bean chocolate with mango compote. For something more intimate, book an evening at The Vineyard in the wine cellar, where you’ll be guided through a seven-course menu paired alongside a premium selection of South African wines curated by the lodge’s sommelier. The Maasai warriors can also stand guard at a torchlit barbecue dinner that unfolds in the heart of the bush, under a celestial ceiling of stars.

In between game drives and dips in the pool, unwind at the spa with an ancestral ritual treatment that takes its inspiration from the surrounding Serengeti and the region’s rich botanicals. The Ubuntu four-hand massage weaves in oils like neroli and baobab from indigenous plants that were sustainably wild-harvested by impoverished rural communities, while the Kifa Massage combines a heated rungu (a Maasai warrior’s wooden baton) and Tanzanian baobab oil for a tension-relieving treatment that will be just the solution to help ease away any lingering jetlag. 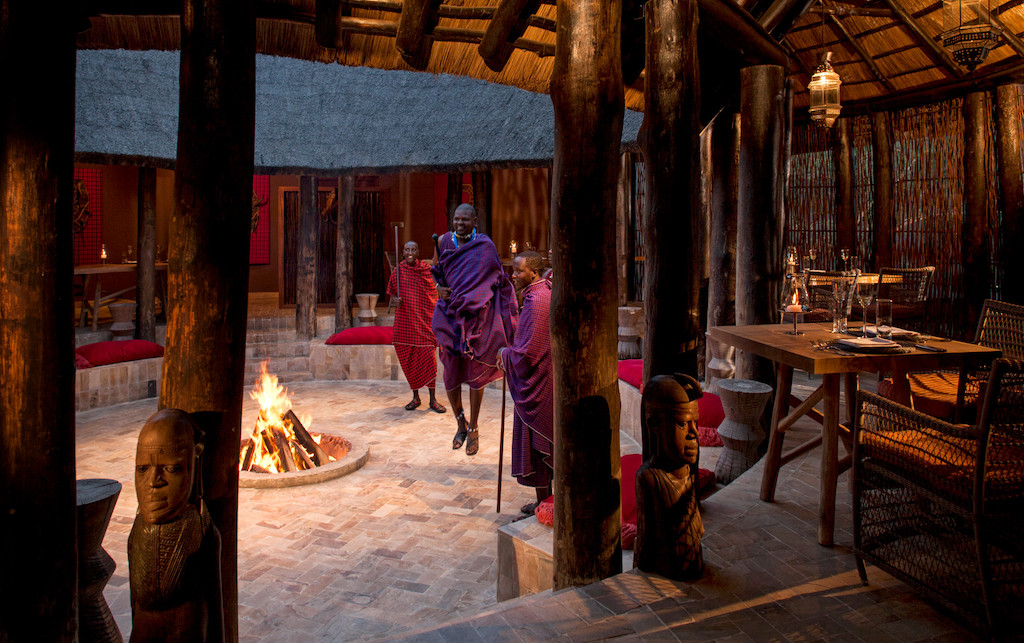 This connection to the land permeates every aspect of Four Seasons Safari Lodge, which has been recognized as an award-winning responsible tour operator. Nearly 75 percent of the hotel’s suppliers are from Tanzania, and products are hand-picked to support the local community and talents of the Maasai women, whose gorgeous, colorful, handmade beaded jewelry is on display at the boutique (sales help support their families). Contributions from game drives and walking safaris also go toward community and wildlife conservation projects in and around the Serengeti, protecting the area’s greatest assets so future generations can also awe over the greatest migration on the planet.

Whether it’s spotting a lioness and her cubs or visiting a Maasai boma (a tribal village of oval-shaped huts), no matter how many photos you try to take, you’ll never quite be able to capture that feeling you get from simply living in the moment—which will leave you longing to come back to experience more.