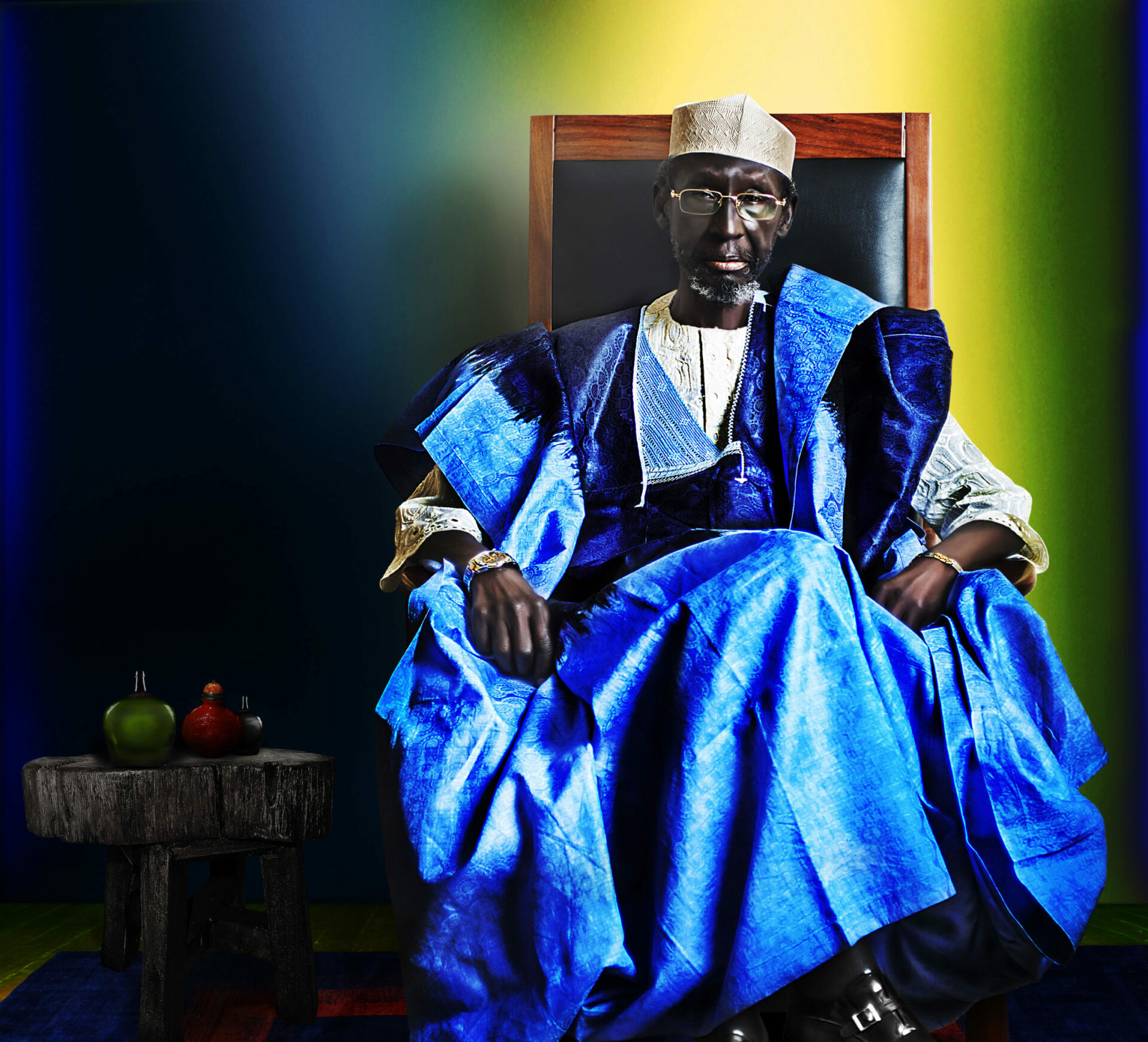 Nigerian-born, New York-based artist Iké Udé is fluent in the languages of fashion and artistry, arenas in which he’s become an arbiter and earned the right to have the final word. Thrice selected for Vanity Fair’s International Best-Dressed List, Udé brings to NSU Art Museum Fort Lauderdale from April 4 to October 31 thoughtful photographs from his portfolio, including two series: Sartorial Anarchy and Nollywood. The former features theatric self-portraits of Udé dressed in varied costumes that span geography and time. The work has gathered high praise, including from online auction house Artsy, which ranked Udé—along with Rembrandt, Vincent van Gogh and Andy Warhol—among the top 10 “Masters of the Self-Portrait.”

After a three-decade absence from his native Nigeria, Udé returned home in 2014 to photograph luminaries in Nollywood, or the Nigerian film industry, honoring the players who’ve made it the world’s second-largest film industry in terms of the number of films produced annually. Ahead of his NSU Art Museum Fort Lauderdale exhibition opening, titled “Iké Udé: Select Portraits,” we discuss with Udé what makes his art so revealing and thought-provoking.

How would you describe your sartorial expression?
Classic, idealized and romanticized, with equidistant sympathies to past and contemporary sartorial idioms.

To some, clothing is functional; to others, it’s much more complex. What’s your viewpoint?
I regard clothing as our codified cultural epidermis or cultural skin. But unlike the biological epidermis, clothing can easily be shed or changed as one pleases. Although it is important to factor in the functionalities of clothing, one must go beyond these primitive practicalities to employ articles of clothing accordingly and lovingly poeticize, romanticize and frame our nakedness picturesquely.

Why was it important for you to be the subject of Sartorial Anarchy?
It wasn’t necessarily important—not at all. That said, consider that no one but Charlie Chaplin or Buster Keaton could conceive, author, direct and perform with the exactitude, imaginative wonder, sublimity and ineffable variegated forms that they each delivered in their respective works. Ditto for Rembrandt or Van Gogh in their self-portrait performances. The essential spirit of an artist’s self-portrait is special and radically different from, say, portraits of other subjects. It’s like having conversations with oneself, or othering the self in a kind of disembodied manner to, yet, embody varied personae and/or identities that may be at odds with the self. In my case, it’s like a catharsis, an otherworldly revelation, sensation and experience. 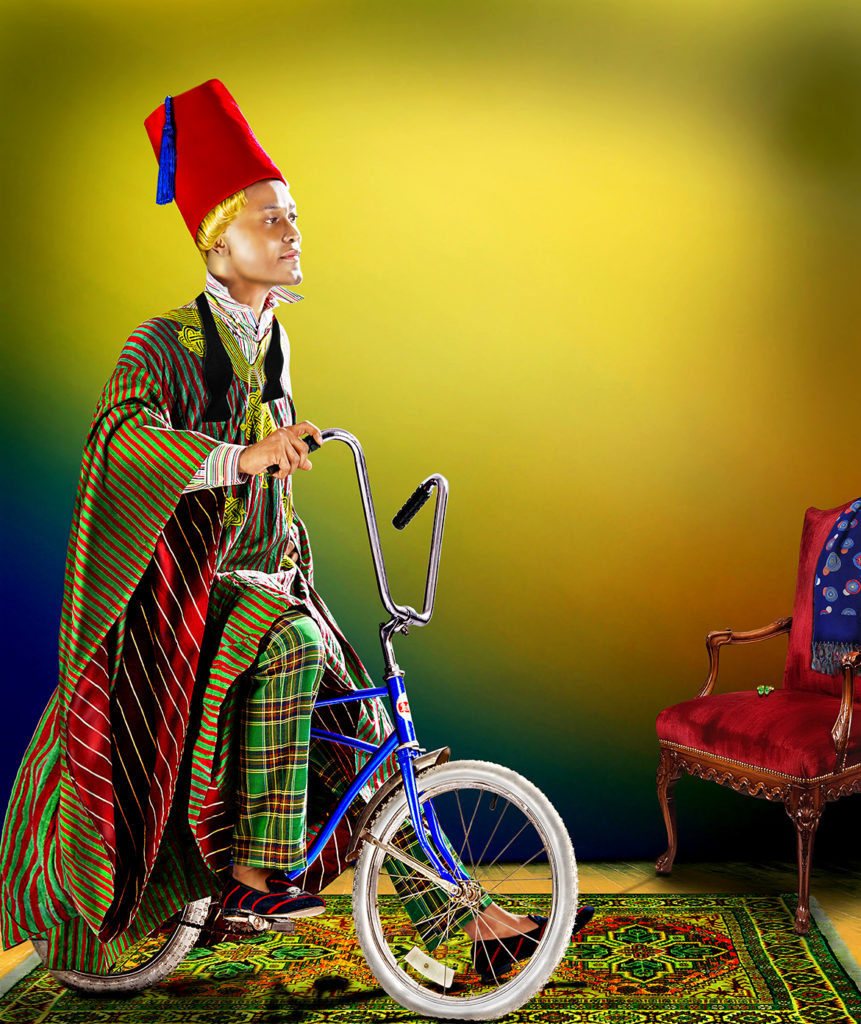 What informed your choices of brilliant and saturated colors?
I’m immeasurably turned on by colors the way some people are turned on by sex, food, drugs, alcohol, religion, music, power, gambling, etc. The more brilliant, the more intense, the more luminous the colors are, the more heavenly and perpetually turned on I am. Music turns me on just as much. I can easily live for over a month—with zero food—surrounded by my favorite colors and soothed by my favorite music, such as opera, classical, jazz, the ragtime music of Scott Joplin, Bob Marley-era reggae, rock ’n’ roll, pop, bossa nova, traditional and contemporary African music, Spanish classical guitar and morna music from Cape Verde. It’s a sublime catharsis like no other, perhaps bordering on a religious experience.

How had you seen Africans presented in film, and why was it important to showcase the contrast in your Nollywood portraits?
To this day, Africans and Blacks are still routinely presented in a rudimentary, rough fashion by the so-called liberal but obviously hypocritical, racist Hollywood industry—nothing new, is there? That said, I wasn’t necessarily trying to showcase Africans in any way other than as themselves. I’m simply celebrating a most vibrant, smart, modish, truly postcolonial contemporary African culture and movie industry that is made by Nigerians in Nigeria and for Nigerians, for Africa and for the world.

What advice do you have for young artists and photographers who are working between art and fashion?
I never liked nor cared for fashion in the general, commercial sense of the word. But articles of clothing or adornments, as codified markers of varying epochs, are truly the index of cultures. Commercial fashion in concert with fine arts is contrived and utterly boring. Commercial fashion is better left for fashion photographers, fashion media and fashion models—they know exactly what to do with the unnecessarily ever-changing fashion collections. Just about every portrait style, except for nudes, has its subject clothed to some degree. So, it’s important when doing portraits of clothed subjects to employ the most aesthetically agreeable items of adornment and clothing to poeticize the sitters respectively, to best advantage, of course; otherwise, the subject is half-a-person and the portrait is merely a visual document better suited for the practical purposes of the courts, customs, the police force and the like.

The New Age of Art