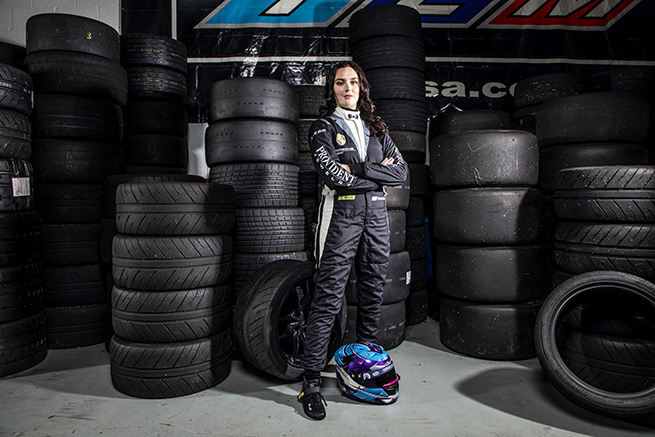 Even when ripping around the racetrack at 160 mph, Hanna Zellers isn’t hyperfocused on her intense speeds. “Once you hit speeds over 100 mph, it doesn’t feel very different,” Zellers says. “Your brain doesn’t have time to pause and think about how fast you’re going. Instead, you’re thinking, ‘Who do I need to get around, and who’s coming up behind me?’ It’s a game where you’re always trying to stay ahead of competitors and overtake the cars in front of you.”

Fighting her way to the front is something the fresh-faced, 24-year-old race car driver is constantly striving for in a historically male-dominated sport. From the moment Zellers throws her long, brunette locks into a ponytail and slips on her helmet—carefully tucking her hair into her suit because it can be a fire hazard—she forces herself to block out any distractions in the frenzy around her. She follows the same ritual before every race: concentrating on relaxing her mind and visualizing what her stint will look like.

“It’s almost like having an out-of-body experience, but you’re still present and need to be a good multitasker,” Zellers says. Settling behind the wheel of the idling car, she ticks off things the engineer instructed her to do, listens to the engine and tries to anticipate how she’ll begin the race and what challenges she’ll face on the track. At the same time, thinking too much instead of relying on her incessant training could result in mistakes that cost her the race, or something much worse. “Overthinking and putting too much pressure on yourself is when things can go wrong,” she says. “It’s a challenge to keep your emotions under control and stay calm so you can drive your best.”

Zellers—who says she’s often described as blunt—is the first to say part of harnessing her emotions means ignoring gender biases on and off the track. While powerhouse Danica Patrick helped thrust female race car drivers into the spotlight with her talent and success, Zellers believes there’s progress to be made when it comes to how women are perceived and promoted in motorsports.

“I spend a lot of time gaining people’s trust,” she says. “Men in this sport deal with it, too, but women have to deal with it on a slightly bigger scale. Each day, as a driver and a private coach, I have to prove to people that I deserve to be there.” 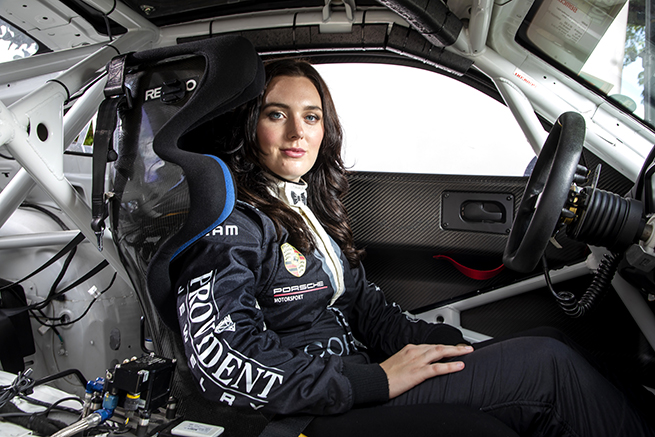 A natural on the track, Zellers earned her racing license in just two days. Most recently, her team landed in second place at the World Racing League’s competition at Road Atlanta.

But it’s not something Zellers dwells on—she was born to race. Her father was an amateur racer, and her parents even honeymooned at the Skip Barber Racing School, the premier racing and driving school where Zellers would later earn her racing license in just two days in 2013. Her mother also dabbled in driving, but the night before her first race, the hotel they were staying at caught fire, and she decided to forgo the race and drive home. “A few weeks later, she found out that she was pregnant with me,” Zellers says.

Growing up in Granger, Indiana, just hours from the famed Indianapolis Motor Speedway, Zellers recalls the television at home always being tuned to racing. Her dad took her to a local go-kart track when she was only 6 years old, and by age 7, Zellers was racing go-karts competitively and racking up wins. “I fell in love with it,” she says. “It’s one of those things where we’d go every weekend and race, and it evolved from there.”

While the young girl relished the exhilaration and power that comes with going fast—the professional go-karts had shifters and could reach speeds upward of 100 mph—it was racing’s intense mechanics that hooked her over other sports she’d tried, like volleyball and baseball. “With racing there’s an engineering aspect, like car setup, data acquisition and strategy,” Zellers says. “There’s nothing more satisfying than adjusting a poor-handling race car into a good one. What I enjoyed most was learning about different avenues that would make me faster, and then being able to apply them and win.”

Zellers escalated from go-karts to open-wheel cars at age 16 and then transitioned to other types of race cars, including sports cars. She believes one of her major strengths is versatility, with the keen ability to drive a variety of cars and quickly adjust to them. Since the start of her career, Zellers has snagged numerous wins, poles—a prime position at the front of a racing event that’s earned during qualifying—and podiums, where a driver ranks anywhere from first to third place. Another impressive career highlight came in 2019, when she became the first woman to participate in the prestigious Porsche Young Driver Academy, a program that pinpoints the racing world’s most outstanding new talent.

Zellers took a huge risk that same year, packing up her car and driving from Indiana to South Florida, lured by the nice weather that presents the chance to race year-round. “I didn’t have any money or savings, and I lived in my friend’s spare bedroom for a year,” she says. The risk was met with great reward, though, with racing and coaching opportunities and even partnerships opening up for the young driver. She now serves as a brand ambassador for high-end Swiss watchmaker Corum and sports a mother-of-pearl-faced timepiece encircled with diamonds when she races.

Zellers currently favors endurance racing, a form of racing where a team of drivers compete together in a single car and take turns driving laps anywhere from two to 24 hours. “It’s different because a lot can happen in a long race, and you get to share the car with other talented drivers and lean on each other,” says Zellers, whose team finished in second place both days at the World Racing League’s competition at Road Atlanta in July.

A resident of Lauderdale-by-the Sea, she runs on the beach and trains at a nearby gym to help her body withstand the heat and rigorous hours spent scrunched in a small car. Much of her time is spent coaching aspiring drivers and hustling to find new racing opportunities, with the ultimate goal of moving back into the IMSA SportsCar series. But as it often goes in the rapidly shifting world of motorsports, Zellers’ dreams of full-time racing were temporarily dashed in February when a big racing deal fell apart, something that’s only pushing her harder to land another full-time gig. “It was crushing, but it’s something that will probably happen 10 more times in my career,” Zellers says. “You can only be sad for so long. I had to get back up and keep swinging.”

Wheels Up with Makers Air