Their story started in January, when Lavernia was spending his birthday night lounging at home. Rusch, fresh off the plane from his first ax-throwing session in Washington, D.C., delayed his celebratory hug to share his newfound inspiration.

“Rusch walked in the door and said, ‘Ryan, we have to open an ax-throwing place,’” Lavernia says. “I turned to look at him like, ‘What are you talking about?’ I thought the idea was insane.”

Despite his disbelief, Lavernia, 32, researched the idea and hopped on a plane to Buffalo, New York, with Rusch to feel the rush for himself at Hatchets & Hops, the city’s first ax-throwing club with the unique addition of a bar. Axes aside, diversity rang through the niche establishment—everyone from older men to young, single women spent their nights experiencing the primal and universally satisfying thud of successful throws.

While Lavernia, the former owner and founder of Colada Cuban Coffee House and Eatery, is not a hospitality novice, the partners agreed they needed one more entrepreneurial mind to fine-tune their vision and execution. Enter Walton, the former general manager of Tap 42. His notable experience in management and bar operations helped Lavernia and Rusch see the full extent of their vision.

After solidifying their plan, the colleagues brought what they call their “Wyoming meets Wynwood” aesthetic to life, from juxtaposing rural decor pieces such as taxidermy with vibrant murals to crafting the culture and liquor list.

Walton, 30, played a hand in cultivating the right image for the bar’s menu to fit Flagler Village’s scene and also ring true to Chops and Hops’ individuality. Guests can expect everything from high-end, locally sourced beer designed for microbrewery frequenters to cocktails designed for Old-Fashioned drinkers.

“I think we’ve gotten to a point in bar culture where every place feels the need to create its own identity through its cocktail program,” Walton says. “I think we’re going to have a really good mixture of not only doing that by offering unique and fun cocktails but also by playing into the idea that nothing’s broken with traditional cocktails.”

All three founders acknowledge the risks involved with marrying alcohol and potential weapons. While the momentum of the hurled ax forces the tool into the target, the actual blades aren’t sharp to the touch. The trio prioritized safety as guests toss axes in the four fully fenced-in bays tucked in each corner of the bar. “It’s safer than you think,” says 29-year-old Rusch, whose business partners teasingly refer to him as the “safety patrol.”

To ensure a safe environment, an on-site “axpert” will host and monitor the experience of each bay and voice any safety concerns, from stumbling guests to reckless moves. The team requires each ax-wielding guest to wear closed-toe shoes and worked to mitigate the chance of excessive boredom drinking by creating an entertaining atmosphere for all. Ax-less bar patrons can socialize in the center lounge or cheer for ax throwers in the surrounding viewing areas.

To enhance the experience, the trio tailored the culture to build community. For $35, individuals who wish to work on their aim will get 90 minutes of throwing time. If your group is smaller than 12 members, expect to join another. Axperts will facilitate bonding within these unions by orchestrating turns and friendly competitions.

Long gone are the sitcom days that glorify routine bar visits with a set friend group claiming the same booth every night. With Chops and Hops Axe Throwing Lodge, Lavernia, Rusch and Walton have created the space to fill an experiential void and engage the Flagler Village community. As Florida natives, the founders know Flagler’s definition of a Friday night is more than fabricated conversation around a table—it’s a night to remember. 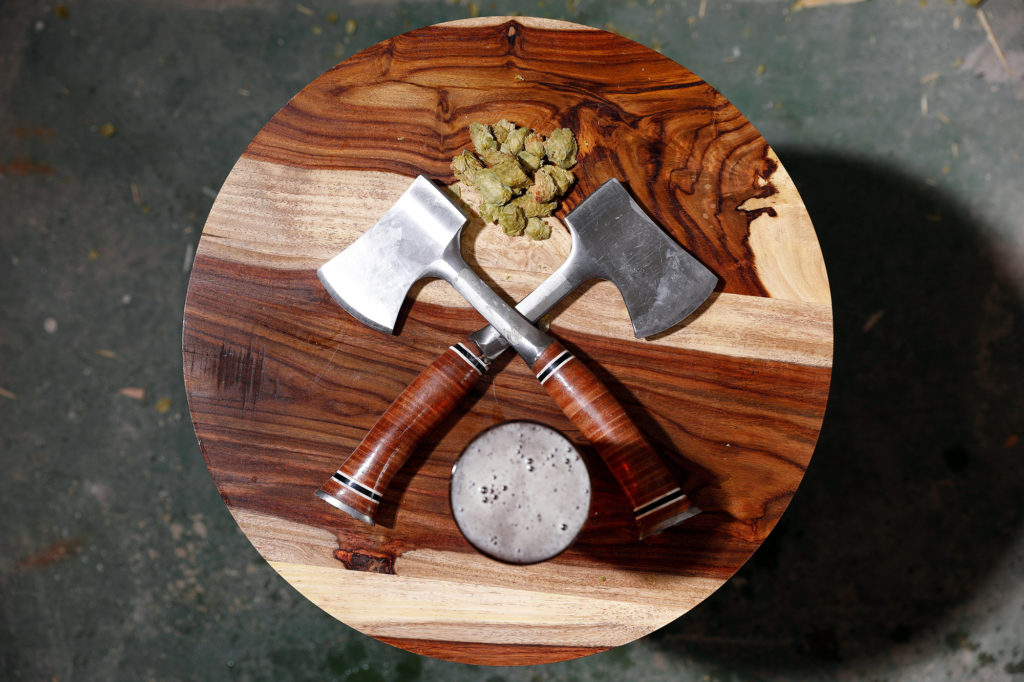 This article originally appeared in our Fall 2018 Issue.