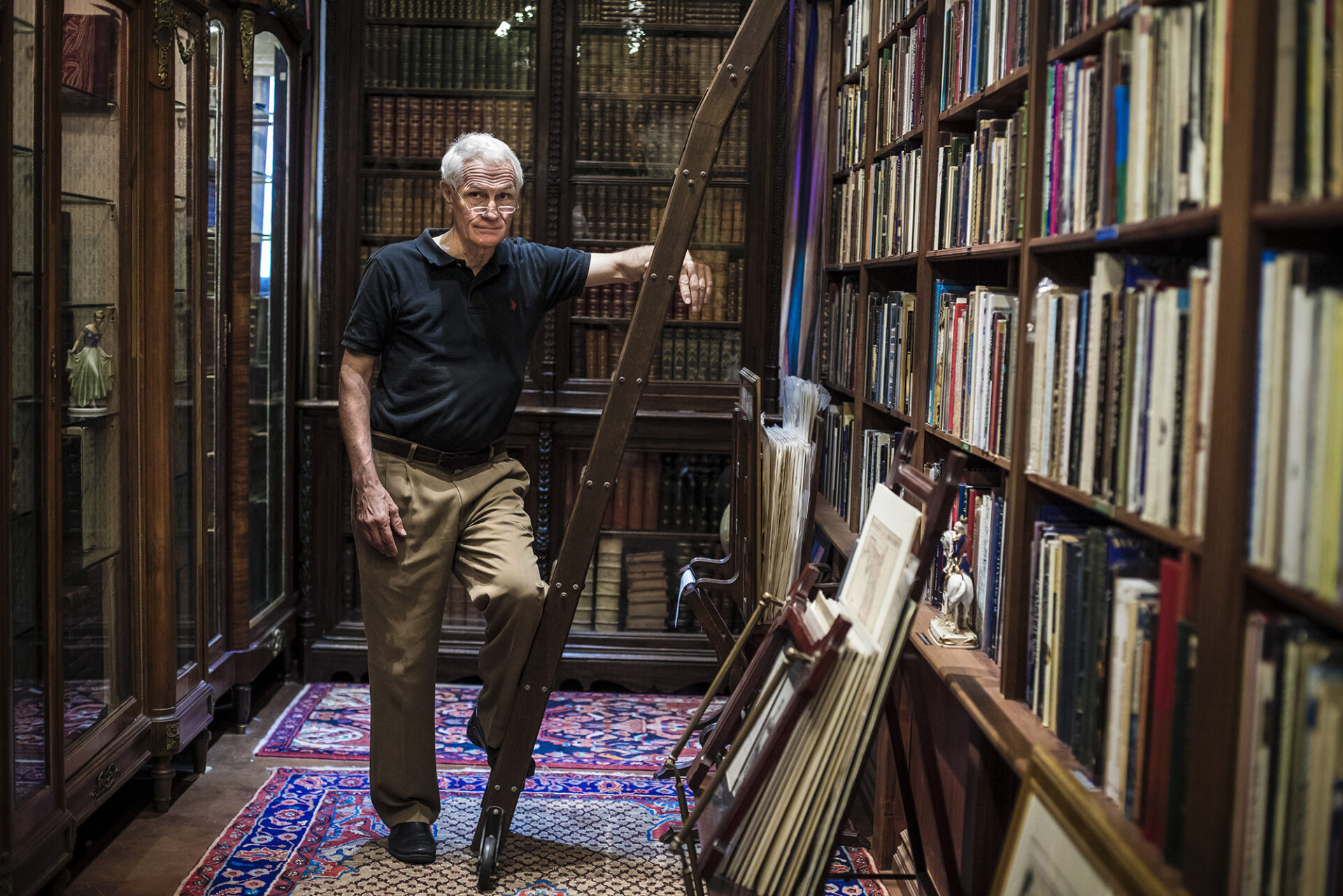 To the outside world, William Chrisant’s shop, located at the edge of an unassuming strip mall in Dania Beach, is simply a bookstore. Wooden shelves brimming with books overlook the parking lot, and white signs advertising $1 paperbacks lean against the store’s exterior glass windows, enticing visitors inside.

Crossing the threshold of the Old Florida Book Shop is like stepping into a fantasyland of treasured texts resembling a miniature Hogwarts Library. In 2011, Chrisant opened the 1,200-square-foot store after taking 18 months to custom build 16-foot towering bookshelves that hug the walls and display more than 30,000 carefully curated books.

“Every book in here I’ve handled, bought, priced and at least leafed through,” the 69-year-old says.

Chrisant’s passion for published texts grew out of his search for hard-to-find books he needed to read during his studies of ancient history and classics at The University of Akron. His professor shared a novel idea that changed his life: buy books from European book dealers instead of borrowing them from the library. After spending $400—a fortune for him back then—and waiting 10 days, Chrisant received The Palace of Minos from England. He ate a lot of spaghetti and butter for weeks but relished the fact that this four-volume set was his to own.

A soft-spoken man with silver hair and thin metal-framed glasses, the Ohio native sometimes reads up to three books at a time, always nonfiction. Currently, Chrisant is reading about the history of genes and a biography on cancer. For him, books are vital to disseminating information, something he craves.

“Fiction is a luxury I can’t afford,” Chrisant says. Traveling to far-off lands from the comfort of his shop doesn’t interest him. Instead he smiles and says, “Learning is much more thrilling than any vacation.”

For other readers, fiction draws them in. Seventy percent of Chrisant’s in-store sales are derived from literature and stories. When appraising a rare book, age isn’t the only factor that contributes to its value, he says. Condition is a key factor (humidity is a killer for books, Chrisant notes), as is desirability. For example, a signed Hemingway book can be much more valuable (think six figures) than a 16th century commentary about religion, according to Chrisant.

Although that may be the case, the oldest book Chrisant owns—a book of hours dating back to 1440—is undeniably a work of art. The religious illuminated manuscript, embellished with gold detailing on vellum paper, took several years to handwrite. As a droll comparison, Chrisant points out that nowadays if a printer doesn’t print within five seconds, the obvious conclusion is that something is wrong with it.

“A book that’s 500 years old has a different aura,” he says. “It’s a different creature altogether that transcends being a book and becomes an artifact.”

His eyes sparkle when recounting the numerous historical documents and colonial maps he owns. Currently for sale: a 1522 manuscript handwritten by Christopher Columbus’ son and a 1787 land grant signed by Benjamin Franklin. With so many treasures, the one he would save from a fire is a palm-sized 2300 B.C. clay tablet written in the ancient cuneiform system.

For Chrisant’s ephemera and antiquities, the internet has been a blessing and a curse. Years ago, as the internet was emerging, this new avenue allowed a wider audience to find his esoteric items—like genealogies, a 1913 issue of Vogue or a 17th century book on Icelandic fishing written in German. Today, with more competition and Amazon’s fingers in everything, his online business has changed, selling much less but for a much higher price. Case in point: A recent online inquiry led to the sale of a handwritten note by Abraham Lincoln that Chrisant had purchased at an auction nearly 15 years ago. That one online purchase amounted to all his in-store sales for the month.

The father of four, who has spent 40 years accumulating his assortment of books, is quick to state he’s not a collector but a businessman.

“Sometimes I feel like I’m selling horse harnesses in 1910 when the automobile is just coming out,” he says. “Maybe books will become obsolete. We need to change with the times, so now I’m focusing on books as artifacts and works of art.”

In an effort to share his wonders with a local audience, Chrisant is lending some of his pieces to “Alexander Hamilton: Immigrant, Patriot, Visionary,” a Nova Southeastern University exhibition on view until April 15 at the Alvin Sherman Library. Hamilton’s story is told through a collection of books, maps, newspapers and art. A few of Chrisant’s pieces that are on display include a land grant signed by James Madison, a book signed by George Washington and several maps from the American Revolution.

This year’s Independent Bookstore Day on April 27 also entices shoppers to share in Chrisant’s admiration for books. It serves as an invitation to wander into his shop and appreciate the craftsmanship of the written word—to caress the soft leather binding, feel the raised type and smell the rag-paper pages, sensations that are near to his heart.

The Old Florida Book Shop offers visitors thousands of ways to be transported around the world and to any time in history.  Through his books, Chrisant offers patrons a way to check out of their daily lives, even for just a few pages.