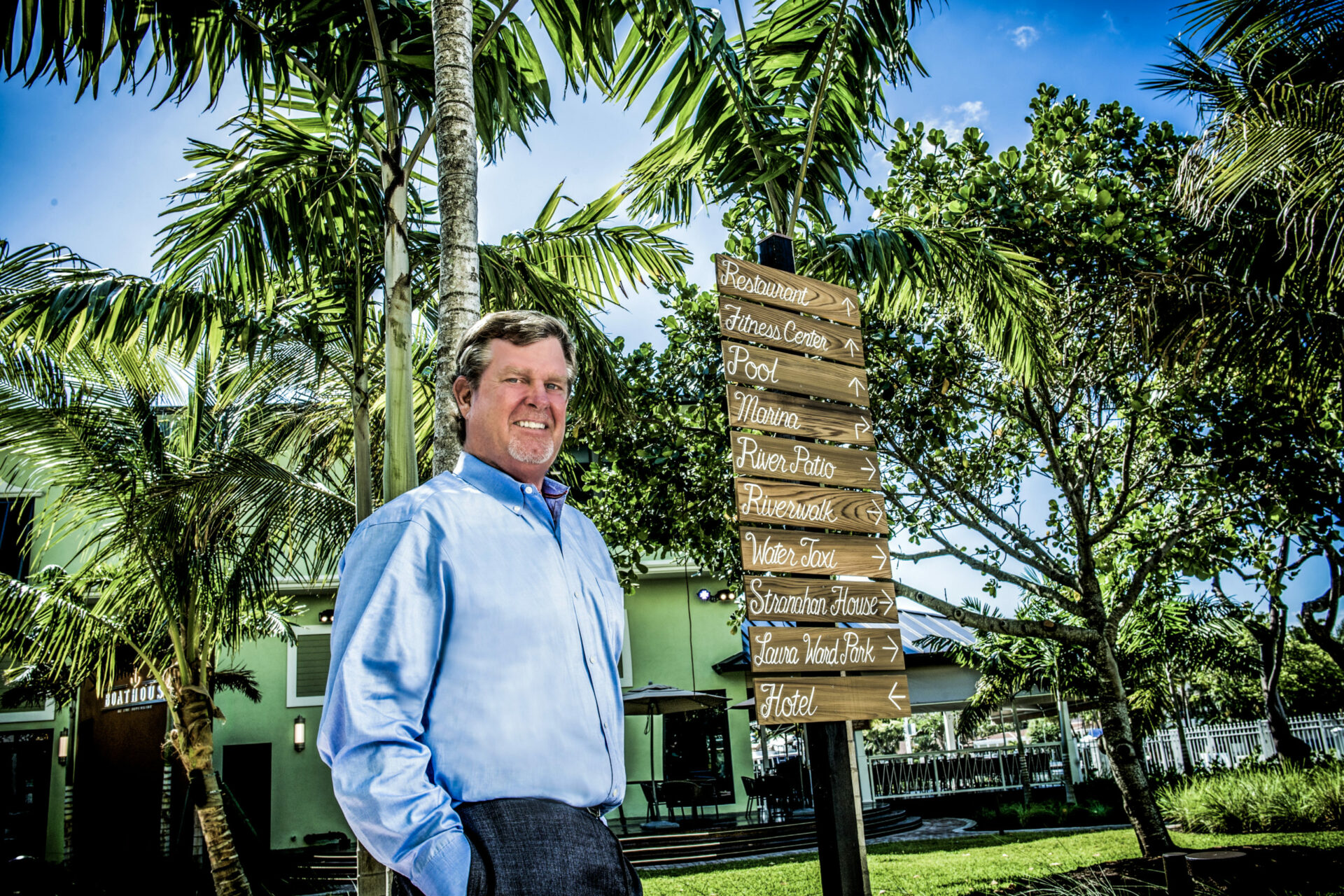 Frank Stranahan was just 27 when he rode into Fort Lauderdale in January 1893, a young man seizing an opportunity to run his cousin’s camp along the New River. Hopefully his expectations were low because he arrived to nothing much at all. Air conditioning was still years away, and Fort Lauderdale was merely a route one took to the fledgling city of Miami. It’s safe to assume that the Ohio native, perhaps in the process of slapping away a hummingbird-size mosquito in South Florida’s tropical humidity, wondered what the hell he had gotten himself into. Luckily, he persevered. And now hundreds of restless elementary school students flock to the Stranahan House each year to hear the story of Fort Lauderdale’s beginnings. Of course, that story is far from over. The 117-year-old Stranahan House sits smack in the middle of a street furiously scrambling its way back into the narrative of the city: Las Olas Boulevard.

The amalgamation of those three words means different things to different people in Fort Lauderdale. Ask around and descriptions will vary, from “humdrum tourist destination” to “the beating heart of the city.” But, oddly, Las Olas has stayed pretty silent during downtown Fort Lauderdale’s recent development boom, which has seen rapid expansion in unlikely areas like Flagler Village and Sistrunk.

That is about to change.

Few have roots that run as deep on Las Olas as Mike Weymouth, the president of the Las Olas Co., the oldest player on the boulevard. His great-grandmother and her two brothers built the Riverside Hotel in 1936 on Las Olas, where it still stands. “They didn’t have air conditioning, but we were one of the first hotels with indoor plumbing,” Weymouth says inside the conference room of his office, which sits across the street from the Stranahan House.

It’s not a stretch to say his family is largely responsible for the Las Olas we know today. His mother managed the Riverside Hotel in the ’80s. Before that, she lived in Europe, where she noticed the prominence of alfresco dining and thought it would work wonderfully on her hometown street. “So that sort of came to the forefront in that period of time,” Weymouth remembers. Still, Fort Lauderdale became a sleepy town after spring break.

“Las Olas would close down for the most part during the summer,” he says. “Leading up to Easter, people used to joke that the lobby of the Riverside Hotel was heaven’s waiting room.” While Las Olas has never lost its natural beauty, it has traditionally struggled to spark interest among locals. Was it pretty to walk down on a Saturday afternoon? No doubt. Not many places in South Florida can compare to the sunny, tree-lined boulevard, ripe with outdoor cafes and gorgeous views of the New River. But Las Olas was also full of impractical retail boutiques and art galleries with price tags that should come with blood pressure medication.

Twenty-two years ago Steve Hudson, the president of Hudson Capital Group, bought a storefront at 811 E. Las Olas Blvd. His recollection of the street back then is no kinder. “It was thin,” he laughs. “Downtown was just kind of getting started in the late ’80s and early ’90s. It was still that sleepy little retail street.”

Charles Ladd’s memory of the street isn’t much different. Ladd, the president of Barron Real Estate Inc., bought property on Las Olas about a half-mile from Hudson in 1995—and Lincoln Road, it was not. But he and his partner saw the street’s proximity to the airport, the port, the beach, the downtown core and some pristine residential real estate. Plus, it had what no other destination in Fort Lauderdale possessed: walkability. He had a feeling this ugly duckling was swan-bound soon. “We looked at that and said, ‘This street will become great.’”

Taking stock of Las Olas today, it’s obvious their patience is about to be rewarded. Much of what’s been rightfully grabbing headlines lately is Las Olas’ impending dining revolution. Right now, four highly anticipated restaurants are preparing to open their doors on the boulevard. This is in addition to the four—the always-jammed El Camino, the waterfront Boathouse, the high-end Etaru and the Red Door Asian Bistro—that have already opened this year. The street’s coming culinary options will include the Italian eateries Talento and Vapiano, the self-explanatory Sushi Shack and the buzzy national steakhouse Del Frisco’s Grille. Ex-Miami Dolphins player-turned-hospitality-mogul Kim Bokamper also recently opened The Balcony, a two-story New Orleans-inspired bar and restaurant that, together with the beloved American Social, will bolster the street’s nightlife. When it’s all said and done, Las Olas Boulevard will have over 1,000 new restaurant seats.

El Camino is one of several new restaurants that have opened or will be opening on Las Olas Boulevard this year. In all, over 1,000 new restaurant seats will be added to the street.

Food has always been part of Las Olas. In the last couple of decades, places like Johnny V, Mark’s Las Olas and Mangos attracted locals—but Mangos is the only one of those left, and Las Olas was in need of new culinary blood. “There’s been a lot of turnover on the street,” Ladd says.

“But it’s exciting because it’s going to be a new wave of people who are fit better with what the demographics in the area have become.”

“We want to make sure we’ve got a proven entity coming in,” says Weymouth, whose company is responsible for El Camino, Vapiano, Boathouse and Red Door Asian Bistro. “You’ll see that virtually all the new restaurants have experience somewhere else. They understand what it’s going to take to be successful.”

Blink in the next year, and you’ll miss some sort of grand opening on Las Olas.

This is precisely the defibrillator jolt so many on the boulevard have been angling toward for decades. But the next logical question becomes: What patrons are going to fill all these new bars and restaurants? Well, by 2020, there will be no shortage of hungry and thirsty residents within walking distance. Five residential developments on or near Las Olas Boulevard will account for a nice chunk of the planned 7,000 residential units under development in downtown Fort Lauderdale.

They will range from luxury towers to smaller, more affordable homes. X Las Olas hopes to capitalize on the latter category when it finishes construction on the old Las Olas Riverfront complex in 2020.

“A lot of us grew up going to Riverfront, so it’s important to us to do something with that space that is good for the community but is also an activated meeting point and replaces what’s been a ghost town,” says Brian Koles, the director of brand and experiences at Property Markets Group. X Las Olas is one of several “X Social Communities” currently under construction in major cities such as Denver and Chicago. These communities hope to lure millennials and creatives to their smaller units with cheaper rent and on-site amenities like a coworking space. When completed, X Las Olas will be the biggest of the X Communities yet at 1,200 units.

About a quarter-mile east, 100 Las Olas is also on pace for a 2020 opening. It will be the city’s tallest building—for now—at 46 stories. In addition to its 113 residences, the building will house a 238-room Hyatt Centric, the first hotel built on the boulevard since the Riverside Hotel.

“I think the revival of Las Olas is a real game changer for the area, but it’s nothing new. This has been in the works for years,” says Peggy Fucci, the head of sales for 100 Las Olas. Fucci has worked on some big projects in Miami, but says Fort Lauderdale is quickly shedding its reputation of living in the 305’s shadow. “As things begin to come to fruition in Broward, you’re not really sacrificing lifestyle. Because soon, Fort Lauderdale is going to be
able to give you all that and more.”

The fight to rescue Las Olas from indifference isn’t over. Weymouth and company are pushing for an ambitious renovation of the streetscape that would remove the median and widen sidewalks to improve the strip’s pedestrian appeal. They will continue to tweak tenants as necessary and strive to perfect the mysterious formula that eludes developers around the world. But things are looking up. If Las Olas’ revival has felt like a crawl rather than a lightning strike (as we’ve seen in areas like Flagler Village), it’s because the street poses obstacles different from other parts of the city.

“Part of the challenge of Las Olas is that it’s an existing street with existing businesses that were never a failure,” Ladd says. “At one point, for example, Lincoln Road was empty. But Las Olas has never started from scratch like Atlantic Avenue in Delray Beach. It’s been a more gradual process. But it’s happening.”

While other parts of Fort Lauderdale seek quick fixes and, as a consequence, experience explosive—if a bit unsustainable—growth, Las Olas has been a slow burn, shifting and swaying along with the city and its demographics. So, when you think about it, there may be no more accurate place to take the pulse of the city than here. If what we’re seeing on Las Olas now is any indication of the city’s heart rate, Fort Lauderdale is heating up. And it might never be the same.