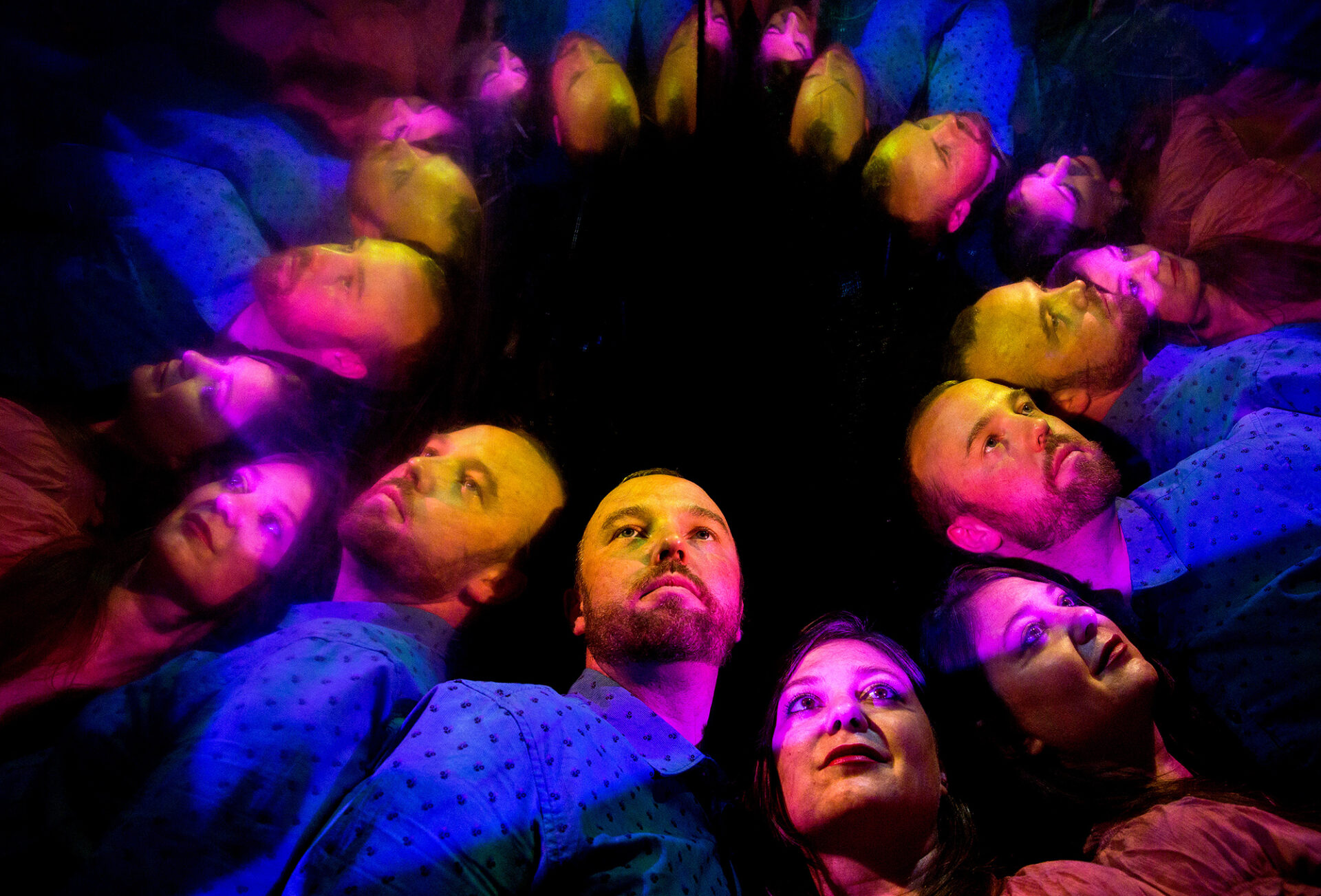 No matter where you live in South Florida, you’re bound to run into Leah Brown and Peter Symons’ work within the next year. The husband and wife—who are most widely known for being part of the principle engine behind Fort Lauderdale’s FATVillage Arts District, along with developer Doug McCraw—have become a powerhouse team of artist-curators and will have pieces displayed in locations from Delray Beach to Miami. Most of them will be hard to miss, with the best example being Tower Lights, a luminous and interactive makeover of the downtown Fort Lauderdale water tower set for completion in spring 2018.

When speaking to the couple, both 35, about their work, it’s hard to tell where the influence of one person ends and the other begins. They finish each other’s thoughts and seamlessly join ideas to form playful designs. But it hasn’t always been like this.

Brown and Symons met as undergraduate sculpture students at the Rhode Island School of Design 17 years ago. For a time, each pursued their own career path in parallel lines: Brown exploring the secret life of dreams and Symons programming what he calls “mechanical synesthesia,” mixing the senses with technology. When Brown earned a spot in the hip Hub-Bub Artists in Residence program in South Carolina, Symons followed. When Symons got into the Pratt Institute to pursue his master’s degree, they moved to New York City. 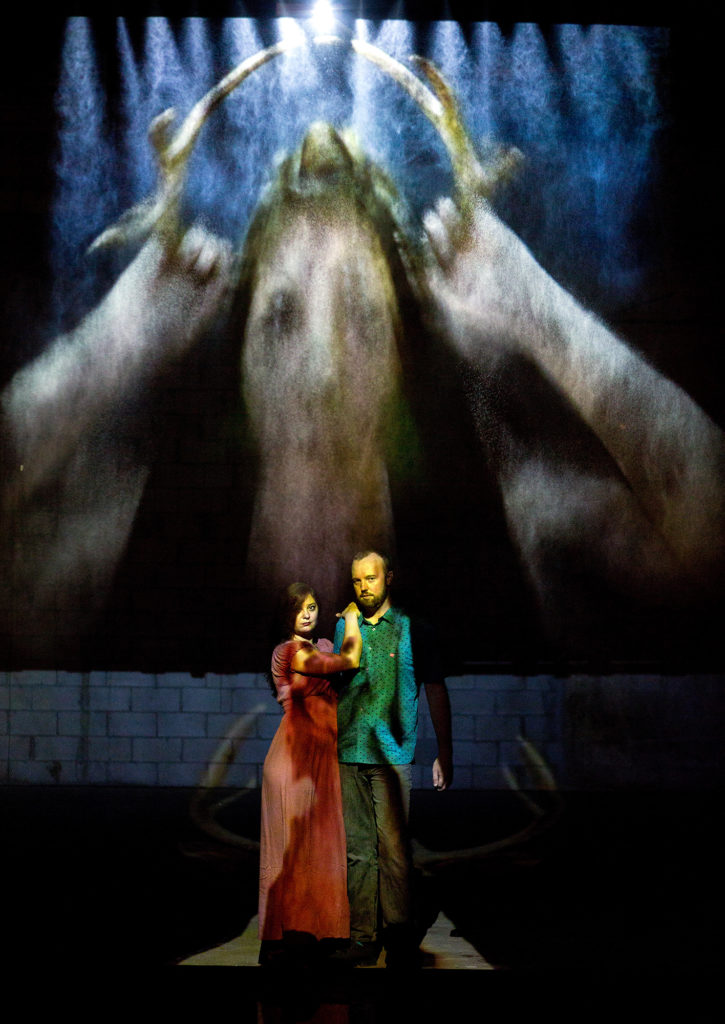 They were committed to each other’s individual artistic journeys, but they also knew it would make sense to join forces. They just weren’t sure how. “We’d go on long walks trying to figure out how to work together,” Brown says.

They come from such different backgrounds, after all. Symons was born in Cork, Ireland. His family immigrated to the United States in the early ’90s (“Six kids, two parents, a dog and three suitcases, as the story goes,” Symons says). As for Brown, she was born in Washington, D.C., but raised in Asheville, North Carolina, a place whose woods and waterways still find a reflecting surface in her work.

“It was hard to see how to collaborate until we finally figured out that my work is about content and Peter’s is about process,” Brown says. Right around the time they hit upon this newfound way to work together, they also had a daughter, Juniper. In fact, in 2014, the night they were being awarded an $80,000 Knight Arts Challenge grant to operate the Projects arts space in FATVillage, Brown was still in the hospital, having just given birth.

Pixel Twist, a permanent public installation on the exterior wall of the Pembroke Pines City Center to be unveiled in November, is a perfect example of how the couple works today. The piece is a 7-foot-by-16-foot wall mounted on an aluminum frame with movable polypropylene cylinders. The individual cylinders are black and white, so when viewers first look at the installation, it feels a little like a crackling TV set. Visitors are invited to play with the cylinders, pulling images from the static.

On one level, the piece is about cosmic background radiation, the Big Bang and how shapes emerge from stasis, Symons says. On another level, it’s about what it means to communicate and collaborate. “We were definitely thinking in digital terms when we made it,” Brown says, “but we were also thinking of the audience. When you look at the piece, it’s reminiscent of early video games, but also of cross-stitch.” The piece, in other words, is a meeting of worlds—Brown’s and Symons’— but it’s also about the place where the artist meets the viewer.

“I really like when the form of a piece becomes less about what I decide and more about what the crowd decides… crowd-based composition,” Symons says.

This kind of interaction is something many of their collaborative pieces have in common. Light is another feature—the way it plays off surfaces and alters perception, bringing colors together and taking them apart. Sort of like a rainbow. Rainbow, as it turns out, is their daughter’s favorite color. 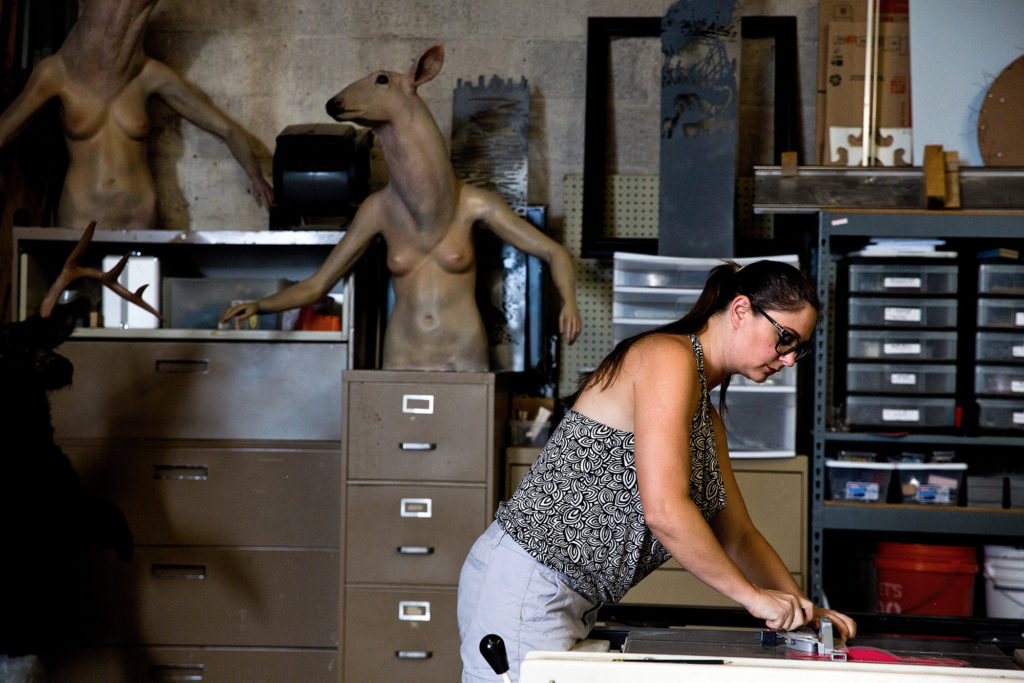 AT WORK: Brown, whose background is in sculpture, says her work is influenced by the nature she saw growing up in North Carolina.

In the Company of Giants