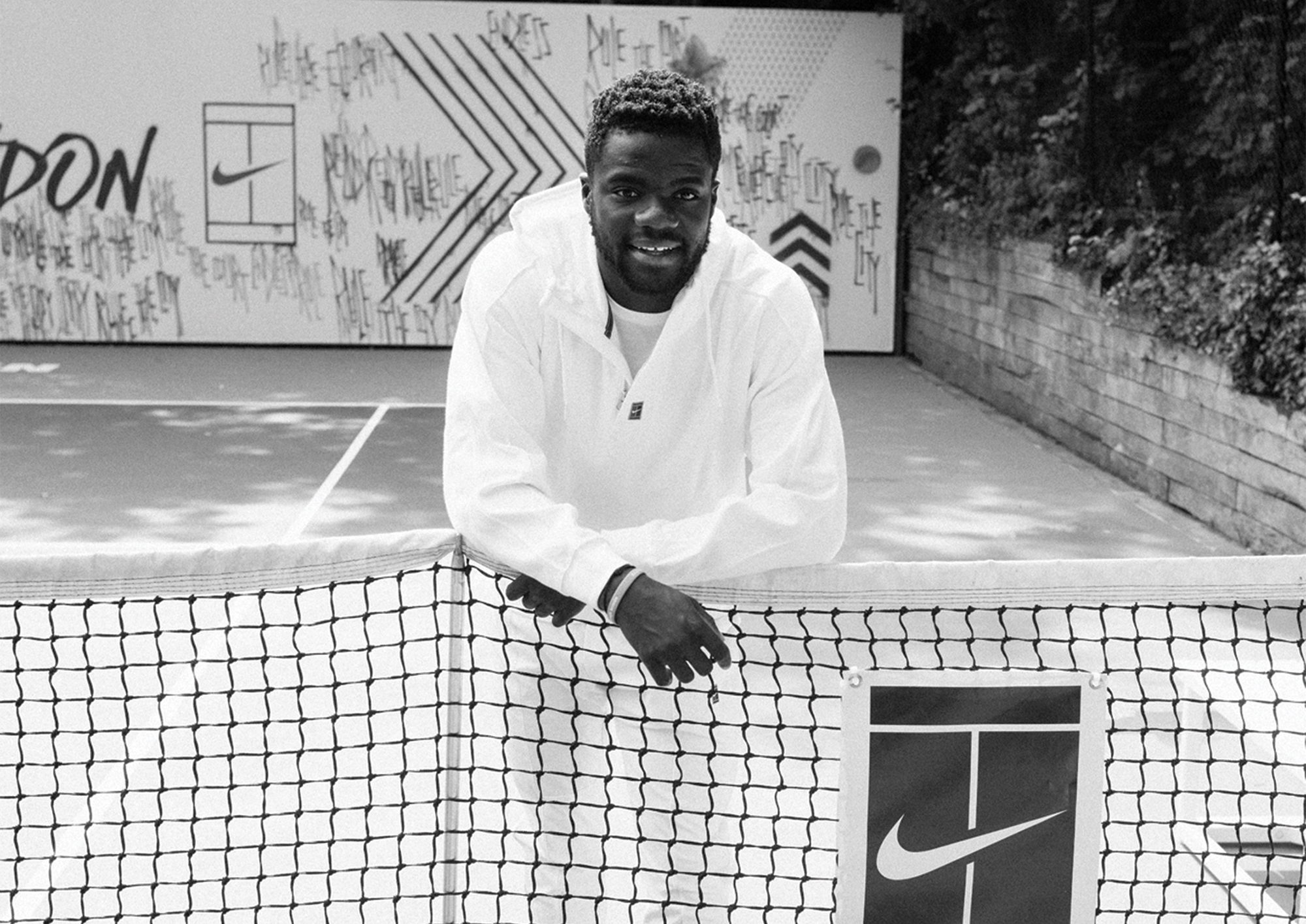 By Nila Do Simon
Photography courtesy of Nike

Frances Tiafoe wasn’t supposed to play tennis. He wasn’t supposed to pick up a racket, much less become one of America’s best hopes since Andy Roddick to win a grand slam. But against the odds, Tiafoe is that man. The son of immigrants from Sierra Leone who were barely familiar with the sport, the 20-year-old is now ranked No. 39 in the world. Tiafoe has stepped up to become not only the nation’s next great tennis player but also one of its most electrifying ones.

Tiafoe’s story begins before he was born, in the war-torn West African nation of Sierra Leone and on the precipice of a decade-plus civil war that took thousands of lives. As turmoil swarmed the country, Frances’ father, Constant Tiafoe, left Sierra Leone and eventually landed in Maryland. There, he worked as a laborer, helping to build a premier tennis training facility. Management took notice of his work ethic and offered him a position to maintain the center’s grounds. Staff arranged a makeshift room for him at the facility, a modest 120-square-foot office-apartment that he oftentimes shared with twin sons, Franklin and Frances, when their mother was working night shifts at a nursing home.

From 1999 to 2010, Constant and his sons lived in that room, which was within mere feet of some of the best youth tennis coaches in the nation. From a distance, the twins would watch and mimic the children of senators, politicians and other societal members who paid about $27,500 a year for a full-time junior program, a far cry from the starting salary of $21,000 that Constant received. After the courts cleared, the Tiafoes would play. When the twins were 5, the facility allowed the boys to enroll in its clinic for free.

Out of the two, Frances was more drawn to the sport than Franklin, waking up early to hit balls against the wall and zoning in on the Tennis Channel any chance he could get in front of cable television. Coaches started noticing Frances’ talent and love of the sport and eventually took him under their wings, grooming him into the professional he is today.

The best way to recognize Tiafoe on the court is his forehand, a looping, unorthodox stroke that finishes with a blinding racket head speed that often generates winners at greater than 110 mph. It’s a forehand that’s cracked winners over Roger Federer in Arthur Ashe Stadium at the U.S. Open, and over 2009 U.S. Open champion Juan Martin del Potro at the 2018 Delray Beach Open—a tournament that saw Tiafoe hoist the victor’s trophy. As the young American looks to defend his title in 2019, he sits down to chat with us about his love of the sport, his goals and how his family helped shape him.

What do you love about tennis?
This sport has allowed me to travel around the world and play against the highest level out there, so I feel blessed. I’ve walked around Tokyo and someone has recognized me. But breaking it down, it’s a sport that features two players facing off against each other in a packed stadium, which is a unique concept.

Growing up in Maryland and sleeping at your dad’s office, did you imagine that you’d ever be playing in front of a huge crowd?
Not really, but that experience put me in a position to work toward this. I didn’t have any doubts that I could achieve a lot in tennis because I believed in myself, especially because of all the time I put into practicing. But initially, my goal wasn’t to play in front of a crowd against the top players in the world; it was just to help me and my family.

Why do you think you were able to rise against the odds?
In the moment, you’re not thinking about too many life-changing things. You’re just being a kid; you can’t make situations bigger than they actually are. But I eventually acquired that goal of being a top tennis player, and I wasn’t going to let anything get in the way. The way I see it, the sky’s the limit.

Where does this confidence come from?
It probably comes from my dad. He’s a confident individual. We’ve had long talks about being confident and not losing yourself. It’s important to be humble, but you definitely need to have that chip on your shoulder when you walk out on the court. I owe that to my parents, who worked day and night when I was young. There were some great guys playing on those courts I grew up on, senators’ kids, mayors’ kids… Things were different for them. My parents talked to me about that a lot, and there was no point in feeling sorry for my situation.

What are some memories you have of the 2018 Delray Beach Open?
Delray has a special place in my heart. I know the area well because I did camps in Boca Raton as a kid. The crowds are great and always cheering for me. My dad was able to spend the whole week there with me, and everything fell into place at the right time. It was definitely special. After that big win, I felt I was a completely different player.

What are your goals for 2019?
I’ve thought a lot about this past season, which overall was unbelievable for me. In 2019, I want to win a couple more titles and get into the Top 20. Ultimately, I just want to keep getting better. But the big picture is to win a major and also take care of my parents and my brother.