From Humble Beginnings to High Society: How the Iconic Shutterbug Got His Shot 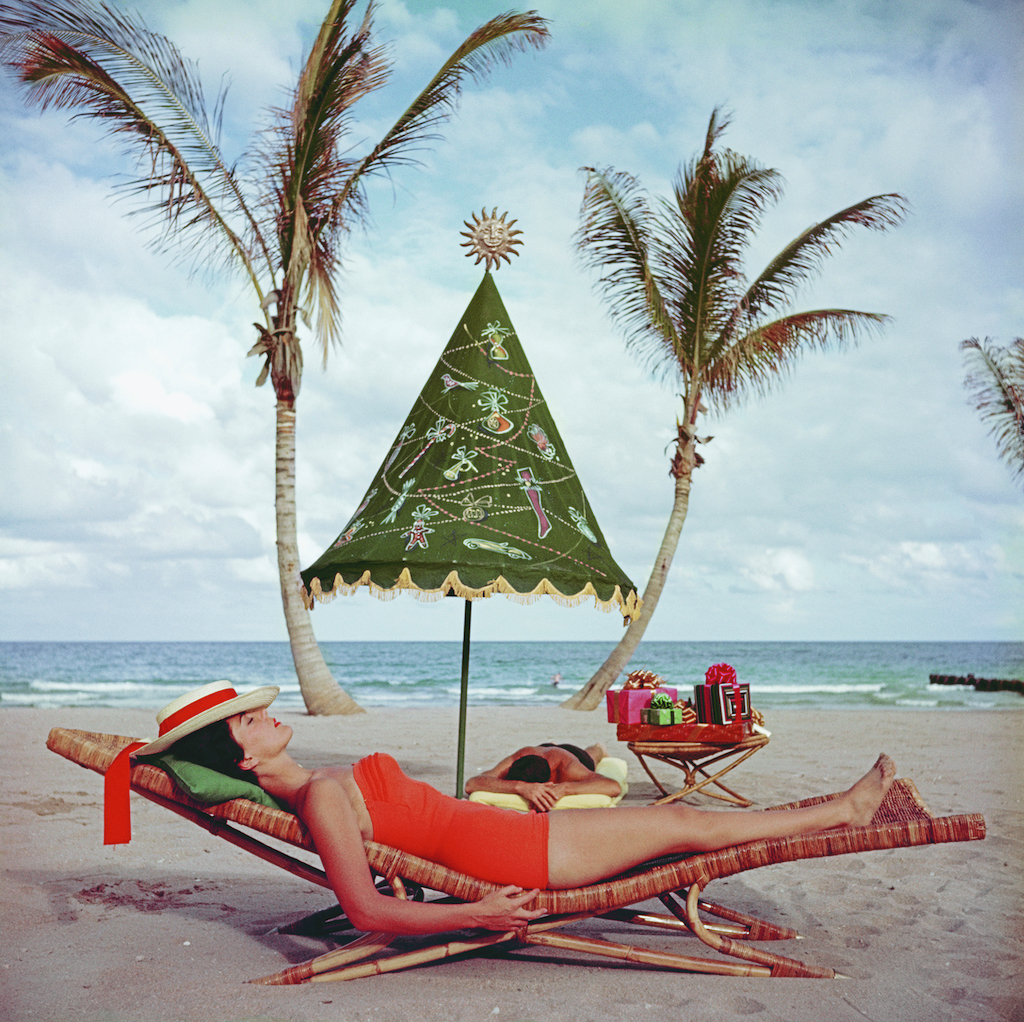 On January 27, 1949, handsome Hollywood leading man Tyrone Power married the stunningly beautiful Mexican actress Linda Christian at the Basilica of Santa Francesca Romana, in Rome. It was a glitzy, entirely sumptuous affair, soon after dubbed by the publicity machine at 20th Century-Fox as “The Wedding of the Century.” During the week leading up to the nuptials, the youngish couple—Power was 34, Christian 25—was feted at upper-crust soirees throughout the ancient city. American heiress Dorothy Taylor, aka the Countess di Frasso, for example, threw a party at the Whip Club that didn’t conclude until 7 o’clock the following morning. The Countess’s guests, one observer noted, were “not only the cream of Roman society, but the cream of the cream.”

On the day of the wedding, thousands of frenzied Roman citizens lined the streets from the Colosseum to Piazza Venezia, while others pressed anxiously against the church’s barricades, hoping for a glimpse of Power and Christian. The narrator of one contemporaneous newsreel noted that seemingly half of the city’s residents turned out that day to help the newlyweds celebrate. “Nothing like it had been seen in the majestic shadow of the Roman Forum since Brutus stabbed Julius Caesar on the Ides of March,” a breathless reporter averred in Life magazine a week later.

An editor at Life had asked one of its Rome-based correspondents, 32-year-old George Aarons, to shoot photos of the wedding. For Aarons, a handsome, eminently charming six-foot-four-inch freelance photojournalist who in a few years would assume the professional nickname Slim and embark on a storied 40-year career documenting the lives of the world’s most glamorous, affluent denizens, covering the wedding would prove to be a seminal event.

“That was the first time that Slim really spent extended time with people who were exceptionally privileged,” says Shawn Waldron, who, as curator of print sales and exhibitions for Getty Images, today oversees the entirety of Aarons’ vast photographic archive. “It was a real spectacle.” 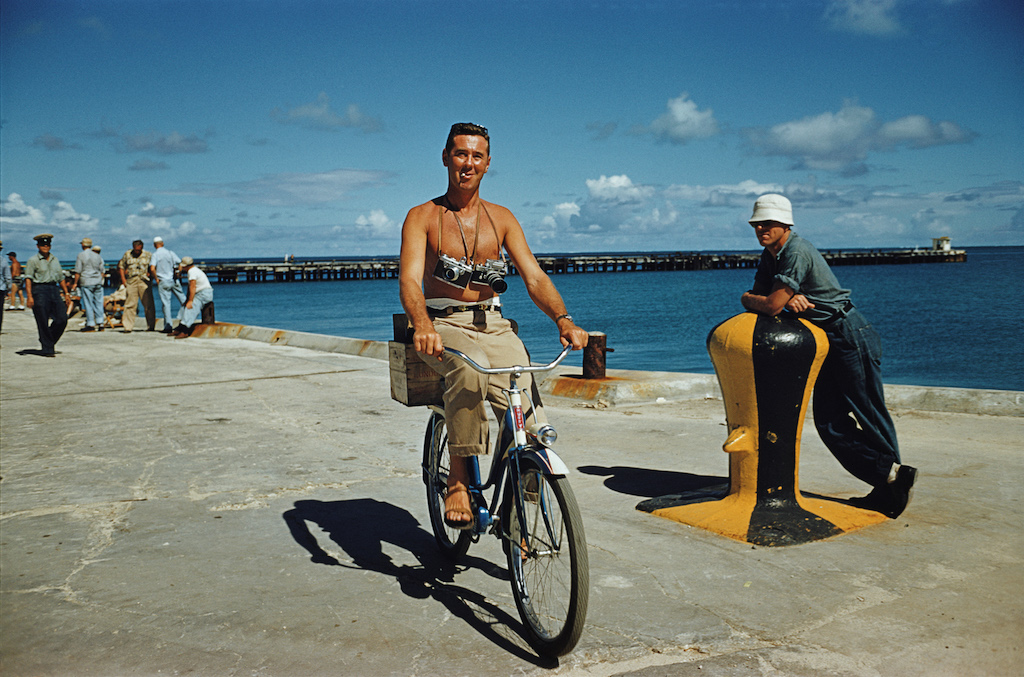 Photographer Slim Aarons riding a Huffy bicycle along the quayside with cameras slung round his neck during the filming of ‘Mister Roberts’ in Hawaii, 1955. (Photo by Slim Aarons/Getty Images)

Aarons had already amassed a wealth of experience as a professional lensman by the time Power and Christian tied the knot (which they unceremoniously untied when they divorced in 1956). Most notably, while serving in the U.S. Army and taking pictures for its weekly publication, YANK, during World War II, he covered horrific battles in North Africa, the Middle East and Europe. He received the Purple Heart after being injured when German soldiers blew up a dock along the Italian beach during the Battle of Anzio in 1944. Not long after the war ended, discharged from the Army and back in the States, he moved to Hollywood, California, where he scrambled for freelance photography jobs, eventually finding steady work with Life. In late 1948, the magazine sent him to Rome, and it was there, a few months later, that he had the opportunity to cover the aforementioned ‘Wedding of the Century’. “To me,” Waldron says, “that feels like the critical moment that really opened his eyes to that whole other world.”

Still, it was not until a few years later, in the early ’50s, when Aarons began to truly find his way into the rarefied living spaces of high society. He had left Rome and settled in New York City, where, as he would do so often throughout his career, he hustled to make a living as a commercial photographer. He shot photos for catalogs, magazines and advertising firms. Assignments for Life dwindled, but new opportunities beckoned. Foremost among them was an invitation to freelance for Holiday, a decidedly upscale travel magazine that featured full-color photo essays and long articles by Truman Capote, Joan Didion, John Steinbeck and other famous scribes. Aarons would develop and fine-tune his approach to photojournalism, and thrive at Holiday and soon as well at Town & Country, another glossy periodical aimed squarely at the privileged class and those who aspired to join its ranks. 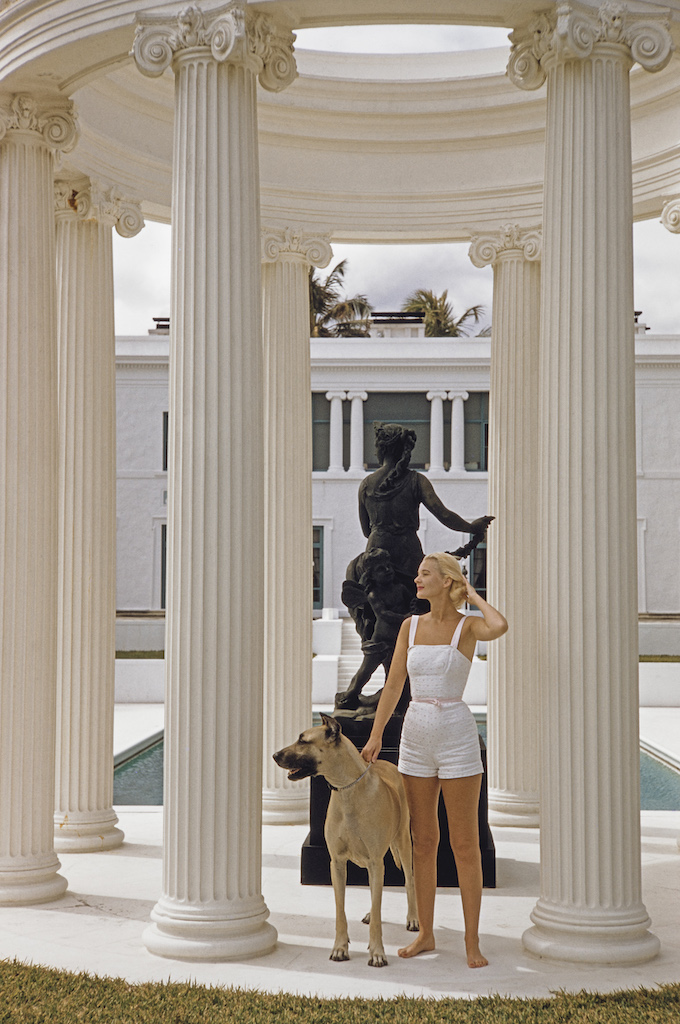 From those heady early days as a keen observer and chronicler of high society until he retired in the early 1990s, Aarons would spend the majority of his professional career freelancing for various magazines, documenting for them, as he once famously said, “attractive people in attractive places doing attractive things.”

In the recently published coffee-table photo book Slim Aarons: Style, Waldron and co-author Kate Betts illustrate in both words and photographs the breadth and depth of the high-flown world that Aarons so doggedly covered. Within Style’s 240 pages—and in five previously released coffee-table books featuring Aarons’ work, all of them, like Style, published by Abrams—we see in colorful, exacting detail a dizzying array of counts and countesses, dukes and duchesses, famous actors, prominent fashion designers, leggy models, wide-eyed debutantes, well-seasoned socialites, Ivy League coeds, sexy trendsetters and entire families born into lives of spectacular wealth, the whole lot of them seemingly at perfect ease with their outsized allotment of privilege, leisure and money. We see these charmed people at their untroubled best, elegantly attired, passing their days and evenings in the world’s finest homes and resorts, surrounded by old books, expensive rugs and marble statuary. We see them lounging, scantily clad and gloriously tanned, on the white sand of gorgeous beaches and the rich, wooden decks of luxurious yachts. We see them in chic winterwear on the snow-swept slopes of Vermont, Aspen and Switzerland. We see them astride fine horses and motorbikes, leaning against the hoods and doors of pricey sports cars, posing contentedly with their poodles and Great Danes. We see them in pools and parlors playing canasta and backgammon. We see them gayly intermingling at charity balls, polo clubs and sprawling family picnics. 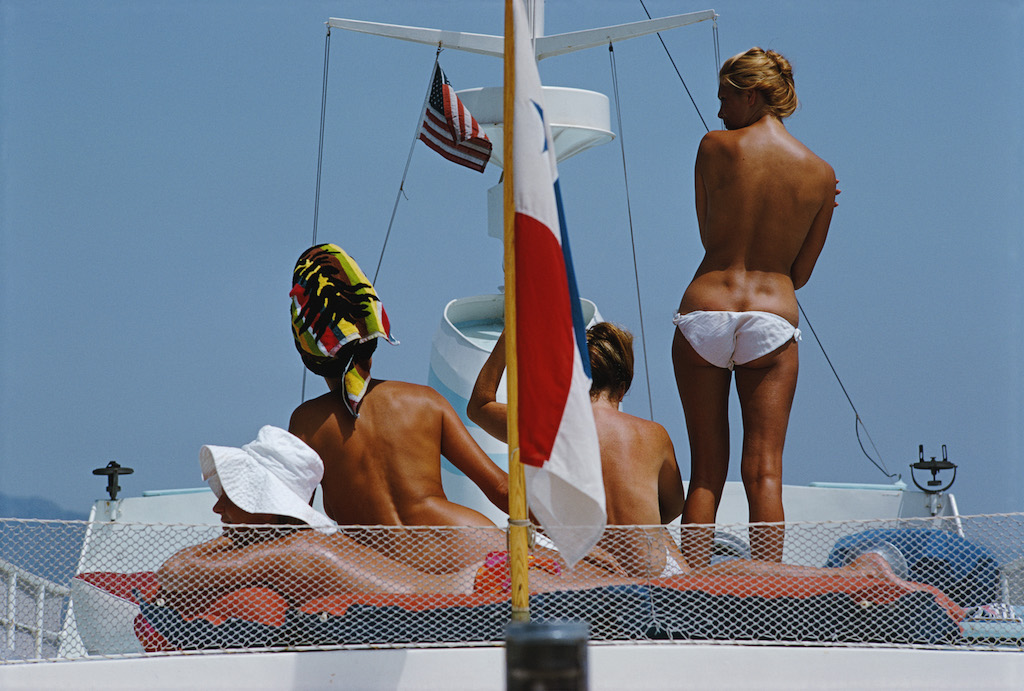 His subjects, Aarons once said, were “sophisticates who roam the world hunting the sun.” For four decades, Aarons documented that journey, season after season, year after year, even as style and fashion ceaselessly evolved, high-society culture went out of vogue, and social and political upheavals rocked the world. No matter the circumstances, he kept to his beat, always a welcome and trusted presence among the rich and entitled, photographing them in their natural settings, never employing a stylist or makeup artist, insisting only that no one within the frame of his viewfinder be wearing jeans, T-shirts or sneakers.

“Everybody that he photographed—everybody—liked him,” famed socialite and favored Aarons’ muse C.V. Guest told Vanity Fair writer Evgenia Peretz in 2003. “You couldn’t help but like him.” 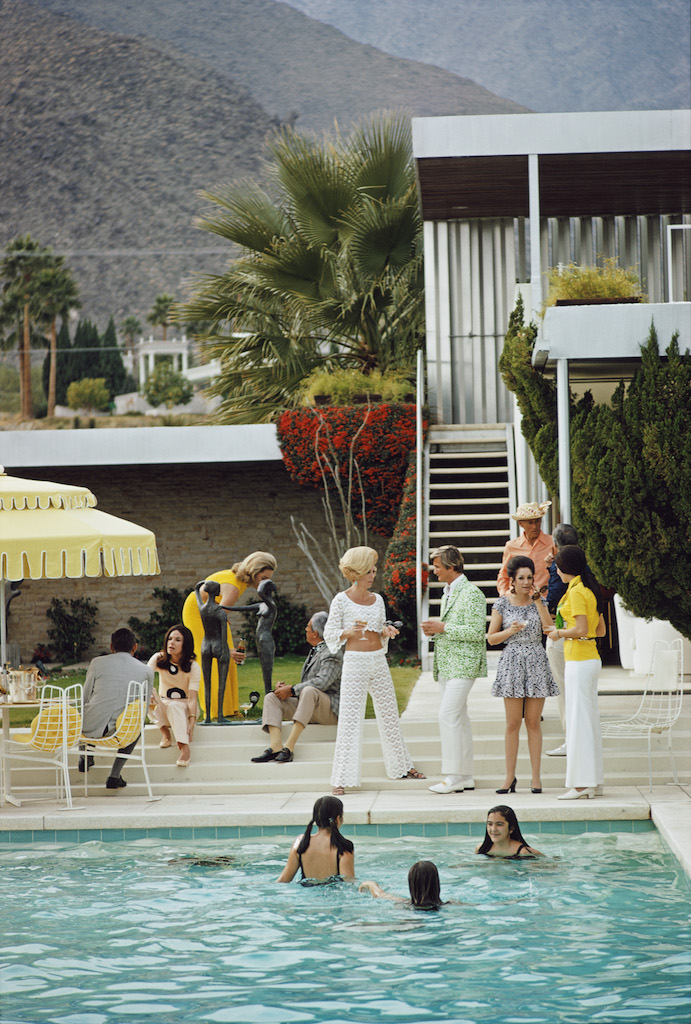 Curiously, until Aarons, then in his early 70s, sold his entire photographic archive to Getty Images co-founder Mark Getty for a large sum of money in 1997, he was never himself free of financial worry. But then, it seems, Aarons never aspired to great wealth or to emulate the lifestyles of his many well-to-do subjects.

“His brushing shoulders with the rich and famous did not affect how he lived his life or his tastes,” Aarons’ former assistant Laura Hawk told The Guardian in 2016. “He had absolutely no desire to hang out with his subjects at the end of the day, and he did not expect an invitation to the yacht or exclusive club.”

Indeed, between assignments, and then after he retired, Aarons retreated to his 200-year-old farmhouse and six acres of land in Bedford, New York, where he lived simply and happily with his wife, Rita, and their daughter, Mary. “His big activity was keeping his property beautiful,” says Mary, who, now in her early 60s, works as a publishing executive. “He had a riding mower, and he loved to mow his lawn. And he planted hundreds and hundreds of daffodil bulbs on both sides of the street so that people could see them when they drove up.”

In 2006, at age 89, beset by heart troubles, Slim died in a veterans’ home near his farmhouse shortly after suffering a stroke. Rita, who worked as a travel agent for many years while her husband traveled the world, survives.

Today, Aarons and his work are renowned among artists, designers and most anyone with an eye for the finer things in life. “His name over the last few years has become shorthand for a certain lifestyle,” says Waldron, who has begun working on yet another Aarons coffee-table book, one that will dive deeply into the photographer’s important and largely overlooked early work for YANK and Life magazines. “You see all the time on design blogs or in magazines, they say, ‘Have your Slim Aarons moment’ or ‘Live out your Slim Aarons fantasy.’ His name has become like an adjective denoting glamour, leisure and privilege. It’s bizarre.”

“What attracted me to his work was his optimism” says potter and designer Jonathan Adler, an avid Aarons admirer who’s been selling premium-quality prints of the photographer’s work at his 10 Jonathan Adler retail stores and on the company’s website since 2012. “In Slim Aarons’ work, people are never depressed. Instead, they’re frozen in moments of heavenly, unapologetic self-indulgence. The worries of everyday life melt away, and you’re left with a cloud of Palm Beach, Capri, Southampton, Acapulco and Gstaad. Life is so … attractive.” 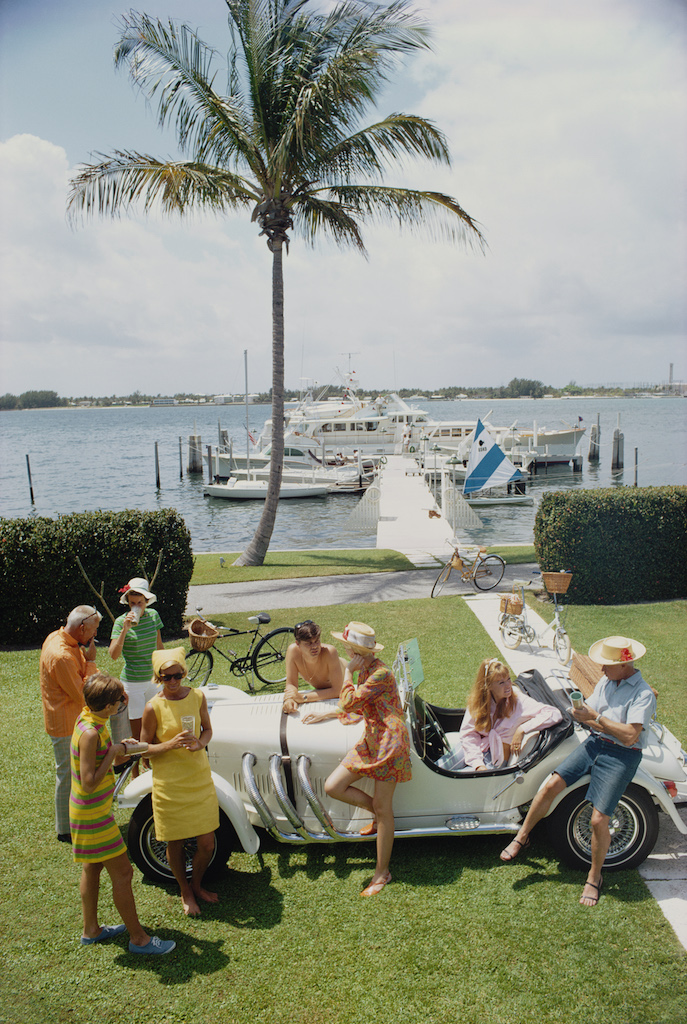 One of Slim Aarons’ favorite locales was Palm Beach, a town he once described as “the gathering place for families of fashion and fortune,” where “the party is the principal indoor and outdoor sport.” There, in the mid-1950s, he snapped photos of prim debutante C.Z. Guest and coolly stylish Patsy Pulitzer Bartlett for a Holiday magazine story titled “The Palm Beach Look.” In 1964, with great swaths of American youth fully embracing rock music and the burgeoning civil rights movement, Aarons photographed socialite Mrs. A. Atwater Kent, barefooted and breezily donning a scarf and Lilly Pulitzer shift, crossing Worth Avenue in Palm Beach.

“It was like the younger generation was bringing a new casualness—the fact that they were barefoot all the time and wearing their Lilly Pulitzer shifts with no underwear,” Shawn Waldron says. “That was kind of scandalous to the old, staid Palm Beach crowd.”

As Waldron notes, Aarons returned to Palm Beach “again and again” throughout his career. And, he adds, “I think he’d be interested in the crowd that’s in Palm Beach today. In some ways, they seem like his type of socialite.” —DP 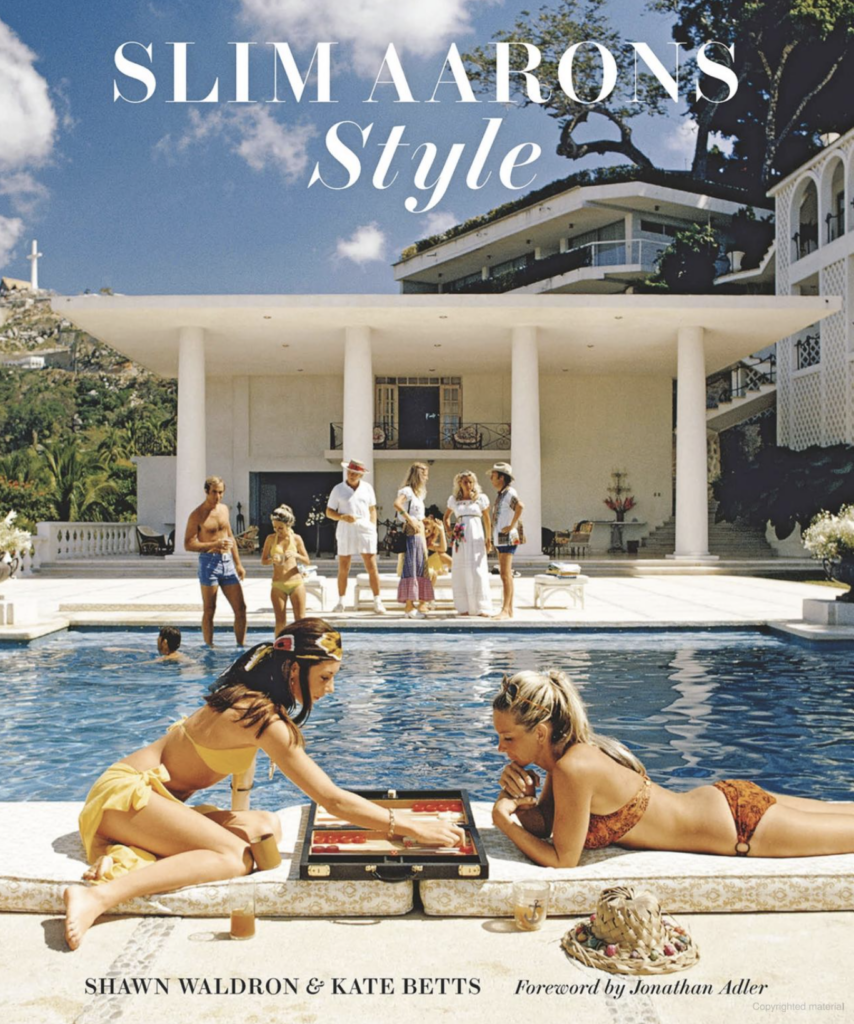