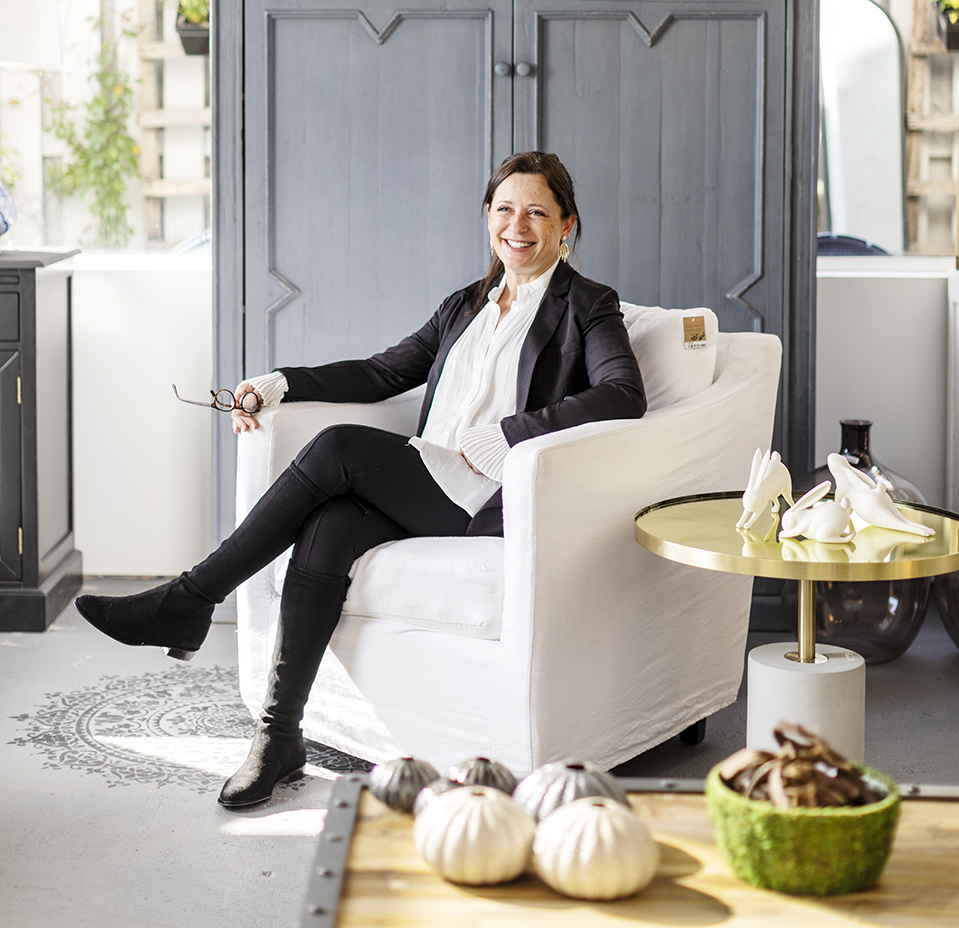 Every winter, Fort Lauderdale-based interior designer Caroline Giraud returns home to southwestern France. “Everything is so beautifully curated here—the people, the homes, the markets—it’s where I get my inspiration,” she says.

It’s early February, and Giraud is fresh off attending Maison&Objet Paris, the equivalent of fashion week for the design world, where she admired some of the work out of Scandinavia. Now the 54-year-old is back at her house near Bergerac, a medieval town of half-timbered homes sitting along the northern bank of the Dordogne river. “We’re redoing the house, so there’s a lot of dust right now,” she says with a laugh, adding that they need to wrap up before she hosts her daughter’s wedding this June.

The powerhouse designer doesn’t seem to pause between projects—personal or professional. Last June, she relocated her boutique, La Vie en Blanc, from North Federal Highway to an expansive, 5,000-square-foot space downtown, complete with high ceilings and soaring windows. “The old shop was like a big box,” she says. “Moving downtown made sense, and the new building has so many beautiful architectural features.”

To Giraud, the look and feel of the space is just as important as what she’s selling, since the shop doubles as a showroom for her interior design work. “Clients who hire me are usually people who have come into the store and love the aesthetic,” she says, describing her style as a mix of masculine and feminine, a blend of delicate accessories and bold furniture. “I’m consistent with what I do in terms of decor and what I sell; everything I have at my store I know I can put in my clients’ homes.” 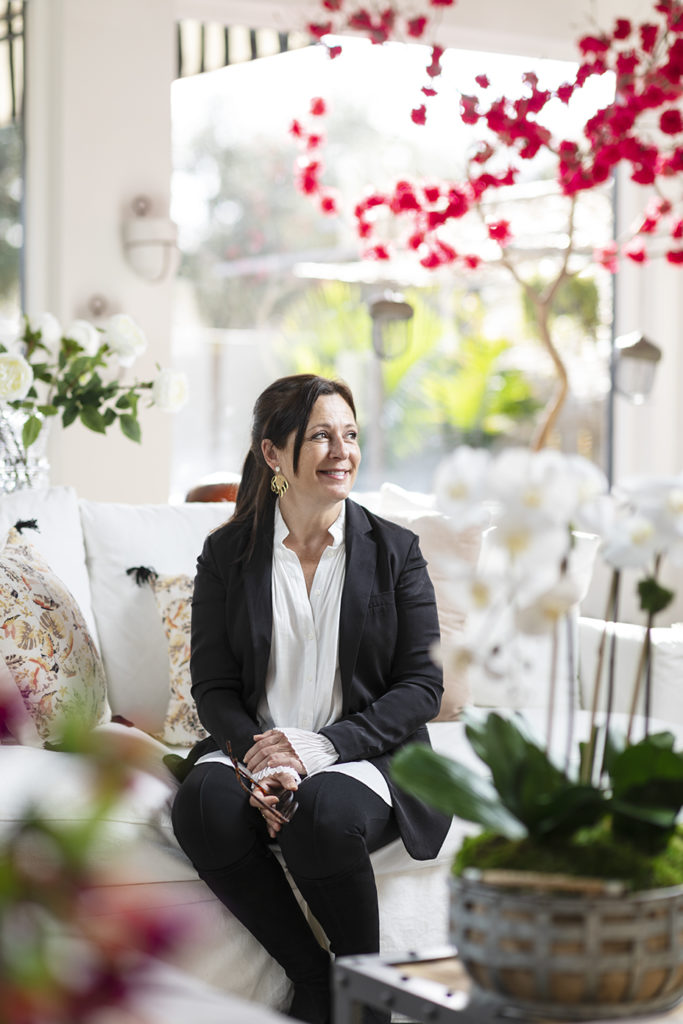 Giraud first moved to Miami 27 years ago and broke into the design world as a project manager at Delano South Beach during French designer Philippe Starck’s renovation. But it wasn’t until she met fashion designer Barbara Hulanicki, who designed the interiors of Chris Blackwell’s GoldenEye in Jamaica, that she considered a career in interior decorating. One of her first clients was the prince of Monaco, who she had worked with in her early 20s in Cannes, France, when she owned an events company.

Giraud was having trouble sourcing decor for her projects in South Florida, and that’s when she decided that instead of searching for shops, she would create her own. This was how the concept for La Vie en Blanc was born. “At the time, Fort Lauderdale didn’t have that many shops specializing in home decor,” she says. “It’s a city that’s booming, so it was a nice opportunity to be there at the beginning.”

In more recent years, she’s worked on projects for high-profile sports stars like baseball player Raúl Javier Ibañez, in addition to spearheading the redesign of the 250-room, art deco Nautilus hotel on Miami Beach. “I learned a lot working on Nautilus, but after the first room, it gets repetitive,” she says. “I’d rather do a little boutique hotel than a big machine again.”

At La Vie en Blanc, about 85% of the items are imported from Europe—France, in particular—including bed linens, dishware, candles and art. It’s also where you’ll score a rare find in Florida: pieces from the French jewelry brand Zag. “We work with companies that don’t sell on the big Amazons of the world,” Giraud says.

Furniture is purchased domestically, but Giraud is thinking of shipping over a container of antique and vintage pieces. She also works with a private label in Paris to design a “chic-comfy” clothing collection of billowy linen dresses and St. Barts-appropriate cotton peasant tops. “It’s always a hard question when people ask me what style the shop is,” she says. “I think it’s a mix of the old world and new world. I always start classic when I design a room and then add that ‘wow factor’ here and there.” 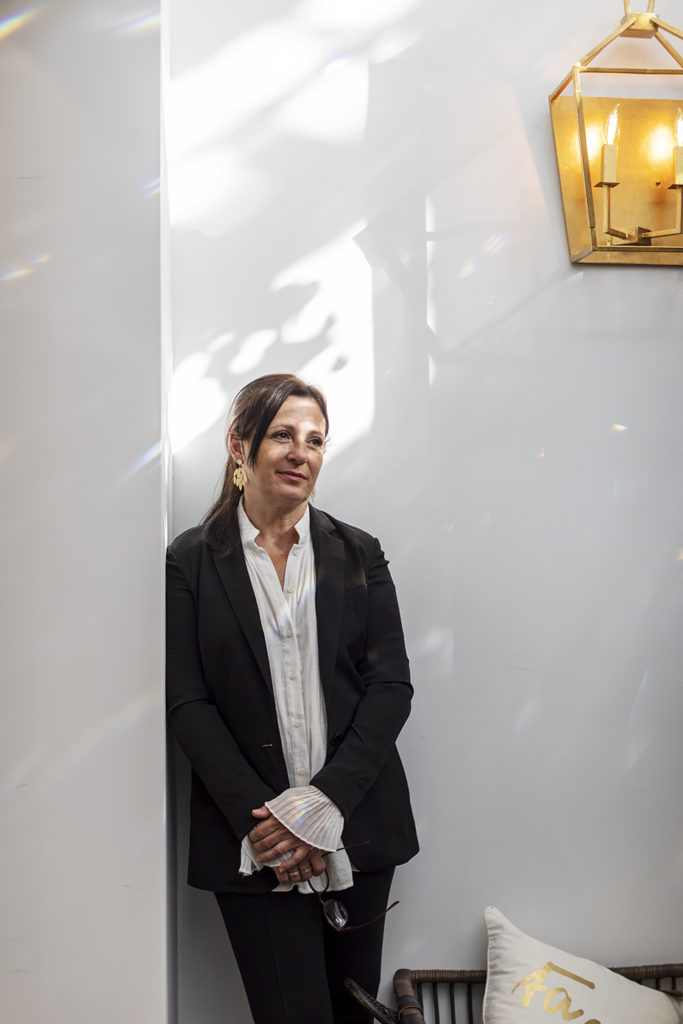 At the new boutique, Giraud brought in another element of French culture the city was missing—a salon de thé. A few months ago, she built the Parisian-inspired La Vie Tea Salon by Lenore, a partnership with longtime client and friend Lenore Nolan Ryan, owner of the popular local cooking school. Fresh flowers fill small antique vases sourced from markets around southwestern France and tables are set with vintage cups and silver cutlery.

“It’s a lifestyle store, and when people walk in, they say they feel transported,” Giraud says, adding that she’s curated everything from the music to the scent to bring a sense of Paris to downtown Fort Lauderdale. “A few older women come in every week, and they tell me, ‘When I feel a bit down, I go to La Vie.’”