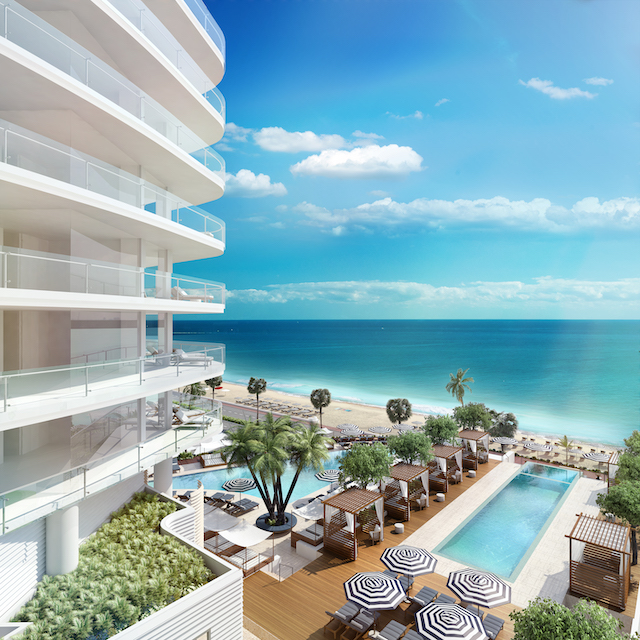 By John Thomason   Photography by Jason Nuttle and Eduardo Schneider

Priced at a cool $16 million, Penthouse 2022 is being billed as the crown jewel of the new Four Seasons Fort Lauderdale, the literal apex of the city’s first five-star hotel and residence. At 6,168 square feet—along with an additional 5,500 square-foot terrace—the penthouse includes a private rooftop pool and direct elevator entry. For the more, ahem, modestly wealthy, prices for two- to four-bedroom residences begin at $4.55 million, and are more than 85 percent sold as of February 2022. For vacationers and staycationers interested in enjoying Four Seasons hospitality, the luxe hotel suites are a splurge like no other. 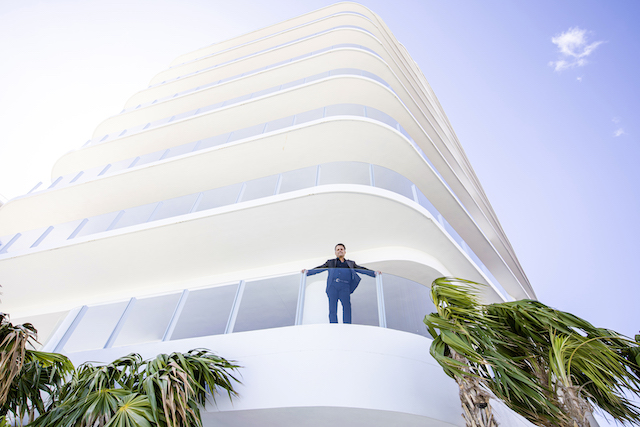 “There has been no real luxury in Fort Lauderdale,” says Louise Sunshine, a celebrated development consultant who has served as the project’s advisor from predevelopment to completion. “So, this hotel, and these residences, will set the standard. They’re already priced twice as high as the next thing, and we only have eight residences left, which is quite remarkable since the closings haven’t started.”

The curvy, rippling building, which joins a cluster of posh hotels along Fort Lauderdale Beach—the W, the Conrad and the Ritz-Carlton are all nearby—is distinguished by the singular creativity of its designers. The forward-thinking development firm, Fort Partners, assembled architect Kobi Karp, landscape architect Fernando Wong and interior designer Tara Bernerd, all first-class professionals with eclectic backgrounds and international portfolios. 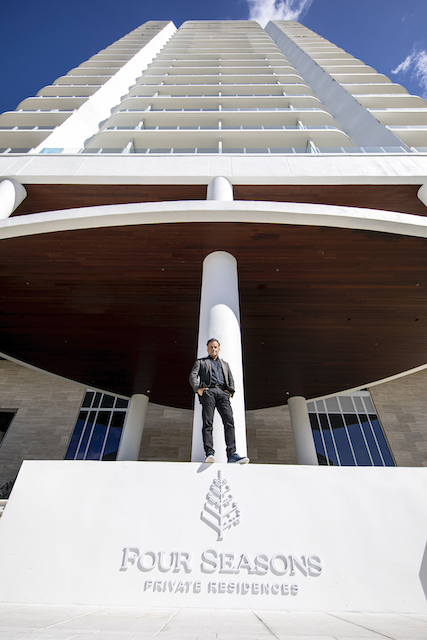 Karp, an Israeli native who alighted in Miami in 1988—“in the Miami Vice and Scarface days,” he says—created the layered, astounding illusion of a “floating” edifice rising above a porte-cochère, itself perched atop a lush garden walkway. He also managed, at great expense, to place the building’s parking garage completely underground. Karp credits Fort Lauderdale’s historic Yankee Clipper (now B Ocean Resort), with its “streamlined, modern, nautical shapes,” as an inspiration.

“It’s a porous design; more of a welcoming design,” he continues. “This kind of thought process allowed us to float the public spaces–the hotel, the ballroom– and then create a more solar-receptive triangle of a building that maximizes the light and the air.  As the sun rises in the east and sets in the west along a southern access, the public spaces, the ground level, the streets and the public amenity areas on top, are all tropical-weather, indoor-outdoor spaces that are all unique.”

Panamanian-born landscape designer Fernando Wong, whose previous credits include the entire grounds of the University of Miami, agrees with Karp that the natural environment is their uncredited collaborator. “You cannot compete with the beautiful color of the sky and the horizon and the ocean and the whitecaps,” he says. “To me, [the goal is] to submerge people into nature and everything that surrounds us.” 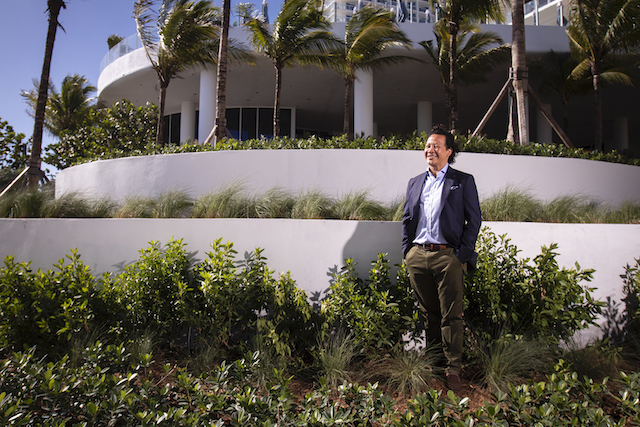 Wong’s chief contribution is the property’s serpentine-covered garden, which is perfect for a mindful stroll in an unlikely urban setting. The “Swiss Cheese” plants and lily turfs pop with lush, dark hues suggestive of a tropical getaway. “Sometimes I think the architecture feels like a big mountain coming out of the ocean, almost like St. Lucia,” he says. “That’s the way I dream about it. And a canopy of coconut palms at ground level will set the tone for how to buffer the road and how to engage the foliage with the horizon of the water.” 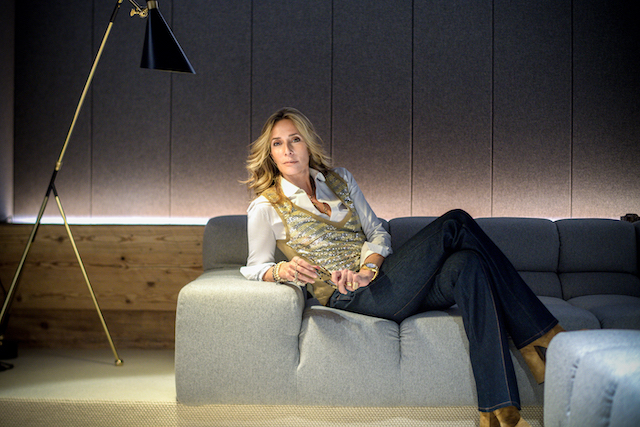 London-based interior designer Tara Bernerd also sought to engage with the innate sensibilities of Fort Lauderdale Beach. At the project’s outset, she stayed in a nearby hotel to immerse herself in the region’s vibe. “And I got to this place with this beautiful crossing onto those white sandy beaches, and it reminded me, in my own romantic style, of the French Riviera.  It all links to boats and travel and the Bahamas. So we wanted to do something that had, in a sense, an effortless elegance, so it didn’t feel overly pushy—overly designed—but still had an element or homage to that Riviera past.”

Bernerd’s firm has a history in yacht design, and she sought to channel a similar flavor in the Four Seasons’ evocative, understated interiors, which include travertine porcelain flooring, plenty of marble and brass, vintage black-and-white beach photography and woven, maritime finishes. “All of it is done in that amazing varnished wood that you might see on the old Riva yachts or Chris-Craft boats. It’s all about trying to create something effortlessly chic, by the water, that embraces boating.” 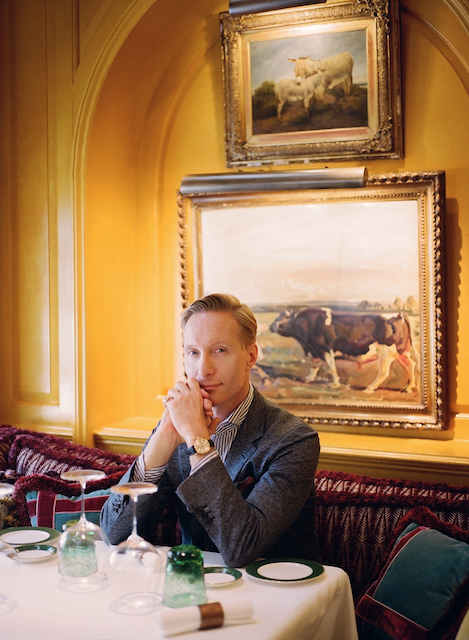 Food and beverage director Martin Brudnizki rounds out the property’s brain trust. His work includes the design for Evelyn’s, the on-site restaurant, which serves Floridian-Mediterranean cuisine. (The restaurant’s name is a nod to a local landmark: Evelyn Bartlett is the second wife of artist Frederic Clay Bartlett, creator of the city’s historic Bonnet House.)

“Fort Lauderdale has an iconic sailing history and has long been established as a destination for pleasure pursuits and beautiful weather,” Brudnizki says. “Our design reflects this, showcasing an abstraction of traditional nautical architecture and combining these motifs with simple and elegant lines to create a modern and weightless interpretation of the yacht club.”
Despite its many attractive amenities (two pools, spa, state-of-the-art fitness center), the reason the Four Seasons can charge well into the seven digits for its 83 residential suites goes back to that ageless real-estate mantra—location, location, location—and the designers savvy enough to realize its full potential. A two-bedroom, two-and-a-half-bathroom suite is framed by no less than 12 floor-to-ceiling windows looking out onto the spacious balcony, each with a breathtaking, cinematic vista of Fort Lauderdale Beach. 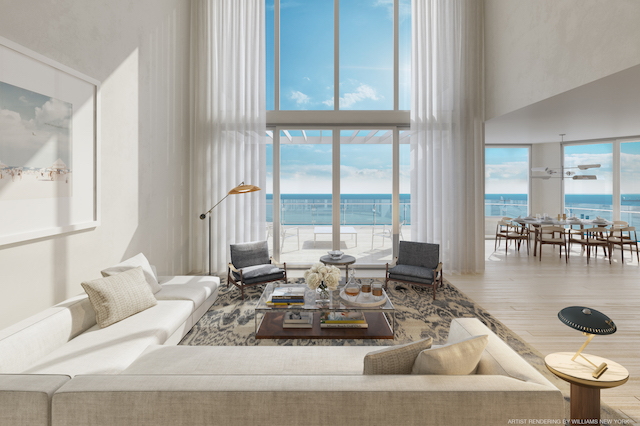 “Every residence, every hotel room, every public space captures the views,” says Louise Sunshine. “It was views first. When you’re fortunate enough to have outstanding views, you need to capture them every place.”

Residents and hotel guests aren’t just buying a stay in one of the world’s foremost luxury brands. They’re buying a little piece of Fort Lauderdale itself.