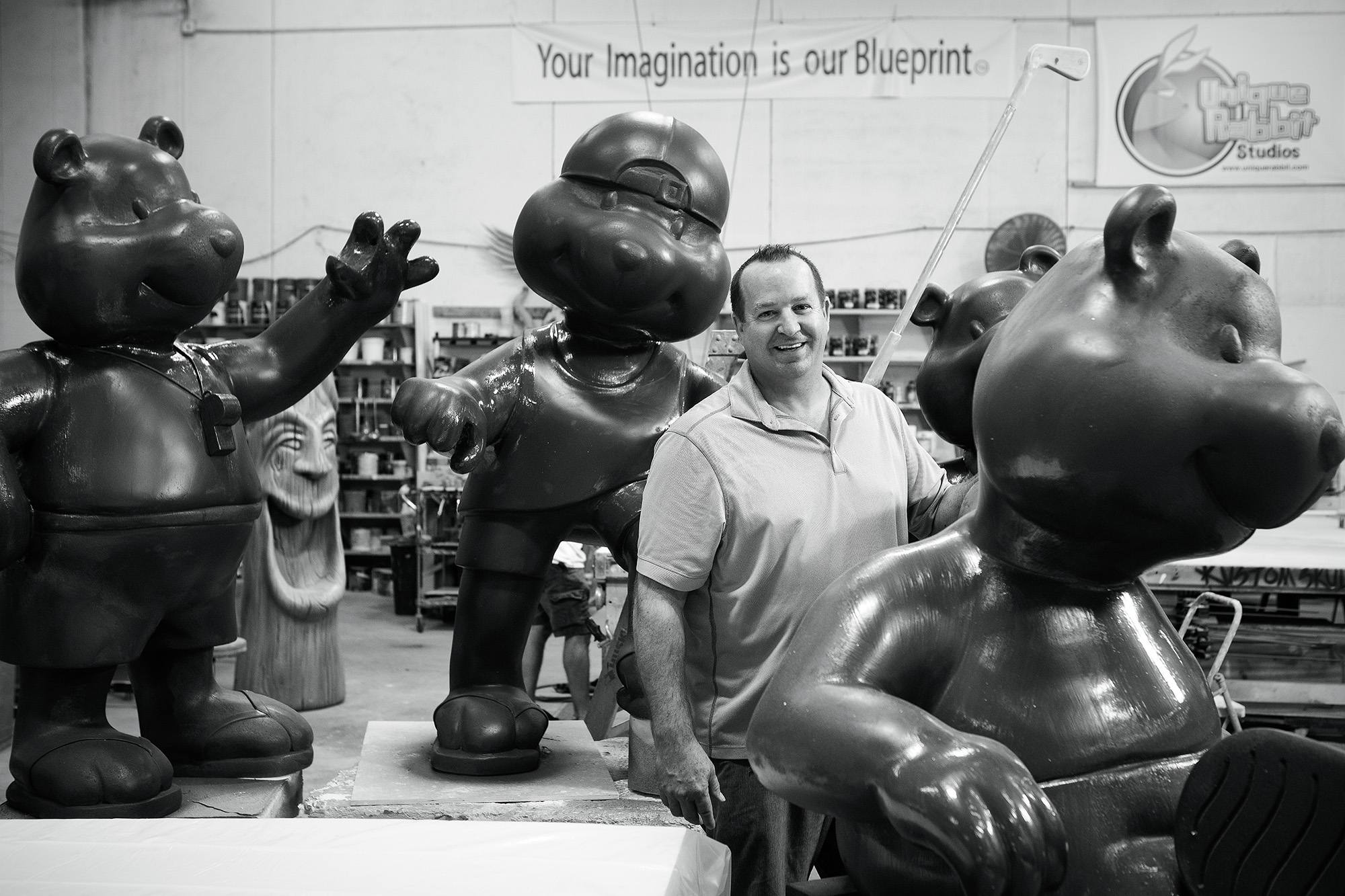 Wander into one particular 20,000-square-foot warehouse in Pompano Beach, and you’d be forgiven for thinking you stumbled into a half-finished Willy Wonkaesque funhouse. Without the helpful dotted line on the floor guiding you into the main office, you might find yourself standing face-to-abdomen with a 9-foot-tall statue of a Miami Dolphins football player, bumping into an all-too-realistic Slimer from “Ghostbusters” or gazing upward only to see a cartoonish duck—lounging on its back in a pool of water on the ceiling—grinning down at you.

It’s part Dalí fever dream, part Saturday morning children’s show. It’s disorienting and delightful. It’s also a small window into the idiosyncratic mind of John Belcher, owner of Unique Rabbit Studios. Get to know Belcher and it quickly becomes apparent that his company represents two big aspects of his personality: an entrepreneurial spirit and an impish sense of creativity.

Unique Rabbit Studios was born out of Belcher’s previous company, Foam Supply, which specialized in foam crown molding: a process that creates design elements for homes or businesses out of Styrofoam. After a few years, Belcher noticed that people began to ask for things that weren’t simply decorative flourishes—like when a man requested a giant middle-finger sculpture for his front yard (“I refused the job,” Belcher says).

Those off-the-wall requests didn’t stop, though. While he initially worked on these projects under the Foam Supply name for the first four  years, Belcher saw a new business opportunity where  others might have seen a distraction and launched Unique Rabbit Studios in 2008.

“I’m a prankster, a jokester,” says Belcher, 49, recalling a cross-country road trip he took with his wife and four children when they visited all 50 states in a year. Belcher says those family expeditions were like most American road trips—except that two foam sculptures hung from the roof of the minivan being towed behind the RV, while another two dangled from the RV’s ladder.

That playful imagination is essential to what  Belcher and his team at Unique Rabbit Studios do.  Generally, when clients request a job, they’ll only  provide a basic idea, and Belcher isn’t even sure what  that might evolve into during the six- to eight-week process of bringing a sculpture to life.

“When I agree to a piece, I have absolutely no idea how we’ll build it,” he says. “My absolute favorite part is figuring it out in that first stage.”

In the initial stage of a project, he and his eight-person team brainstorm ideas and go back and forth with the client. Often, the final product ends up looking much different than the original request.

For example, Riptide Music Festival reached out to have a sculpture of its logo designed: a guitar pick with a pattern of concentric circles. By the time the piece was finished and delivered, it had morphed into a massive octopus clutching a guitar pick with its tentacles peeking out from the sand. The festival team loved it.

The exceptional work of Belcher’s team has landed Unique Rabbit Studios clients like the Miami Dolphins, the University of Miami, Universal Studios and the Museum of Ice Cream, with pieces found in the United States, Canada and the Bahamas.

In addition to commercial work, Unique Rabbit Studios lends its talents to philanthropic initiatives. The company recently partnered with the PTA at Ruth K. Broad Bay Harbor K-8 Center to produce a tribute sculpture for Marjory Stoneman Douglas High School of the school’s mascot, an eagle, holding a heart with the words #neveragain on it. Belcher and his team are also working with Miami artist Lebo to design owls, which Lebo will then paint and donate to a wildlife sanctuary in Ocala.

As for that next idea, it’s in Belcher’s head somewhere already. Regardless of how strangely delightful it ends up being, you can be sure it’s a work that would only come from Unique Rabbit Studios.

This article originally appeared in the Summer 2018 Issue.
0 comment
0
FacebookTwitterPinterestEmail

Fish Out Of Water