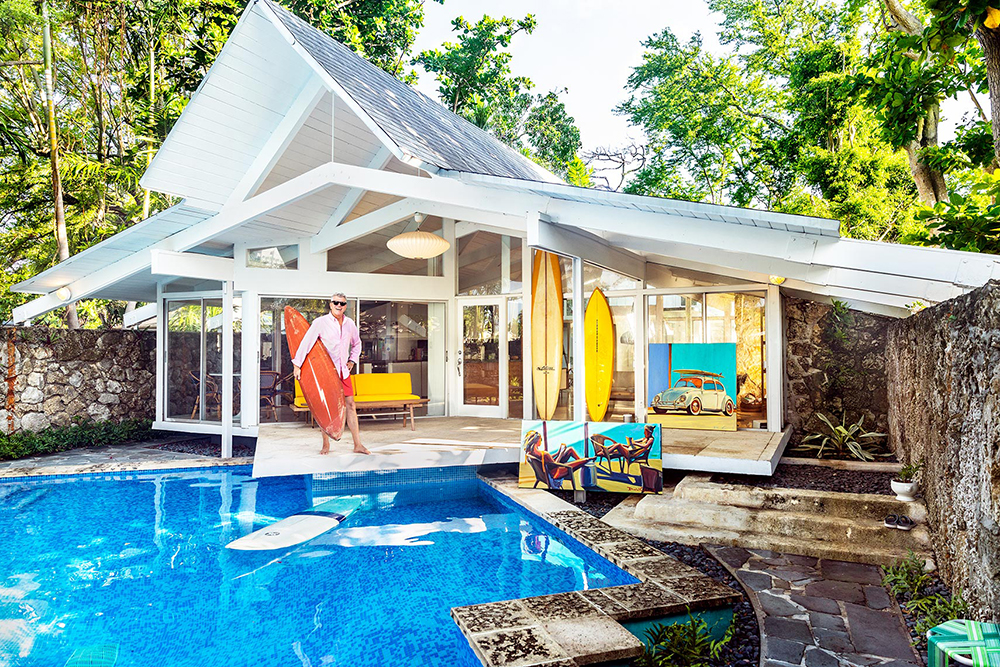 Everyday moments become mesmerizing works of art in Daniel Caldwell’s paintings. He sees beauty in the commonplace: a group of men working on a fishing dock, a sunbather idling on the sand, carefree children handline fishing in Harbour Island. These are just a few of the fleeting snapshots preserved in time by Caldwell’s free-spirited approach, his broad strokes, vivid colors and interpretation of sundrenched scenes allowing viewers to interpret coastal life anew. Caldwell’s eye for fine detail is rivaled only by his sharp memory, as he can recount every step of the path that led him to where he is today. True to his passion for surfing—which plays a significant role in his personal history and his artwork—he substitutes the word “stoked” for “excited” and lets the changing tides take him where they will.

After living in Paris, Caldwell returned to Florida where he picked up surfing and discovered a keen interest in its culture.

His family roots are steeped in American history. His great-grandparents resided along the Suwannee River, and his mother, Genevieve, known as “Gigi,” was a gifted artist and member of the Daughters of the American Revolution. His father, Joe, was an athlete who played quarterback for Miami Senior High School and then for the U.S. Military Academy, leading Army to its last undefeated season in 1958. Gigi and Joe were Miami Senior High School sweethearts, and their son, Daniel, was born on the Fourth of July in 1962 on a military base in Fayetteville, North Carolina. But when Daniel was 2 years old, tragedy struck: His father was killed in a car accident by a drunk driver. “Our world came to a grinding halt,” Caldwell says. 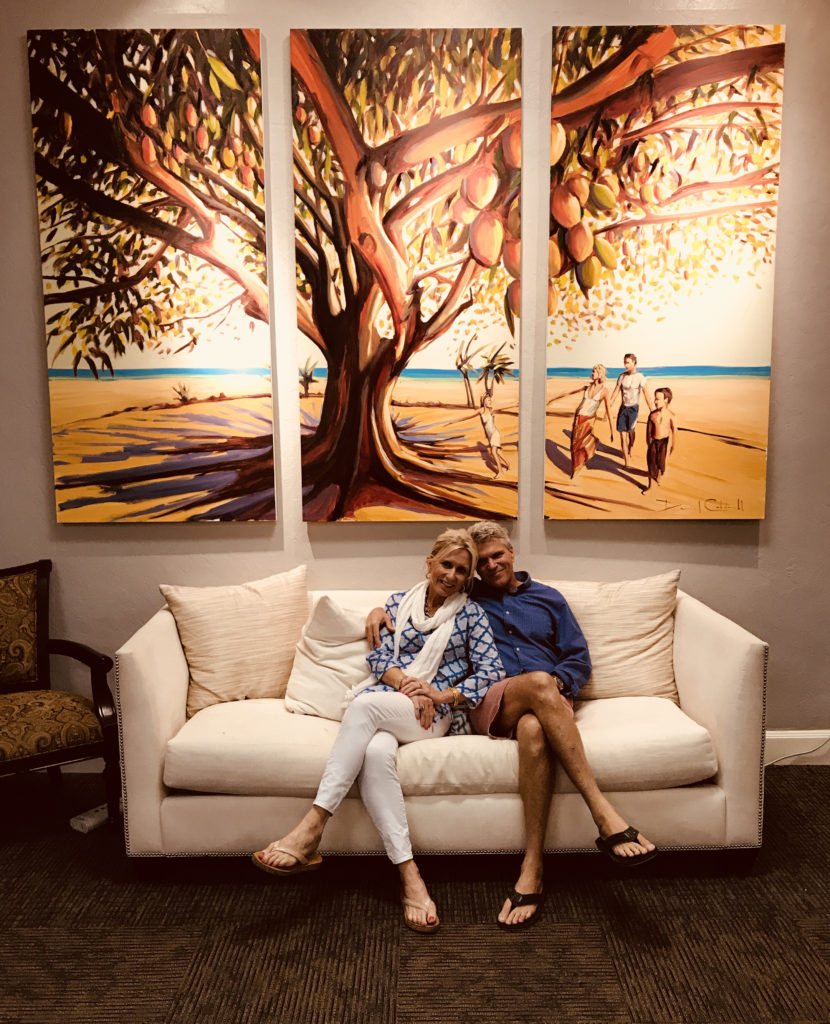 Hanging above Caldwell and his wife, Liz, is his painting “Faith of a Mustard Seed.”

A devastated Gigi, just 27 years old, accepted an invitation from a West Point colonel to “come to Paris and sort things out.” Gigi entered design school in France as a young Caldwell toddled about in his military helmet, taking in everything from the rococo style to his mother’s artsy friends. “I remember the texture of Paris,” Caldwell says. “You cannot discard the beauty you see there.”

The Paris years were followed by a return to Miami, where they lived in Little Havana surrounded by Cuban families and yards full of chickens. As Gigi developed a successful interior design career, Caldwell grew into a wild child and angsty teenager who became, as he puts it, “a single mom’s worst nightmare.” On a pivotal day when returning from his grandmother’s burial, they stopped in Daytona Beach and he rented a surfboard. “By the end of the day, I was standing up, burnt to a crisp, and that was it,” he says. “I was a surfer.” Unbeknownst to him, he’d partially found the cure for his rebellious streak. 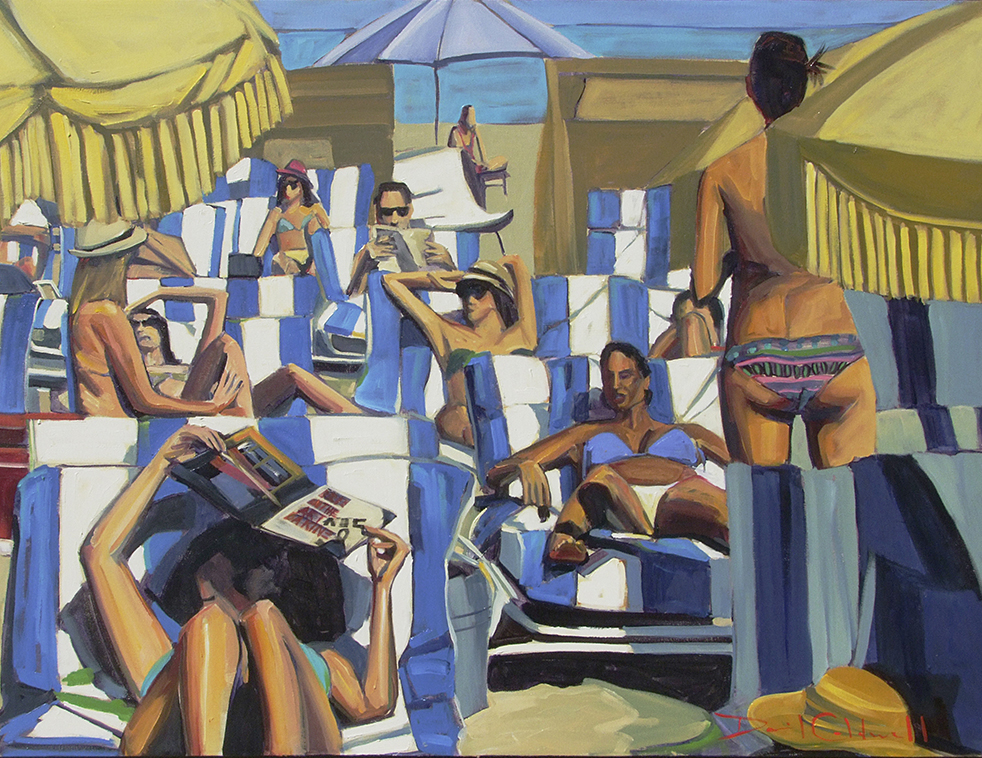 “The Shore Club” by Daniel Caldwell.

The surfing subculture was gaining traction in the ’70s, and Caldwell yearned to learn all he could about its origin. “I would go to the library archives and sift through Surfer Magazine, and my romantic interest in the surf culture took hold,” he says. When he read about Cape Hatteras, he simply knew he had to go. Gigi wasn’t necessarily “stoked” but was supportive. Off he went, praying that God would help him find his way.

Odd jobs and an inherent interest in meeting new people led him to befriend a group of artist surfer buddies who “adopted” him and became important characters from whom Caldwell learned the art of documenting this colorful era. While in Hatteras, he discovered the work of American master Winslow Homer, best known for his paintings of maritime subjects. It was another changing of the tides that would direct Caldwell’s career. 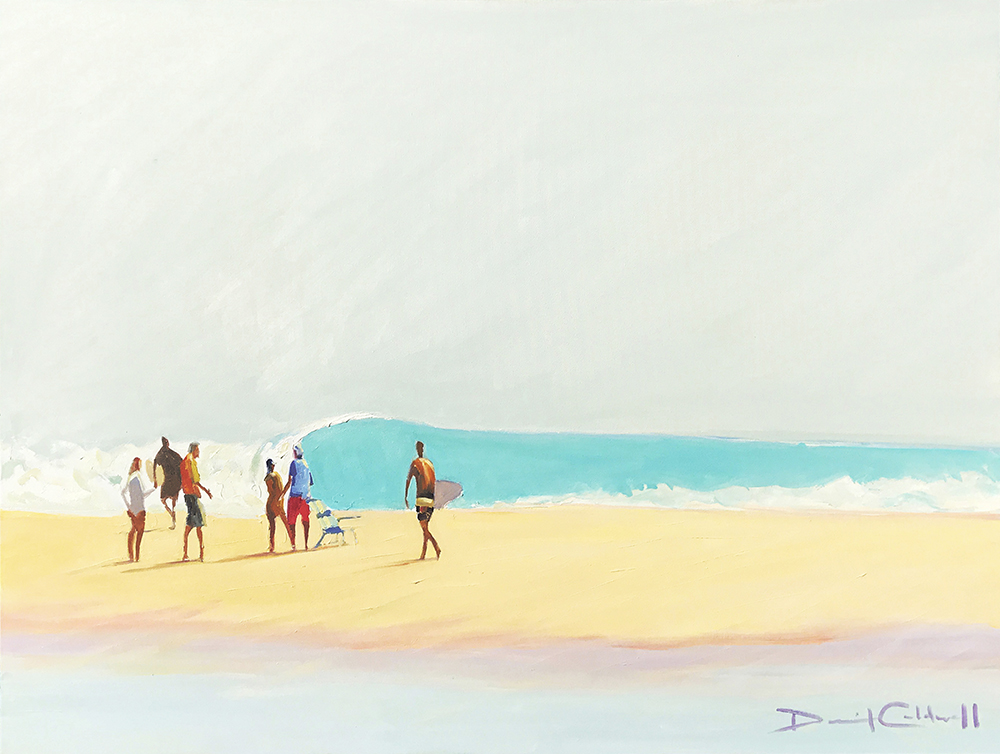 Always seeking optimal surfing conditions, Caldwell studied art direction and advertising at the University of Hawaii at Manoa. While his years there were an adventure, he saw more career opportunity on the mainland and returned to Opa-locka to work as an art director and vice president of sales in his uncle’s T-shirt business. In the years that followed, he gradually, and bravely, became a working artist.

Now 56 years old, Caldwell spends his days with his wife, Liz, and three grown children, and the Fort Lauderdale resident loves visiting his second home in the Bahamas. A self-described “American painter documenting the present scene,” he’s focusing on surf art, a visually rich subject he naturally embraces. This summer, he’ll take up residency in New England, where he says he plans to “bring his tropical sensibilities northward and see what comes of it.” 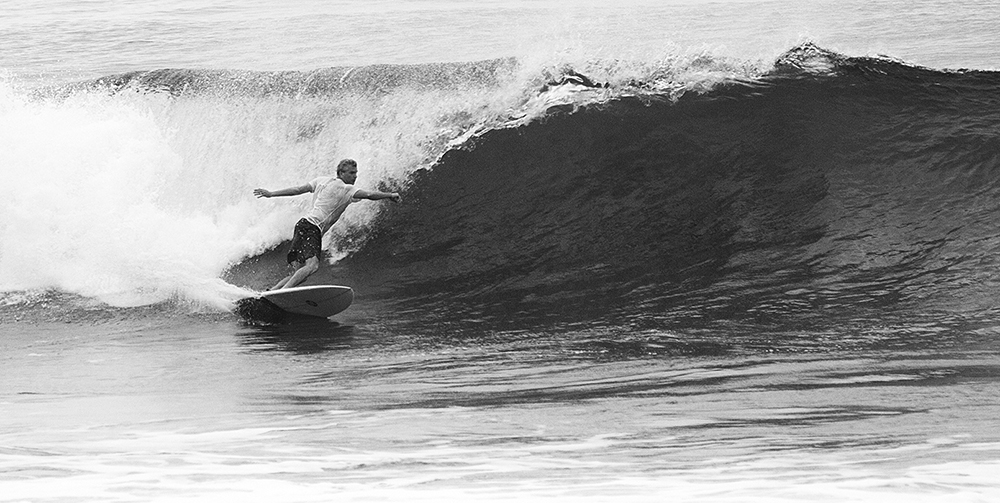 Caldwell surfing off the coast of South America.

While his life’s travels were unplanned, Caldwell somehow always found himself right where he needed to be. “When I look back, I think art is a lifetime continuum,” he says. “You apply all your experiences and it all plays into what you’re discovering as an artist. I just want to share the good vibes.”