His Place in the Sun 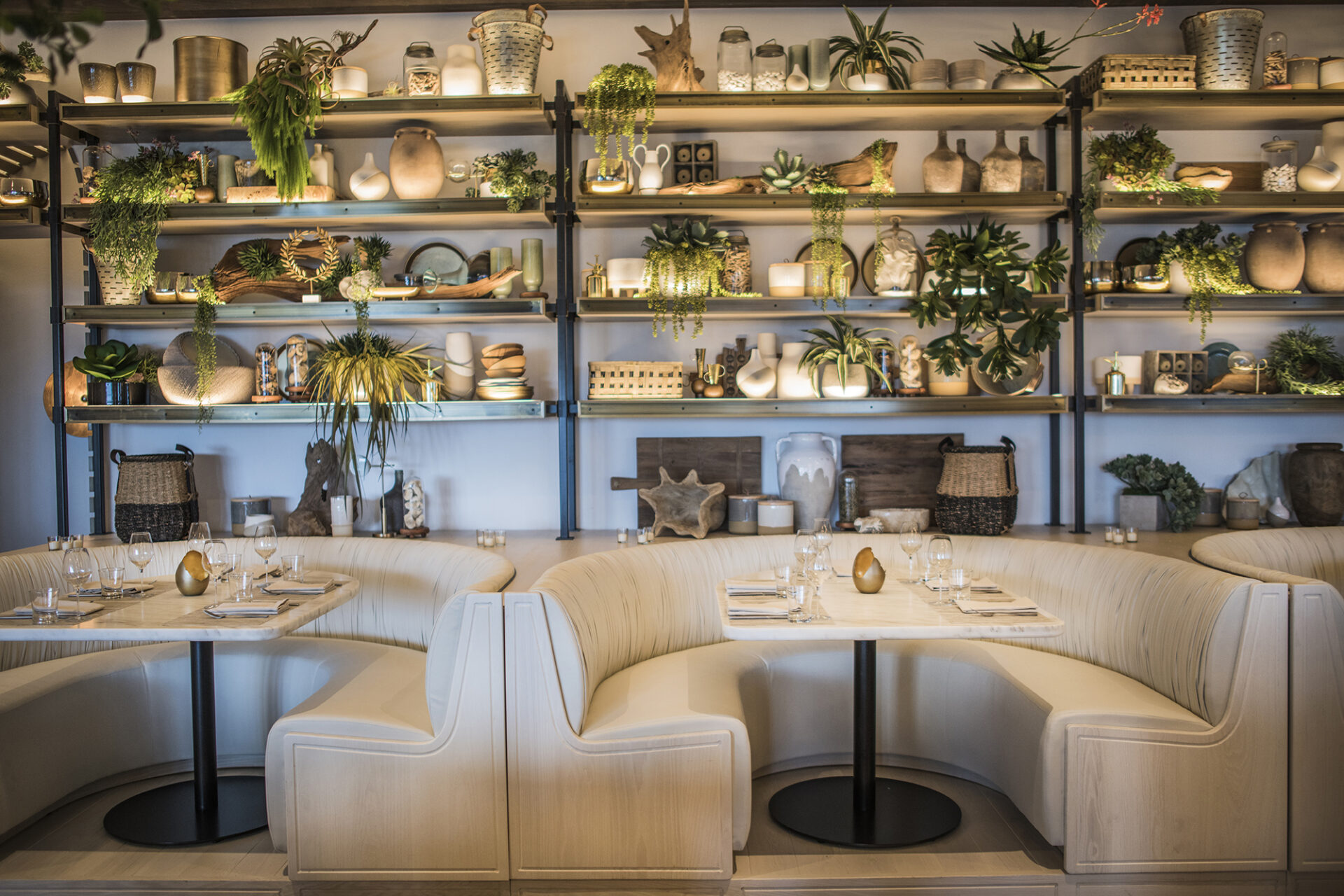 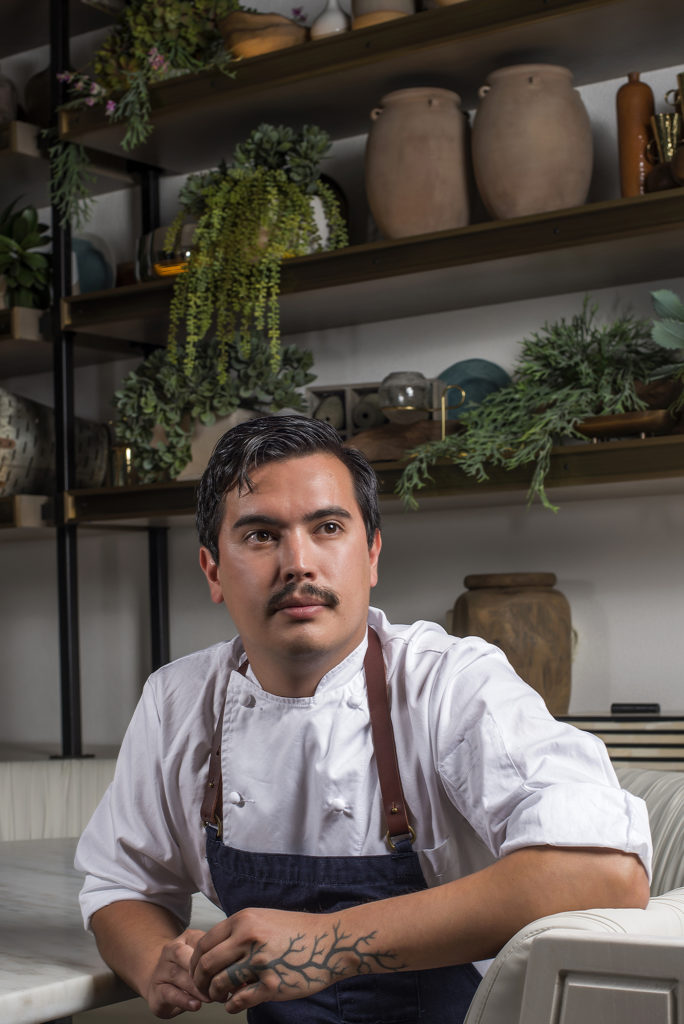 Executive chef Edgar Beas leads the Dune culinary team, which is focused on sustainable and local ingredients. “With the Auberge name comes a benchmark for superb yet uncomplicated dining,” he says.

Make your way up the driveway. Hand your keys to the valet. Enter the front door and right away, you know this isn’t just another condo on the beach. The first thing you see through the 31-foot walls of glass is the Atlantic Ocean.

Relax your gaze and you’ll realize the 12-foot sculpture sitting just beyond that glass is a piece by celebrated Colombian artist Fernando Botero. Called La Maternidad, it features a voluptuous woman and child. Consider this $2 million work of art your earth mother about to envelop you in a luxurious, soulful embrace.

I’ve been told Auberge Beach Residences & Spa is different. Unique, someone said. Quietly elegant. And from the car on A1A, the oversized walls of glass on the sandy side of the street are the first feature to catch your eye. The curving 17-story North Tower has just 56 apartments, many with tiered terraces and their own plunge pools. The larger South Tower curves in a way that perhaps pays homage to the S-shaped Ireland’s Inn that stood on this land for more than four decades, beginning in 1965. 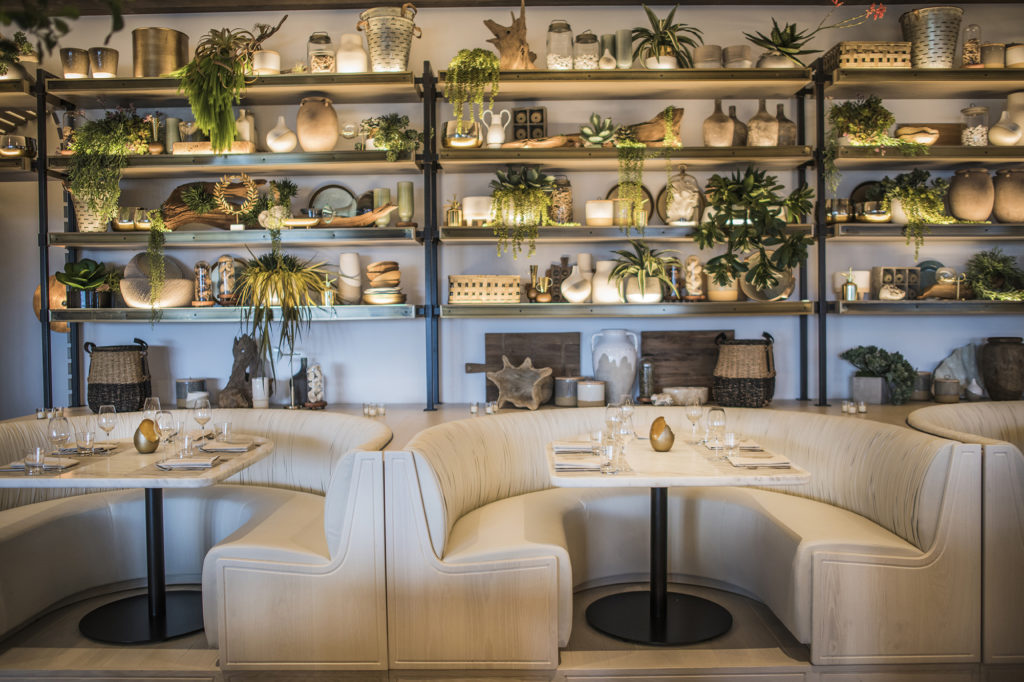 The architecture is strikingly modern, a giant leap forward from its faux Mediterranean and British colonial neighbors. It’s a style that buyers adored, breaking previous Fort Lauderdale sales records. One penthouse sold for $9.5 million (or $1,670 per square foot), making it one of the most expensive condominiums in Broward County. Only a handful of apartments are still for sale.

But there’s no need for envy. Even those outside of the affluent Auberge demographic can experience its offerings at the onsite restaurant—appropriately called Dune—and the property’s newly opened spa. One thing is certain: Whether you’re a resident or just popping in to enjoy a meal or massage, Auberge has upped the city’s high-end quotient.

The story of Auberge Resorts begins 1981, when Bob Harmon teamed up with French restaurateur Claude Rouas to open Auberge du Soleil in California’s Napa Valley. While wine has been produced in Napa since the late 18th Century, the area didn’t become a luxury destination until the 1980s, when its wine started winning international awards.

Auberge added guest cottages to its California restaurant, and the concept of resort living driven by fine cuisine was born. There will soon be more than 20 Auberge resorts, from Napa to Nicaragua and Maine to Mexico. Locations in Hawaii and Idaho are coming soon. The 5 1/2-acre Fort Lauderdale development is Auberge’s first East Coast property and the first marked solely residential.

Coming to Fort Lauderdale was an easy decision for Dune executive chef Edgar Beas. A self-described “California boy,” he viewed the job as an opportunity to return to the beach after spending a few years in the desert of New Mexico and a chance to join a company with a near mythic reputation for what he calls “luxury and sophistication.”

“But they still embrace a simple approach, nothing pretentious,” he says. “As a chef, I embrace making things as simple as possible.” 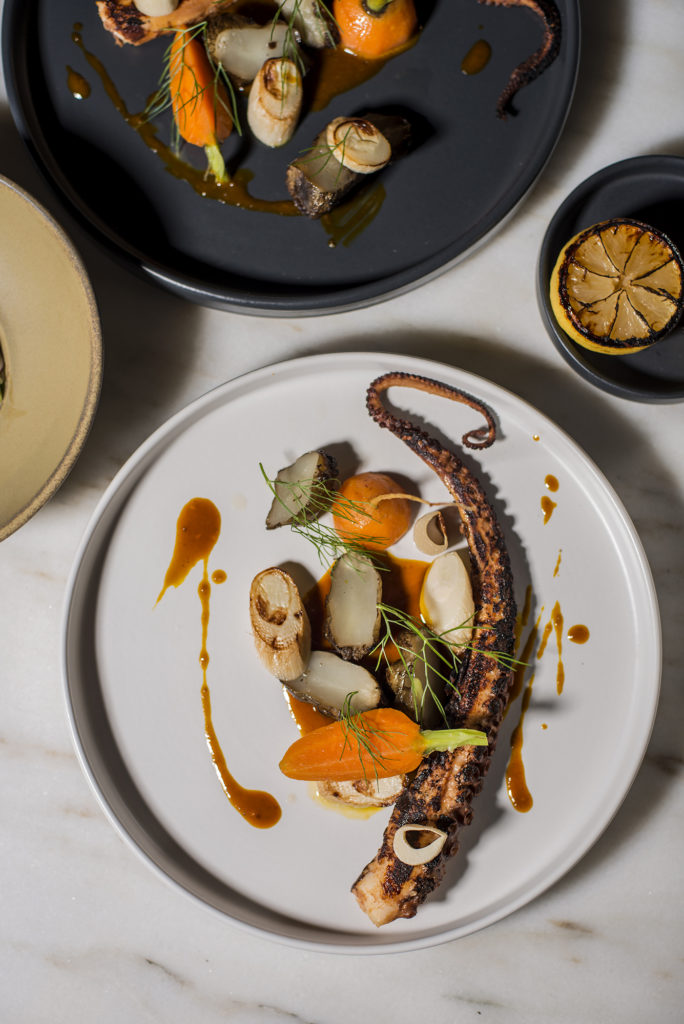 Beas’ resume includes a stint at the three Michelin-starred Restaurante Martin Berasategui in Spain, where he developed a deeper understanding of head-to-tail seafood cookery. Fish cheeks—known as kokotxas in Spanish—are considered a delicacy in parts of Spain and most commonly used in a garlicky salsa verde to accompany seafood. Beas learned that the scales of the red mullet could be scalded with olive oil to create a kind of pescatarian pork rind.

Having grown up on Mexico’s Baja California coast, Beas was already familiar with black clams, mussels and even shark, ingredients his culinary school-trained mother used in her daily dinners. Beas’ sophisticated seafood vocabulary has seeped into Dune, where the menu always features a whole fish—yellowtail or hogfish—cooked over a Josper charcoal oven. The high heat not only cuts cooking time in half but also adds an unexpected crunch. The fish is then deboned in the kitchen and may be served with sunchoke and hearts of palm. Look for hints of that Josper treatment in the pineapple mojitos. Pineapple chunks get a smoky turn in that oven before being cooled for use as garnishes.

“As a chef, I embrace making things as simple as possible.”
—Executive chef Edgar Beas

How much will a Dune meal set you back? “Based on the success of the real estate, people are saying they’ll never be able to come here,” says Tim Arnold, general manager of the entire Auberge operation, from the restaurant to the spa to resident services.

But it’s just not true. Dinner entrees are priced between $28 and $40. Lunchtime entrees range from $18 to $24. Portions are generous. 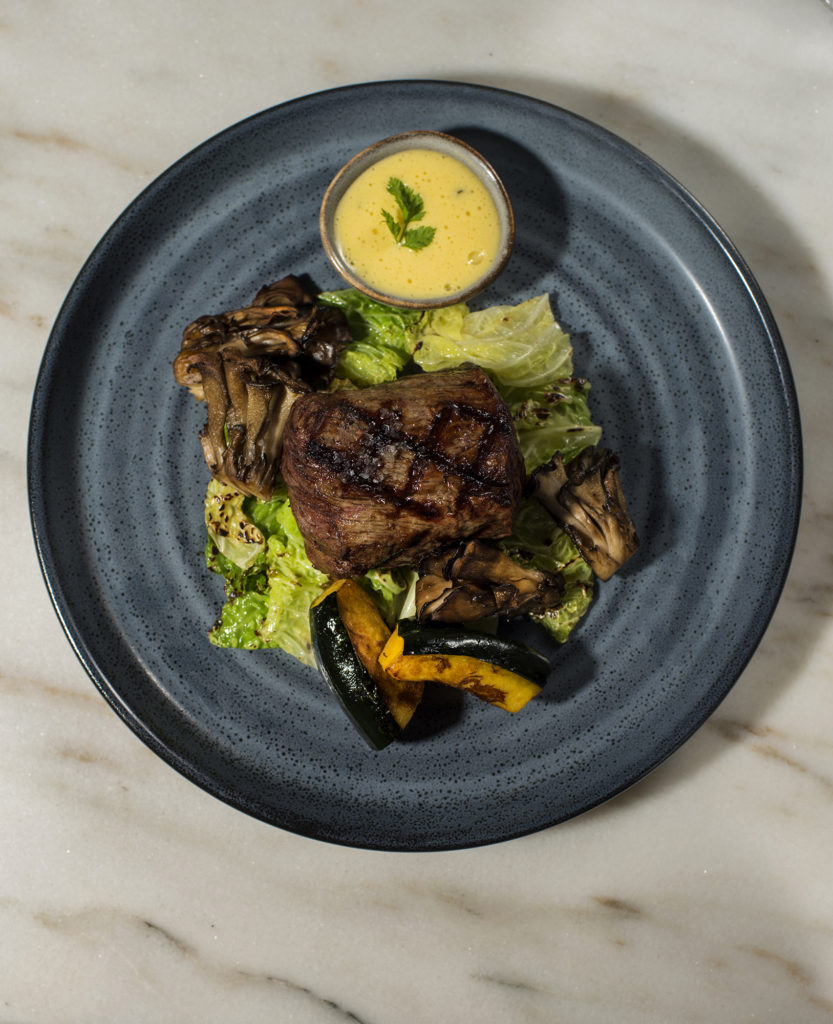 Grilled beef caps on a bed of lettuce with locally sourced vegetables.

Arnold has a long history in hospitality, but he came to Fort Lauderdale because he knew his skills would mesh with the Auberge philosophy. “I wouldn’t come out of hospitality into 100 percent residential operations,” he says. “But this is more of a hospitality environment that I’m accustomed to—creating resort-style living.”

Arnold opened all of the Margaritaville restaurants in Hollywood and once managed the entire food and beverage operations at American Airlines Arena in Miami. He has also made stops at Canyon Ranch and Mondrian Hotels.

At Auberge, every aspect of service is imbued with a philosophy Arnold calls a “soulful journey.” A Dune experience means treating guests like they’re at a new-generation beach house. Growing up in Indianapolis in the 1970s, Arnold and his family would travel south every year to spend two weeks over the Fourth of July in Lauderdale-by-the-Sea. While Dune is a big step up from the fish houses of his childhood, he wants the restaurant to be just as comfortable and somehow familiar.

That’s why all Dune diners start their meal with a basket of warm hush puppies served with a saucer of lavender-scented honey. Arnold’s second tenent of the guest experience acknowledges that while patrons come to the beach to relax, they also want to be energized and excited, whether with an unexpected flavor or unique live music on the oceanside terrace. His final service instruction to employees is to treat guests with “open arms and an open mind.”

Food-wise, Arnold says Beas’ menu grows out of the chef’s masterful use of South Florida’s bounty. “You shouldn’t be in the restaurant business if you aren’t finding the best ingredients possible,” Arnold says.

Like the Auberge lobby, the brightest color at Dune comes from the turquoise-blue ocean and radiant sky. Otherwise, the 150-seat dining room dazzles with a sophisticated palette of beige and cream. With room for another 135 diners at its outside patio, Dune is the largest restaurant in the Auberge portfolio.

Unlike eateries at its resorts and hotels, Auberge’s Dune won’t be providing room service to the apartments of residents. But true to Auberge’s Napa Valley roots, its tenants do have access to the wine tasting salon. As for Dune’s own wine offerings, look for a brief list of just 60 to 80 bottles, with 80 percent from California. 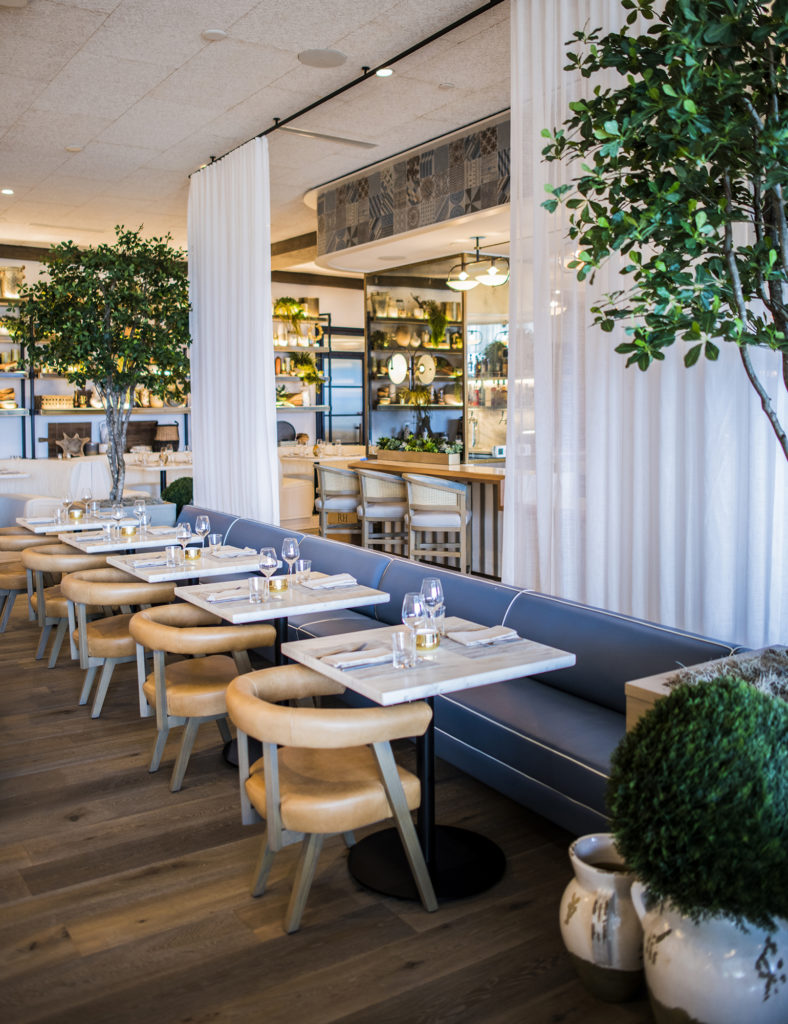 The restaurant features an oversized free-standing bar, as well as spacious tables that combine traditional and banquette seating.

“People like gathering and showing off,” says Patrick Campbell, vice president of Miami’s The Related Group, one of the developers of the Fort Lauderdale property. “They want to show off their wine collection, and they want to sit and drink it.”

Wine lockers in the salon cost between $3,000 and $9,000, even though wine fridges—along with Wolf gas ranges and steam ovens—are standard in every apartment. Those gas ranges, found in only a handful of South Florida’s most luxe buildings, add about 5 percent to the asking price, Campbell says.

The owners of at least one Auberge apartment will be familiar to many in South Florida: Kathy Ireland Mitchell and her husband, Andy Mitchell, founders of The Fairwinds Group, one of three partners in the project. Ireland Mitchell’s grandparents and parents operated a hotel and restaurant here for more than four decades.

She and her husband remember a different restaurant, where the specialty was pan-fried chicken. It wasn’t unusual to serve 700 diners at breakfast. Special occasions like Mother’s Day and Thanksgiving saw as many as 1,800 guests.

About 10 former Ireland’s Inn employees were hired for kitchen and spa positions at Auberge, a continuity the couple applauds. “There’s soul in this site,” says Mitchell, who was instrumental in putting together the property that now comprises Auberge. “It’s not just land.”

When it came time to choose an apartment, Ireland Mitchell made sure their residence sat as close as possible to the location of her grandparents’ old place.

“I’m lucky,” she says. “I get to wake up every morning in my grandmother’s kitchen.”