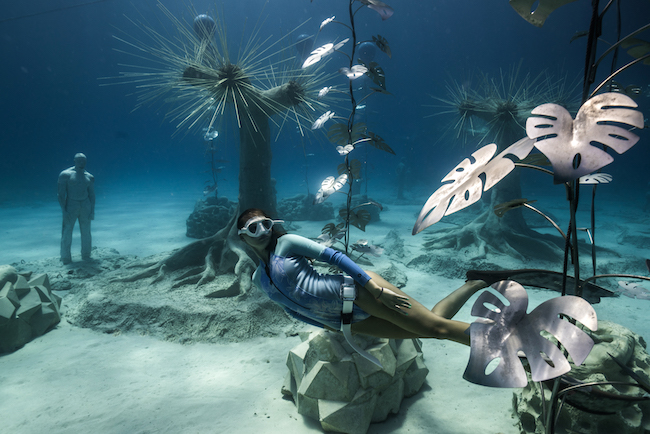 Most artists don’t have to worry about boat propellers whizzing by their heads during installations of their work, but Jason deCaires Taylor isn’t most artists. A pioneer in underwater sculpture, he’s endured his share of close calls. “I’ve been in shallow areas where I was working only a meter or two beneath the surface, and it’s a big problem trying to stop boats from going overhead,” says deCaires Taylor, 47. “Sometimes the lifting equipment breaks, so I’ve had large objects fall down and almost kill me. You can get heavy equipment trapped between sculptures, and it’s quite hard to get out.” 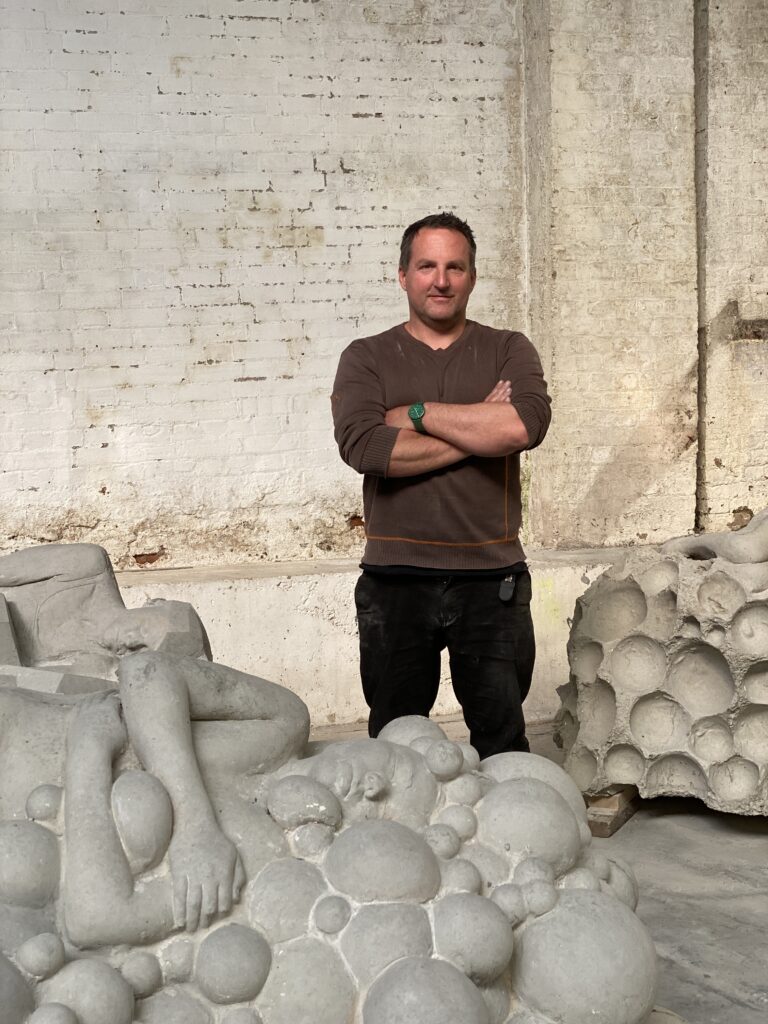 These are just some of the inherent risks of his chosen profession, as a seminal figure in this largely untapped medium. Beginning with what has been called the first underwater sculpture park, in Grenada in 2006, deCaires Taylor estimates that he has produced “well over 1,000” pieces. Blanketed in algae and blooming with coral, his stone sculptures evoke life more commonly associated with terra firma: a male figure, buttocks upward, his head buried in the sands of the ocean floor; a circle of humans joining hands as a divine light pierces the cocoon they’ve created; a child burying his face in his hands. DeCaires Taylor’s work can be as whimsical as it is rapturous, and it often brims with symbolic heft—like the image of a dozen-plus migrants, exhausted and eternally marooned on a dinghy, or his series of oilmen riding workhorses, trampling and exploiting the ecosystem.

Raised in a family of artists, deCaires Taylor studied sculpture at university, and worked as a paparazzo and dive instructor before pursuing art full-time. He found his muse when he began to consider the links between art, exploration and conservation. “It dawned on me that two-thirds of our planet is water, and artistically, we’ve hardly explored that in any capacity,” he says. “That was my biggest motivation, and when I realized that the works could also be about conservation, I realized I was on the right path.” 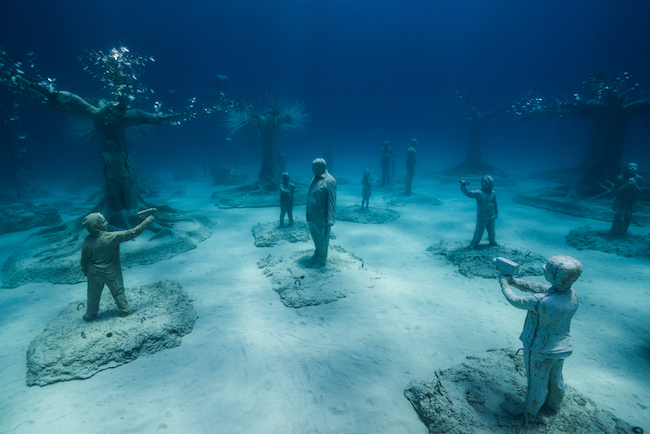 Putting the ‘art’ in artificial reefs, deCaires Taylor’s works will soon become home to the ocean’s many inhabitants.

DeCaires Taylor is proud that his contributions have provided vital habitat for marine life. “The installation in Cancun is around 400 to 500 sculptures, and it was in a barren stretch of water when I first visited,” he says. “Now when I go there, it’s completely inundated with life. There are hundreds of hard corals, soft corals, Gorgonian fan corals, tunicates, sponges of all different colors and literally thousands of fish. It’s really nice to know that wasn’t there five years ago, but it’s now there because of that intervention.” DeCaires Taylor’s works are as art-historical in their production as they are urgent in their ecological subtext. Art critic Carlo McCormick, in an essay in a 2014 catalog of the artist’s work, likened its awesome power to the Sistine Chapel, adding, “Jason is practicing a kind of art-making that is as ancient and elemental as is conceivable in this twenty-first century of civilization.” 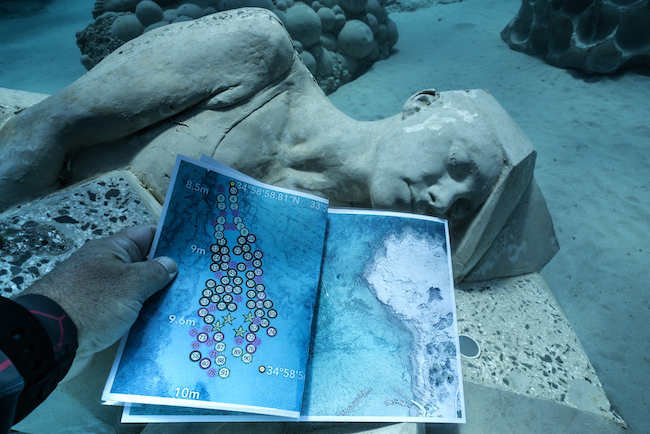 “IT DAWNED ON ME THAT TWO-THIRDS OF OUR PLANET IS WATER, AND ARTISTICALLY, WE’VE HARDLY EXPLORED THAT IN ANY CAPACITY”
-JASON deCAIRES taylor

The nomadic deCaires Taylor was raised in Malaysia, has lived in Thailand and the Caribbean, and spoke to Venice from his current home in England. His work has led him to become something of a citizen of Earth, accepting commissions for submerged sculptures from local government agencies around the world. “In the past 15 years, I’ve moved to different countries three or four times, built about five studios, made works in the Pacific Ocean, Indian Ocean, Atlantic Ocean, Mediterranean, England, the Caribbean,” he says. “It’s been pretty intense.”

His most recent accomplishment, unveiled in March 2021, is the Museum of Underwater Sculpture at Ayia Napa off the island of Cyprus, a 93-piece “underwater forest” financed by the Department of Fisheries and Marine Research, the Ayia Napa municipality and Cyprus’ Ministry of Tourism. “Natural forests and jungles tend to be hubs for biodiversity, and so I wanted to simulate that by creating a forest underwater,” deCaires Taylor says. 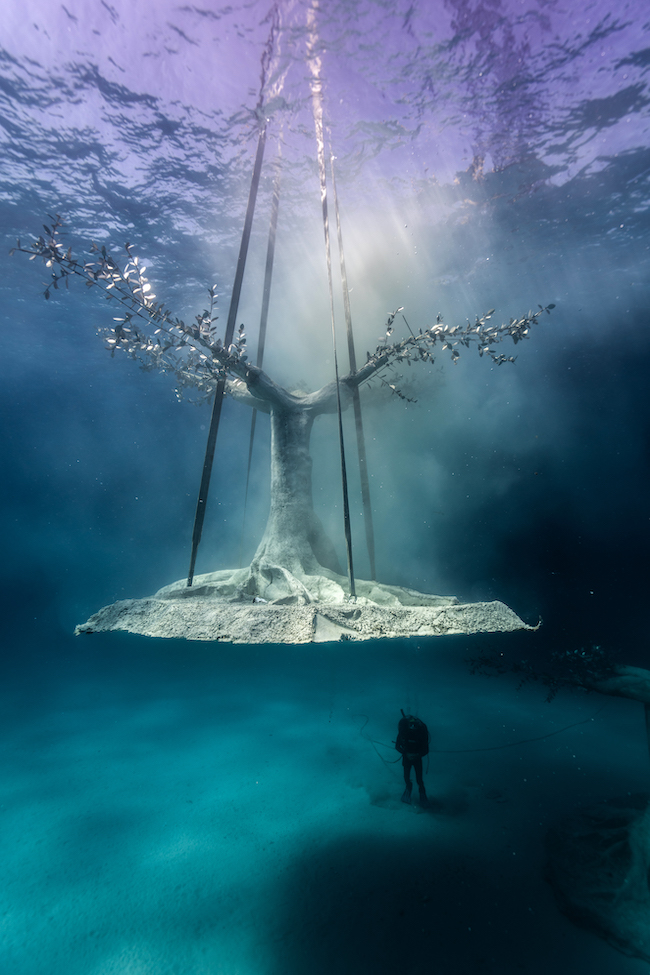 Even the dangers of his chosen profession won’t deter deCaires Taylor from his life’s work.

Since he began his underwater venture, the sculptor has seen a few other intrepid diver-artists follow his lead. But he is a long way from running out of canvases. “It’s incomprehensible how much space there is underwater,” he says. “[In Cancun], we did an analysis of how much of the seabed we’d taken up with almost 600 sculptures. And it was zero, zero, zero times 20.” “Sometimes I build sculptures in the studio, and I’ll fill the studio up, I’ll fill the car park up, I’ll fill the road up outside, and it just looks like the biggest land exhibition you’ll ever see. And then I put them in the ocean, and it’s a tiny dot on the seafloor.” Adds deCaires Taylor, “My objective is to make the ocean as accessible and as attractive as possible to people who never considered going there. I don’t tailor my work for experienced divers. It’s more about encouraging people who have never even thought about going underwater to consider it.”

While deCaires Taylor’s sculptures aren’t viewable off the coast of South Florida just yet, cities like Pompano Beach are doing their share to line the ocean floor with habitat-rich manmade objects. Divers can explore the city’s Shipwreck Park, just a mile offshore, which contains the wrecks of 14 vessels, including the Lady Luck, Okinawa and historic SS Copenhagen. The easily accessible dive site is part of the region’s rich artificial reef system, and is home to a vast variety of marine life.