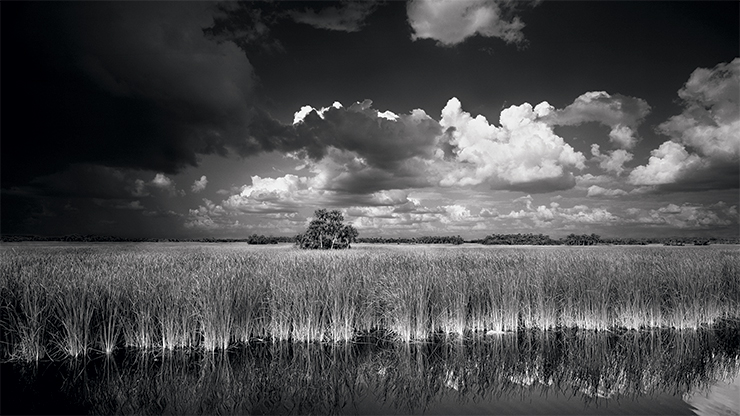 Hung up in Clyde Butcher’s Ochopee gallery is a massive black-and-white photograph that took 11 years to shoot.

He discovered the Cigar Orchid Pond in the Big Cypress National Preserve with friends. A tree in the center had low-lying branches framing the swamp behind it, but there was an empty space that needed to be filled, the perfect cast of sunlight and more growth of ferns cascading through the arbor. For years, Butcher ventured back to the spot, waiting for the wilderness to grow into itself and possibly take on the image he’d been storing in his brain.

Then, finally, it happened.

“It was amazing,” Butcher remembers. “It was August, and I was hot and tired. We had a hard time finding the spot. We had taken probably three hours to find the spot again.”

TECHNICALLY SPEAKING: Known for his large, mural-sized images, Butcher is photographed here with his 11-by-14-foot view camera in Everglades National Park. Butcher works out of a 2,000-square-foot dark room.

One snap of the long-term exposure camera, and almost a decade of waiting came to fruition at that moment.

A massive man towering over the swamp, Butcher’s 71-year-old face is akin to Walt Whitman, complete with a white beard that bobs up and down whenever Butcher laughs. Called the Ansel Adams of his time by critics, Butcher’s a renowned landscape photographer who has shown the world that Florida isn’t just sand, surf and retirees. He has regularly ventured out into Big Cypress with up to 120 pounds of photography gear, finding perfect moments to create his standard large-size images.

“You have to scan it, and when you’re here, you’re scanning and your mind’s putting together what it’s all about,” Butcher explains. “My angle of view in some of those images is 100 degrees.”

His life is photography, but get him started talking about protecting the environment he photographs, and he can’t stop—the greed of humans, our outdated plumbing systems, combating global warming and why don’t more people use solar panels?

“They don’t understand that what you do affects the environment. Everything you do,” he says, sitting outside just yards away from wild Florida swamp.

He has Fort Lauderdale in his collection of photographs as well, from when he took a canoe out on the north fork of the New River, paddling under Broward Boulevard. But his silver gelatin prints don’t show the hoard of cars barreling over the bridge just a mile away.

“It’s like the Everglades back there,” Butcher says of those shots. “I’ve got pictures back there that you would think you were in Big Cypress.”

Born in Kansas City, Mo., Butcher lived a nomadic childhood shuttling throughout the Midwest with his parents. An only child, he found friends in the local farm children, runnin­g through the woods with bows and arrows, chasing rabbits and squirrels. When he decided to walk home from his four-room schoolhouse instead of taking the 40-minute bus ride, farmers shot at his friends and him as they skirted around their properties.

When he was alone, Butcher would explore the woods with his still camera or shoot 12 mm movies, blossoming his interest in capturing the natural world around him in a single shot. When he visited the Grand Canyon and other national parks, he was in awe of the gaping canyon stretching into the horizon, the colors of the sunset dancing across the sand dunes and ancient rock.

Eventually the family made its way to California for high school, where he learned San Jose is not pronounce “San Josey” (“I got an F-, red circle, in Spanish,” Butcher laughs.) With his experience in boat building and working in a cabinet shop, he decided to study architecture at California Polytechnic State University, which would circle him back to his love of photography.

“I put the model inside of a forest of miniature trees and took a photograph like the thing was already built,” he says of his images from school. “All the instructors thought I was really out there in left field.”

Even so, he wound up teaching a course in model photography as a senior. It was in college that he started dating his wife, Niki. While her family vacationed in Yosemite in the summer, he visited her and slept outside on the ground at night while Niki and her family stayed in the trailer.

The couple—which a staffer described as perfectly yin and yang—share a love of nature, photography and adventure. One night, they were sleeping in sleeping bags on the ground of the park when a bear walked right over them.

During one of his trips to Yosemite, Butcher was introduced to famed black-and-white landscape photographer Ansel Adams. At the time, photography was reserved for weddings, commercial work and photojournalism.

“The first time I saw his work, I actually thought, ‘Why would you photograph a redwood tree unless the tree was for sale?’” he laughs. “But it got me excited, and I started photographing nature.”

“Color’s not art,” Butcher says. “But by 1972, we needed to make a living, so we went to color so we could match the shag carpets and the gold couches and avocado appliances.”

By this time, the Butchers had two small children, Jackie and Ted, and the family lived on a boat starting in 1975. Docked at a mooring in Los Angeles, they had no electricity or water, showered at the local Y and a woman with a runabout would pick up the children to go to school.

Why? To get away from the hustle and bustle of L.A.

“You don’t need much,” Butcher says. “Like, right now, we live in a 900-square-foot house. All you need is each other. [These days], you’re probably thrown in jail for doing this.”

The Butchers eventually moved to laid-back Fort Lauderdale and lived there for a year before moving to even quieter Fort Myers in the early 1980s. Everything in Butcher’s life changed in an instant in June 1986. A drunken driver chasing after another car in a furor of road rage hit the vehicle his 17-year-old son Ted was riding in, killing him.

“When Ted was killed, I?thought, ‘What’s life all about?’ I took all my stuff to the dump and watched a tractor run over it. All the photographs, all the frames, everything—probably $400,000 worth—and threw it away. Watched the tractor run over it,” Butcher remembers.

FORCES OF NATURE: Butcher’s photographs highlight the essence of Florida in its most natural state, including these photos of the Keys and Everglades.

He had been wanting to return to black-and-white photography, and ever since his son died he has not printed a color photo. While his family was in the throes of grief, he found a new inspiration to do more with his photography, to take photos he wanted to take, the way he wanted to, and to make a difference. Two of his bestselling pieces, Moonrise and Ochopee, were shot that summer.

For decades now, Butcher has photographed moving, long-frame landscapes of Big Cypress in the Everglades, capturing water lilies, orchids crawling up the trunks of trees and ferns fanning themselves open to the sun. His best friend and fellow photographer, Oscar Thompson, introduced him to the beauty of the swamp when he showed him his own photographs. Thinking it was an exotic locale—perhaps Africa or the Amazon—Butcher was shocked to find out it was in his backyard.

“This is primeval,” Butcher says of the landscape surrounding his gallery and Florida home. “This is what the world was like at one time. This is what man needs to see.”

BRANCHING OUT: Despite having digital technology around him, Butcher still prefers the old-fashioned box cameras to create his large-scale images.

Now living in Venice, Fla., with his wife, the family runs two galleries and leads the wave in environmental advocacy. Butcher often speaks to local advocacy groups and politicians about protecting Florida’s wild side, and donates his work to nonprofits.

But perhaps the most effective way is to bring people out to see the Everglades for themselves. The Butchers and staff members offer swamp walks twice a day on Saturdays with seasonal workers to show visitors and residents the habitat just off the Tamiami Trail. Former President Jimmy Carter has done the walk himself.

Immersed in the environment, the explorers are armed with cameras and walking sticks and wade through the thigh-high water just like Butcher, precariously tripping over hidden logs and limestone, but most importantly, admiring the scene around them.

Just without the 120 pounds of gear.

Originally appeared in the Premiere 2014 issue.