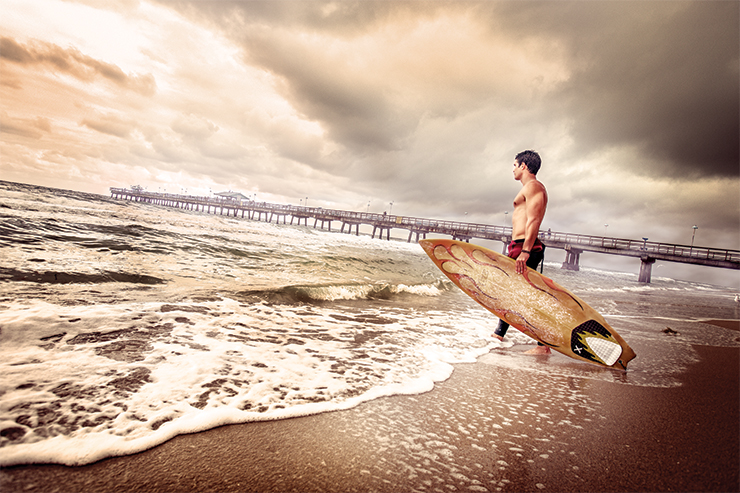 You and I haven’t thought about waves today. When we do think about them, it’s usually nothing more than a quick note of their appearance while we’re at the beach. We might say something like, “Those waves look rough today,” before turning our attention to something else. Even at their most considered, the waves are an afterthought in our lives. If we go to the beach and the ocean is as flat as a lake, it doesn’t bother us. If the beaches here never produced another wave, we wouldn’t lose sleep.

For the average person, our lives have never and will never revolve around waves. You and I can’t tell the difference between a closeout, crumbly, reform, tubing or double-up wave. We don’t define our lives in relation to waves, and seeing them doesn’t bring back cherished memories.

But, then again, you and I aren’t surfers. We didn’t spend our formative years chasing after the next great set. We’ve never raved to anyone about a killer session we just had.

“Generally, in South Florida, it has to be windy in order to get surf,” says Todd Kline, a former pro surfer who grew up in Fort Lauderdale. “In other parts of the world, the swells come from long distances. Because of the Bahamas, it’s local, wind-based surf here, [which leads to] a fast and dumpy wave.”

Most of us haven’t ever thought about the position of the Bahamas, but to Kline, it makes all the difference. As he suggests, the waves in Fort Lauderdale and other parts of South Florida are unique because of the state’s geographic position. Unlike other surf destinations, like Australia, Hawaii or even Japan, South Florida is not lucky enough to find itself in the middle of the ocean. And, in contrast to its surf sibling California, South Florida is prevented from receiving the large swells of the Atlantic Ocean because the Bahamian islands lie right off of its coast. This wave blockade extends all the way up to just short of Palm Beach, which blesses cities like the latter, Melbourne and Cocoa Beach with Florida’s most fertile surfing grounds.

But when we do produce surf—particularly during the surf season of October through April—it’s memorable. Fort Lauderdale is also home to a unique phenomenon known by locals as a “bounce swell,” which occurs when the wind blows in strong from the north and the Gulf Stream increases in strength, causing the waves to actually bend back into the coastline.

“I’m sure there are other places that have their phenomena, but there’s no other place that really has that,” says Kane Barrie, owner of a local surfboard design and shaping company called Nightmare Shapes. Even though it’ll be flat up the Florida coast, the Fort Lauderdale waves, Barrie says, “will get huge. It’s very, very fickle, though.”

And it is the fickle nature of the waves in Fort Lauderdale that are undeniably frustrating for local surfers. There is simply no consistency in wave quality. In the morning, there might be four- or five-foot waves, but by the time the sun sets, the ocean is already flat. The lack of a stable supply of high-quality waves makes it difficult for Fort Lauderdale surfers to train on a regular basis.

For this reason, Fort Lauderdale has failed to act as a breeding ground for professional surfers. While Florida has produced some of the world’s best, they’ve come from places like Cocoa Beach, Sebastian or New Smyrna Beach. Kelly Slater, who has won the ASP World Championship Tour a record 11 times and is arguably the world’s best surfer, is from Cocoa Beach, as is decorated female surfer Christa Alves. World-renowned surfers Cory Lopez and Frieda Zamba are from Dunedin and Flagler Beach, respectively.

Although the Fort Lauderdale wave has hindered the development of its surfers, it has given far more to the community in return. Primarily, it has gifted the community with not only a passion, but also an appreciation for surfing that just isn’t found in other parts of the world. Due to the limited opportunities for waves, Fort Lauderdale surfers can’t be picky. Waves that are deemed great in Fort Lauderdale would be sneered at in places like Hawaii and California—not even worthy of being ridden.

BEACH BOY: After relocating from Australia to Fort Lauderdale, Kane Barrie has continued designing surfboards for his company, Nightmare Shapes.

“I call them wave snobs sometimes,” Dutch Schorn says about the spoiled surfers in other parts of the world. “We don’t take it for granted. We appreciate what the ocean has to offer. That’s just what we do.”

And if there is one man who knows the South Florida wave, it’s Dutch Schorn. He’s been surfing here for more than 30 years and working at Fort Lauderdale’s flagship surf shop, BC Surf & Sport, since 1992.

He has seen and been a part, both as a participant and a judge, of a thriving surf contest scene in South Florida that has recently fallen off. Although Schorn admittedly misses what the contests bring to the area, he’s also hesitant of what the proliferation of competition surfing—and the attitudes it brings with it—is doing to the sport.

HOW SWELL: Dutch Schorn is an instructor at his Fort Lauderdale surf school, Hang Loose.

“You used to surf because you and the ocean were one. Now it’s just like competition, and what I’m seeing is ‘give-me, give-me,’” he describes of the mindset. “I’m trying to build that camaraderie back with surfing and make it more soulful.”

When Schorn says he’s trying to build that camaraderie back, it’s not just talk. He not only sees the surfing community through his time at BC Surf & Sport, where he works with friend and fellow surfer Bruce Cromartie; he is also actively developing the next generation of Fort Lauderdale surfers through his work as a surf instructor at his school, Hang Loose.

For Schorn, all his tireless work in the surfing community comes back to one word: appreciation. He is deeply appreciative that the waves have allowed him to make a livelihood of them, while also producing some of his most cherished memories. As Schorn explains, one of those moments involves a local surfer he looked up to, Pete Felito.

“I bought my first surfboard at the Water Brothers surf shop,” he says. “Pete was the owner then. I still remember him getting barrels and tubes, and I still think of him when I’m out in the water. That’s not cheesy. It’s real. The ocean has literally given me everything in my life.”

As Schorn’s experience has spoken to, there seems to be something magical, almost otherworldly that surfers experience in the waves of Fort Lauderdale. There’s an electricity that the waves hold here that just isn’t found in other locations. It’s something that comes up again and again with each surfer I speak with, and they do their best to help me understand how they feel.

CATCH A WAVE: Local surfing has had a great history. Here, a group of surfers ride the waves in Dania Beach, 1967.

“I like the fact that everyone is so excited when there is surf,” Kline says. “It’s a great experience to have that in the water. You don’t really get that in other places around the world—it’s the one thing that is unique to Fort Lauderdale.”

But, no matter how hard I try, or how many kind explanations are offered to me, I still can’t quite put my finger on the feeling these waves give to Fort Lauderdale surfers. While I understand the gift the wave has given the surfers in a practical sense, I can’t grasp it on a personal level.

“The people from here are very passionate about surfing,” Barrie explains. “Even if there are subpar conditions, everyone is out. That stoke is something you’ll really find down here.”

While his explanation helps, I’m still left searching. What is the “stoke” Barrie speaks about? Why don’t I feel it when I’m out in the ocean?

In the end, Mike Marsh, local surfer and recent founder of boardtrader.com, an online extreme sports platform for the board industry, offers me the only explanation I think I’ll really be able to understand.

“It’s a state of peace for me,” he says. “There’s a famous quote that goes something like, ‘Only a surfer knows the feeling.’ It’s true.”

And perhaps that’s it: you and I will never know what the waves feel like to the surfers…or maybe I’m wrong.

“It’s never too late to start,” Marsh adds, with a laugh.

Originally appeared in the Premiere 2014 issue.

In Her Shoes: Serena Dyer