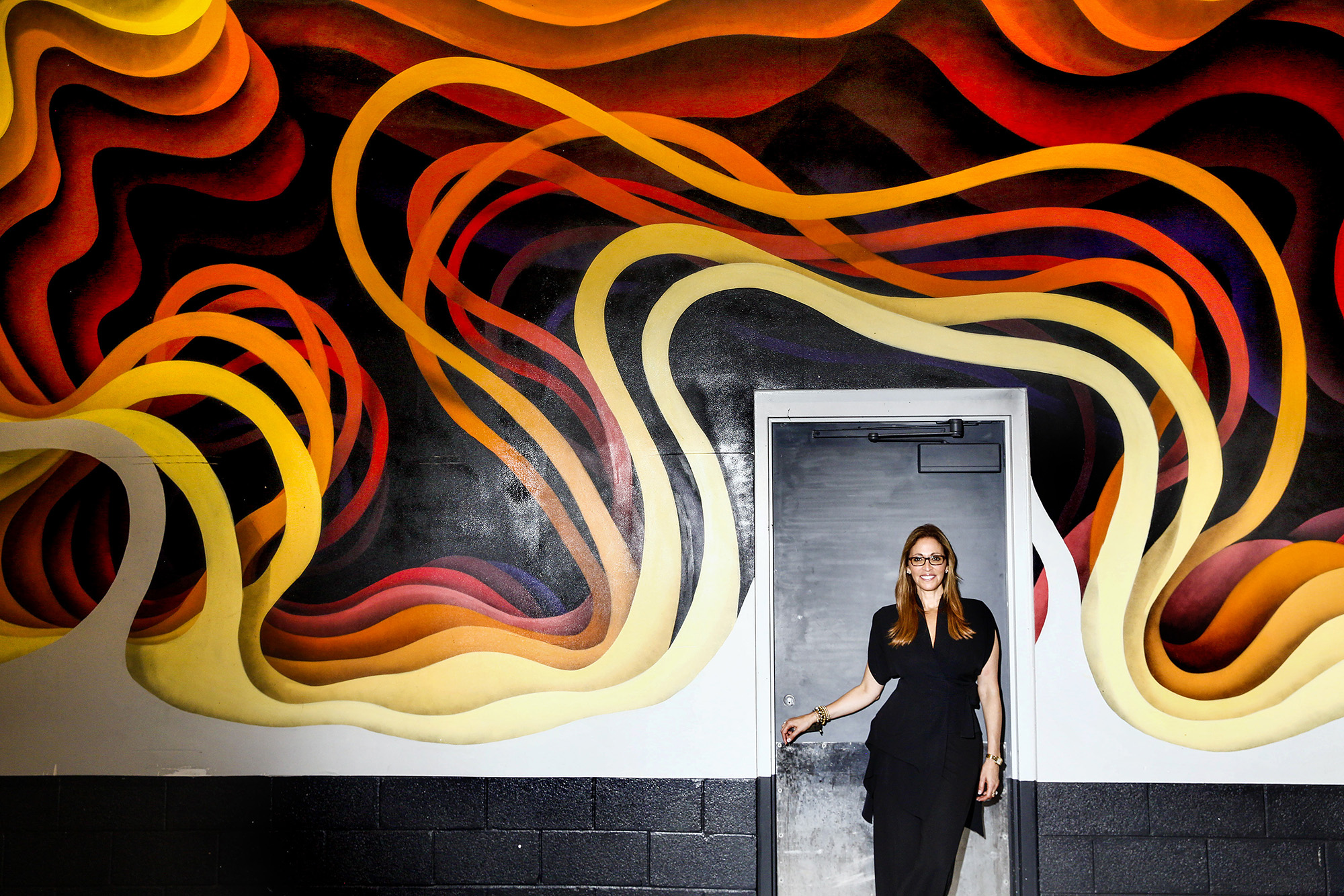 Wind whistles through a maze of cold stone passages beneath the Hard Rock Stadium in Miami Gardens, creating a bustling ecosystem within towering gray walls, centered by manicured green lawns. An army of police and medical staff, foodservice workers and laborers, and athletes and executives skitter about with intermingled purpose. Buzzing along makeshift roads on a six-person golf cart is Jessica Goldman Srebnick, a real estate developer and street art patron, who passes a colorful mural and excitedly describes how street art transformed muted corridors into powerful reminders of our connected nature, and in the process has continued to progress a renaissance in South Florida’s arts scene.

Humans have always felt the need to scratch evidence of their existence into the walls they inhabit—something that says, “I was here.” Nearly 17,000 years ago, prehistoric cave dwellers in what is now known as Lascaux, France, painted symbols and animals on the walls of their dwellings. Two millennia ago, gladiators marked pre-emptive epitaphs into the walls of Rome’s Colosseum. Modern urban pedestrians are inundated with layer upon layer of ads, televisions and glossy images dedicated to selling a concept, place or product.

In the early 1980s, graffiti artist Keith Haring co-opted ad space in New York’s subway stations to develop a modern hieroglyphic language that bridged the gap between gritty urban life and highfalutin gallery culture. His work—and the work of others in his circle—put control of the streets back in the hands of the masses instead of the privileged few. Further, it took subversive and often temporary art and made it permanent. Public art had evolved from graffiti to street art to high art.

When Stephen Ross, chairman and founder of the Related Cos., became the majority owner of the Miami Dolphins in 2009, the developer inherited his own minicity in Dolphin Stadium, now named Hard Rock Stadium. Built in 1987, the stadium had gray walls that gave way to strands of color only in industrial and mechanical spaces, with the exception of advertisements and official team colors: orange and aqua. Ross saw an opportunity to do something different.

After visiting the Wynwood Arts District in Miami, he met with Goldman Srebnick, whose family revitalized a decrepit area of Miami warehouses and derelict buildings into one of the premier arts destinations in the world, where vibrant street artists tell illustrative stories through an evermore sophisticated artistic technique. “Wynwood Walls was groundbreaking because it took street art and made it approachable,” Goldman Srebnick says. “Street art democratized a category of art that many feel is divided between the haves and the have-nots.”

A passionate advocate, Goldman Srebnick believes in the power of art beyond the confines of a gallery. “This is for everyone,” she says. “Wynwood has over a million visitors a year. People always pose by the iconic walls for pregnancy photos, weddings, bar mitzvahs… milestones.” 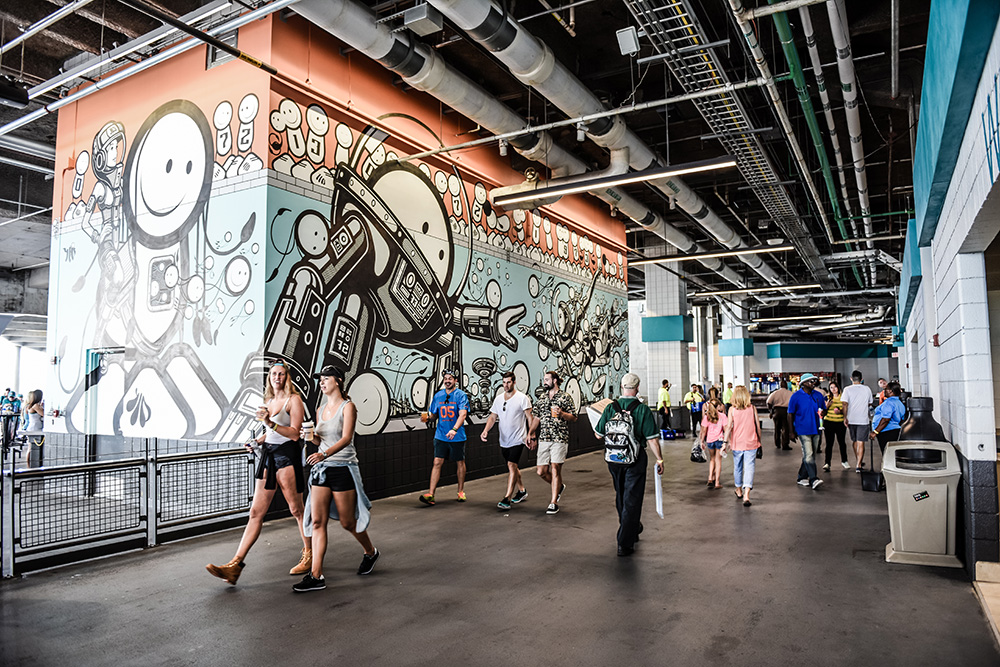 “The Touchdown” by The London Police.

Modern photo-sharing allows local artists to become international names, directing galleries and museums to what the public likes instead of what the institutions dictate should be liked.

Ross commissioned Goldman Srebnick and her company, Goldman Global Arts, to transpose the Wynwood style and bring street art to his imposing gray building. The real estate developers saw the stadium not just as a football venue but as a tool for disseminating Miami culture to the world.

“Miami is becoming an important cultural destination, and this is an international entertainment venue that people visit to be happy,” says Goldman Srebnick, noting events like El Clásico (the rivalry soccer game between Real Madrid and Barcelona), Justin Timberlake and Jay-Z’s massive concert, the newly relocated Miami Open tennis tournament and the Super Bowl LIV in 2020. “Why not make people happy through art?”

Late in 2015, Goldman Srebnick enlisted Wynwood veteran street artists Case Maclaim, Pose and The London Police to paint massive three-walled sections within the stadium. The paintings present nearphotorealist colored hands in one section and comic aliens in another.

“There are a variety of works and styles that would appeal to everyone,” Goldman Srebnick says. “You don’t have to have an art degree to understand it. When I choose an artist, it’s because I admire their entire body of work. They need to be at a level in their career where they can ‘bring it.””

In total, 18 artists from varied cultures and countries were selected to paint the space. Artists including Jen Stark, Vhils, How and Nosm, John “Crash” Matos, Logan Hicks, Momo, Dásic Fernandez, 1010 and avaf quietly began transforming the stadium into a vibrant, living work of art in time for the Dolphins’ home opener in September. 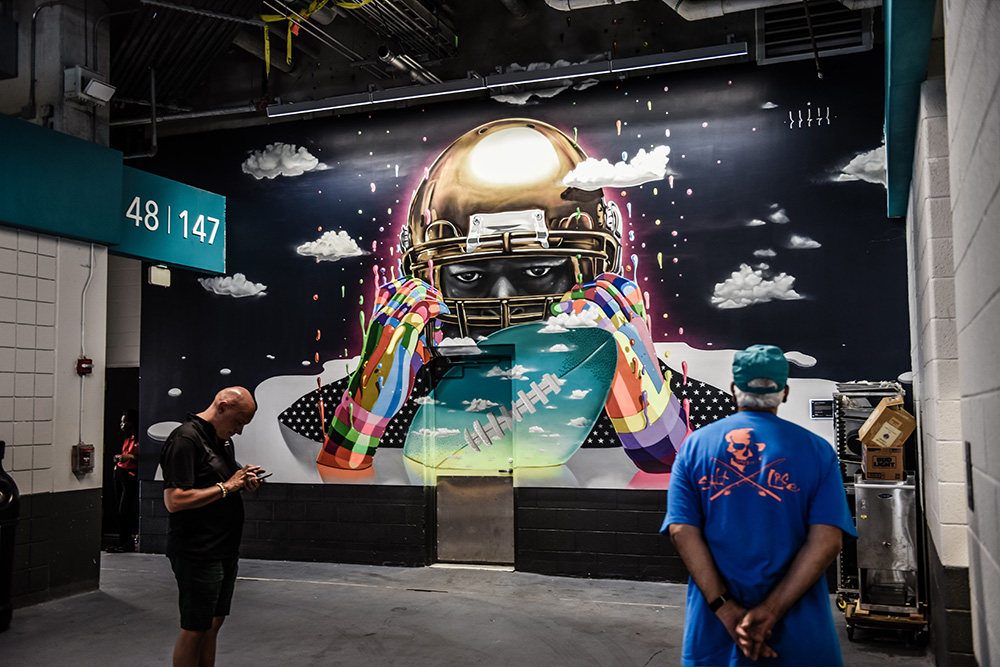 “All The Way” by Dásic Fernandez.

Visible from the interstate, Tristan Eaton’s massive commemoration to Dolphins history, entitled Victory, is one of the only murals specifically football-themed. “It’s important to understand the environment you’re curating for, so we were very specific about not just wanting ‘football art,’” Goldman Srebnick says. Eaton meticulously interweaves layer upon layer of dolphins breaching from an undulating sea with old-school Miami Dolphins logos, notable player numbers (Dan Marino, Larry Csonka and Bob Griese) and memorabilia of Miami’s illustrious past as if torn from the pages of history books. The work amalgamates historical street art and the more controlled commercial art of today, much as it analogizes the former Dolphins greats and the future of the sport.

In 1980, Matos, arguably the godfather of modern street art, curated “Graffiti Art Success for America” at Fashion Moda in the South Bronx, laying the groundwork for street artists who came after him. He transitioned from clandestine painting on the streets of New York to showing work in the esteemed Sidney Janis Gallery in 1983, cementing street art as high art worthy of gallery and museum consideration. Certainly the most oldschool artist of the group, Matos contributes the work Paint War 101 to the stadium, incorporating onomatopoeic “bombs” (modified bubble signatures that take up as much space as possible), comic faces and bursts of color that start solidly and gradually evolve into experimental clouds. The work depicts a hieroglyphic language that takes time to read but creates an immediate sensation of action, motion and kinetic energy.

Avaf (assume vivid astro focus) is the pseudonym of Brazilian artist Eli Sudbrack and French artist Christophe Hamaide-Pierson. Explosive color and retro themes permeate both their stadium works, whose titles mirror their lowercase nom de plume. The first piece, amorous voluminous atrocious ferocious, consists of graphically layered energy bursts emerging and descending into the structure. The second piece by avaf, another vivacious admiring friend, amorphously evokes the world itself, interspersing diverse colors, regions, epochs and modes, neither telling a narrative nor ignoring one. If the former is punk rock, then the latter is ’70s disco. As the artists prominently include themes such as civil rights, free speech and dissolution of class, gender and national identity in their projects, the latter work speaks to breaking down regional barriers.

At the highly trafficked 100 level at the NE 145 section, German artist 1010’s (pronounced ten-ten) Stay Curious frames bustling stadium crowds in a three-dimensional portal, turning traditional art on its ear. The crowd intermingles with the art and palpably becomes part of it. With the cool-tinged Dolphins team colors, the warmth of the yellow, orange and red bands creates visual heat in contrast. Variegated bands of everdarkening hues visually plunge the viewer into the vortex, literally breaking down barriers intended to separate people.

Ultimately, Goldman Srebnick believes that those involved in the project are ambassadors for Miami—and with major international events on the horizon for the 65,000-seat Hard Rock Stadium, there are ample opportunities to inspire. “The stadium is an extraordinary canvas,” she says. “Whatever level of seat you’re in, you have access to world-class art. It’s not a perfect science, but if it appeals to me and it moves me, my hope is that it’s going to appeal to others and move others.”