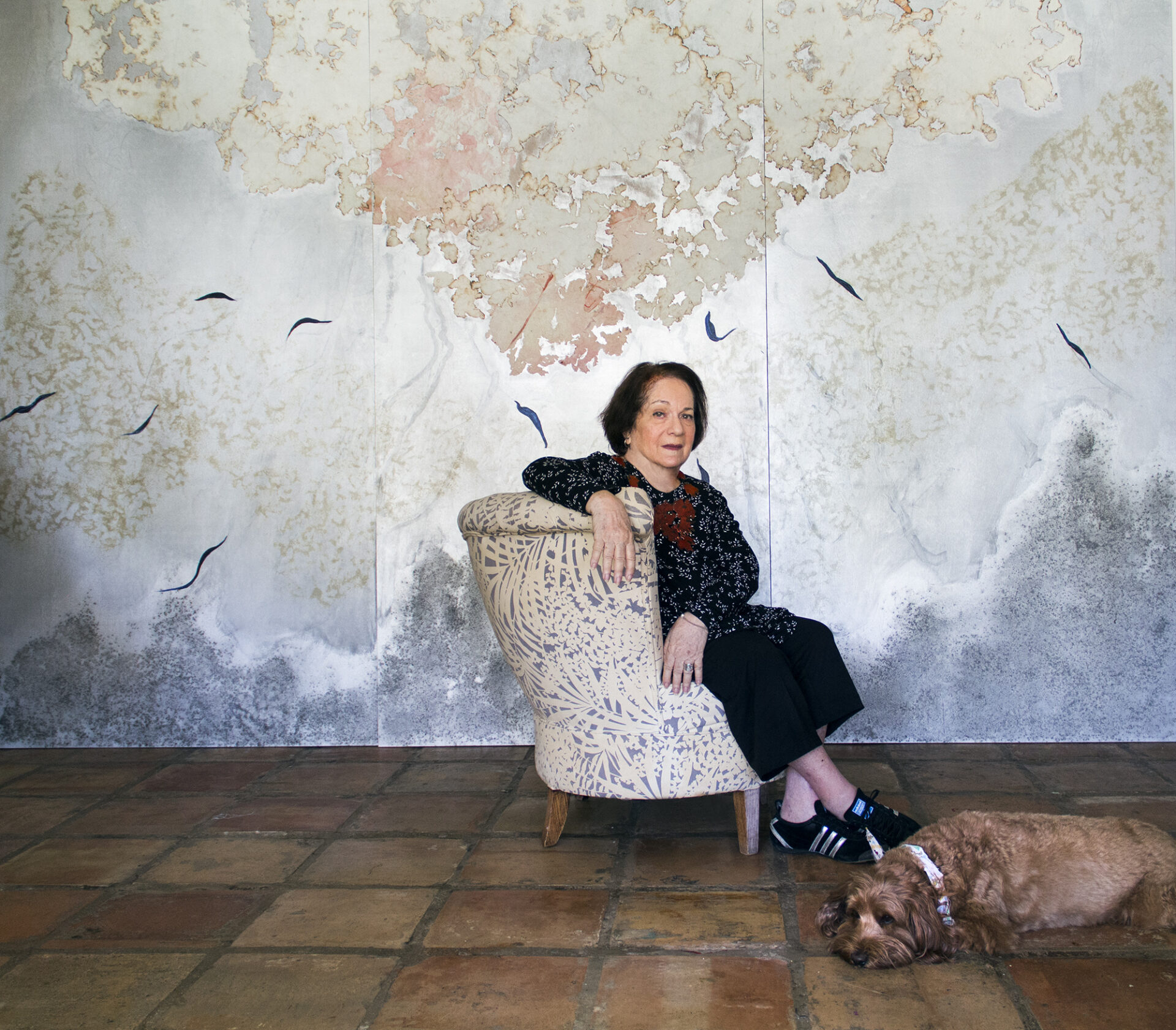 Light streams into Mira Lehr’s foyer. The artist, whose Miami Beach home is surrounded by climbing greenery, is sitting on a couch surrounded by her artwork: a painting here, a resin installation there, a light installation in the other room and a woven sculpture not far away. Lehr has lived in South Florida for over 50 years and has been making art since the 1950s, a time when female artists were often seen as hobbyists and rarely taken seriously.

But time has been kind to Lehr. On September 6, the 84-year-old debuted her solo exhibition “Tracing the Red Thread” at the Museum of Contemporary Art, North Miami, taking over the space with her installations, paintings and sculptures.

Lehr was born in Brooklyn, New York, and raised in Miami. After graduating from New York’s Vassar College with a degree in art history, she moved back to Florida in 1960 with her late husband, David, a cardiologist and the co-founder and medical director of the Pritikin Longevity Center. At the time, South Florida was an artistic desert of sorts—not the museum, gallery and Art Basel-fueled area it is today.

“It’s not ‘Deadsville’ anymore,” Lehr says of South Florida. “If you were an artist in the ’60s and ’70s and you weren’t in New York, you might as well forget it. But it kept me honest.” Lehr took it upon herself to study whenever and wherever she could with artists such as James Billmyer and Robert Motherwell. Artist Hans Hofmann’s philosophies of making art for art’s sake and not worrying about building a career also powered Lehr’s artistic life for a long time. In the 1960s, Lehr co-founded the Continuum Gallery, a women’s co-op and artistic space that was one of the first of its kind in the Southeast. She was also asked to join legendary architect and theorist R. Buckminster Fuller in his 1969 World Game, a project that aimed to develop solutions to global crises.

In 1984, Lehr began to exhibit her art, eventually expanding her work across the U.S. and the world. Lehr’s first commercial show was in 2002 at the Elaine Baker Gallery in Boca Raton, and it saw her work sell out completely. She finally felt she was being taken seriously as an artist who happened to be a woman.

From there, her process changed. Instead of working on three or four paintings a year, she simplified her practice and started producing more pieces. “The paintings were heavy and encrusted and horrible; it was like I was trying to solve every problem,” she says. “But now these are more simple and calm. They’re really very spiritual.”

Lehr’s art is frequently inspired by nature, particularly in South Florida. Some of her mixed-media works feature resin and Japanese paper engineered into lithe yet bold abstract representations of the natural world. Pops of red join with dark lines in floral rendition, white orbs float in blue space like jellyfish and shadows of leaves are silhouetted against a lavender sky as if waiting for the moon.

Today, much of Lehr’s work is driven by a passion for environmental conservation. “It’s a long shot, but that’s the only way I can contribute,” Lehr says. “I’m not a politician, I’m not a writer—so the only way I can bring awareness is by trying to show people how beautiful nature is and how if you love it, you’ll want to preserve it.”

Lehr’s exhibition at MOCA, North Miami follows this theme. The title, “Tracing the Red Thread,” comes from the Greek myth of Ariadne, who gave her lover Theseus a red thread to lead him out of a labyrinth and help him escape from a minotaur destined to kill him. For Lehr, it’s a metaphor for finding a solution to environmental destruction: If we follow the red thread, if we take certain steps, we can perhaps reduce the damage we’ve caused to the environment thus far. In hopes of communicating this in a fresh way, Lehr’s exhibition, which runs until November 4, features almost all new work: eight giant mangrove sculptures made of steel rod-filled rope—so big they had to be brought to the museum in garbage trucks—as well as paintings, a wall of brass-screened cages listing the names of endangered species, channels of jellyfish made with resin and ink, and more. 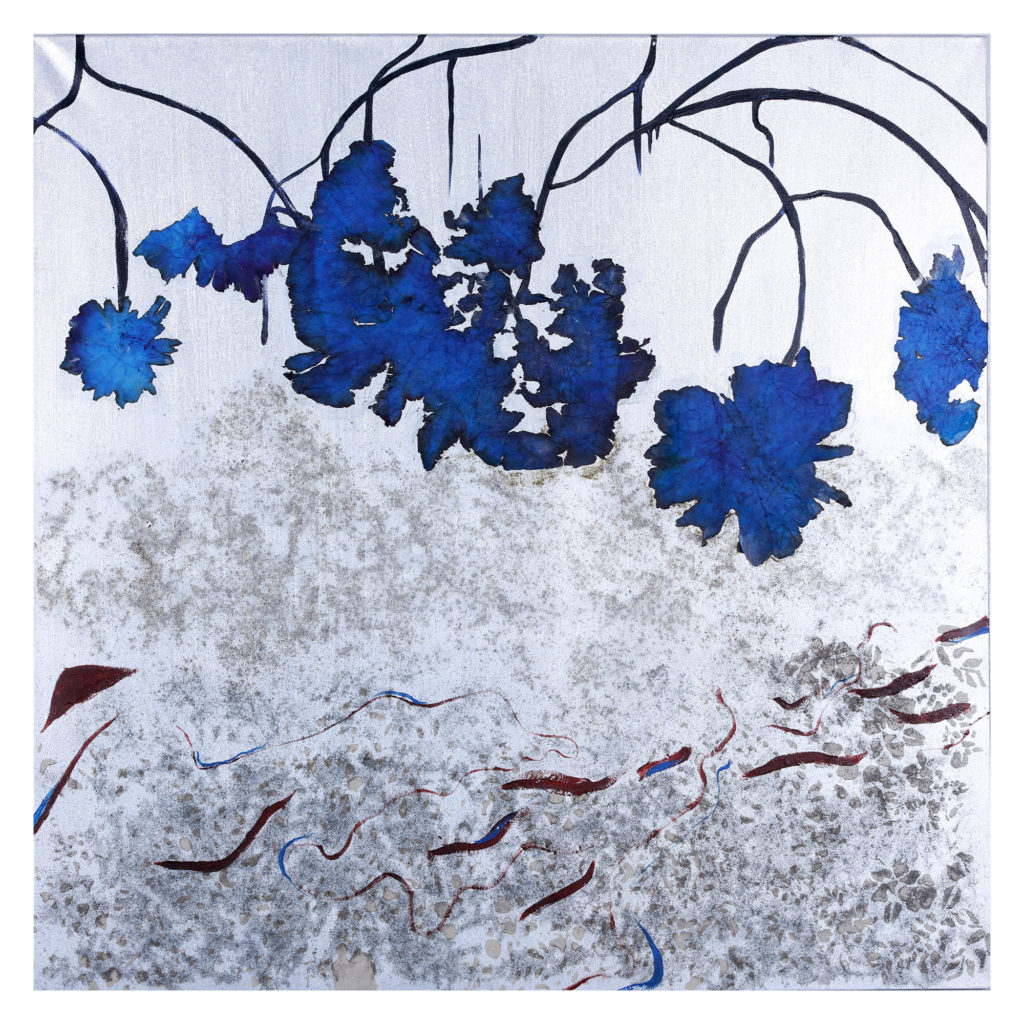 “It’s a tough time in the world with the oceans getting sick, and I notice it in my own little waterway,” Lehr says. She points outside to the blue water rushing beyond the paneled windows. The sun bounces on its ripples, throwing twinkling light. “It’s more than just looking at it and saying, ‘Aw, this is so beautiful,’” she says. “Now I’m thinking, ‘It’s so beautiful, let’s not destroy it.’”

Paint with a Purpose