Paint with a Purpose 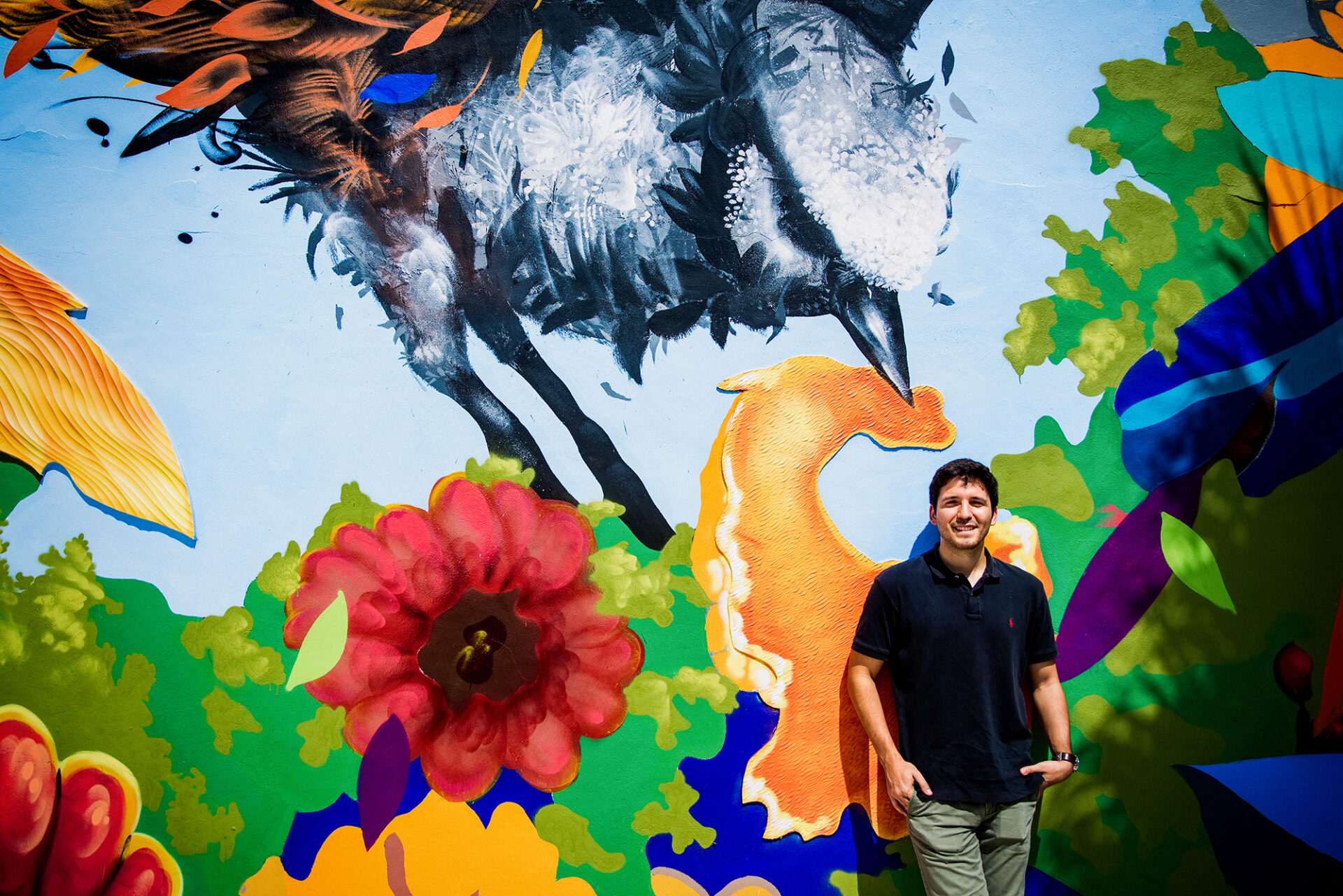 The mural at 650 N. Andrews Avenue started with a question: How do you know you’re in an art district if you can’t see the art?

That was the challenge brought to Jordan Magid just over a year ago by the team behind the Mockingbird Trail, a 2-mile pedestrian path dotted with public art installations slowly coming to fruition in Fort Lauderdale’s blooming Flagler Village.

“I kind of opened my eyes, and my jaw dropped,” says Magid, 27, of the moment he heard about the idea. This was not his first time overseeing the creation of a mural. His company, Unconventional, acts as a matchmaker of sorts between artists and organizations looking for thoughtful art. The prospect of a multisensory mural, though, was new for him. And the location of this particular project had the kind of added social impact Magid loves to seek in his work. The piece would take up the outer wall of the Lighthouse of Broward, a 45-year-old foundation that provides rehabilitation and educational services for blind or visually impaired residents of South Florida. Its office sits just a few blocks from the artsy warehouses of FATVillage. 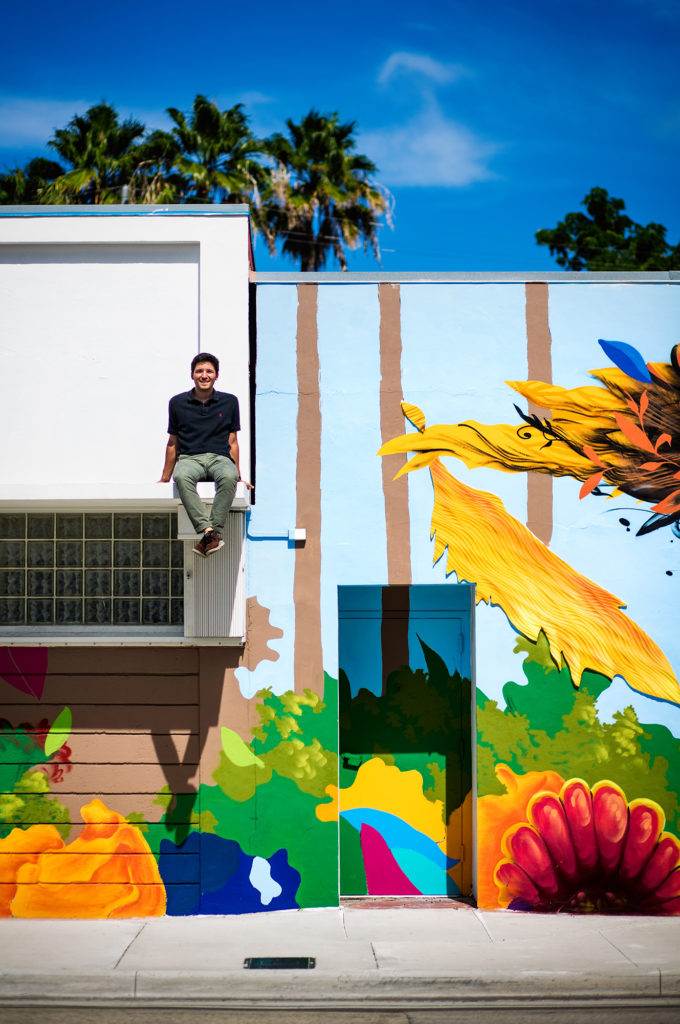 After meeting with the owners of Cadence, a Fort Lauderdale-based landscape architecture firm, about their new multi-sensory mural concept for Mockingbird Trail, Magid brought Unconventional to Broward County. Main Course is the first Unconventional project in the county.

With help from Miami-based artist Ernesto Maranje and a community of volunteer painters, Magid’s team got to work. On January 15—Martin Luther King Jr. Day—over 150 people came to pitch in with painting the mural.

From across the street, the piece is beautiful. The colors are hard to miss: fiery streaks of orange, lush greens and soothing blues. The focal point of it all is a mockingbird (Florida’s state bird) with its shaggy wings outstretched in flight. But if you want to feel the real magic, you need to cross the street and get close—really close. The mural itself is textured, so those without a sense of sight can still experience its depth. Close your eyes and run your fingers along its bumps. Blind and visually impaired members of the Lighthouse of Broward not only helped paint the mural but also helped select the textures that should be associated with oranges and those that felt more like leaves. Motion sensors atop the mural shoot out bursts of citrus-scented clouds at passersby to immerse them in the whole scene.

“I think it was one of the most meaningful projects I’ve ever done,” Magid says. “I felt like it allowed my team to put our money where our mouth is. We talk about doing socially responsible art—this is exactly that sort of project.”

Though Magid feels at home in the art world now, this was not always the plan. Just a few years ago, medical school was within his sight. He graduated from the University of Miami in 2012 ready to face the Medical College Admission Test, but art and creativity were always his first loves. In college, they met again through campus activism. “I realized people just talk at each other as opposed to talking to each other,” he says. “I was brainstorming ways to get people to actually have a meaningful conversation and found the arts were a way to get people to genuinely express themselves.”

Magid’s gap year dragged on and on, and soon he knew a different path was beckoning. “I remember calling my sister and saying, ‘I’m not going to medical school,’” he says.

The look on Magid’s face as he runs his fingers across the ridges of the mockingbird mural says, loud and clear, that he made the right decision. Now he talks about art with an almost childlike curiosity. He loves watching the switch flip after putting a paintbrush in someone’s hand. Defense mechanisms vanish. Walls have a way of crumbling. He became so interested in the process that he attended Harvard University, receiving a master’s degree in education.

“I studied a lot about citizenship,” Magid says. “What does it mean to be a good citizen and a good person in general? And how do we create spaces that promote goodness, that promote this idea of being an ethical and responsible citizen?”

He founded Unconventional in 2016 hoping to answer questions like those. He has since worked on collaborative art projects with the likes of Airbnb and Susan G. Komen. Today, he sees himself as a much-needed middleman for muralists. Their work has never been in higher demand, as evidenced by the splashy streets of Wynwood and Flagler Village. But too often, Magid says, the artists end up shouldering an unreasonable amount of the process, running back and forth to Home Depot and acting as their own publicists, accountants and agents. Magid wants to cut through all that noise to help artists connect with impactful projects. He is happiest in a world where artists only have to worry about the art.

And as Magid continues to evolve and take on new projects—as he soon will with clients like Florida Atlantic University and Baptist Health South Florida—he wants his work to do one simple thing: educate.

The Art is in the Details