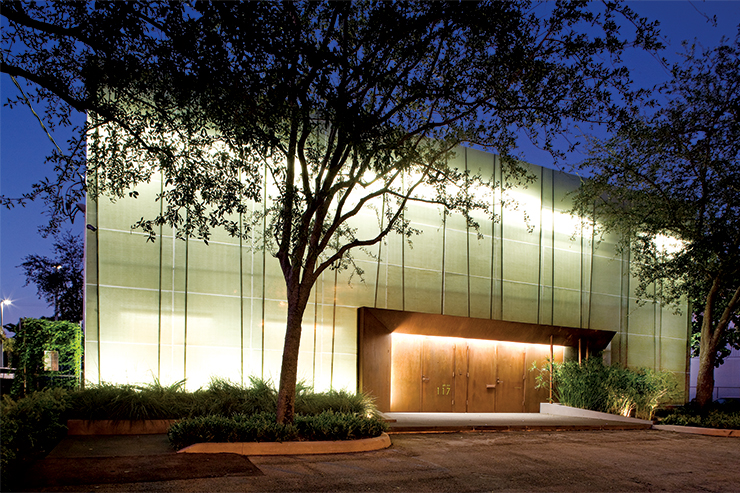 What comes to mind when someone says “women in art”? Do you think of female artists creating contemporary art? Can you think of five famous women artists? How about three?

Fort Lauderdale artist and photographer Francie Bishop Good felt frustrated the art world often only sees a woman as a nude drawn on a canvas hanging in a museum. She wanted women to have a stronger voice in art, so in 2006 Bishop Good allocated part of her downtown studio for Girls’ Club.

“I have made relationships at Girls’ Club, which does grow a sense of community,” Girls’ Club writer-in-residence Vanessa Garcia says. “It’s not just art on the walls; it’s the people making art in your city.”

In Bishop Good’s own vast art collection—more than 700 pieces—that she shares with husband, David Horvitz, women are portrayed as real and emotional. These pieces help constitute each specially curated exhibit. The name, Girls’ Club, while a response to men’s clubs, is intended to celebrate past and present female artists and encourage the next crop to embrace their creativity.

WOMEN WARRIORS: The “I Think It’s In My Head” exhibit, curated by the TM Sisters, is currently on display at Girls’ Club.

Noting that men dominated the art world in the 1960s and 1970s, Bishop Good wanted the tidal wave of change to have a platform and stage. “Less than 3 percent of the artists in The Metropolitan Museum of Art are women, but 83 percent of the nudes are female,” she says, quoting the Guerrilla Girls, a feminist organization that blasts gender discrimination in art, film and politics.

And the gender gap remains, even with the directors who influence museum’s choices. Just this March, a study by the Association of Art Museum Directors found only a quarter of museum directors are women, and female art museum directors earn 79 cents for every dollar earned by their male counterparts. And at the largest museums, female directors earn 71 cents on average for every dollar earned by male directors. The larger the museum (and the bigger the budget), the less likely it is to have a woman at the helm.

Bishop Good’s vision for an alternative art space budded while having coffee with a friend in New York City. She wanted a place close to home where local female artists could feel comfortable expressing themselves. At the same time, Bishop Good’s private collection was bursting at the seams.

With the help of creative director Michelle Weinberg and architect Margi Glavovic Nothard—who designed Young at Art Museum and ArtsPark at Young Circle—Bishop Good converted half of her private studio in a renovated warehouse into a museum and workspace for girls and women.

Girls’ Club is a private foundation that works with community organizations, such as Susan B. Anthony Recovery Center, Women in Distress, Women on the Rise! (Museum of Contemporary Art), ArtREACH (Young at Art) and PACE Center for Girls. Artists teach teens and women how to find and nurture their artistic abilities, which helps them build self-esteem, while Girls’ Club exposes them to art and culture. The association also works with other organizations in the Fort Lauderdale art community, such as Third Avenue Art District, FATVillage, Museum of Art | Fort Lauderdale and Sailboat Bend.

“Girls’ Club is interdisciplinary,” Garcia says. “I have the opportunity to work with actors, directors, writers, dancers and poets—all women.”

Girls’ Club, which is open to the public Wednesdays to Fridays, helps to enhance and amplify the skill base of artists in the community, says Dinorah de Jesús Rodriguez, multimedia artist from Miami. “It’s not easy to define. It’s not a gallery, not a museum, not an art school, yet it can function in the margins of all those spaces. It was created as a vision of something that did not exist. There is nothing like this in South Florida.”

The 2014 Artists in Action! series, in its fifth year, is an opportunity to discuss and learn about a local artist’s work, inspirations and the creative process. On May 23, de Jesús Rodriguez will be the featured artist. On June 6, the speaker will be Korean-born sketch artist Jiae Hwang. Artists in Action! talks are free and open to the public at the Girls’ Club.

Girls’ Club also offers artist development workshops taught by prominent practicing artists. “I can take a workshop and learn a new skill and technique, and it’s affordable,” says de Jesús Rodriguez, 56, who produced a film in the currently showing “I Think It’s In My Head” exhibit.

“Women come to the Artists in Action! series because it sounds interesting, but they get more out of it than they expect,” says Sofia Bastidas, 26, a former intern and host of an installation of Girls’ Club’s Artists in Action! series. “It’s perfect for the woman who thinks she is not an artist or that art is something only creative people can do. Girls’ Club welcomes ideas. It’s open to anyone—from 14-year-old girls to women in their 60s—and men too. Anyone can come and learn, and soon they realize, ‘I can be creative too.’”

Miami-born siblings Monica and Natasha “Tasha” Lopez de Victoria, known professionally as the TM Sisters, are the curators for the yearlong exhibit, “I Think It’s In My Head.”

The exhibit explores the metaphysical and celebrates that elements in each piece are just a bit “off,” Tasha Lopez de Victoria explains. “The theme shows the vulnerable things we do as humans. Artists are good at being the antennae of society and expressing those things. These are the pieces Monica and I felt express something more than what you see. They keep the mind questioning: ‘Is it in my head?’”

“It’s not easy to define. It’s not a gallery, not a museum, not an art school, yet it can function in the margins of all those spaces. It was created as a vision of something that did not exist.”

The exhibit’s title comes from a neon sculpture by British artist Tracey Emin. South Florida artists include Harumi Abe, Jen Stark, Samantha Salzinger and others. “I’ve been impressed with things happening artistically in Broward venues,” Tasha says. “There are lots of Broward artists in the exhibit, selected based on merit, not on an obligation to represent Broward.”

There is an advisory board—which includes Bernice Steinbaum, former Miami gallery owner, and Bonnie Clearwater, director of the Museum of Art | Fort Lauderdale—but no board of directors dictating what Girls’ Club is allowed or not allowed to do.

“I Think It’s In My Head” runs through Sept. 26 and features 50 artworks. “Exhibits stay for a year, which gives the community a chance to live with the art and let it marinate.”

Originally appeared in the Spring 2014 issue.