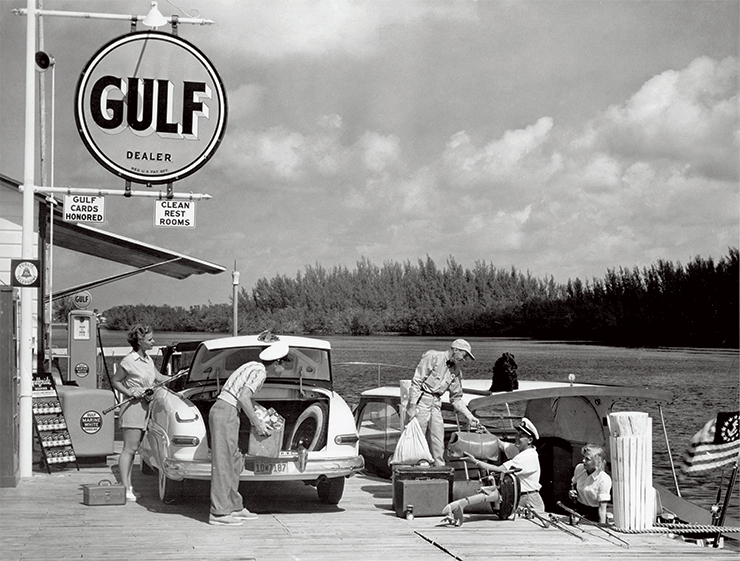 Few South Florida landmarks have endured as long as the Lauderdale Marina. Easy to spot on the western banks of the waterway,  it virtually is impossible to travel south on the Intracoastal without passing this prominent waterfront property, lined with nautical-themed buildings and massive mega-yachts moored at its slips. Day and night, folks of all ages gather to feed the giant tarpon fish that live below the docks.

Founded in 1948 by Bob Cox, who later served two terms as Fort Lauderdale mayor, Lauderdale Marina has become a focal point in the city’s short history. The numerous thriving businesses at the marina still are primarily owned and operated by members of the Cox family, with several having become landmarks in their own rights, such as Boston Whaler dealership, Drum Realty and 15th Street Fisheries restaurant.

The famous fuel dock and dock store have been serving boaters for the past 65 years. This is the point of entry for many who come to the marina, just as it was all those years ago. Out for a day on the water? Well, you’ll likely fill up at Lauderdale Marina.

The historic photo presented here is from 1949 and was photographed for a Gulf Oil promotional piece staged on the marina’s fuel dock overlooking Harbor Beach across the waterway. Gulf Oil hired J. Walter Thompson, a New York advertising agency, to photograph Lauderdale Marina for a promotional brochure produced that year. The marina was Gulf Oil’s top marine fuel account in South Florida. This image epitomizes that bygone era, yet Lauderdale Marina still exudes the same Old Florida nautical charm it has for the past six and a half decades. It’s a living piece of Fort Lauderdale history.

Originally appeared in the Spring 2014 issue.