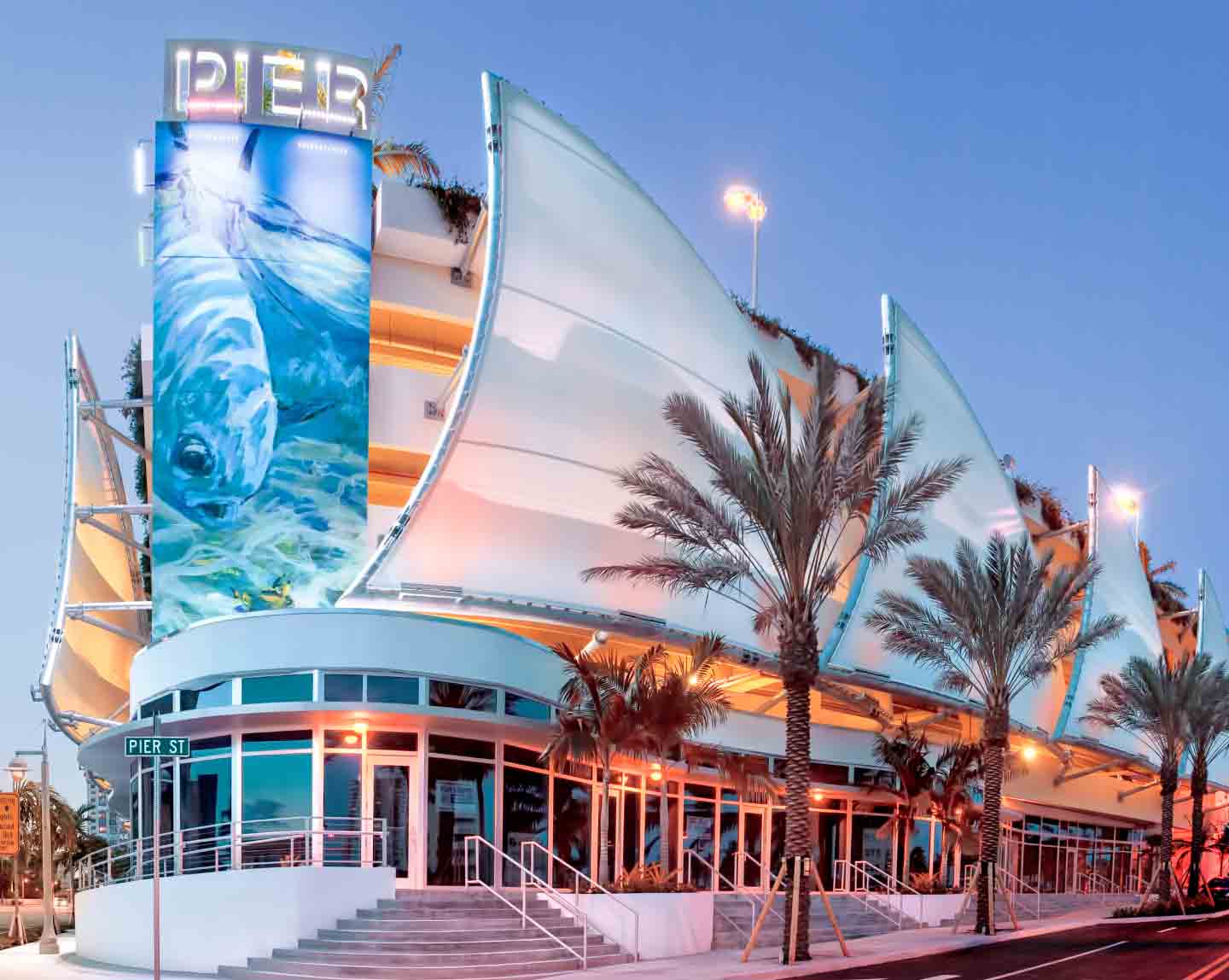 Every afternoon, after checking in guests at her five lodging properties in Pompano Beach, Elaine Fitzgerald goes for a walk. The former news anchor and public relations executive turned owner of Beach Vacation Rentals strolls through the heart of the city. She watches visitors from around the world admire the pier with its amber-lit arch; she passes by the ship’s hull-shaped exterior of Oceanic restaurant, and she takes in the music escaping from Lucky Fish bar into the fresh ocean air.

After living in Pompano Beach for over two decades, Fitzgerald describes her home with pride. “What people see now is really the tip of the iceberg,” she says, referencing the Atlantic Boulevard Bridge adorned with sails and a maritime mural that drivers pass on their way to the city’s barrier island location, complete with a parking garage—considered by some to be a work of art in and of itself—decked out with its own mural of a sea turtle. “They’ve made the beach area wonderful, and now they’re making the rest of the city wonderful.”

The second-oldest city in Broward County, back in the day, Pompano Beach was known for drawing A-list celebrities, including Elizabeth Taylor, Frank Sinatra, Jerry Lewis and Jackie Gleason, to its historic Palm-Aire resort. But for decades, the city’s leadership was not keen on tourism or redevelopment. Beachfront condominiums blocked plans for public parking and restaurants, and the city became pockmarked with vacant lots and run-down duplexes. The 2006 edition of Florida Beaches called it “Fort Lauderdale’s red-headed stepchild that lacks the brain, class and charisma of the neighboring city.” 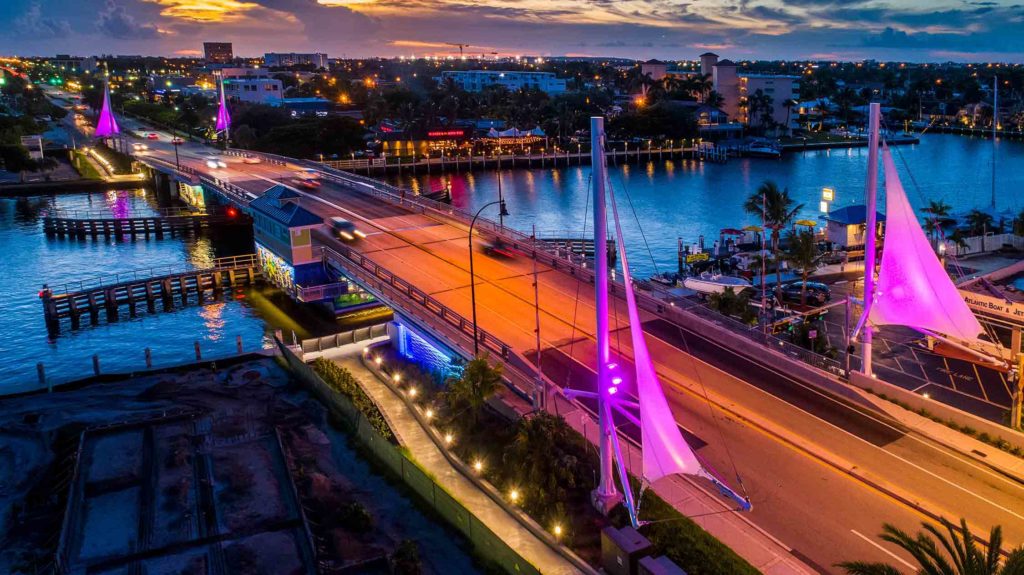 Completed in June 2019, the redesigned Atlantic Boulevard Bridge over the Intracoastal Waterway, with its large tensioned sails at each end and computerized uplighting, along with a landscaped esplanade, welcomes motorists, pedestrians and boaters to Pompano Beach.

But if you drive down Atlantic Boulevard today, you might notice the city seems to be ridding itself of its growing pains—or, quite literally, growing out of them. A wave of new developments has hit its shores. Envy Pompano Beach offers luxurious apartments on the marina; developer Dev Motwani built the beachfront Broadstone Oceanside apartments (now known as 1333 South Ocean); the dual-branded Home2 Suites/Tru by Hilton hotel opens this summer, and the city estimates $1 billion in development investments will be made within the next 15 years.

That number includes the Related Group’s upcoming Solemar, a luxe condominium slated to open in 2023 just south of the Fort Lauderdale Marriott Pompano Beach Resort & Spa. The Florida real estate behemoth acquired the 3-acre oceanfront lot 10 years ago. “We were really waiting for the right time to launch,” says Related Group vice president Nicholas Perez. “I think Pompano as a city has elevated its status from sleeper to up-and-coming to now almost established in real estate on the South Florida coast.” 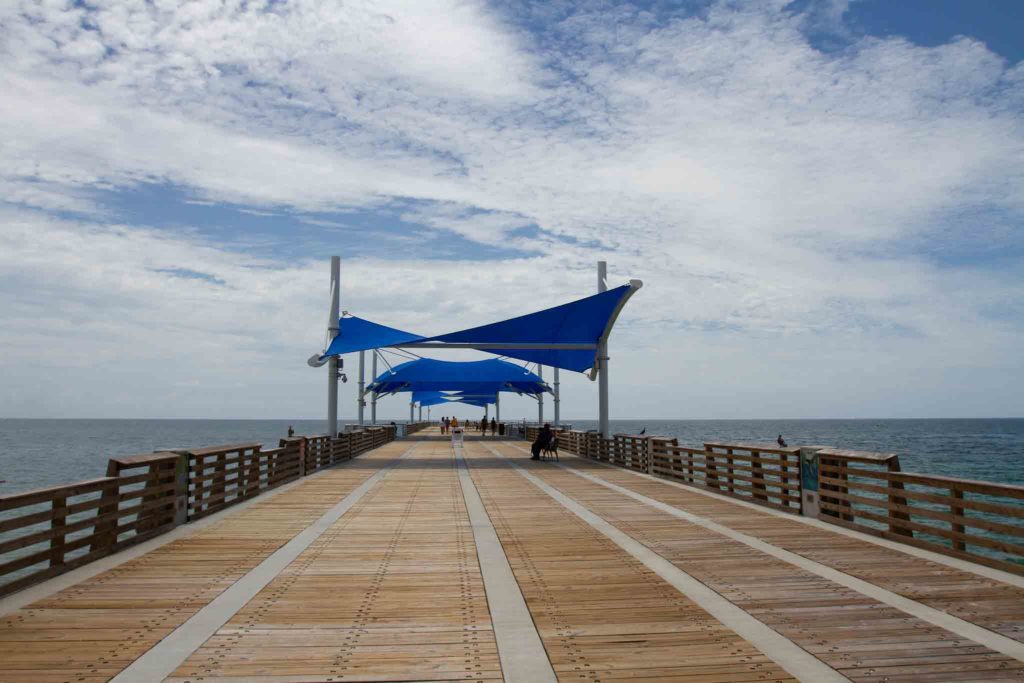 The Fisher Family Pier, named after the city’s former mayor Lamar Fisher, features the shape of a pompano fish at its eastern end.

But it’s not just luxury high-rises that are driving Pompano Beach’s growth. The successful rebuild of the pier, which was unveiled in May 2020, attracted businesses and restaurants, like the ice cream and chocolate confectionery Kilwins and the aforementioned Oceanic and Lucky Fish. With a portfolio of restaurants in New York and one tucked inside the former Versace Mansion in Miami Beach, Simple Venue CEO Michael Sinensky turned not to Fort Lauderdale or West Palm Beach but to Pompano for his next venture, Sushi by Bou Beach Club. “Florida is booming, and Pompano is no different,” Sinensky says. “We can see the neighborhood is really elevated.”

Named for Sinensky’s acclaimed culinary partner and Boca Raton native, chef David Bouhadana, the omakase sushi restaurant opened in May at the beachfront Marriott Residence Inn. Sinensky says he had an array of location options for this latest iteration of Sushi by Bou, where diners are treated to meals entirely steered by the chef, with seafood flown in from around the world. He chose to once again partner with Hank Freid, who owns Pompano’s Marriott Residence Inn as well as the Sanctuary Hotel in New York, which is home to Sinensky’s Sushi by Bou speak-easy concept. “We had options all over Florida, and we plan on expanding more, but we wanted to do something with the Freids again,” Sinensky says. “We also like how the area has blossomed so much. We’re trying to put Pompano on the map again.” 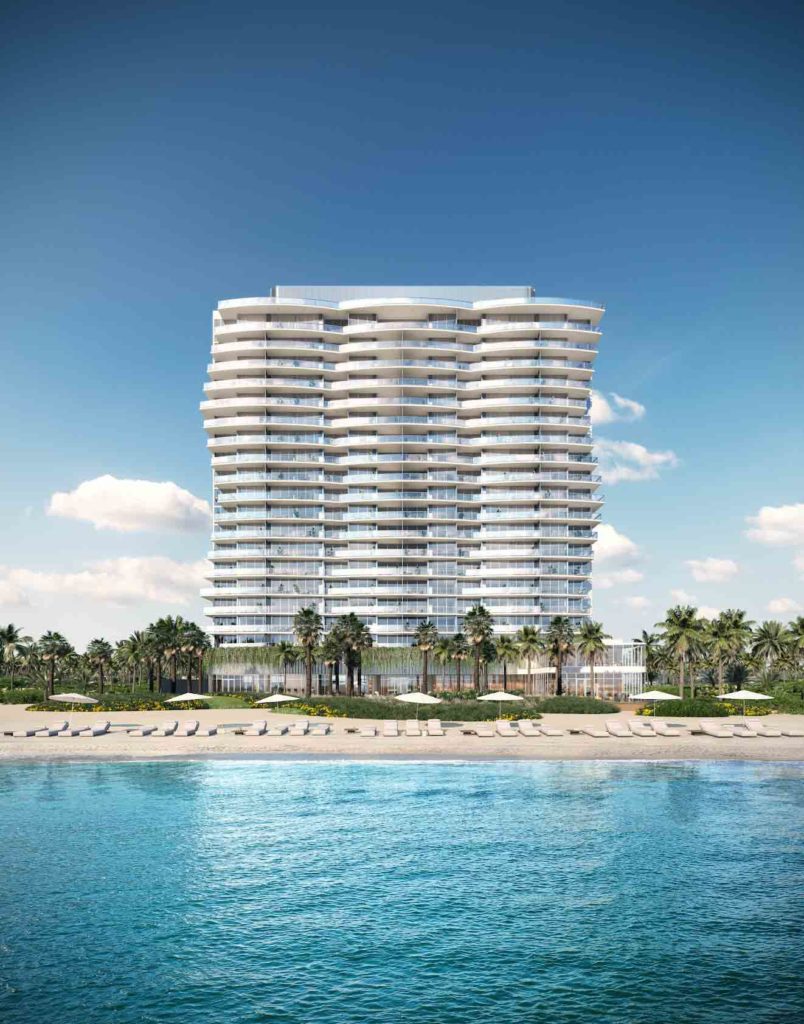 That was a goal Fitzgerald shared when she moved to Pompano Beach. Newly single 25 years ago, she set her sights east and discovered a new business venture: real estate. “Twenty years ago, there was an awful lot of blight and slum in the beach area,” she says. “It’s still not there yet, but it’s improved so much, and I thought I couldn’t go wrong if I bought distressed properties in great locations in the heart of the beach area and turned them into places for tourists and business travelers.”

As Fitzgerald purchased and flipped older properties, she watched the neighborhood grow more manicured. So invested in her new home, she joined the city’s Economic Development Council. During the recession, the committee and city commission agreed to end the decadeslong redevelopment stalemate and put money into the beachside community. “We recognized 12 years ago that absolutely nothing had been done to improve the city,” she says. “The city had stagnated. After decades and decades of city administrators who didn’t spend anything on the city, its infrastructure was falling apart; it was miserable.”

Vibrant landmarks have fast become the norm at Pompano Beach, thanks in part to an active cultural center and public arts committee. Here: Old Town, a 98-foot-wide mural by Carlos Gonzalez.

Karen Reinstatler-Rauch, the proprietor of Pink Slip Threads, a mobile boutique inside a retro camper, is a regular at art walks and fairs like Untapped. “Breweries started popping up, and we decided to support them,” says the 20-year Pompano Beach resident, who has fond memories of buying her first house with her husband in the city and opening their businesses there. “Untapped really, in the beginning, was ‘untap your potential.’” Restaurateur Brian “El Jefe” Faeth also sees a lot of potential in Pompano Beach. He opened his “Mexi-Crasian” food truck, Papamigos, in what will become The Backyard, a dining and pedestrian plaza, and he has a brick-and-mortar version of the eatery in the works.

While Pompano Beach residents voted in 2018 in favor of borrowing up to $181 million in bonds for projects and improvements, what the city does not plan to do is raze its history. Last year, the city moved the 1926 McNab House, which was originally owned by Pompano Beach pioneer Robert McNab and is one of the oldest houses in the city, to McNab Park. The plan is to transform the home into a restaurant surrounded by a botanical garden.

“The house is coming back home,” says Nguyen Tran, the director of Pompano Beach’s Community Redevelopment Agency (CRA). “It was an opportunity to reuse and preserve it but also put it in a setting where we know it’s going to be an economic development project.” Similarly, in Old Town, the city also saved the dilapidated Bailey Hotel. Built in 1932, it subsequently fell into disrepair, but the CRA stepped in and restored the property, which now hosts artists in residence, art shows, workshops and events in the center of the emerging Creative Arts District in Downtown Pompano Beach.

“Pompano still has its own identity,” Fitzgerald says. “We don’t want to be a Fort Lauderdale or a Miami or a Boca. We want to retain some of the maritime charm—and we want nice amenities that residents and visitors alike can enjoy.”