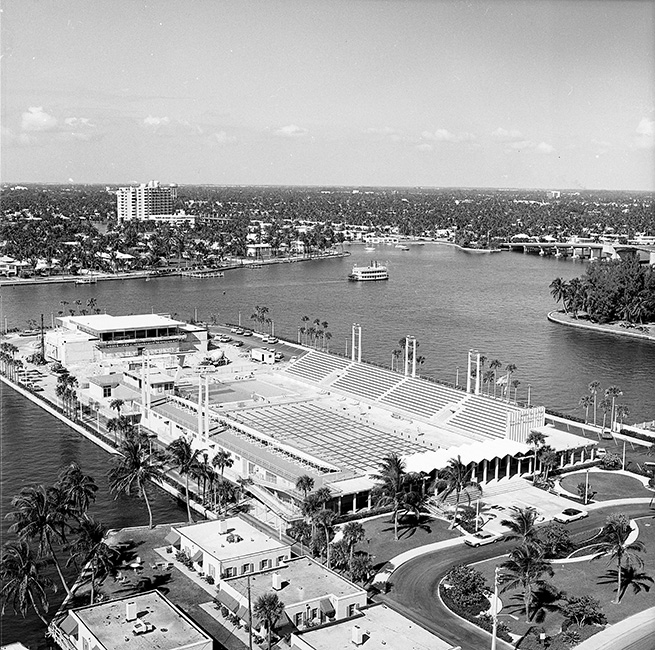 Once upon a time, Fort Lauderdale was a sleepy beach town off the radar of big screen stars and tourists—that is, until the 1960 movie “Where the Boys Are” inspired a spring break frenzy.

Local teenager Frank Walker heard about the call for extras in the Fort Lauderdale News that offered $5 and lunch. The 15-year-old and his friends headed to the beach and piled into a cherry red Chevy convertible with sharp fins, driving around the block over and over to get the perfect shot of raucous coeds up to no good. While they didn’t end up getting their $5 and lunch, Walker earned a wicked sunburn and bragging rights for his part in a cultural phenomenon.

“The next spring break, 200,000 students came down; (the movie) is what kickstarted it,” says Walker, now an attorney.

But what also drew students to Fort Lauderdale was swimming. Opened in 1928, the city’s Casino Pool hosted collegiate teams from around the country. Swimmers told their friends back home how much fun they had down south, and they’d all return during their week off in the spring. Girls broke societal rules and wore risqué swimwear, showing off sun-kissed legs and bronzed shoulders.

Swimming had such a hold on American sports that cities fought to be the home of the International Swimming Hall of Fame, with Fort Lauderdale beating out Houston and Louisville, Kentucky. At the 1965 ribbon-cutting, celebrities in attendance included Duke Kahanamoku (known as the father of modern surfing), Jackie Gleason, Ted Williams, Eleanor Holm, Buster Crabbe, Esther Williams and Johnny Weissmuller, an Olympic swimmer and the star of “Tarzan.” Gold medalist Donna de Varona was pulled in on a surfboard, a crown atop her head.

“These were some of the most glamorous, revered people in the United States,” says Bruce Wigo, a historian and the former president and CEO of the International Swimming Hall of Fame. “It drew tremendous publicity to Fort Lauderdale.”

The hall of fame is chock-full of swimming memorabilia—props from the “Tarzan” films Weissmuller starred in, the flag from the 1920 Olympics, more than 20 Olympic medals, a relief of Assyrian swimmers from the 800s B.C., underwater photos of the Titanic and more. Most importantly, it chronicles the history of swimming.

Over time, the pool, plumbing and museum deteriorated. Soon, it could no longer host marquee events, and the public lost interest. There was even talk of moving the hall of fame to California in 2015, when its 50-year lease with the city of Fort Lauderdale expired. Thankfully, it stayed local and leadership rejuvenated efforts to bring back the glory days of swimming by pouring $137 million into the complex. When it reopens in September 2022, visitors will find new swimming pools, an open-air amenity deck, locker rooms, a grandstand and bleachers, an updated museum, a new restaurant and a 27-meter dive tower. “When you think about what swimming has done and what swimming culture has done—and across a broad range of warfare, fashion, race relations—it’s incredible,” Wigo says.

If The Spirit Moves You

Bahia Mar: A Storied Past

In Retrospect: Bahia Mar’s Storied Past