In the competitive, swashbuckling world of professional high-end kitchens, you can often tell a lot about the chefs by their tattoos. They wear their hearts on their sleeves with talismans collected from years perfecting their passions on the line. Chef Jen Knox, the culinary visionary behind Delray Beach’s latest luxe eatery, Warren, American Whiskey Kitchen, is no exception. Perched on a fierce skull, a badass lady commandeers her right arm—a little gift she gave herself after earning her first leadership position in the kitchen. The ink on her left forearm is dedicated to the flavors of her trade: a crab, a plump pig and a chicken decked out in colorful plumes. And tucked near her elbow is a cherry red Sour Patch Kid—her tongue-in-cheek miniature mascot, “because at first I’m sour, and then I’m sweet,” she says.

This same nostalgic, playful spirit appropriately describes her work at Warren. This is her latest project as the director of culinary operations for the Fort Lauderdale-based Damn Good Hospitality Group, the outfit behind popular local spots like Revolution Live, Backyard, Stache Drinking Den, and Green Bar & Kitchen. Inspired by owner Jeff John’s memory of his beloved Uncle Warren, the group’s newest, most ambitious restaurant offers a sentimental nod to his uncle’s favorite things: fine whiskey (of which the restaurant boasts over 900 varieties) and bountiful, delicious meals ideal for sharing among family and friends.

Knox follows suit with dishes that offer her signature twist on contemporary American cuisine. There’s the mischievously dubbed KFC—with the K standing for the Korean gochujang sauce that spices up the fried chicken. There’s cozy, creamy risotto made more complex with nutty farro. Of course, the menu doesn’t neglect steakhouse staples such as rib-eye and New York strip. But Knox executes her versions with obsessive care, using Carrara wagyu beef sourced from A Cut Above Butcher & Provisions in Fort Lauderdale. Extra love (and labor) is given to each cut, like the prime short rib—which goes through a two-day braising and smoking process. And there are plenty of lush bourbon glazes, tapping into the restaurant’s envious library of booze curated by John and his business partner, celebrated mixologist Brian Freed. (Not sure what to sip? Warren’s in-house “spiritual adviser” John “Fitzy” Fitzpatrick has you covered.) 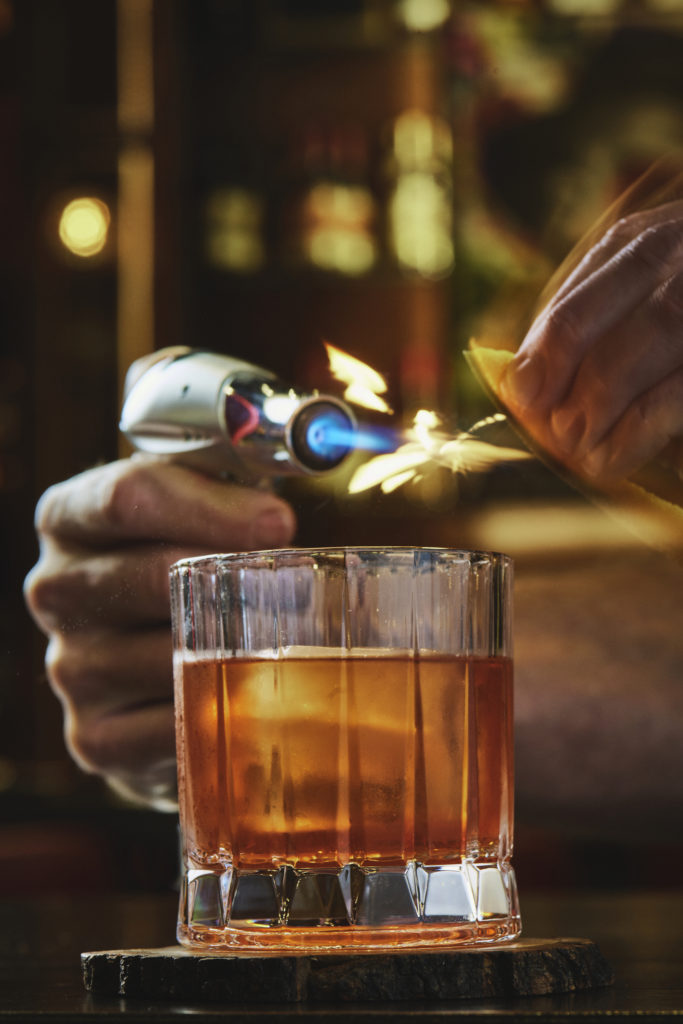 Warren’s seemingly endless whiskey library features some of the rarest pours, from Macallan 50, Double Eagle Very Rare and Michter’s Celebration to the entire line of Last Drop and all vintages of Pappy Van Winkle.

“It’s amazing how you can take something and over time with love make it so delicious and tender,” says Knox of the work-intensive process often required for these specialties. “It’s about making sure that when you do have something that’s the best, you’re giving it the love it deserves.”

The furnishings at Warren are dressed in rich worn chocolate leathers accented by lush velvet seating and curtains. Wood flooring grounds the dimly lit space, drawing the eyes to the restaurant’s focal point: an Old World whiskey wall with a modern touch.

This approach overall reflects Knox’s philosophy about good food: that luxury doesn’t require affectation, but rather thoughtfulness. For her, flavor always comes first. “I’m big on marrying all the senses,” the chef says. “I want to make sure you hit the umami, and you have that acid and you have that heat along with the sweet.” And don’t expect the high-tech spherification and foam of molecular gastronomy in her cuisine, either. “I don’t try to be fluffy or reinvent the wheel,” Knox says. “I think my approach is unpretentious and obtainable but technically driven and seasoned well. And I like comfort. If you can eat something and it reminds you of a memory, I think that hits home more than anything else that looks fancy.”

This culinary sensibility mirrors her own early food memories from growing up in Chicago. Her childhood was filled with the city’s iconic deep-dish pizzas and family dinners of meatloaf and goulash. “It’s a meat and potato kind of place,” Knox says of her hometown. At first, cooking was just a hobby, something she did as a way to decompress. “It was like a sense of therapy for me,” she says. “I would find myself in the grocery store, going up and down the aisles for hours.” After inevitably making too much food, she would give away meals to friends, who would cajole her to pursue cooking seriously by enrolling in culinary school. When her friends’ advice finally felt right, she hopped on a plane to enroll at Le Cordon Bleu in Scottsdale, Arizona.

After graduation, she further honed her skills, first working for The Walt Disney Co., then cutting her teeth at Ritz Carlton hotels, cooking with chef Sean Woods in Orlando and chef George Fistrovich in Naples. She credits this period of her career for shaping the kind of leader she wants to be in the kitchen. “They were two amazing mentors for me who really molded the way I approached the professionalism of the brigade,” Knox says. “You saw the passion in them, and it just transferred into you.”

These leadership skills are paying off for Knox. Beyond all the care invested in the food and the ambiance, so much of a restaurant’s spirit is ultimately shaped by the people who fill it. Luckily, despite opening when most people were not dining in due to the pandemic, Warren quickly found its footing among locals as part of the burgeoning nightlife forming in West Delray Beach. “We have a big following of repeat clientele coming in,” Knox says. And to her great pleasure, it’s becoming the kind of place where everyone knows your name—literally so, as the chef loves coming out into the dining area to greet the many familiar faces that pop up week to week. “You feel like you’re part of something,” she says. “It’s great that the community has really received us well, and they’ve taken to us as a second home.”