Bratislava is the quintessential fusion of the Old World with the New World. The capital of Slovakia, Bratislava’s structural pieces from centuries ago remain a part of who it is today – from the cobblestone pathways to medieval towers. But during my recent trip to this regal European city, I saw a centuries-old city embracing its modern identity.

Located on banks of the famous river Danube – which anyone who has ever taken piano lessons as a child is familiar with, thanks to composer Johann Strauss II – Bratislava is best appreciated after learning more of its history. For the past millennium, Slovakia was largely under the influence of Austria and Germany. It was even the capital of Hungary for two centuries, where it stood as the backdrop for 11 royal coronations. When the Turks slowly started to spread their borders westward, Slovakia also got swept under that tutelage. Much tugging and pulling occurred in the 19th and 20th centuries, including from the Nazis, and then there was Czechoslovakia, the disillusionment of Czechoslovakia, Communist rule and then full independence in 1993.

All this to say that Slovakia has hardly had its own identity until recently. Once largely influenced by other nations, Slovakia is now emerging as its own unique powerhouse in Eastern Europe. And it’s only appropriate that its capital, Bratislava, with its 500,000-some residents, is leading the charge. Today, it is home to some of Eastern Europe’s finest contemporary museums. Some highlights include Galeria Arden, which houses some of the country’s best graphic works, as well as Galeria Nova, home to some of the finest glass pieces that the tiny country has produced.

Perhaps the greatest example of the country’s convergence of its rich history with its modern style is the Grand Hotel River Park, the Bratislava’s only five-star deluxe hotel. On the Danube, the 11-story hotel is visible to anyone coming to Bratislava by boat or from the south. Designed by award-winning Dutch architect Erick van Egeraat, Grand Hotel River Park is an art-filled modern hotel that’s in the heart of a thriving business district.

A fascinating combination of glass, metal and wood, the hotel is an entryway into the glamour and style that Bratislava is looking to give travelers. Designed by the Slovak designer Zuzana Cambelová, Grand Hotel River Park’s modern interior features Italian furniture and black marble, rosewood flooring and velvet. Another great touch is the rose symbol – considered the beloved flower of the country’s 18th-century monarch, Maria Theresia – which can be spotted through the hotel’s public areas and its luxury spa.

The Grand Hotel River Park’s Zion Spa Luxury stretches across 16,000 square feet. Floor-to-ceiling windows offer an impressive view over the city, the Danube and the surrounding landscape. The wellness area features an indoor pool, a relaxation pool, a Jacuzzi with hydrotherapy options, aroma steam bath, sauna, and an ice fountain and shower. 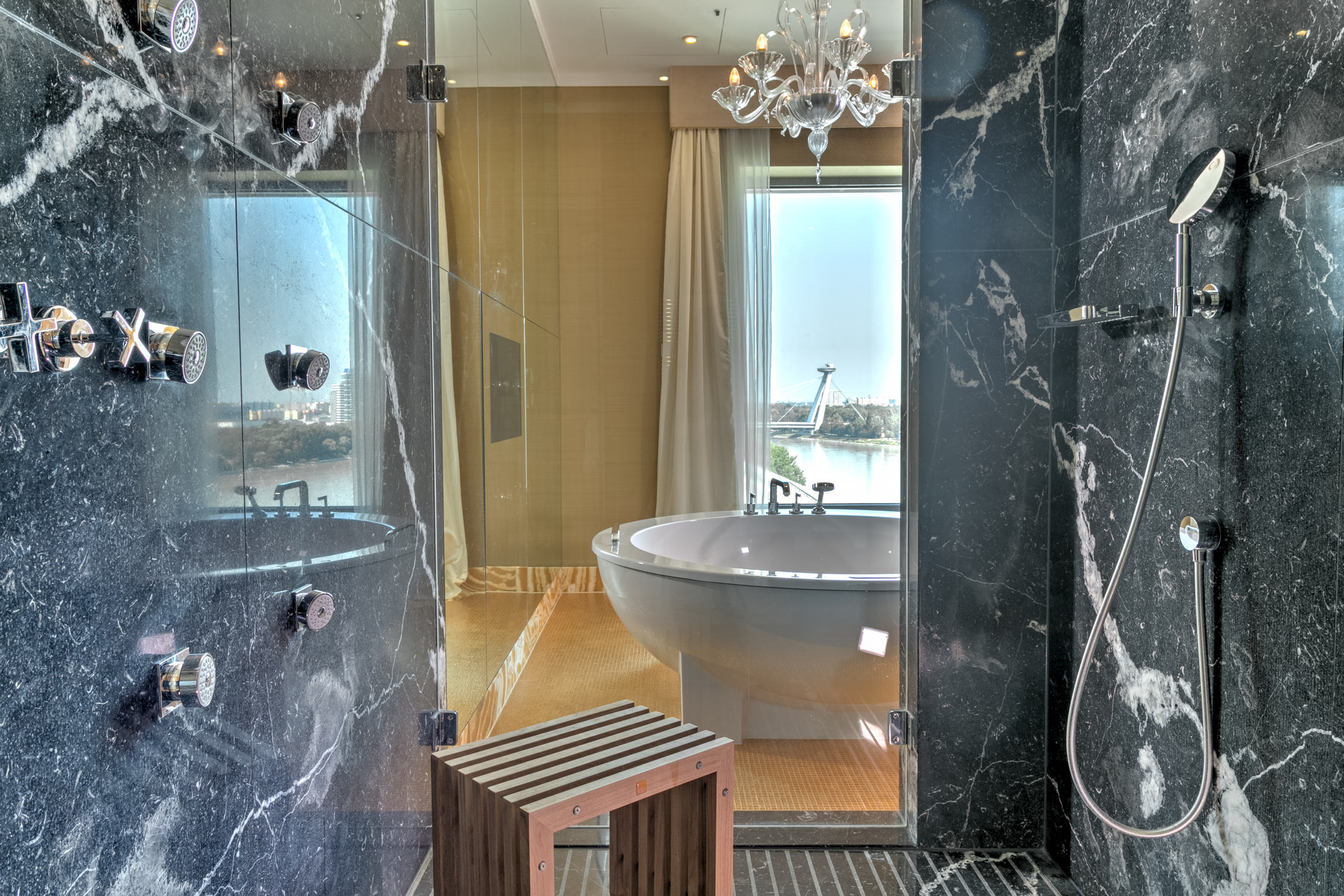 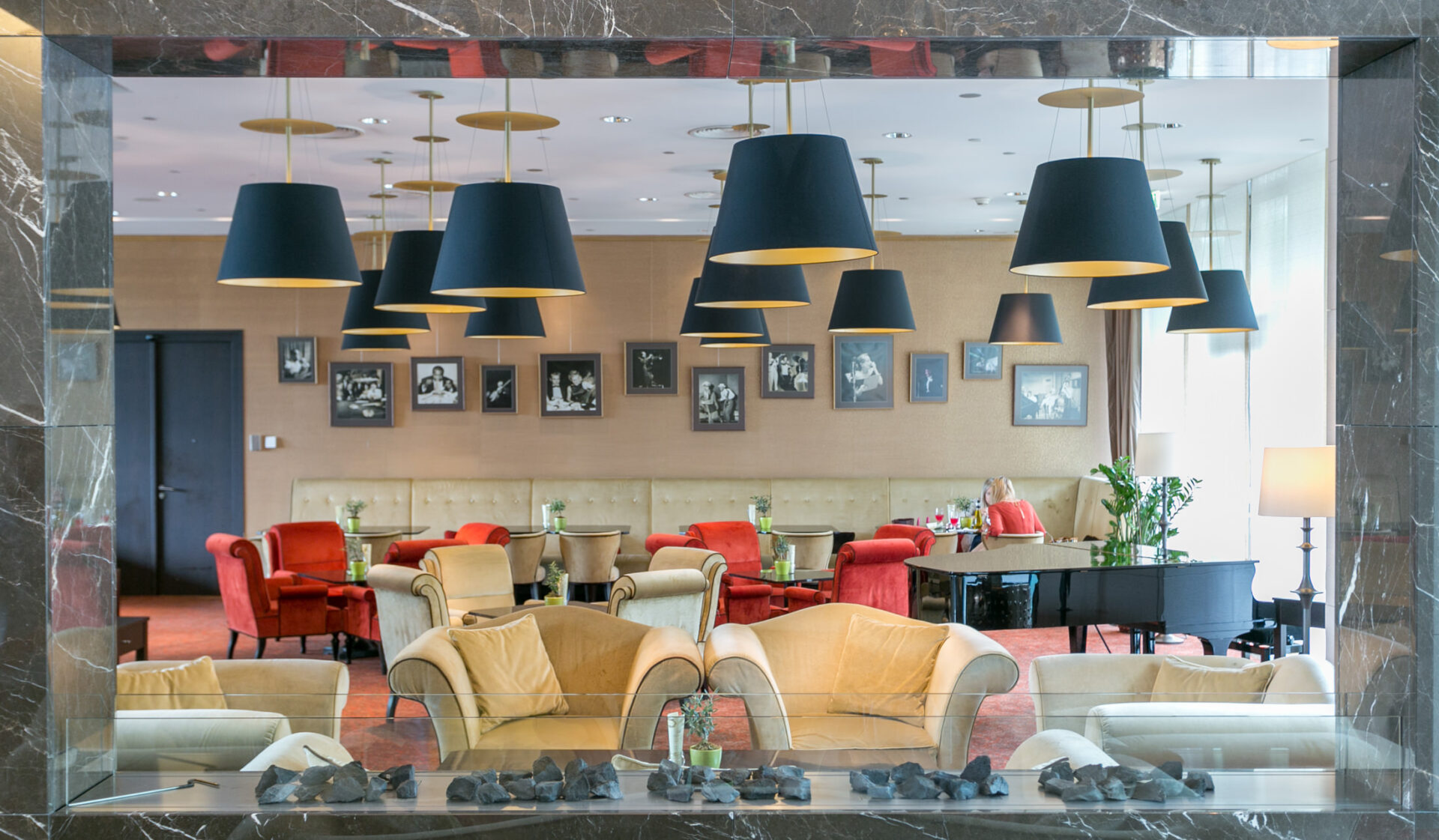 The hotel’s lounge features vibrant interiors with an open fireplace, an adjoining terrace, a stylish bar and its very own wine cellar with a selection of wines and champagnes from around the world.