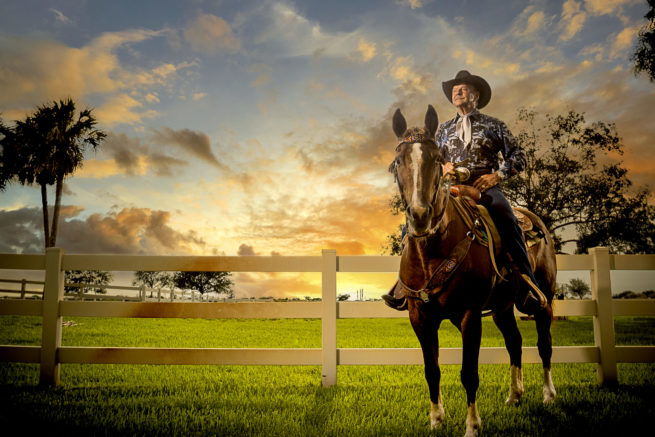 In early June, Gov. Ron DeSantis held an outdoor event in South Florida of a kind that you would not see in any other state. DeSantis, sweating in a blue blazer and an open-collar shirt, announced the kickoff of the strangest state-sponsored competition in the nation: the roundup of Burmese pythons in the Everglades, with a $10,000 grand prize. Then he posed for a photo holding—very gingerly, with just his fingertips—one of the large snakes. Standing just to the right of the state’s chief executive, gripping the muscular snake with a lot more enthusiasm, was a mustachioed man of 77 wearing a cowboy hat, a neckerchief and a shiny belt buckle the size of a hubcap. That man’s name is Ronald “Alligator Ron” Bergeron, and he can get away with dressing up like an old-fashioned rodeo champ because he is one. In fact, the rodeo arena in his hometown of Davie bears his family name. “I dress as my culture,” he says. “I always dress as a cowboy because I am a cowboy.” Bergeron is so comfortable handling a python because for years he’s hunted them in the wild, usually armed with nothing but a machete. “Normally I grab ’em with my bare hands,” he says. “That’s how a real man does it.” 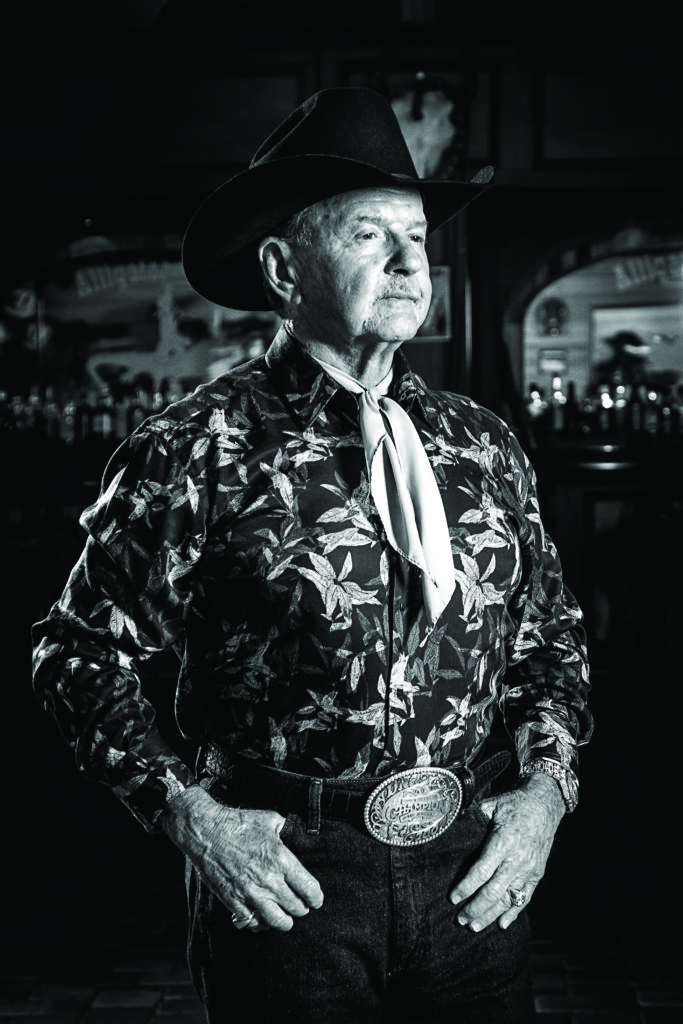 “Cowboys have always been my heroes. As I grew up, that was one of the things I wanted to pursue.” — Ron Bergeron

Bergeron is more than just a rodeo roper and occasional python hunter. He’s an expert airboat driver, an Everglades advocate, a cattle rancher, a saloon owner, a turkey hunter, an avid frog gigger, a road builder, a developer and a self-made millionaire with powerful friends. If his name rings a bell, it may be because of his years of public service. He served as a state wildlife commissioner—after being investigated by the Florida Fish and Wildlife Conservation Commission for allegedly molesting an alligator. While a commissioner, he helped create the state’s semiregular python hunt, argued against reducing protections for the Florida panther and led the fight against holding a regular bear hunt.

He frequently clashed with a fellow rancher, Liesa Priddy of Immokalee, but she says she appreciated his passion—and his clever way of dressing so that people will listen to what he says. “He wants to make a statement and get people’s attention, and that’s a great way to do it,” Priddy says. Nick Wiley, the commission’s former executive director, says Bergeron was actually fun to work with. “He so fits into that ‘only in Florida’ shtick,” says Wiley, now chief operating officer of Ducks Unlimited. “He lives it.” Bergeron is now a member of the South Florida Water Management District governing board, part of the group DeSantis appointed wholesale after ousting the entire board for being too eager to please Big Sugar. He briefly toyed with the idea of running for governor in 2018, joking that if he won, “they’re going to have to put a hitchin’ post at the governor’s mansion.” Ultimately he and life partner, Ali “Alligator Ali” Waldman, an attorney, decided he should, for once, just sit something out. Meanwhile, in Bergeron’s spare time, he’s building a museum. Bergeron was not born a cowboy—or a millionaire, for that matter. His father ran a small grocery in Davie and his mother worked as a waitress. Back then the land around Davie was cattle country. Bergeron remembers that when he was growing up in the 1940s and ’50s, outside his dad’s store were more places to tie up horses than to park cars. His family’s major source of entertainment back then involved going to the rodeo arena to watch local cowpokes show off their riding and roping skills. “Cowboys have always been my heroes,” Bergeron says. “As I grew up, that was one of the things I wanted to pursue.” Bergeron also remembers going to high school with ranchers’ kids who drove fancy cars because their families had money. As a teenager, Bergeron left home with about $230 in his pocket, took a job working at a gas station, slept on a cot in a back room and washed up in the restroom sink. Bergeron’s luck turned when his former scoutmaster found him at the gas station and offered him a better gig: caring for a coconut plantation where he could have free room and board. Soon he was cutting hay for the plantation’s neighbors and harvesting their fruit, too. He’d put in 18 to 20 hours of hard work, then crawl underneath his tractor to sleep until sunup.

In 1965 he launched Bergeron Land Development and started investing his profits in land. He landed his biggest job because a landowner who was interested in horses noticed his rodeo champ belt buckle. That’s how he wound up building much of Pembroke Pines, including the 300-acre industrial park that carries his name. Meanwhile he went from building driveways to building expressways. But that’s not how he wants to be remembered. 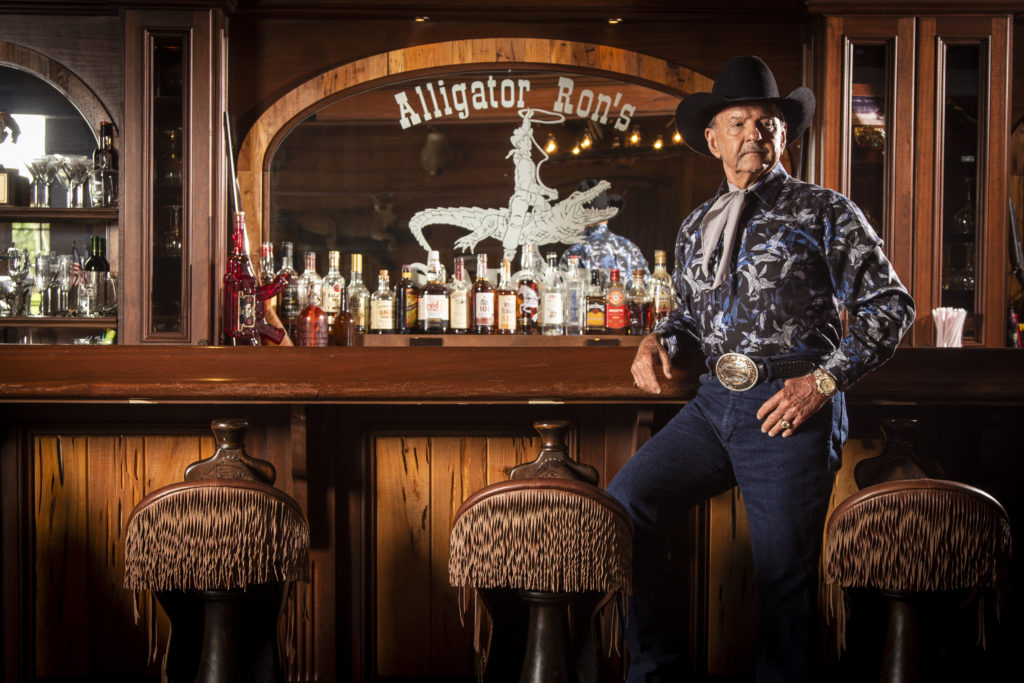 Established in 2009 on Bergeron’s private ranch, Alligator Ron’s Saloon was built to share the culture and identity of Old Florida while hosting charity events that support the community.

Call up Bergeron’s office in Fort Lauderdale and the hold music features country star Tanya Tucker singing a song called “Alligator Man.” It’s about Bergeron. “Wrestling alligators is his fame … He’s the leader of our clan,” she wails. “He’s the Alligator Man.”The song harks back to the 2006 incident that gave him his nickname. Bergeron was leading a tour of his 8,000-acre Hendry County ranch when he spotted a 7-foot alligator sunning itself. Bergeron “demonstrated what he called ‘an old cracker tradition’ to his guests” and “began to wrestle with the alligator,” a wildlife commission investigator wrote. The gator wrapped its tail around Bergeron’s leg, rolled him into a nearby pond, then bit his left hand “and proceeded to take him to the bottom of the pond,” the investigator wrote. “Bergeron stated he began to strike the alligator on the nose as he was taught as a boy, several times.”When the gator let go, Bergeron swam to the surface and went to a hospital to get his fingers stitched up. Although he told the investigator the whole story, Hendry County prosecutors opted not to charge him. While his fingers were still bandaged, Bergeron attended an event at the White House and met then-President George W. Bush. When the president asked what caused his injury, Bergeron told him, “I was rassling an alligator.”“You’re kidding, right?” the president asked. Bergeron delights in telling such stories. On his first date with Alligator Ali, he took her frog gigging and with no warning, dove into the water to pull out a gator to show off for her. Her response: “Don’t you dare do that again—until you teach me to drive the airboat!”

He boasts about being a Gladesman—someone who knows his way around the famous River of Grass and is attuned to its nature and wildlife. His interest dates back to the time when he was 3 years old and his grandfather, a game warden named Lonnie P. Harvey, took him on an airboat ride into the Everglades. Now when big-name politicos want a glimpse of the Glades, no matter what party they’re affiliated with, Bergeron usually pilots the airboat and acts as a tour guide. He has 50 or so camera traps galore set out on his Green Glades West ranch to capture photos of all the wildlife that use the property. He employs his own scientists to check the health of the landscape and document the native orchids and other flora and fauna. He plans on using all of that as part of the Everglades museum he’s planning for his ranch. Panthers—he saw his first one at age 11 when he was a Boy Scout—are sure to be a major display. Not long ago, Bergeron says, he was out hunting on his land, doing a very convincing imitation of a turkey call, when he realized a panther had crept to within a few feet of him. Bergeron didn’t panic. He doffed his camouflage coat and stood up, trying to make himself appear larger, he says, and then he started talking to the panther. And what does one say to the official state animal? “I told him, ‘I’m Alligator Ron!’” Bergeron says. “I said, ‘I’m the guy who’s trying to save your home!’” The panther just looked at him, Bergeron says, and then it strolled away.