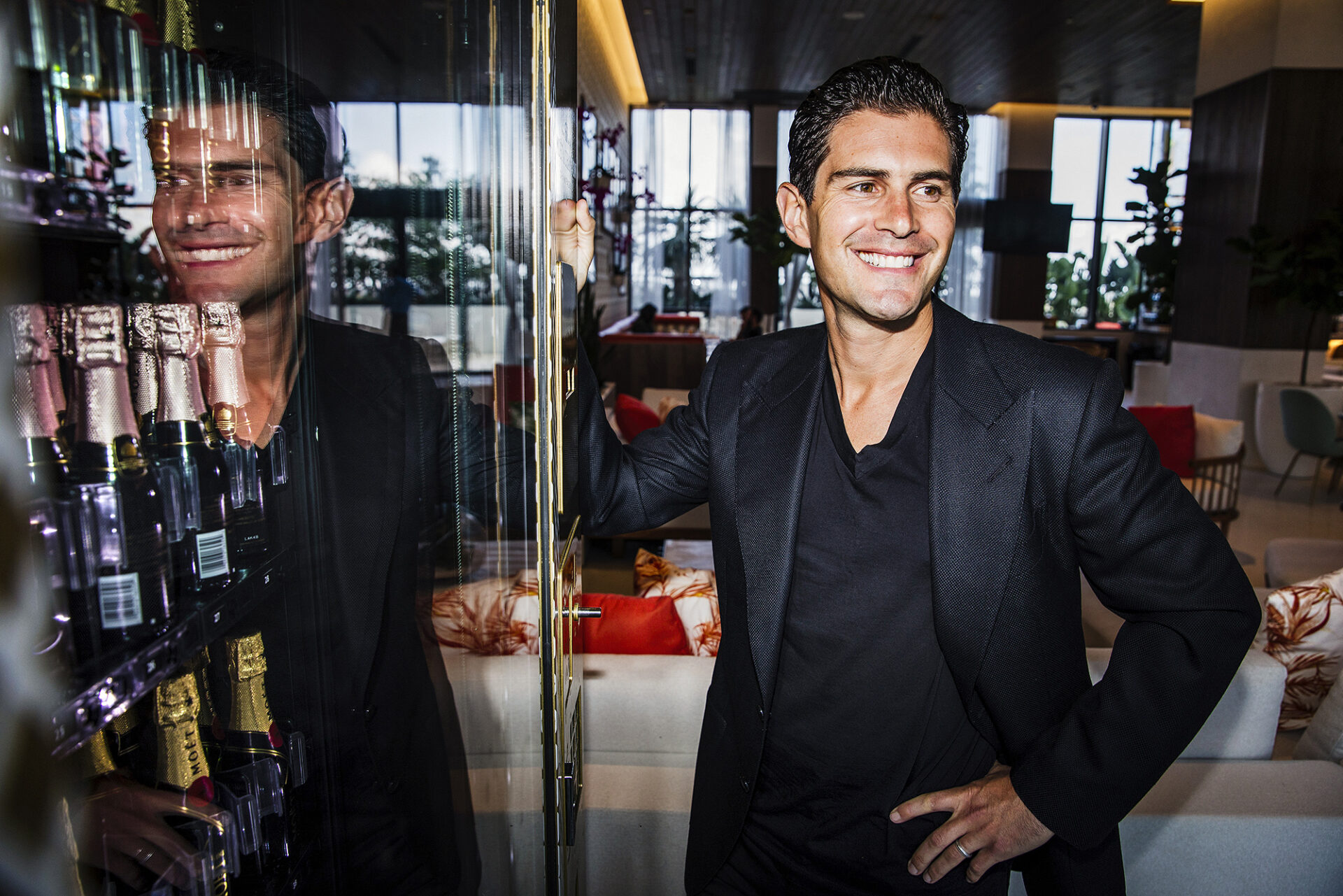 By Nila Do Simon
Portraits by Scott McIntyre

Jake Wurzak remembers it happening on a Saturday night. On his way to pick up dinner for his family at The Fresh Market four years ago, as he passed the traffic light at the corner of Broward Boulevard and Federal Highway, Wurzak looked left. In his periphery, he saw it—the space that would disrupt downtown Fort Lauderdale’s equilibrium.

It’s hard to say what made Wurzak look twice at the plot of land that was at one time home to, of all things, a funeral parlor. But something about it piqued his interest. So, he did what any 20-something businessman would do: He texted the mortuary’s owner, who was an acquaintance, and made him an offer.

Since opening earlier this year, Wurzak’s property, The Dalmar, has become the unofficial gathering spot for Broward County’s socially active. It’s where revelers saunter to experience debauchery at Sparrow, the swanky 1960s-themed rooftop lounge, and where friends gather to host baby showers and other celebrations inside the light and airy Lobby Bar.

Wurzak, 33, opened The Dalmar because, as he says, “I wanted to create a place that I wanted to go to.” When he moved to Fort Lauderdale in 2013, the city didn’t quite have that yet. As someone who grew up immersed in the hotel business, Wurzak had imagined designing a space that rivaled his favorite spots from around the world, including iconic properties like The Mark and The NoMad in New York City and The Miami Beach Edition. It wasn’t so much a look that he wanted to emulate with The Dalmar. It was a feeling.

On the day we meet, he’s dressed in head-to-toe black, including a fitted blazer and loafers sans socks, a sartorial contrast to the bright white backdrop of Lobby Bar. Yet he couldn’t fit in any better. An admittedly “intense guy,” Wurzak radiates childlike joy when speaking about the hotel business, an industry he’s all too familiar with after witnessing his father, Howard, form the Wurzak Hotel Group in the early 1990s and develop several hotels in the Philadelphia area and beyond. (Wurzak’s maternal grandfather, Daniel Tabas, created indelible hotels in Downingtown, Pennsylvania.)

Through his lineage and personal experience, he’s learned that the time and effort required to create a hotel is immense. “So, I want to create less hotel and more impactful experiences,” Wurzak says. “We have the opportunity to create an atmosphere, make it more experiential and more design-oriented. Here, we can do whatever we want. And I like doing what we want.”

The buzz around The Dalmar has been circulating since it broke ground in 2016. The first high-end lifestyle hotel to open in downtown Fort Lauderdale in recent years, the property was touted as having a beyond-trendy vibe that had never been seen before in the city. While countless local venues claim to be something that Fort Lauderdale has never witnessed, in the case of The Dalmar, it’s true.

The Dalmar is a visual feast, a blend of chic California-inspired midcentury furnishings paired with moments of universal flash. Despite being keyed in to the sublime amenities and modern accoutrements that today’s jetsetters crave, Wurzak wanted the space to allude to the heyday of travel, when families would pack their suitcases into their station wagons and road trip for the summer. “I’m an old man at heart,” he says.

The five social spaces, while distinct in look and purpose, all have the common denominator of cool. On the ground floor is Rose’s Coffee Bar, a hip grab-and-go coffee shop named for Wurzak’s 5-year-old daughter’s middle name. Across the hall is the 200-seat Terrace Grill, a dinner-only restaurant with “a big bar and an even bigger personality,” as the hotel’s website describes. Guests are enveloped in dark wood furnishings, jewel-toned upholstery and accents of leather and metallics (even the ladies’ powder room is a showstopper), giving a sophisticated big-city feel to the area.

On the sixth floor, the pool deck and Lobby Bar await. The pool, which is home to the bar and grill Sip ‘n Dip, has views of downtown’s skyscrapers, a reminder that, yes, you’re in Fort Lauderdale’s urban jungle. Adjacent to Sip ‘n Dip is Lobby Bar, a gathering spot with high ceilings, ample natural light, and, get this, a Moet & Chandon vending machine that sells mini Champagne bottles for $30.

And then there’s Sparrow, which Wurzak describes as a midcentury-inspired hyperlounge that’s “total play.” Located on the 25th floor, Sparrow was created in partnership with the proprietors of venerable Manhattan cocktail bar Death & Co., who recently won the James Beard Foundation Book of the Year Award with Cocktail Codex. The posh indoor-outdoor lounge, filled with velvety upholstery and intimately positioned seating areas dotted across the space, exudes an air of exclusivity. Thanks in part to guest DJs spinning records that blare out of speakers stationed every few feet away from each other, Sparrow is designed to be heard. The day before it opened, Wurzak says, “I want this place to be loud. In fact, I think we might even need more speakers.”

Wurzak can’t remember a time when he didn’t want to be in the hospitality industry. By his account, he’s worked every single job in the business, including housekeeping. He recalls working as a host at a restaurant inside one of his family’s hotels when he was 10 years old. “I even got to carry around a beeper,” he says. “I remember thinking how cool that was.”

As he sits on a plush couch inside Sparrow, feet flat against the metallic-speckled tile floors while sipping an iced coffee, Wurzak is acutely aware of how it must look to the outside world: Man in the hotel business has a son; said son grows up in the hotel business; son is quickly gifted an executive-level position at man’s hotel business. But that’s not exactly how Wurzak perceives the ascension. He’s worked hard to earn the respect of not only those who have toiled for years within Wurzak Hotel Group, but also those outsiders who are scrutinous by nature. When his father encouraged him to broaden his background, Wurzak earned a law degree from Nova Southeastern University after graduating with a bachelor’s degree in finance from the University of Miami.

“I use my law degree every single day,” he says. “It teaches you how to think, plus getting the degree also allowed me to mature. It also added a layer of credibility within this family business.”

To be fair, Wurzak is a man who was dealt hotel cards, and he’s smart enough to play this hand—and every hotel hand he’s dealt—as long as he has a chip and a chair. That’s one reason why he’s all in when it comes to Fort Lauderdale. If there’s any doubt how committed Wurzak is to providing the city an upper-echelon hospitality experience within The Dalmar, then let those doubts subside.

“It’s deeply personal,” Wurzak says of The Dalmar. “When we moved here from Miami, Fort Lauderdale lacked a lot of amenities for people to hang out in. And I wanted to lead that change in a tangible way.”

On the myopic level, The Dalmar is located in an unorthodox area. Sandwiched a few steps from a Sherwin-Williams paint store and a Tires Plus auto service location, and across the street from a Greyhound bus station, the property’s immediate radius may lack shiny sightlines. But expand the circumference a bit and the hotel’s location makes perfect sense.

The property opened at a time when Fort Lauderdale is experiencing a population surge and is ranked by Bloomberg as one of the top 21 global destinations to visit in 2019. While most hotels of this esteem can be found on Fort Lauderdale Beach’s popular A1A corridor, The Dalmar is looking to debunk the theory that oceanfront property is king here. Wurzak envisions the property, which is a couple of miles from the beach, as the heart of Fort Lauderdale’s downtown landscape over the coming years, bridging the gap between the area’s business district and Flagler Village, which houses thousands of residents, many of whom are young professionals. The hotel even features the sixth location of the popular workout studio The Yoga Joint, which sees business professionals regularly practicing.

“Our goal is to make The Dalmar the center of Fort Lauderdale, the stop along the way from the downtown business and residential sections,” he says.

Wurzak’s fingerprints are all over The Dalmar, a bet that’s paid off in the eyes of one of his harshest critics: his father. After Wurzak came up with the concept of the hotel, he said he had the hardest time convincing his dad of its viability. “My dad kept saying, ‘This better be a hotel that I want to go to,’” says Wurzak, who partnered with Marriott’s Tribute Portfolio and Element by Westin for the two lodging options within the hotel. “The difference between me and him is that my dad would have wanted more luxury, and I felt the need to open it up a bit.”

Even the hotel’s name was determined in a very new wave manner. As he and his team were workshopping the hotel’s name, they knew they wanted to reference the hotel’s proximity to the beach. “Mar” was a given, with its Spanish translation as “sea.” But what else would accompany it? There were various iterations of the property’s name, including “The Dale Mar” and “The Dalmar.” To get a better picture of what sounded best among their circles, Wurzak’s wife, Kristin, polled her friends on social media. By and large, the consensus was The Dalmar.

In recent months, much has been written about Wurzak in the local media. The property’s publicist has been pushing the descriptive noun “visionary” when referring to him. The truth is that there’s too little in his body of work to confirm the appellation that has been reserved for the likes of Richard Branson and Elon Musk. He’ll have a chance to test his mettle with upcoming properties in northern California (which he’s developing with hospitality mogul Barry Sternlicht, the chairman and CEO of investment at Starwood Capital Group) and King of Prussia, Pennsylvania. And if Wurzak keeps up this pace and over-delivering on expectations, then perhaps today it’s safe to say at the very least that he’s a visionary in the making. After all, he saw how a funeral home could eventually be turned into the ultimate gathering spot for the hip and upwardly mobile. How’s that for vision?

Plant-Based
When Jake Wurzak selected the award-winning DesignAgency, whose clients have included the St. Regis Toronto, The Ritz-Carlton, Toronto and several Momofuku restaurants, to design The Dalmar, the team decided to plan with plants in mind. “The world is rough,” Wurzak says. “Plants can soften things up.” That’s why you’ll hardly walk 5 feet in any of the public spaces without bumping into a fig tree perched in a white planter, a row of snake plants jutting out or a succulent terrarium sitting on a side table. In fact, when putting the finishing touches on the Lobby Bar, Wurzak felt the west wall that was already blanketed with colorful photographs was missing something. His solution? Add magenta phalaenopsis orchids in white West Elm planters.