Follow the Light and the Truth at NSU Art Museum Fort Lauderdale. 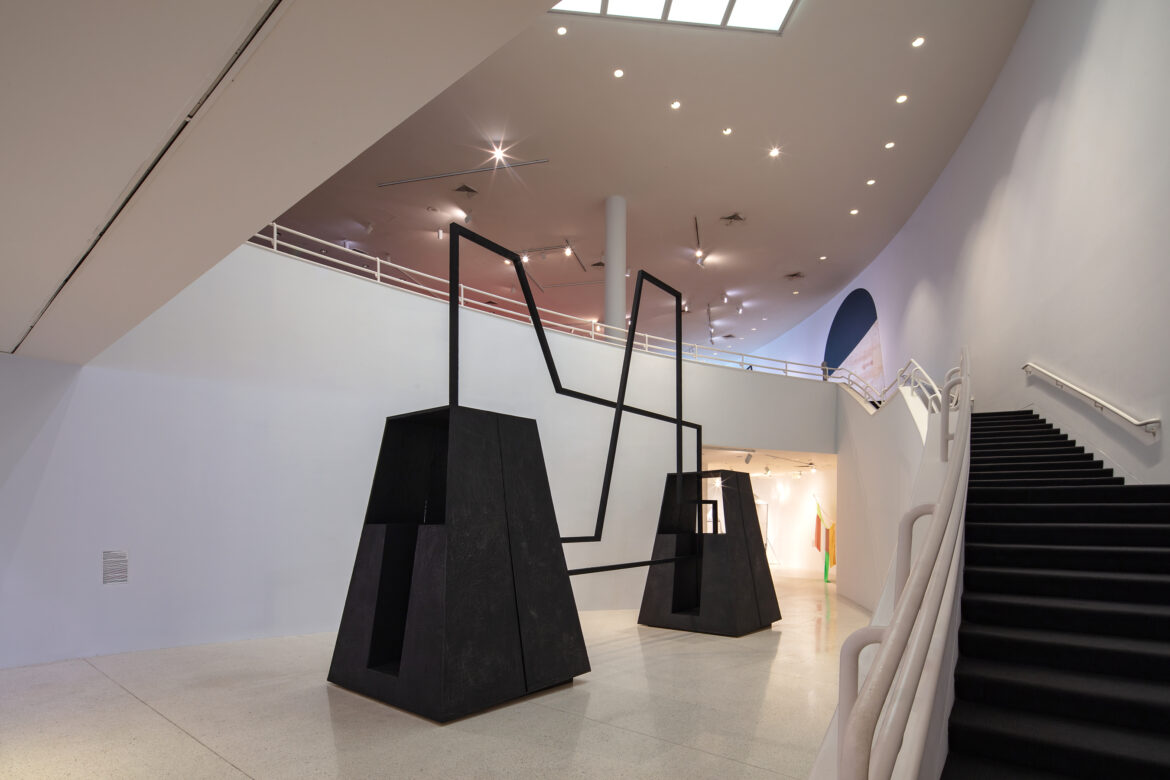 Civil society is often composed of groups of people and organizations that are not associated with their current leaders, authorities or governments—who come together to form broad-based community initiatives run for and by the people. As seen in Armenia, Georgia, and more recently, the Zapatistas in Chiapas, these forward-thinking community members act as one. Grounded within their own circumstances, they commit to action and rise up to call attention to inequalities. As autonomous entities, they accelerate change for the greater good of communities often stunted by inequality, injustice, corruption and poverty. 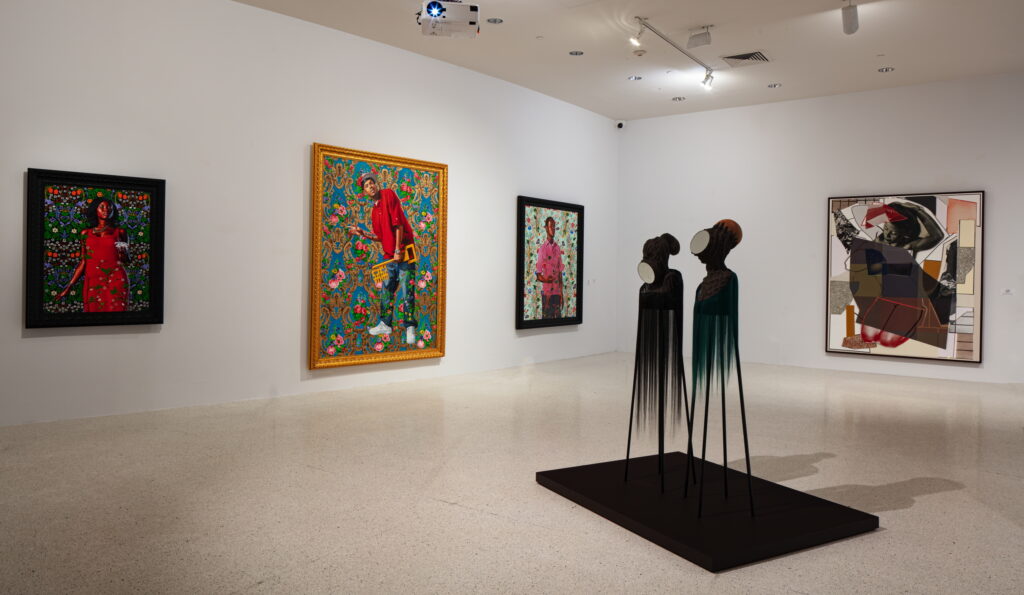 NSU Art Museum’s Director and Chief Curator, Bonnie Clearwater, recognized a similar microcosmic moment occurring in the School of Art at Yale University. Lux et Veritas, an exhibition at the museum—on view from April 2, 2022 – October 3, 2022—draws from this unique social model and explores a transformative period in contemporary art by focusing on a generation of artists of color who did their graduate studies at Yale’s art school between 2000 and 2010. The Yale School of Art had not been historically diverse, which spurred these art students to form affiliations across the school’s departments. The artists within this exhibition filled gaps in the school’s curriculum and counteracted the lack of diversity among the faculty by inviting artists, curators and writers of color to become advisors and guest speakers. Together they developed an interdisciplinary forum, publishing art journals, organizing exhibitions and documenting their experiences in video and photography. 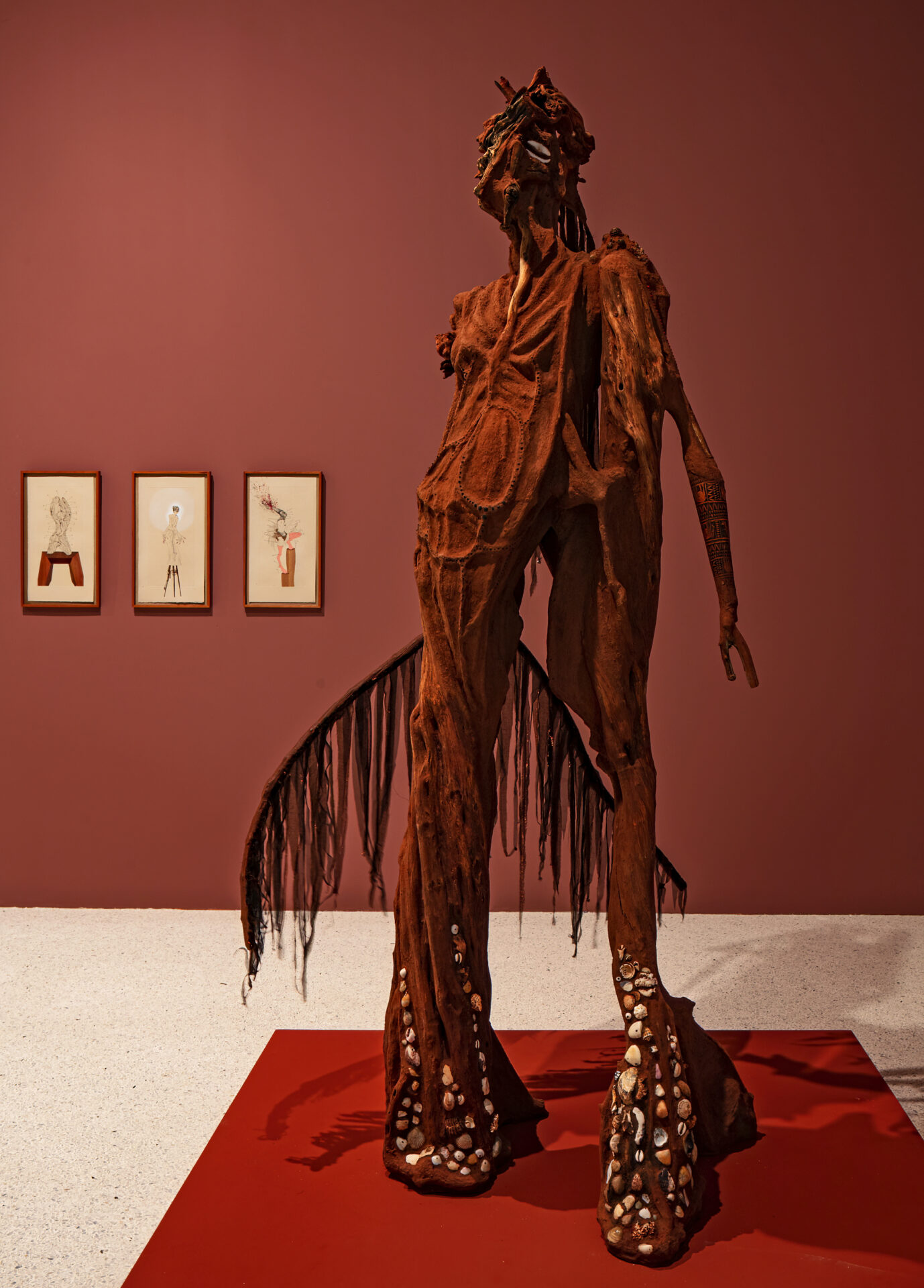 “Paradigm Shift,” an essay produced by the museum, explains this curatorial mission as it relates to the Civil Society movement: “It encompasses artists who thought more closely as a collective during this defining period and who came together out of mutual respect for each other’s work.”

Among the artists included in Lux et Veritas are Mike Cloud, william cordova, Njideka Akunyili Crosby, Abigail DeVille, Torkwase Dyson, John Espinosa, Luis Gispert, Rashawn Griffin, Leslie Hewitt, Loren Holland, Jamerry Kim, Eric N. Mack, Wardell Milan, Wangechi Mutu, Mamiko Otsubo, Ronny Quevedo, Mickalene Thomas, Anna Tsouhlarakis, Shoshanna Weinberger and Kehinde Wiley. The exhibition leads with social and political dynamics, a continual message that weaves itself throughout the museum like an invisible string connecting the artists and their works to one another. The accompanying wall text—usually five or six paragraphs long—provides factual details about the art and also explains the roles and relationships within this artistic civil society. Visitors to the museum are greeted by a wall featuring the lineage of the featured artists and overlapping timelines where influences, friendships and mentoring had advanced their studies, and ultimately their careers. 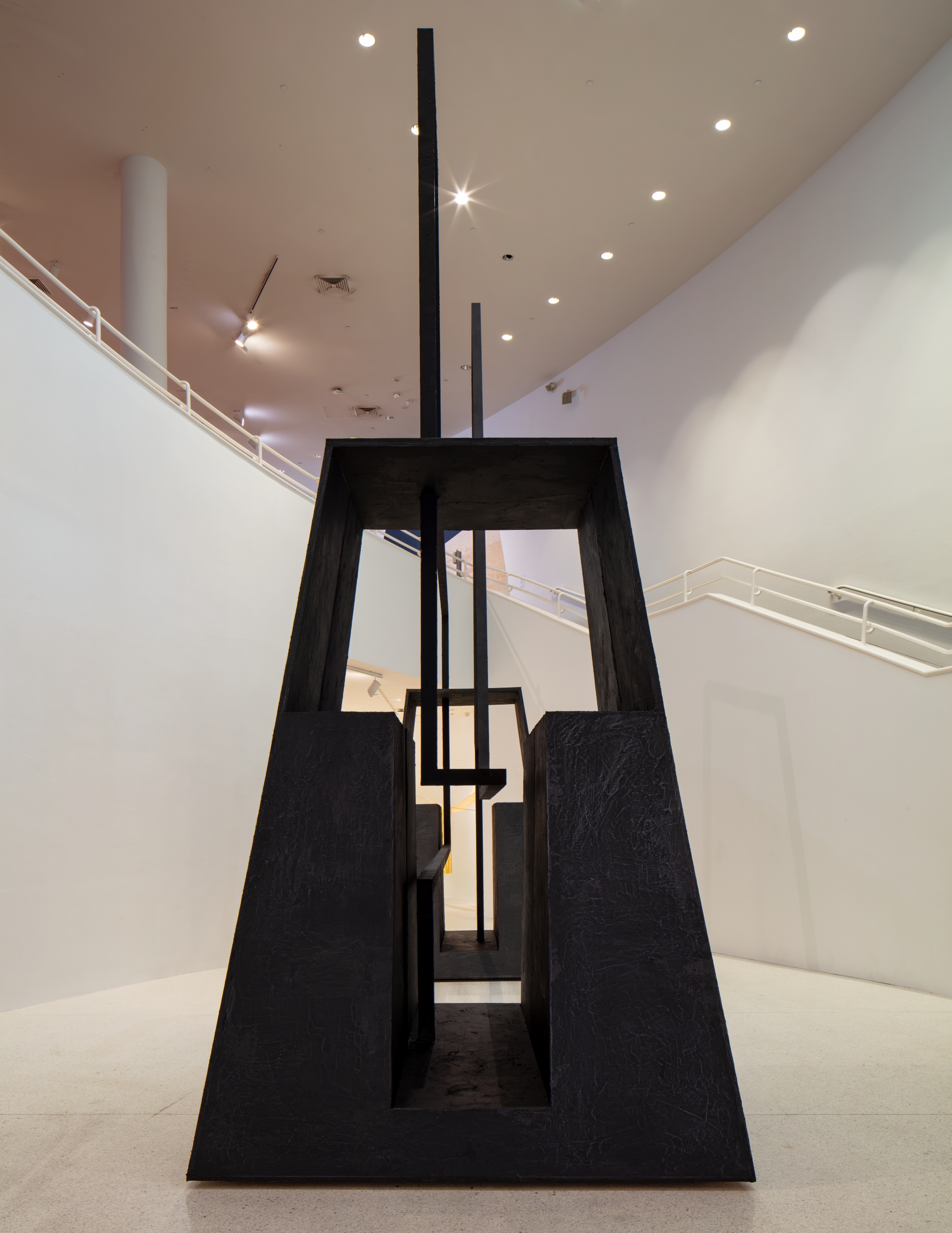 Torkwase Dyson, “I BELONG TO THE DISTANCE (#2). Photo by Steven Brooke

The exhibition’s first artwork is a museum-commissioned sculpture by Torkwase Dyson titled “I BELONG TO THE DISTANCE (#2).” With its statement about confinement, space and liberating movement, the piece sets the stage for the rest of the exhibition.  This minimalistic work, composed of graphite-covered plywood and steel “hypershapes,” speaks volumes about restrictive confinements within given areas, but reference the changing tides, horizon lines and maritime perspectives of sailing slave ships. Explains Dyson, “For Black people, moving through a given environment comes with questions of belonging and self-determination of visibility and autonomy.”

At the exhibition’s entrance are Wangechi Mutu’s mythical guardian sculptures: twin female deity statues holding court, backdropped by a large video loop. Allegorical and anti-Eurocentric, “Seeing Cowries” and “Sentinel VI” radiate a divinity drawn from the earth and all its powers. Composed of various materials including soil, charcoal, paper, hair, wood and shells, these artworks are meditative in their pose and posture—guardians and navigators to an ancient realm where historical and cultural significances are celebrated.

Further along are three large Kehinde Wiley paintings. Arranged as a trifecta that summons the Biblical connotations of the Father, Son and Holy Ghost, brilliant and bold colors burst forth. Baroque ornamentations float, dance and immerse the portraits. Now known as the artist who painted Barack Obama’s presidential portrait, Wiley is recognized internationally as a leading contemporary portrait painter, giving voice to post-contemporary urban identity through the juxtaposition of historical cannons and luxury hip-hop culture, courtesy of young, Black fashionistas. Centered in the arrangement of his three paintings stands The Apostle Peter, a signature Wiley painting that shows a Black man depicting the Apostle Peter as the chosen one holding the key to everlasting eternity, highlighting the diaspora’s desire for belonging. 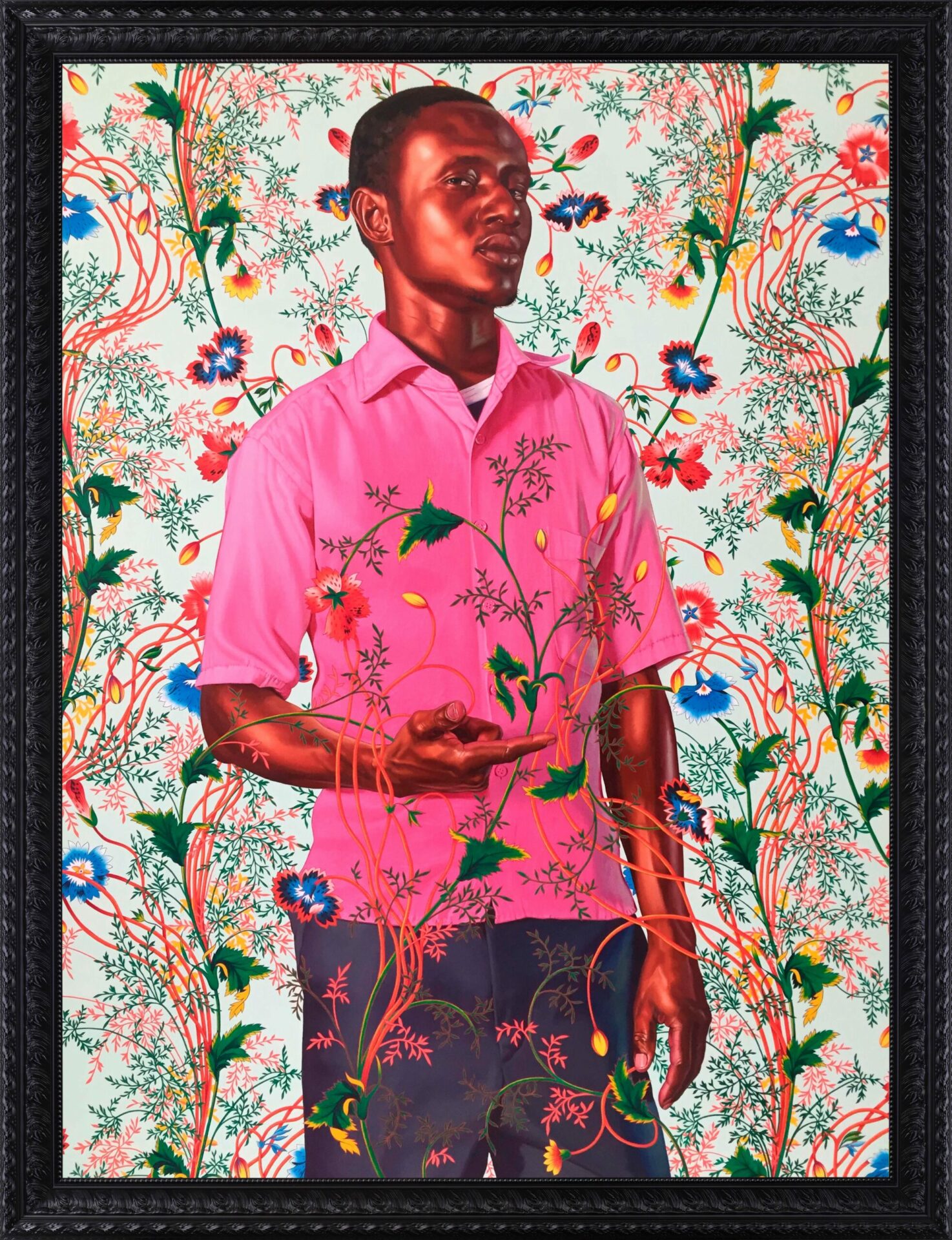 Key to Lux et Veritas is featured artist william cordova, who assisted in the curation and direction of the exhibition. “My role was to organize, document and mentor while at Yale and thereafter,” says the Miami-based artist. “Yes, I kept journals, photos, documents and video of our time in graduate school, but I also documented those who came after. We were as rigorous in building and archiving our presence as those collectives that came before us: AfriCOBRA, Miami Black Arts Workshop, the Hairy Who, Asco, Dark Room Collective, L.A. Rebellion and so many others.”

Cordovas’s practice has been motivated by a creative engagement in architecture, geometry and history. His “quotidian palimpsest,” a mixed-media artwork on white pine, emanates a golden glow while referencing Le Corbusier architecture and the dark, historical importance of gold from the ancient Peruvian Incan cities to the Spanish conquests.

“The work is at once historical in reference to the geographic locations and the idea of sacred resilience through time,” cordova explains “But it is also in reference to disruption, to an alternative type of logic, dimension, theories related to hip-hop, related to magic realism, related to quantum physics and metaphysics.” 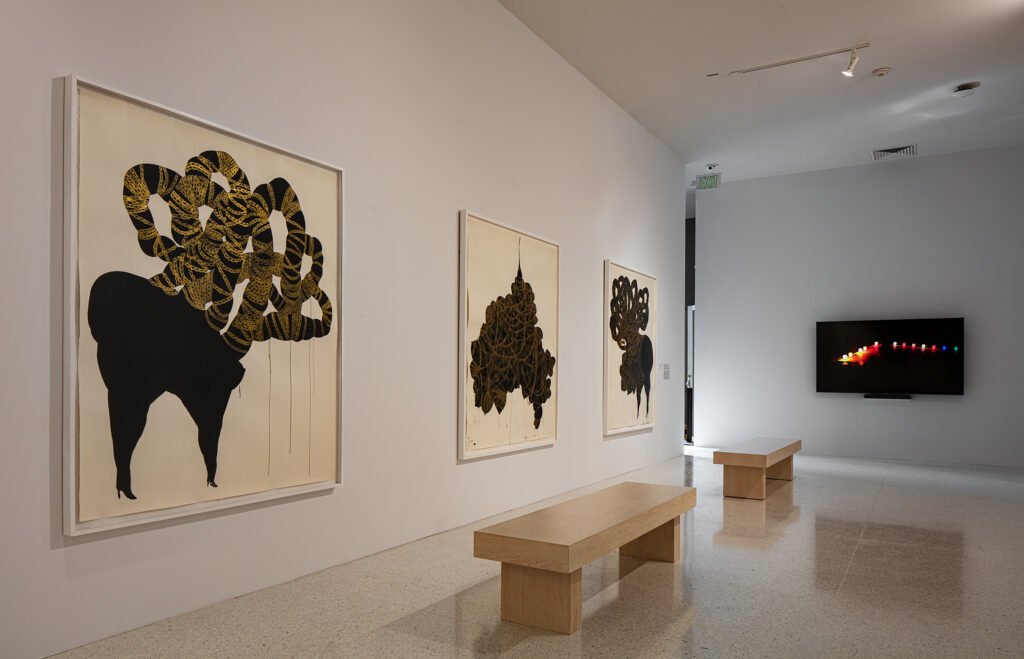 Playing in the back corner of one of the rooms is Ronny Quevedo’s “Critical Mass,” a looping video of tap-dancing feet on a darkened stage. The dancing is both off-beat and out of sync with the dual-layered soundtrack of KRS-Ones’s 1993 political anthem “Sound of da Police” and Simon & Garfunkel’s iconic 1965 recording “The Sound of Silence.” The performer’s feet are the only visuals, and they are occasionally illuminated by the flicker of strobe lights.

Although Lux et Veritas can be viewed in a way that is irrelevant to the academic premise of the curation—an art for art’s sake happenstance—this decade of artists should be celebrated for their reevaluations of the traditional Western art canons and their commitment to a greater recognition of artists of color who have challenged stereotypes and enriched the shared spaces where people learn and think about art.  nsuartmuseum.org