Judd Winick: I feel like this interview should have a soundtrack. What song should accompany this?
Brad Meltzer: That song from college that we put in the video…

Winick: “Winning” by Santana? I don’t know. It’s got an “energy drink for 50-year-olds” commercial vibe now.
Meltzer: No, no…

Winick: Admittedly, I still love that song.
Meltzer: Agreed, but no. I meant Peter Gabriel’s “Solsbury Hill.” I don’t care if it’s in every movie trailer ever these days. It still gets me every time.

Winick: What’s the last song you bought?
Meltzer: Hold on. I’m looking it up right now. Anyone else, I’d lie to. But you… [He pauses as he searches his phone] It was “Dumbledore’s Farewell” by Nicholas Hooper, since my youngest son loves listening to the “Harry Potter” score. There was also DJ Kool’s “Let Me Clear My Throat,” which I just used in a montage for my daughter. And Kendrick Lamar was for me. The madness of all three together is pretty typical around here.

Winick: Actually, it sounds like the music of a dad. You don’t get to choose much anymore. You pretty much just have to eat what’s on the table. With that, do your kids read your books? I think your oldest could probably get into the thrillers and the picture books, which are for all ages, as far as I’m concerned.
Meltzer: No child should ever be impressed with their parents. And my daughter once said, “I hate to read,” just to spite me. So no worries about that. But yes, I think my son will be ready for The Escape Artist.

Winick: That’s the perfect segue into us ranting about how good The Escape Artist is.
Meltzer: You know I never rant.

Winick: Stop talking. I am bragging for you. I’ve been reading your books for 20 years. The Escape Artist is right up there with the very best.
Meltzer: You’re my college roommate. You have to say that.

Winick: We should just do the plot of the book here. Do it. Tell them about Page 1.
Meltzer: The opening page says, “In 1898, John Elbert Wilkie, a friend of Harry Houdini, was put in charge of the United States Secret Service. Wilkie was a fan of Houdini and did his own tricks himself. It is the only time in history that a magician was in control of the Secret Service.”

Winick: That’s the best quote you’ve ever started with.
Meltzer:You sound like my mom.

Winick: She was a good promoter. Now talk about the book.
Meltzer: The Escape Artist opens with Nola Brown. Nola is dead. The government says she’s dead. Her body is brought to Zig, who helps put to rest the bodies of those who die on the government’s top-secret missions. Zig has known Nola since she was little. She was friends with his daughter, and he remembers a campfire accident where Nola lost the top part of her ear. But as Zig examines this body, he sees that her ear is intact. Confused, he runs fingerprints. This isn’t Nola. And as he opens up the body, he finds a note inside saying, “Nola, you were right. Keep running.”

Winick: That’s the part! I love that part.
Meltzer: And that’s Chapter 1. Zig knows the real Nola is alive. He needs to find out who’s after her.

Winick: Plus you have the Houdini stuff. And when people see who Nola really is… and what her character is… I love this book.
Meltzer: And I love your book Hilo! My kids love it, too.

Winick: We will plug at the end. For now, I can’t wait for people to read The Escape Artist. I’m supposed to mention this literacy event you’re doing in Florida. You’re the honorary chair of the Broward Public Library Foundation’s Night of Literary Feasts gala on May 5. Is that like being the Grand Poobah?
Meltzer: That’s the only reason I said yes to it. It sounds like I’m leading a parade. I love leading parades.

Winick: That’s right. You’ve led a parade before.
Meltzer: In Georgia. Georgia let us lead a parade. Free plug time: Buy Hilo Books 1 through 4 by Judd Winick. The series is just like this interview but with robots and cartoons!

Winick: Yes, buy them all. Also, tell people what’s next from you.
Meltzer: The next children’s book is I am Neil Armstrong. But for the next thriller, I can’t shake Zig and Nola. So yes, you’ll see them again soon.

Winick: Go buy The Escape Artist. It will make you a better human!
Meltzer: We really should interview each other more. 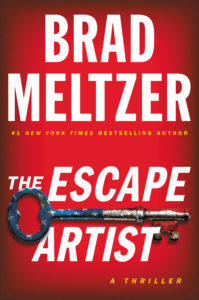