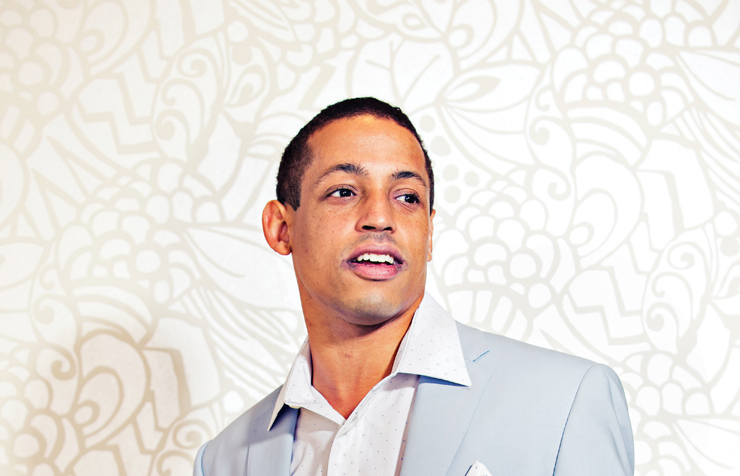 Let’s talk about the acrobatic one-handed catches that took place in the NFL last season. For the average football fan, the one that comes to mind is New York Giants wide receiver Odell Beckham Jr.’s circus-like catch against the Dallas Cowboys in prime time. The grab is so spectacular, so memorable and so analyzed that it’s now simply referred to as “The Catch.”

But there was another one-handed reception that quietly made its way to the highlight reels. Two weeks before Beckham Jr.’s Week 12 grab, Miami Dolphins cornerback Brent Grimes proved he needed only one hand to intercept a ball thrown to premier wideout Calvin Johnson of the Detroit Lions.

It was only appropriate that Grimes, nicknamed “Optimus Grimes,” had been tapped to cover Johnson, dubbed “Megatron,” during the game. The subplot couldn’t have been better scripted: the Autobots versus the Decepticons. The game pitted one of the best receivers the sport has ever seen against a talented but relatively under-the-radar cornerback. On paper, the numbers were deceiving: Johnson (6 feet 5 inches, 236 pounds and second overall pick in 2007) against Grimes (5 feet 10 inches, 185 pounds and completely undrafted in 2006)

“I’ve always had confidence in myself. Even after going to Europe and being on practice quads, I still knew I could be an elite player.”-Brent Grimes

It happened in a nanosecond. The Dolphins had just turned over the ball in the second quarter, and the Lions were in striking position. Quarterback Matthew Stafford looked left and then threw to the right side of the end zone to his favorite receiver, Johnson. Grimes used his 40-inch vertical to leap backward, extending his right arm behind his head for the one-handed interception.

“It was pretty dope,” Grimes says. “I actually thought it was a pretty normal play after I caught it. Then, I remember going to the sidelines after the interception and everyone was like, ‘What the hell?! That was amazing.’ But it really didn’t hit me until later that night, when I saw it on TV, how cool that catch was.”

In person, the reticent Grimes is unlike his on-field football persona. When suited and padded up in his No. 21 jersey, Grimes embraces the action figure/superhero alter ego after which he’s nicknamed: fierce and physical. Off the field, he’s the complete opposite: low-key, calm and quiet.

If Grimes hates anything, it’s doing nothing. He gets fidgety, antsy even. Once, while on vacation in the Bahamas with his wife, Miko, he had one auspice: She could relax on the beach or by the pool while he zipped around the Caribbean on a Jet Ski.

If you ask the 32-year-old how his love of football has changed since he started playing as a kid, he’ll say not much. He’s still that energetic boy who can’t wait to bounce around the football field, only now he’s usually in full pads. Growing up in the working-class neighborhood of West Oak Lane in Philadelphia, Grimes literally had to be pulled off the basketball courts and football fields. Athleticism ran in his genes; his father was an elite basketball player and his cousin was a world-class triple jumper. In high school, Grimes starred as the basketball team’s point guard and the football team’s running back. While the big Division I programs overlooked the undersized Grimes, his skills were good enough that he earned a scholarship to play football at Shippensburg University of Pennsylvania, a Division II school.

During one of his first practices at Shippensburg, then-secondary coach Mark Maciejewski spotted Grimes in running back drills and said he’d be a natural defensive back.

“He just noticed how I moved, that I moved more like a DB than a running back, and that pretty much changed my entire career,” Grimes says.

The move from offense to defense proved fortuitous for the eventual three-time Pro Bowler. After going undrafted in 2006, Grimes played overseas in NFL Europa, the now-defunct developmental league. After winning a World Bowl with the Hamburg Sea Devils, Grimes was picked up by the Atlanta Falcons, where he spent two seasons primarily on special teams.

2009 was a breakout year for the cornerback, recording 66 tackles and six interceptions. The next season was even better, with 87 tackles and five interceptions, which earned him a Pro Bowl alternate selection.

After suffering two injury-plagued seasons (including missing all but one game of the 2012 season with a torn Achilles), the Falcons thought it was too risky to re-sign their once-brilliant cornerback after such a serious injury. The Dolphins scooped up Grimes in 2013, and he’s been a star on their defense ever since.

In his first year with the Dolphins, Grimes picked up where he left off before his injuries, tallying 60 tackles and four interceptions, including one for a 94-yard touchdown return. He earned his second stint at the Pro Bowl that season. He followed with another stellar season in 2014 that earned him his third Pro Bowl selection, not to mention the incredible one-handed interception against Megatron.

“I’ve always had confidence in myself,” Grimes says. “Even after going to Europe and being on practice squads, I still knew I could be an elite player. The NFL is a business; the teams are going to play their big-money players who were drafted in the first or second rounds before they play an undrafted kid. I just always had to have belief in myself.”

Grimes has high hopes for his defensive corps’ upcoming Dolphins season, which builds off a top 10 ranking in pass defense and first downs allowed per game. With the signing of the dominant defensive tackle Ndamukong Suh in the offseason and with defensive end Cameron Wake coming off another Pro Bowl season, there’s no doubt that expectations are high.

Now living in Davie with his wife and 2-year-old son, Aiden, Grimes says he’s living the life. He’s out of the cold Northeast, enjoying the tropical weather and playing football, the game he loves. Not a bad life for a superhero.

Originally appeared in the Fall 2015 issue.