By Nila Do Simon
Photography by Felipe Cuevas

For Chef Michelle Bernstein, it’s about right now. With her days of presenting classically prepared haute dishes behind her, Bernstein is now focused on showcasing soul-pleasing cuisine with her newest venture, CENA by Michy.

Set in the same spot on Biscayne Boulevard that housed her award-winning Michy’s for nearly 10 years, CENA by Michy is not only the second coming of that restaurant, but also Bernstein’s palate.

“Now that I’m in my 40s, now that I have a child, I eat differently than I did before,” says Bernstein, who quietly opened CENA in May alongside husband and business partner David Martinez. “So it made sense that my cooking went forward with me, not backward.”

Despite its Spanish name, CENA (which translates as “supper,” typically the most important meal of a Latin household) incorporates much more than Spanish and Latin cuisine. The menu is divided into categories—vegetable, meats, seafood and pasta—meant to be communal appetizers. The vegetable-centric selections weren’t placed on the menu by accident; instead, they are intended as the highlight of the menu.

“Vegetables are becoming the new protein,” Martinez says. “Why not let them be the showcase and the star of the dish?”

The bar serves classic cocktails with, not surprisingly, a Miami twist. The Juan Draper, for example, is a new version of an Old Fashioned. The cocktail menu also includes frozen craft drinks, a trend that’s taking over New York City, which will be on a weekly rotation. But as Martinez puts it, “You won’t find strawberry daiquiris on this menu.”

Bernstein burst onto the South Florida dining scene in the early 2000s while at Azul at Mandarin Oriental, Miami, before she opened Michy’s in 2005 with Martinez. Since then, they have made opening restaurants look easy. In addition to CENA, they’ve manned two pop-up restaurants for last year’s Art Basel Miami Beach and, most recently, opened up the elegant brasserie Seagrape in the Thompson Miami Beach.

After Michy’s closed in July 2014, the husband-and-wife team spent 10 months tweaking the CENA menu and ambience. When CENA opened, it had a decidedly different feel from its predecessor. “CENA epitomizes that everyday neighborhood restaurant,” Martinez says.

Adding to the approachable vibe, the hip, youthful wait staff is outfitted in tailored urban wear and sneakers. The restaurant’s design, like the food, is stripped down, rustic yet sophisticated. Cerulean blue and gold decor accent the intimate space, and the open-concept kitchen allows diners to see Chef Bernstein herself firing up dishes.

For now, the restaurant only serves dinner, though Bernstein and Martinez haven’t ruled out adding lunch service. “Baby steps,” Bernstein says. “CENA will continue to evolve, but with baby steps.” 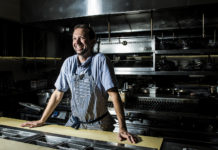