As Ralph Lauren fêtes his brand’s 50th anniversary, the American fashion designer has returned to the spot where he opened his first international flagship: London.

In January, Lauren unveiled his first restaurant in the United Kingdom, Ralph’s Coffee & Bar, in London’s posh Mayfair neighborhood. The new café’s design takes a page from the equestrian-heavy décor of its New York sister spot, The Polo Bar—think a brass-topped bar and saddle-leather banquettes—but instead of being one of the city’s most challenging spots to snag a table, Ralph’s offers the same signature American fare minus the fuss.

Lauren is just one of a handful of international restaurateurs, top chefs and award-winning bars spearheading London’s culinary renaissance with the opening of U.K. outposts. There was a time when the world viewed British cuisine as strictly pub fare in the form of fish and chips and hearty Sunday roast, but London’s reputation is slowly shifting as world-renowned chefs are proving the city can serve up more than comfort food. And now that British Airways has launched a new route from Fort Lauderdale-Hollywood International Airport to London Gatwick, it’s even easier to hop across the pond and sample food from the latest hot spots.

“Long gone are the days when British food is ‘meat and two veg’ and people only look to cities like Paris and New York for exceptional meals,” says David Young, head concierge at the five-star Brown’s Hotel, which opened as London’s first hotel in 1837. “Just look at the top 50 restaurants of the world and the fact that London now naturally attracts celebrated international chefs looking to expand upon their successful restaurant empires.”

One of the restaurant moguls returning to the city this summer is Michelin-starred French chef Jean-Georges Vongerichten, who runs nearly three dozen restaurants in cities across the globe, with three at The Miami Beach EDITION alone. In London, he operated the successful French pan-Asian restaurant Vong at The Berkeley for almost a decade. It’s been 15 years since Vong closed, and Vongerichten waited for just the right moment to launch his latest project, Jean-Georges at The Connaught.

“I stayed at The Connaught during my first visit to London in 1985, and since then, it has remained my favorite hotel in the world,” he says. “When the hotel team approached me, I felt this was simply an opportunity I could not turn down.”

Taking over the former Espelette space, the eatery will feature floor-to-ceiling views looking out on Mount Street with artwork selected by the chef himself and a menu of light, brasserie-style classics—think British specialties like poached-egg-topped baked beans, as well as healthier dishes like avocado toast and chia bowls.

Another name South Floridians may recognize is Nobu Hotel, which opened a property on Miami Beach last year. This summer, the culinary-inspired boutique hotel brand hops across the pond to London’s hip Shoreditch neighborhood. Nobu Hotel Shoreditch is Europe’s first Nobu Hotel, but the city already features two of celebrity chef Nobuyuki Matsuhisa’s Japanese eateries. The hotel houses the city’s third Nobu restaurant, which is the first in London to serve breakfast. The much-anticipated menu includes whimsical dishes like chicken with matcha waffles and a Japanese version of eggs benedict with crab and crispy tofu, as well as Shoreditch-specific cocktails and dishes.

For her first U.K. eatery, Anne-Sophie Pic—the only female chef in France to currently hold three Michelin stars—set her sights on the new Four Seasons Hotel London at Ten Trinity Square. Located inside a 1922 beaux arts building near Tower Bridge, La Dame de Pic London is the sister spot of the chef’s Paris-based, Michelin-starred eatery. The sophisticated bistro features soaring ceilings and elegant, mirror-encased columns, plus cuisine that blends the best of British produce with Pic’s French background. Linger over the tasting menu with flavors just as vibrant as the colors jumping off plates of delicately arranged asparagus roasted with pastis and Scottish langoustine served with a bouquet of heirloom carrots.

In August, New York’s The Dead Rabbit—described as “an Irish bar for the 21st century”—will pop up for a week at London’s Claridge’s Bar. Voted No. 1 on the list of The World’s 50 Best Bars 2016, the lower Manhattan institution will recreate its second-floor “parlor” (aka the “cocktail cathedral”) from August 15-22 at Claridge’s, the art deco hotel known for serving some of London’s most spectacular afternoon tea.

The 19th century-themed bar will bring a taste of Manhattan to Mayfair, transplanting elements from the sounds of ragtime piano to specialty bar snacks such as lobster deviled eggs. “The idea behind The Dead Rabbit was to combine the atmosphere of a pub with the service and standard of a five-star hotel, so bringing our bar to Claridge’s makes sense,” says Sean Muldoon, co-founder of The Dead Rabbit. “The cocktail industry is always expanding and becoming more connected, and New York and London are almost like twinned cities with bars.” 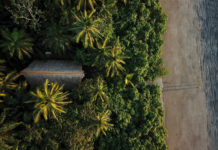 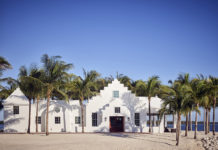