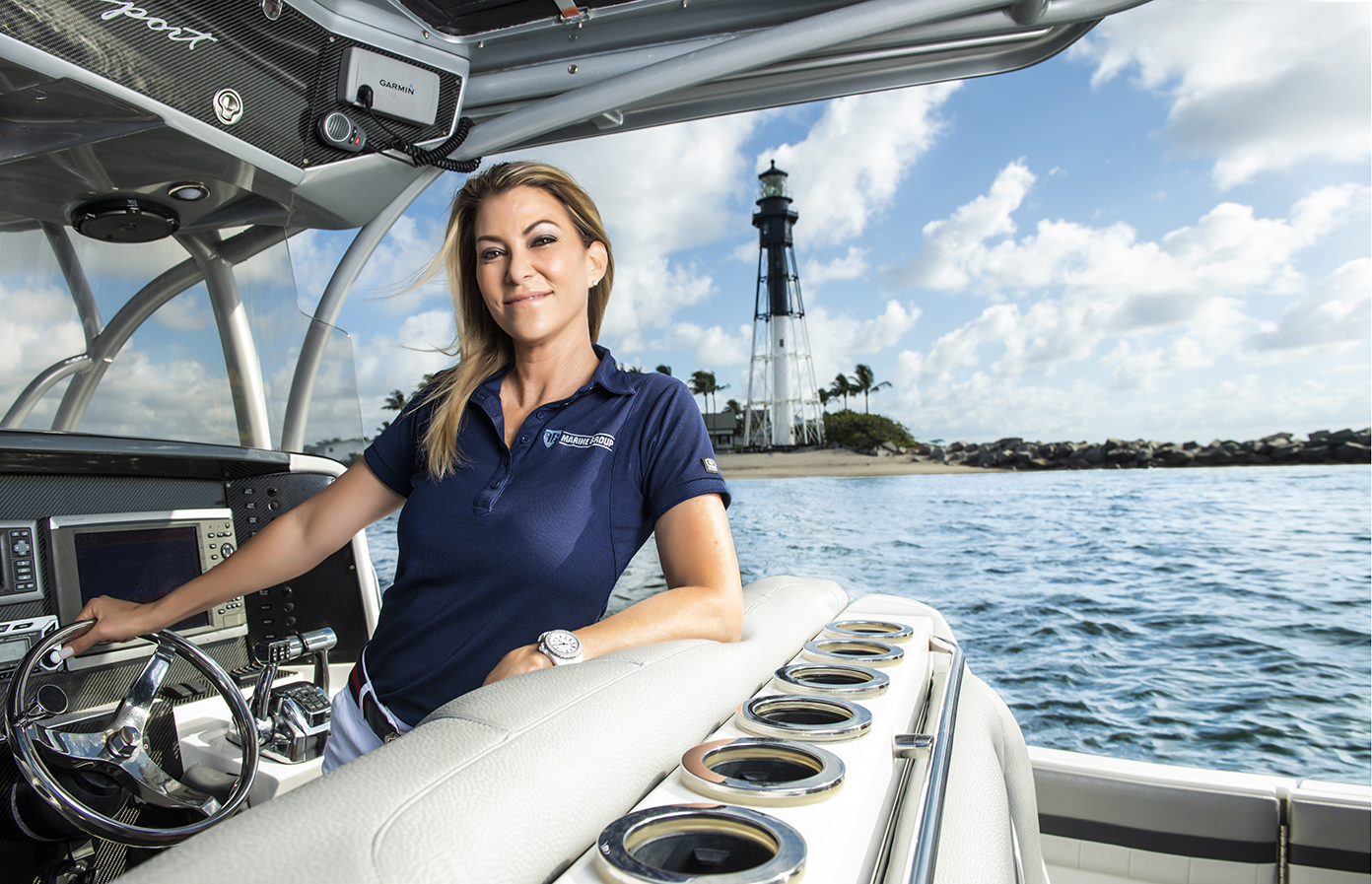 “They say the two best days of your life are the day you are born and the day you know why,” Kim Sweers says. For the managing partner of one of South Florida’s leading marine dealerships, it is this strong sense of purpose and a push-vs.-pull ideology that propel her forward, whether she’s running her family business or fulfilling personal goals.

Founded in 1994 by Sweers’ husband, Randy, FB Marine Group operates within the $23.3 billion recreational boating industry—a $12 billion industry in South Florida alone. The company began as a boat brokerage house specializing in get-you-there speedsters like Cigarette, Formula and Donzi high-performance racing boats. At the time, Sweers was working in the corporate world as the vice president of sales for a data company. After the dot-com bubble burst, she pivoted to become an investor in her husband’s company. Together, the duo grew the boat sales business to a full dealership model with a diverse portfolio, which now includes the sale and service of new and pre-owned cruising, fishing and leisure boats from about 20 to 100 feet. The company also handles yacht management, charter and government service contracts.

The waterway to success hasn’t always been smooth sailing for Sweers, whose life—both business and personal—has seen its fair share of storms over the last 25 years. “We had 9/11, then 2008’s recession, then breast cancer and now COVID-19,” she says.

FB Marine Group was having its best year yet cruising into 2020, Sweers says. Nationwide, the marine industry had recently seen a surge in boat sales. The company had crawled out from under the effects of the 2008 financial crisis and was experiencing 15% to 20% year-over-year growth. 2020 was poised to be “explosive.”

But then COVID-19 hit. Focused on FB Marine Group’s 29 employees and their families, Sweers and her husband made a commitment: No one would be laid off or furloughed.

“You can either give up or follow your ‘why,’” Sweers says. “I get up every day and hit it hard because people are depending on me.”

At the beginning of the pandemic and lockdown, sales were down 65% to 70%. Boat ramps and marinas around the state closed. Service work from Broward County’s marinas, which provided the company’s cash flow, was nonexistent. 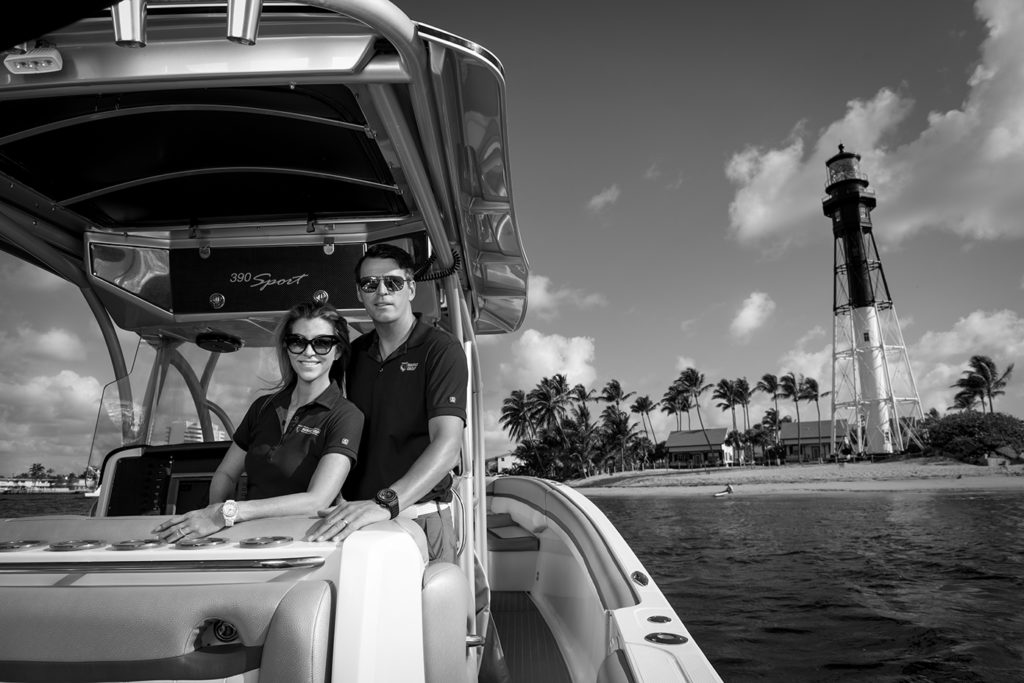 Along with her husband, Randy, Sweers has expanded FB Marine Group from a brokerage house specializing in racing boats to a marine dealership offering a range of vessels and services.

During this murky time, Sweers turned to the advice of her late friend, Marti Huizenga. “She used to say, ‘Find your silver lining, and pay it forward,’” Sweers recalls. Cancer had become a corporate initiative for FB Marine Group when Sweers and her husband both lost a parent to the disease. Sweers befriended Huizenga during this time and now sits on the board of directors for the Moffitt Cancer Center Foundation, which Huizenga and her husband, businessman and philanthropist Wayne, avidly supported. When Sweers was diagnosed with breast cancer in 2014, her friend’s saying became her mission. The Sweerses’ son, Chase, even started C3 For Change, which has raised hundreds of thousands of dollars for organizations that focus on the care, education and support of people with cancer.

It was a business decision made eight years ago that would be the silver lining of the COVID-19 cloud for FB Marine Group. In 2012, Sweers began bidding on and earning government contract work, maximizing FB Marine Group’s reputation as a reliable refit, paint, service and fiberglass provider not only for retail and manufacturer customers but also for harbor patrol boats, safe boats and other government-owned marine vessels. As a government service provider, FB Marine Group was deemed an essential business and remained operational during the shutdown, with administrative and sales employees working remotely.

“We serviced our retail customers and that carried us through,” she says. “We got hit really hard on the sales side, as did many others in the boat business. We were flat for two-and-a-half months, and it was an eye-opening experience for everybody.” But the Sweerses followed through on their commitment, keeping all 29 team members on payroll.

Once the marinas and boat ramps reopened in late April, business picked up and FB Marine Group seized the opportunity to capitalize on buyers’ new mindset with a clear message: Get on the water, where it’s easy to practice social distancing. Sweers says the company has seen more first-time boaters than ever inquiring about purchasing or chartering boats. But she is quick to stress that boaters have a responsibility to boat smart from the start and be vigilant about maintaining social distancing guidelines and avoiding large groups and on-the-water gatherings, such as raft-ups.

Staying in tune with their industry and clientele keeps the Sweers family and FB Marine Group ahead of the wave. Next on the horizon: The Fort Lauderdale-based company will soon relocate slightly north to a new 23,000-square-foot marine building off I-95 in Pompano Beach that will serve as a dealership and service/refit center. Sweers, the self-described “boat boss,” says she is ready for the next chapter. “When you’re faced with adversity,” she says, “you either succumb or you plow through.”

Artist Haiiileen hones in on a trippy, psychedelic world