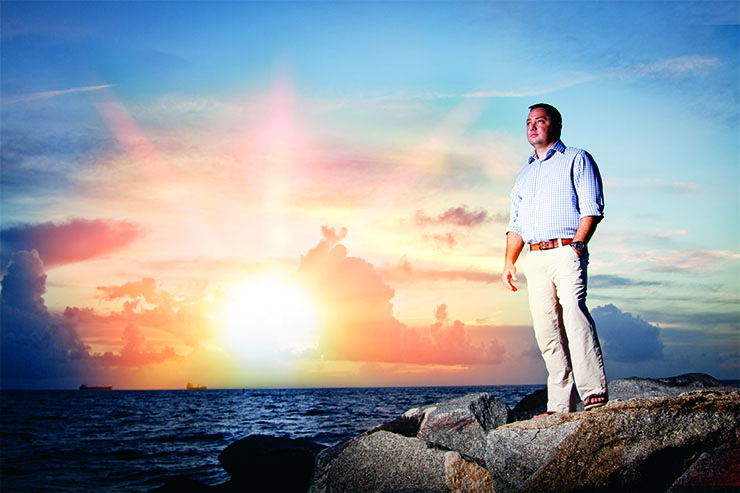 “We’ve seen a transition we’ve been able to be a part of: making Fort Lauderdale a more vibrant,active 24-hour city.” — Kenneth Stiles

From his office in downtown Fort Lauderdale, Kenneth Stiles can glance out a window to view portions of his family’s legacy: 350 and 450 East Las Olas Boulevard; the Bank of America Plaza at Las Olas City Centre; and the New River Center, the former Sun Sentinel building.

“We’ve seen a transition we’ve been able to be a part of:?making Fort Lauderdale a more vibrant, active 24-hour city,” says Stiles, the co-CEO of the Stiles development firm. “It’s something as a family we are very proud of.”

Now, in a transformational changing of the guard at the 65-year-old company, Stiles is poised to become the sole CEO at year’s end, effectively taking the reins from his father, Terry, the iconic developer who has led the firm since the early 1970s. The younger Stiles will be working closely with Scott MacLaren, a 17-year company veteran who will become its president.

For Stiles’ part, he knows the way forward requires a team effort to prosper and grow. Speaking at his company’s headquarters, in a building that the corporation revitalized at 301 East Las Olas Boulevard, the 35-year-old Stiles already has a major hand in directing the activities of 350 employees in Florida, North Carolina and Tennessee, though he knows it’s just the beginning of a long career. “I have very large shoes to fill,” Stiles says of his father. “And we realize that for one person, it is going to be hard to fill them.”

The firm has come a long way from its startup year in 1951, when Stiles’ grandfather, Howard, opened for business with five employees. Howard had come to Florida from Cincinnati for health reasons in the 1940s. He died of a heart attack in 1971, and at the age of 23, Terry found himself in charge.

The succession process has been as calculated as it is methodical. “The company has been developing this succession plan over the past decade,” the elder Stiles says in a statement. “This has included establishing a board of directors, investment review committee, executive committee, a key leadership transition plan, and the like. Ken and Scott are deeply committed to the vision and business strategy that has fueled our success over the years, and we are extremely confident this plan will solidify the leadership of the company for decades to come.”

A graduate of Cardinal Gibbons High, the younger Stiles earned a bachelor’s degree in business administration from Elon University in North Carolina. He initially worked in the sports fishing charter business, an occupation that took him to the Bahamas, Brazil, Panama and St. Thomas.

Stiles joined the company in 2005 as an assistant development manager for office building projects and bank branches in Broward and elsewhere around South Florida. He later became investment manager, overseeing millions in company investments ranging from the YOLO restaurant and VIBE nightclub in Fort Lauderdale, to the Bank of Florida in Oakland Park and the Oak Tree Landing “fly-in” community in Gilchrist County.

“When I came back 11 years ago, I was excited to finally dig into a role and actually make an impact here,” Ken says.

Looking ahead, he likes the prospects that lie ahead for his company—despite a slow-growing national economy. Besides Florida projects, the company is involved in mixed-use and residential development partnerships in Charlotte and Nashville.

Financially, Stiles Corporation has good access to capital. Terry Stiles’ long-standing business community relationships have allowed the firm to raise funds via “country club equity” or participations by private individuals, as well as from large institutions such as Prudential and from regional banks, depending on the size of the deal.

“I couldn’t be more excited about the opportunities our company has before us,” MacLaren says. “We have a seasoned executive management team, led by Ken, and extremely strong divisional leadership to drive our operating businesses. The market is strong and is presenting great investment opportunities, but at the same time we are making sure to stay focused on fundamentals and be smart about where we spend our resources right now.”

About four years ago, the company formed the Stiles Investment Fund, which raised $25 million to acquire properties in Fort Lauderdale, Palm Beach, Ormond Beach and Orlando. “Over the next six to eight months we’ll probably be back out in the market to try to raise $100 million,” says Ken, whose sisters Tresa and Carrie also sit on the Stiles board of directors with him.

“There is a lot of growth for South Florida,” he adds. “We’re bullish on downtown Fort Lauderdale right now. We’re actively in the planning stages for another high-rise office tower in downtown. There hasn’t been any new office space in 10 years. And we’re actively in the design stages of office buildings in Palm Beach and West Broward. There are still people who want to move here. There is spillover from Miami-Dade County, and I think you’ll see people wanting to move this way.”

Considering his corporate duties, community involvement (the Museum of Discovery and Science, and Cystic Fibrosis Foundation, among others) and growing family, Stiles’ plate is full. He and his wife, Brittany, have a toddler son, Hudson, and a second boy on the way, which means South Florida might be in store for a fourth generation of Stiles developers.