Tired of the typical Caribbean circuit? Set a course for the unspoiled island of Nevis. 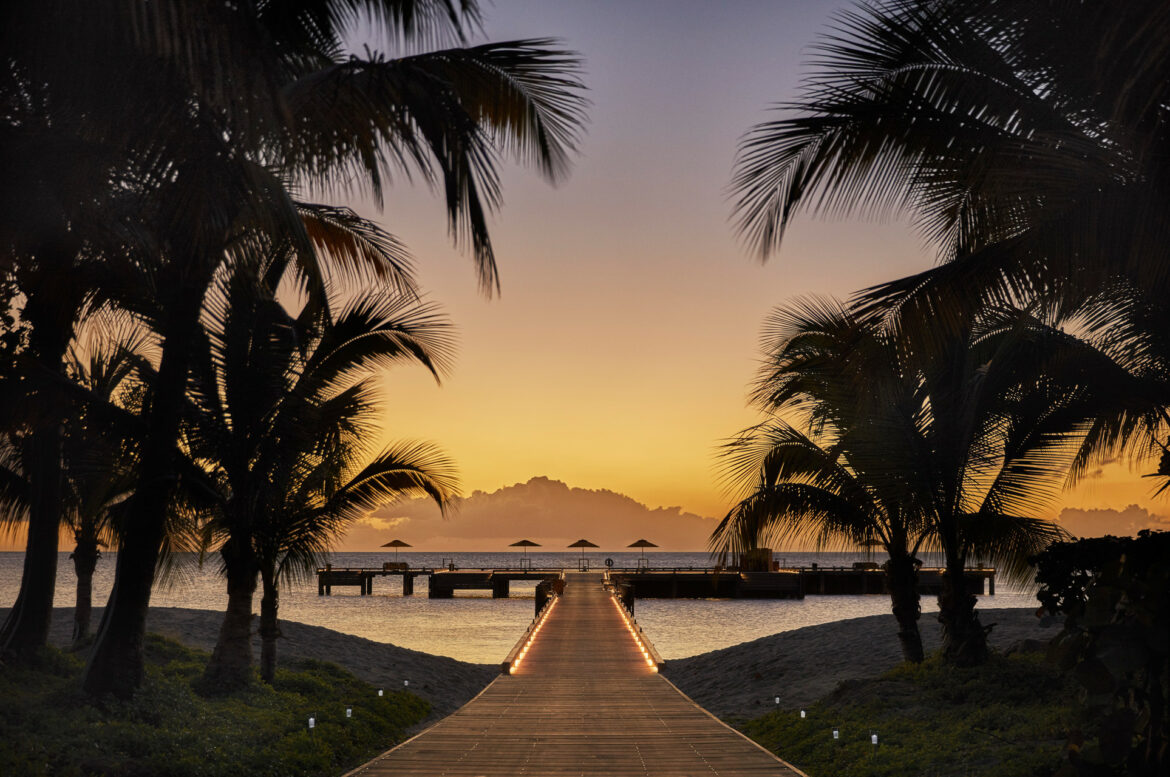 Clouds play a perpetual game of hide-and-seek around the crown of Nevis Peak, begging me to keep watch in hopes that the ominous puffs will suddenly disperse and reveal an unobstructed view of the volcano holding court over the island of Nevis. For one fleeting moment, the majestic peak comes into full view—until the clouds prevail and once again obscure the skyline.

Watching this spectacle becomes a preferred pastime on the tiny island, which is blanketed by thick jungles where Vervet monkeys, brought over as exotic pets by early settlers, swing through palm trees, and where donkeys, goats and sheep roam freely. The only other blissful distraction is scanning the surface of the blue-green water for sea turtles randomly popping their heads above the gentle waves. 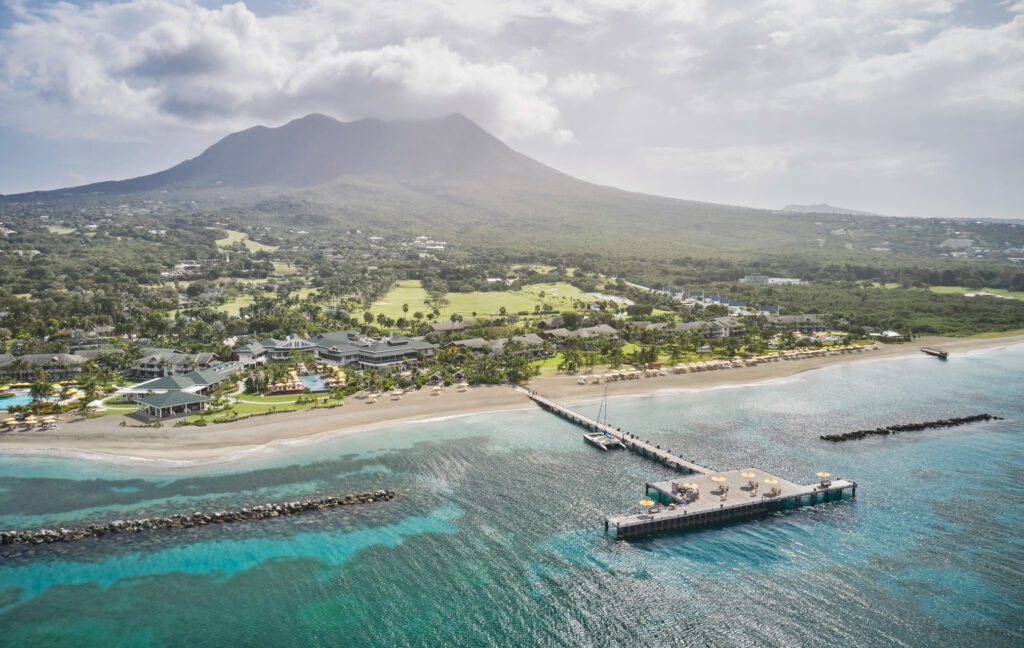 A carefree day of observing nature on Nevis, the 36-square-mile sister island of St. Kitts, located at the northern end of the Lesser Antilles archipelago, never gets old. While frequented by famous notables like the late Princess Diana, who glamorously vacationed there with her young sons in the early ’90s, the island remains refreshingly unspoiled and undiscovered by the masses. Most vacationers that are privy to the island fly into St. Kitts then take a speed boat over. However, Nevis is now rising as a superyacht destination, thanks to the opening of the elite Marina at Christophe Harbour in St. Kitts, where a high-brow crowd docks and travels to Nevis by tender.

“With yachters looking for new destinations outside of the typical Caribbean islands, more and more travelers are opting to arrive to Nevis by sea. And what better greeting than the spectacular views of the Nevis Peak,” says Yvette Thomas-Henry, regional vice president and general manager of Four Seasons Resort Nevis. “Depending on the size of the yacht, guests can moor off of the resort’s pier.” 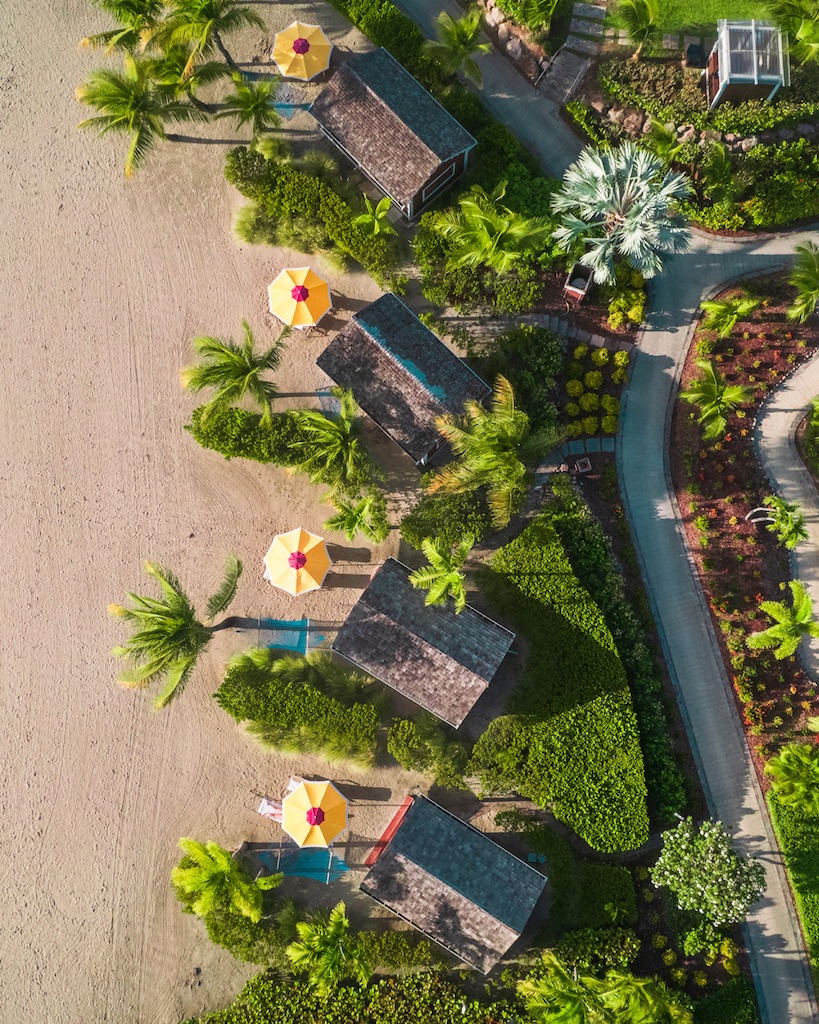 The Four Seasons Resort Nevis casts its own magic with 350 acres dotted with towering palm trees, eye-popping flowers, a prime spot on Pinney’s Beach and stunning vistas of Nevis Peak. Guests can choose from recently remodeled rooms and suites that capture the locale, including furniture swathed in fabrics featuring cheeky monkeys and the island’s vibrant flora and fauna; or extravagant rental villas fitted with pools and outdoor kitchens where chefs will cook a grand feast, hold a rum tasting or even host a hot-sauce-making class.

Spend the day snorkeling the calm waters that front the resort, chasing turtles and tropical fish who play in the seabeds, tuck away in a beachfront hut with a hammock or kick back at the picturesque Limin’ Pool. At sunset, make a beeline for the long pier that stretches over the ocean to soak up those stunning vantage points of the volcano while sipping the resort’s specialty rum punch, Kendie’s Kick. One of the Four Seasons’ most special experiences, “Spa Under the Stars,” happens after the sun sets. Guests can indulge in a private massage in an open-air pavilion at the spa, where the only sounds you’ll hear are those provided by nature. Decadent pampering is followed by dinner, dressed in your spa robe. 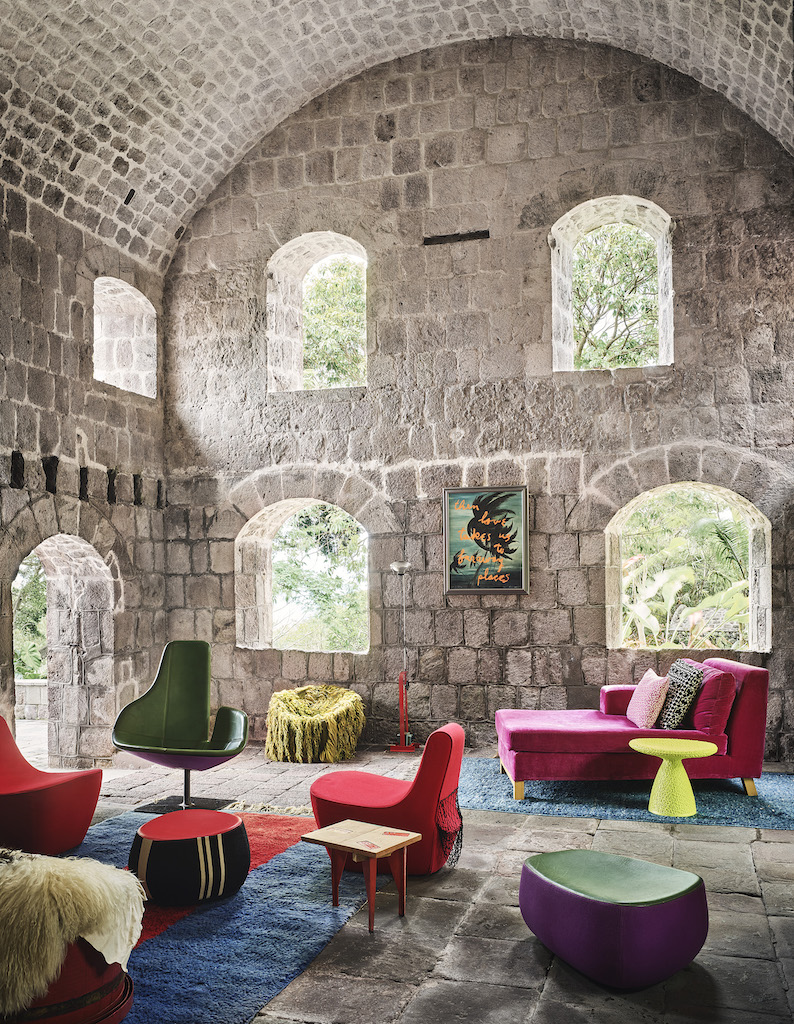 To fully appreciate Nevis’ natural charisma, veer from the typical sleep-beach-and-repeat vacation with a stay or visit to Golden Rock Inn, located in the jungle’s interior. Perched on a hillside at the base of Nevis Peak, this bohemian paradise, owned by prominent New York artists Helen and Brice Marden, entices one to quickly decompress. Formerly the site of a sugar plantation, the rustic property with 11 rooms feels intentionally raw, easily intermingling with its natural surroundings thanks to expansive gardens fashioned by Miami landscape architect Raymond Jungles. “Helen wanted it to feel grown in, like you’re stepping over vines and pushing past branches and plants,” says the head gardener, Keith, as he

shimmies down a nearby mango tree.

The Mardens also envisioned a stay fully immersed in the sights and sounds of the jungle. From al fresco meals at The Rock, considered one of the best restaurants in Nevis, where you’ll dine on grilled lobster, locally caught fish and dishes dashed with exotic flair, and sip potent rum punch touched with nutmeg at golden hour; to rooms without air conditioning or television so as not to interrupt the soothing sounds of nature, which regularly include a choir of tree frogs to sing you to sleep. Wake up with yoga by the spring-fed pool, then grab one of the art sets to paint on the patio of your room or at another inspiring area. 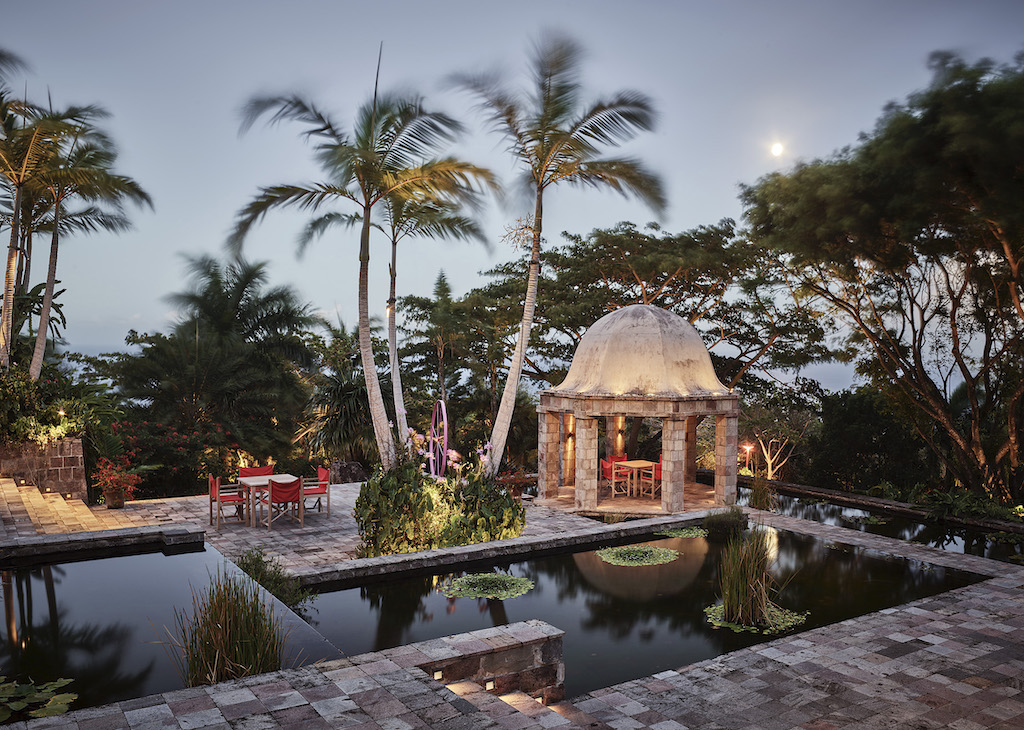 Staying at Golden Rock presents the chance to set off on foot with a guide to scale Nevis Peak, a strenuous climb that’s not for the faint of heart. For several hours, my group scrambled through the thick jungle, trudging through slippery mud, hoisting ourselves up the slopes with ropes, and digging our feet and hands into the nooks and crannies of rocks to move up the steep volcano. While grueling, making it to the sliver of land at the peak and signing the book that’s there is a giddy accomplishment. However, the way back down is even more challenging, as you’ll need to rappel with ropes and even slide down on your backside because your legs and arms have turned to Jell-O from the initial climb. There are also more leisurely hikes to waterfalls if that’s more your speed.

Rich history abounds on the island, and you should make a stop at the birthplace of Alexander Hamilton in Charlestown, dine in a centuries-old sugar mill at Montpelier Plantation and Beach (where Princess Diana famously stayed) and have drinks at The Hermitage, a country boutique hotel in a storybook setting. Or just kick back and watch the clouds dance around the volcano. Whatever you do, the allure of Nevis will beckon you to return again and again.