The women of Few and Far celebrate a decade of breaking glass ceilings. 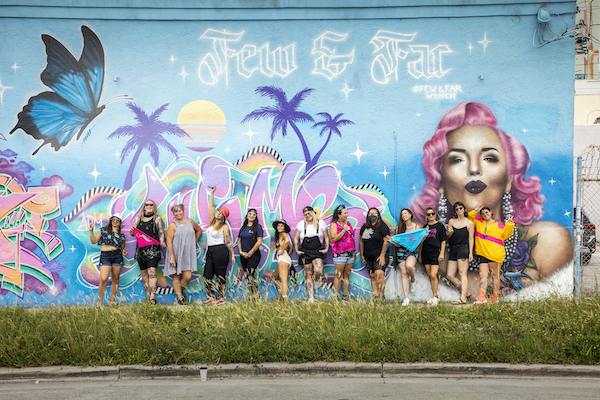 It’s been nearly a decade since avid skateboarder and graffiti artist Meme (pronounced Me-me) decided that she was through with tolerating second-class citizenship in a man’s world.

“For so long we’ve seen women not treated with the same respect as men, even when they do the same jobs,” says the socially conscious street artist. Unhappy with the subculture’s status quo, she knew it was time to shake it up. “So,” Meme says, “I decided to bring some women together to do a mural project in Oakland.” 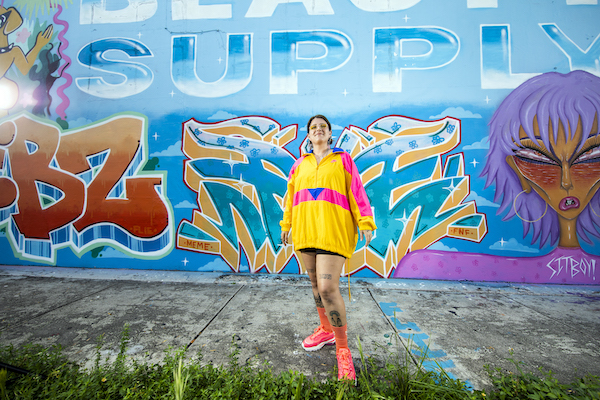 Founder of Few and Far Women, Meme, poses in front of the group’s Wynwood mural.

Seventeen women worked on the mural, all of them artists of varying disciplines. Though their styles, politics, ideas and dispositions varied, they harmoniously worked toward the common goal of creating a singular piece of art that positively enlivened a public space. It was important, trailblazing work that functioned as a coming-out party of sorts, serving notice that the days of women laboring as street artists in the suffocating shadow of men were officially numbered.

Having found both pleasure and empowerment in working together, Meme and her new colleagues decided to formalize their relationship and brighten more cities and towns with their spirited work. They gave their collective the same name they had given their inaugural mural: Few and Far. 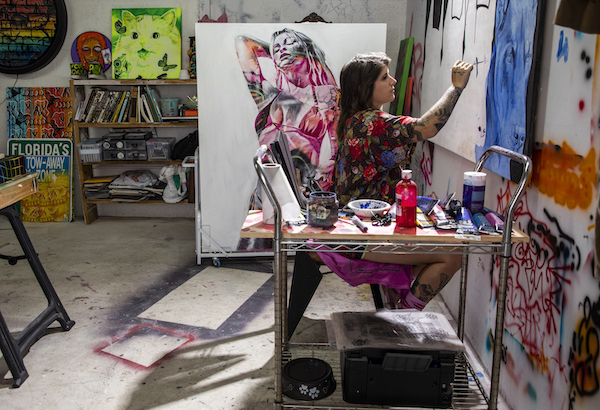 Nico, who founded the community program the Kid’s Mural Project, has taught thousands of Florida students how to design and paint murals.

Today the Few and Far crew boasts a steadily expanding membership of 23 talented women—graffiti writers, street and tattoo artists, skateboarders—who hail from all over the world. Two members, designer and muralist Nico and graffiti artist Delvs, live in Miami.

“I’m kind of lucky to be part of it because in Miami there wasn’t really anyone at the time doing what we do,” says Delvs, whose work often features characters holding records, tapes and boom boxes. “It was basically men, and I think it was just me and, like, three other women—and they weren’t originally from Miami.”

Few and Far’s mission is straightforward: beautify, educate, strive for social justice. With those goals in mind—and always with the permission of the property owners— members have painted murals and otherwise enriched communities with their artwork, outreach programs and skating exhibitions throughout the United States and in nearly 20 other countries.

Few and Far recently celebrated its 10-year anniversary with an exhibition at The Confidante Miami Beach hotel. Titled “10 outta 10,” the exhibition, curated in part by the nearby Museum of Graffiti as part of The Confidante’s nine-month Museum of Graffiti Beachside program, features approximately 30 works highlighting the crew members diverse styles and backgrounds. 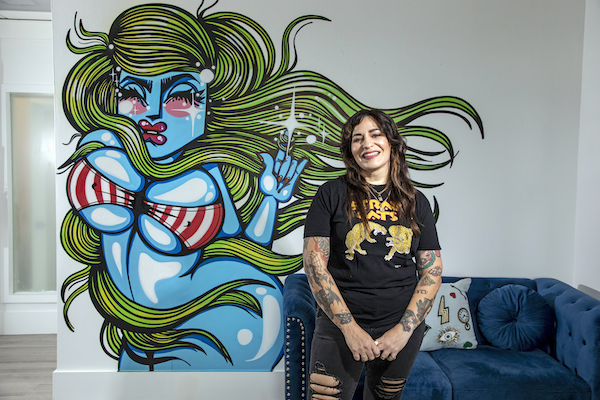 Pulling inspiration from her multicultural background, Delvs incorporates texture, movement and color into her work.

“We thought it would be a perfect fit to feature Few and Far,” says Becca Tash, The Confidante’s director of marketing. “We wanted to feature graffiti because it’s a different medium, and we want to create experiences at the hotel that people can’t find anywhere else.”

The Mid-Beach hotel has an impressive track record of supporting emerging artists and even boasts an ongoing artist-in-residency program—Museum of Graffiti Beachside—which has previously hosted graffiti artists Jel Martinez and David Anasagasti, aka ASG. Guests are invited to immerse themselves in an art-centric stay with self-guided audio tours, rotating exhibitions and interactive installations.

In addition to unveiling “10 outta 10,” the ladies painted a new mural in Wynwood and a half-pipe skate ramp built in the outdoor area behind the hotel.

“It’ll be a pretty broad range of work,” promises Few and Far member and Creative Director Ursula X. Young, an accomplished painter and muralist from Northern California. “There’ll be some of our graffiti artists, some of our street artists. There’ll be some really large pieces. It’ll be kind of full-range.” theconfidantehotel.com / fewandfarwomen.com